Why women like you are spending thousands on diamonds

Cupping the sparkling black diamond pendant reverently in her palm, 57-year-old Marie Wallace made up her mind.

‘I’ll take it,’ she said, handing over her credit card and paying the £4,000 bill without flinching. ‘Is it a gift?’ the shop assistant asked.

While many women would baulk at the idea of buying a diamond — traditionally a symbol of romantic love — for themselves, Marie is one of a growing number doing just that.

Seventy years after jewellers De Beers coined the slogan ‘A Diamond Is Forever’ and launched a fashion for diamond engagement rings that has yet to wane, the sparkling stones are still the world’s most sought-after jewels, but buying them is no longer a male preserve.

An increasing number of women are buying themselves diamonds. Susie Jones (pictured) , 41, a former lawyer living in Surrey has spent more than £15,000

British jeweller Graff Diamonds, whose diamond pieces can sell for well over £100,000, has said that about 25 per cent of its sales are ‘self purchases’ — or women buying their own jewellery.

Perhaps the most remarkable thing about this new trend is that it’s being driven not by executives or rich banker’s wives, but by ordinary, middle-class women.

Marie, a divorced mother of three from South London, is one such shopper, and over the past two years has become a frequent visitor to London’s Hatton Garden, Britain’s diamond centre.

‘I work very hard as a manager in social care, I own my home and I’ve brought up my children,’ she says. ‘My rationale is that I am now allowed to buy myself something pretty.’

Marie wasn’t always so relaxed about lavishing such huge sums of money on herself, however.

‘The first piece I bought was that black diamond pendant three years ago. It caught my eye in the shop window, and was so beautiful that I tried it on, and then asked questions about it, moving towards how much it cost, which was £4,000.’

Initially, Marie dismissed the idea of spending such a sum on a frivolous item. But after a couple of weeks of thinking seriously about it, she went back to buy it.

‘I genuinely agonised, justifying it to myself, thinking that I could cut back in other ways and make sacrifices. But nothing compared to the feeling of finally having the necklace clasped around my neck, with the diamond sitting where it belonged, against my chest.’ 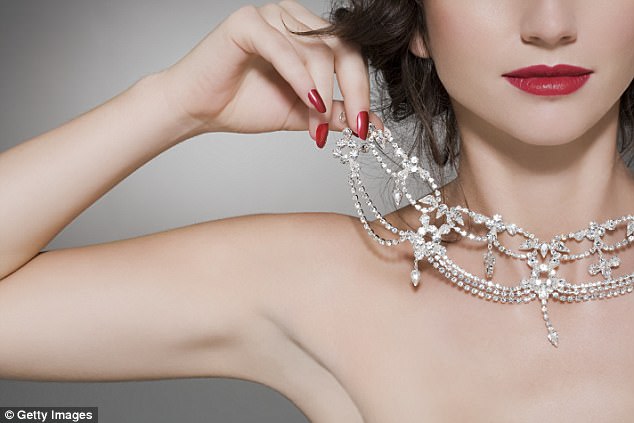 Salim Hasbani, from diamond shop Tresor Paris has witnessed some women choosing to buy themselves diamonds to avoid feeling that their partner owns them (file image)

Marie has subsequently bought further items of jewellery from the same shop, including a ring and set of earrings, saving up the money by reducing the cost of her grocery shopping and forgoing her daily takeaway coffee.

‘There is power in buying such a piece,’ she says. ‘I can see that some people may feel it’s an extraordinary thing to have done, but why on earth shouldn’t I choose to buy myself diamonds?’

Marie is far from the only woman taking the attitude that if they want diamonds, they’ll go out and buy them. ‘Every week we see between 20 and 30 diamond transactions,’ says Salim Hasbani, from diamond shop Tresor Paris. ‘About a quarter of these are women buying themselves a gift. It’s a great measure of equality, although they are still very much stones of romance as well.

‘Buying a diamond always means something, whether it’s an expression of love for a partner or family member, or an appreciation of yourself.’

Nor are all the women treating themselves to diamonds single like Marie.

‘One couple came in and admired a £6,000 pendant,’ says Salim. ‘The man offered to buy it, but his partner said no. “I don’t want you to buy me that, you’ll think you own me,” she told him, took out her credit card and bought it for herself.’

Susie designed herself a ‘£7,000’ celebration pendant and now sells them to others

This reflects the fact that women have more financial power than ever, and control 67 per cent of household spending in Britain. And, with interest rates for savers close to zero, many women believe that putting their money in jewellery is a canny move.

‘Don’t forget, a diamond is always an investment,’ says Salim. ‘You are never throwing your money away — if you get bored, you can have it reset, or even sell it and go on holiday.’

‘We buy handbags and shoes without a second thought, and they are far more likely to get damaged and depreciate,’ she says. ‘Why not a few diamonds?’

Over the past decade, Susie has bought herself numerous pieces of diamond jewellery, including a £2,500 cross necklace, £1,000 earrings and a £1,000 ring studded with diamonds, emeralds, rubies and sapphires. In total, she has spent more than £15,000.

‘Let’s face it, there’s little point in having money in the bank at the moment,’ she says.

‘A piece of jewellery is a joy to own and it will hold its value. I have always loved beautiful things. I’m more of an impulse buyer than someone who mulls it over, but I’ve never spent more than I can afford.’

When Susie’s only child Barnaby was born five years ago, her jewellery shopping reached new levels. ‘My husband, Tristan, did buy me a beautiful pair of diamond earrings. He has superb taste, and I am always grateful for beautiful gifts, but I wanted something more memorable and personal to myself.’

So she designed herself what she calls a ‘celebration pendant’. It’s a stunning 18 ct yellow gold pendant with a bee on the front and Barnaby’s name studded in diamonds on the back. ‘It cost about £7,000, but it was worth it,’ she says. ‘I am a practical person, and buy investment items which I expect to last for many years.’

Some even argue that buying expensive jewellery can be good for a woman’s mental health.

‘If you identify a valued goal, such as a diamond, and set it as a target to save for, it’s empowering,’ says consultant psychologist Dr Frank Ryan, who has been advising Leeds Building Society on spending and saving.

‘It helps you to overcome temptation, and there is evidence that it boosts willpower, so that you become self-disciplined.’ 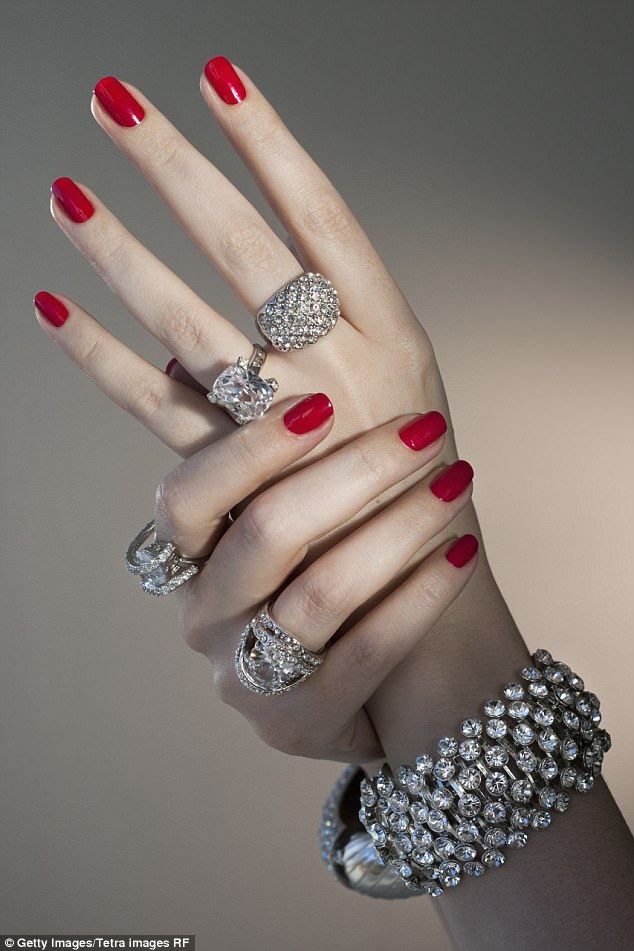 Marie adds: ‘There is nothing so empowering as buying a diamond for myself — I see each purchase as an achievement.’

Bestselling author Sheila O’Flanagan, 59, treats herself to diamonds to mark her successes. ‘For the past two decades, I’ve bought myself a beautiful piece of jewellery every second or third publication date,’ she says.

Her first ring was purchased just after the publication of her fifth book.

‘It was a tiny diamond thing, but it’s precious to me and signifies the point when my books started to make money.

She believes that women need to value themselves more and that treating themselves to expensive jewellery can be a way of expressing their self-worth.

‘Do you ever see a guy beating himself up with guilt about buying that shiny car, which has no purpose other than the joy of owning such an item?

‘Of course not. We should be more like that.’