I can’t wait to visit this loafer’s paradise: Why writer CLIVE ASLET is dreaming of Honfleur in France during lockdown

We’re having breakfast in an old courtyard, half overgrown with vines. Another croissant? Too delicious to say no — all the jam is homemade.

But we can’t linger for ever. We have some important strolling to do. Honfleur, in the Calvados region of Normandy, on the other side of the Seine from Le Havre, is paradise for a flaneur, or loafer.

Hands in pockets, we saunter along the quays of the old port, crowded with the masts of sailing yachts and surrounded on all sides by tall houses hung with slate. About time for a coffee, so we have one beneath one of the orange awnings.

Honfleur is located in the Calvados region of Normandy, France. Pictured is the harbour

What is that higgledy-piggledy building at the end of the harbour? We sashay over the cobbles and learn it’s the Lieutenance, once home to the King’s governor and now the only part of the ancient fortifications still standing. Around the corner, we find that it’s market day and spend far more than we intend on artisanal nougat.

Then our attention is claimed by the venerable and extraordinary wooden church of Sainte Catherine in the centre of the market square. It was begun by local boatbuilders after the end of the Hundred Years’ War. 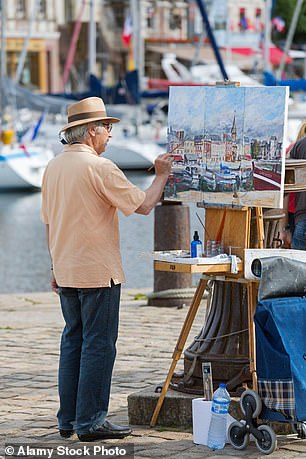 Brush with history: A harbour artist

Blame les Anglais. Honfleur was in bad shape after occupation by English troops but all the available stone was used to repair other towns. So the locals did the job themselves, taking huge trees from nearby forests and employing techniques they used every day for the church. Inside, we feel we are beneath a ship’s upturned hull.

They probably meant to replace the wooden structure with stone but never did. The bells were so heavy that they needed a separate bell tower, in case ringing them brought the whole building down.

Lunch beckons and we wander past ancient salt warehouses of the Quartier de l’Enclos, whose courts and passageways were made from the old castle, to the Rue de l’Homme de Bois — or street of the wooden man.

There’s a restaurant of that name. Last time I was there a fragment of shell cracked from a lobster claw shot across the room and hit a baby in a pram. No damage done and the seafood was delicious.

You can’t go for a dip in Honfleur — although the famous resort of Trouville is just down the coast.

But this was the birthplace of the painter Eugene Boudin, forerunner of the Impressionists, who specialised in beach scenes painted on the spot. It was the era of Empress Eugenie, when ladies carried parasols and a picnic was served on proper table and chairs — just as it should be.