Why you need to visit Portugal’s Comporta

A hot, hour-and-a-half’s drive from Lisbon, down the dusty old Tróia peninsula road, you reach Comporta without even noticing it.

At first sight, the so-called most fashionable resort in Europe, the chicest retreat in Portugal, the Lisbon set’s equivalent of the Hamptons, seems to be hardly anything at all.

Comporta is an hour-and-a-half’s drive from Lisbon. The Cliffs at Gale beach, above

The civil parish of Comporta is actually a cluster of seven even tinier villages and is, topologically, aesthetically and socially-speaking, so discreet, relaxed and low-key it almost disappears under its own radar. Which might explain why Jose Mourinho, Nicolas Sarkozy, Carla Bruni and Madonna — famous people who aren’t keen on becoming daily paparazzi quarry during their summer holidays, are repeat, if mostly invisible, Comporta visitors.

Look closer and a quietly delightful seasonal gentrification of the old fishing village slowly reveals itself.

A warehouse building on the Rua do Secador has been converted into Casa Cultura Comporta, a hipster marketplace of pop-up boutiques and artisan coffee shops.

Opposite, a former stable block is now Cavalariça Comporta, a modern, restaurant with banqueted stalls and industrial chic lighting. In a subtle indication of its summer clientele, Comporta’s excellent minimercado Mercearia Gomes, has a large gluten-free section.

Comporta mornings are wiled away on the stripy-cushioned benches at the Colmo juice bar next door to Manumaya, an elegantly ramshackle emporium specialising in Guatemalan-made hippy items.

But people don’t come to Comporta to shop or star spot. They come for the palpable but indefinable Comporta Bliss — a slowed pace of life, for the distinctive, indigenous food and the pervading Atlantic serenity. But mainly they come for the truly spectacular beach. 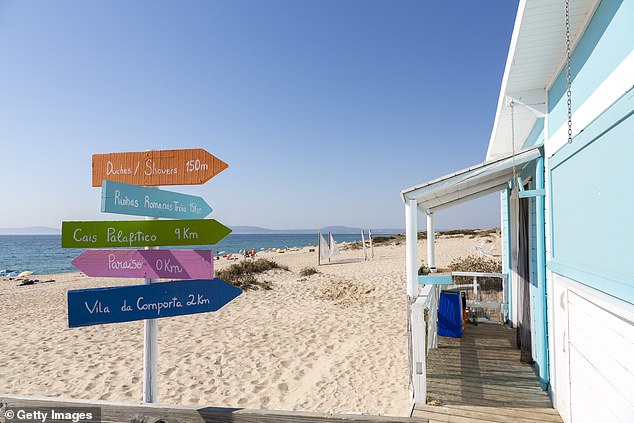 Under the radar: ‘Comporta’s European seashore is equal — arguably superior — to anything on the long-haul, bucket and spade list of Mexican, Thai and Caribbean beaches’ says Simon Mills

Comporta’s European seashore is equal — arguably superior — to anything on the long-haul, bucket and spade list of Mexican, Thai and Caribbean beaches. And Madonna — a part-time Comporta resident while her adopted son David Banda was an apprentice at Lisbon’s Benfica football club —seems to concur.

Last summer, her social media feed showed a video clip — shot by drone, apparently — following the Material Girl as she galloped down the Comporta sand flats like Charlton Heston in El Cid. ‘This is heaven’ read the caption on Madonna’s cinematic post.

A thing of wide, big waved wonder, it is wild and deliciously undeveloped; just a couple of simple, wooden restaurants —Comporta Café and Madonna’s favoured spot, Sal (both heaving in high season) — for lunches. Strictly, no other buildings allowed. For now.

Ever since the fiercely protective Comporta landowners, the super rich Portuguese banking family Espirito Santo, went bust in 2014 the area has slowly, tentatively opened up to developers. Not everyone is happy.

French shoe designer Christian Louboutin, who owned a house in the Comporta region for 15 years has now moved on ‘It’s completely ruined, with ugly developments — too many people, too much electricity, and it’s the land of mosquitoes because of the rice.’

Really? I didn’t notice. Any new building work is skilfully blended into the undulating landscape or hidden away in the forests.

And the mosquitoes? They can be ruthless ‘but after 9pm they are gone,’ a local restaurateur assured me. ‘Then you can eat outside again.’ I was sceptical but checked my watch. At nine on the dot, the mozzies disappeared.

Five years on from its financial ruin, Comporta (the name translates as ‘floodgate’, by the way) aims to preserve its environmental and cultural heritage, growing as a model for sustainably developed tourism while still operating as an agricultural estate. Plans for a sprawling, high-end ‘Aman Comporta’ property on the edge of the village facing the sea were recently rejected by locals.

So, if there are no big hotel chains and no package deal hostelries, where do you stay? Comporta is a house and apartment kind of place where visitors take rental properties through specialist sites like alma-da-comporta.com. There are dozens of fisherman’s cottages, villas and cabins on Airbnb and Trip Advisor.

Want to blow the budget in a discreet and tasteful manner? Try the newly opened 73-room Quinta da Comporta, a wellness ‘boutique’ hotel at Carvalhal or Casas Na Areia, a hamlet of four thatched-roof seaside houses.

Or head to the electric gates at Sublime. Opened in 2014 this former private estate is now a 34-room retreat that includes a 16,000-sq ft garden. It’s contemporary but not flash.

To enjoy Comporta’s incredible Pego Beach in authentic Alentejo style, saddle up like Madonna and rent a horse from Cavalos na Areia.

Stable owner José Ribeira will guide you gently through the forests past rice paddies and over sand dunes before hitting the wide-open thrill ride of white beach and frothing surf. Comporta bliss indeed!