Why you really DO need a flu shot this year: It is much more effective than last season’s

Why you really DO need a flu shot this year: It is much more effective than last season’s – and infection rates rocketed over Christmas

Flu activity suddenly jumped up across the US over Christmas, health officials warn.

Nine states and New York City now have high rates of influenza-like illness circulating, up from just two states (Colorado and Georgia) the week before.

Eleven children have died, according to the Centers for Disease Control and Prevention (CDC). There is no official count for adult deaths yet.

Though these figures are mild compared to last year’s deadly epidemic, which killed 80,000 Americans, doctors say that is no reason to be complacent.

Part of the reason why infections and deaths are lower this year is because the flu shot is more effective against this season’s strain.

Doctors are saying one piece of good news, despite the rocketing infection rates, is that this year’s flu shot is more effective than last year’s.

According to the New England Journal of Medicine, last year’s vaccine effectiveness was 36 percent overall, making the 2017-18 season one of the most severe on record.

During the last full week of January, the CDC reported that one of every 14 visits to doctors and clinics nationwide that week was for symptoms of the flu.

That made it the highest level since the deadly swine flu pandemic in 2009.

Nearly 80,000 Americans died last year of flu-related illnesses, 179 of which were children.

The CDC said 80 percent of the children who died were not vaccinated.

Another positive of the most recent report is that the majority of states – 22 and the District of Columbia – are experiencing low levels of activity this year.

Between December 15 and December 22, just 3.3 percent of outpatient visits were for flu symptoms. By comparison, this time last year that number was nearly six percent.

Health care providers are urging anyone who has not gotten the flu vaccine to visit their doctor or local pharmacy as soon as possible.

The CDC recommends getting the vaccine either in the form of a shot or a nasal spray. For those who choose to go with the injectable, there are two options. 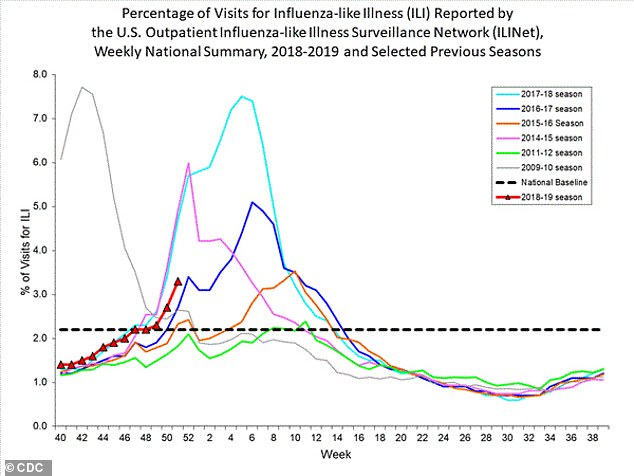 Between December 15 and December 22, just 3.3 percent of outpatient visits were for flu symptoms. By comparison, this time last year that number was nearly six percent

The first is a trivalent vaccine, which protects against two influenza A strains, H1N1 and H3N2, and one influenza B strain.

The second option, the quadrivalent flu vaccine, protects against the same strains as the trivalent vaccine, as well as an extra influenza B virus.

The nasal spray, FluMist, uses live, weakened viruses which are meant to teach the body to recognize and ward off flu strains if you become infected.

The only group of people who are ineligible for the vaccine – shot and spray – are babies under six months old.

Doctors say taking preventative measures is just as important as getting the vaccine such as washing your hands, not touching your face, coughing into your elbow or a tissue and staying home if you are ill.