Why you really NEED to do the Daily Mail’s crossword, according to science

A simple crossword may be better than brain training when it comes to warding off dementia.

But older people tend to be more familiar with crosswords, which also boost brainpower, and may find these puzzles easier to complete.

A new study recruited more than 100 people aged 55 to 95, who had mild cognitive impairment but not dementia, and asked half to do brain-training. 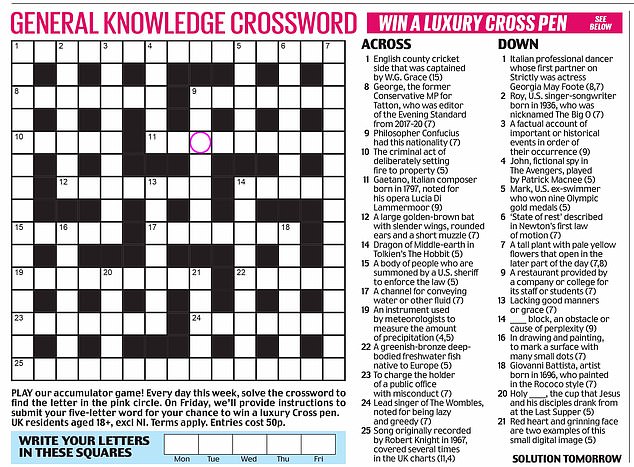 Brain training has become increasingly popular in recent years, aimed at keeping people’s brains active by getting them to play cognitively demanding computer games. But older people tend to be more familiar with crosswords, which also boost brainpower. Pictured: Crossword in the October 27 edition of the Daily Mail

The rest did medium-difficulty crosswords, which they had 30 minutes to finish.

The study involved four brain-training or crossword sessions a week for three months, then four booster sessions in the next 15 months.

Memory problems got slightly worse over the full 18 months in those doing brain training.

But people given crosswords improved when tested on their mental abilities.

HOW CAN I IMPROVE MY MEMORY?

Convince yourself that you have a good memory that will improve

Too many people get stuck here and convince themselves that their memory is bad, that they are just not good with names, that numbers just slip out of their minds for some reason. Erase those thoughts and vow to improve your memory.

The brain is not a muscle, but regularly ‘exercising’ the brain actually does keep it growing and spurs the development of new nerve connections that can help improve memory.

By developing new mental skills —especially complex ones such as learning a new language or learning to play a new musical instrument — and challenging your brain with puzzles and games you can keep your brain active and improve its physiological functioning.

Regular aerobic exercise improves circulation and efficiency throughout the body, including in the brain, and can help ward off the memory loss that comes with aging. Exercise also makes you more alert and relaxed, and can thereby improve your memory uptake, allowing you to take better mental ‘pictures.’

Chronic stress, although it does not physically damage the brain, can make remembering much more difficult. Even temporary stresses can make it more difficult to effectively focus on concepts and observe things. Try to relax, regularly practice yoga or other stretching exercises, and see a doctor if you have severe chronic stress.

Dr D.P Devanand, who led the study from Columbia University, said: ‘This is the first study to compare crosswords and brain-training, and it suggests older people with cognitive impairment might benefit more from doing crosswords.

‘Crossword puzzles are enjoyed by many people.

‘The benefits were seen not only in cognition but also in daily activities and in reduced loss of brain volume.’

Brain-training games have previously been found to boost the mental abilities of people without existing memory problems, in studies of people aged 18 to 80.

But researchers believe crosswords may be better for older people struggling with forgetfulness, as the puzzles are less technical.

This test, marked out of 70, included tasks like naming objects and recalling words.

People doing brain-training, with typical games including remembering images flashing up on a screen, saw their test score fall by 0.4 points over 18 months.

But, surprisingly, people doing old-fashioned crosswords saw an improvement of almost one point in their questionnaire score, according to the study, published in the journal NEJM Evidence.

This was described as a ‘small to medium’ boost in mental abilities, but still significant.

For context, a dementia drug which boosted the average test score by two points – just a little higher than the effect of crosswords – would typically approved by regulators in the US, the researchers note.

The boost in brainpower, which was seen principally in people with more advanced memory decline, could have a significant effect on everyday life for older people struggling with their memory.

Those doing crosswords also scored slightly higher than the brain-training group in a questionnaire on their ability to do everyday tasks like shopping, paying bills, remembering appointments and taking medication.

When it comes to memory loss in older age, experts often use the phrase ‘use it or lose it’.

Using the brain more, for puzzles like crosswords, is believed to reduce the natural shrinkage of the brain, which can reduce memory loss and ward off dementia.

Mild cognitive impairment can be reversed, so that people have mental abilities within a normal range again, but if it gets worse, it can lead to dementia.

The study concludes: ‘Participants with late MCI may have found the (brain-training) games too difficult to comprehend and execute satisfactorily.

‘In contrast, most older adults are familiar with crossword puzzles, which were of medium difficulty in the trial and allowed participants to set their own pace.’

The study asked people to do crosswords on a screen, like those available on the Daily Mail Plus app.