Why you should not give your children hand-me-down toys

Old plastic toys, including lego, dinosaur figurines and dolls, can contain dangerous levels of toxic chemicals, according to the first study of its kind.

Out of a sample of 200 trinkets found in homes, nurseries, schools and charity shops, more than 10 per cent contained high levels of hazardous elements that can be toxic at low amounts and would not be approved for sale today, a study found.

Red and yellow Lego building blocks are thought to be particularly dangerous as they can contain cadmium levels that exceed safe amounts set by the EU Toy Safety Directive, putting youngsters at risk of life-threatening respiratory and kidney problems.

Children are thought to be more at risk of poisoning from hazardous elements as their organs are still developing and they are more likely to put non-edible objects in their mouths.

Lead author Dr Andrew Turner from the University of Plymouth, said: ‘Second-hand toys are an attractive option to families because they can be inherited directly from friends or relatives or obtained cheaply and readily from charity stores, flea markets and the internet.

‘The attractive cost, convenience and recyclability of previously used toys has the potential to create a legacy of chemical contamination for younger children.’

Since 1995 toys must comply with the Toy Safety Directive, which includes safe hazardous element levels, to be sold in the EU. There is no regulation regarding the recycling or re-sale of old toys.

WHAT IS LEAD POISONING?

Lead poisoning occurs when the metal builds up in the body.

Children younger than six years old are particularly vulnerable as such poisoning can damage their mental and physical development.

In severe cases, lead poisoning can be fatal.

Lead poisoning is often caused by exposure to contaminated paint and dust in water, air and soil.

Aside from removing the source of contamination, treatment includes medication that encourages lead removal via urine.

Blood lead levels higher than five micrograms is considered abnormal in children, according to the Centers for Disease Control and Prevention (CDC).

Some 535,000 youngsters in the US are thought to have at least levels this high, the CDC adds.

Lead poisoning levels in the UK are unknown.

The researchers analysed toys found across the south-west of England.

Such toys were made of plastic and were small enough to fit in young children’s mouths; or were made up of removal parts.

Results further reveal 26 of the toys analysed contained high concentrations of hazardous elements if they are exposed over an extended period of time.

Several of the toys even released bromine, cadmium and lead at levels that exceed those set by the European Council’s Toy Safety Directive.

Dr Turner said: ‘This is the first systematic investigation of hazardous elements in second-hand plastic toys in the UK.

‘Second-hand toys are an attractive option to families because they can be inherited directly from friends or relatives or obtained cheaply and readily from charity stores, flea markets and the internet.

‘But while the Toy Safety Directive applies to new products there is no regulation covering the recycling or re-sale of older toys.

‘Consumers should be made more aware of the potential risks associated with small, mouthable old plastic toys or components.

‘Without that, the attractive cost, convenience and recyclability of previously used toys has the potential to create a legacy of chemical contamination for younger children.’

The findings were published in the journal Environmental Science & Technology. 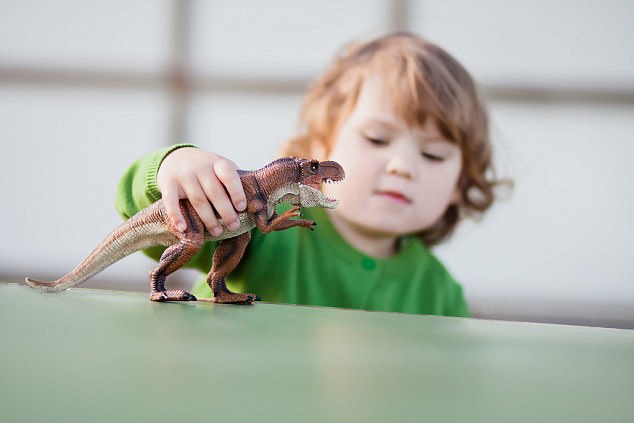 Out of a sample of 200 toys, including dinosaur figurines, more than 10 per cent contained high levels of hazardous elements that can be toxic at low amounts (stock)

According to Roar Rude Trangbæk, a spokesperson for Lego, the company makes products that meet global toy safety standards and campaigned to introduce tough toy safety across Europe.

‘You should not be concerned if you have old bricks that are in good shape and condition. Normal play should be okay.

‘If you do have old Lego bricks that are broken, you should stop using them and dispose of them.’

What are common poisonous elements?

According to the Centers for Disease Control and Prevention, there is no safe amount of lead exposure as the metal can damage nearly every part of the body.

In many cases, lead exposure causes no symptoms, however, some suffer confusion, seizures and even death.

Mercury exposure in humans is normally obtained by eating fish and shellfish or the animals that eat them. Shark, swordfish and tuna contain particularly high levels and should be avoided by pregnant women.

Arsenic is found most commonly in shellfish, rice and fresh produce.

Such poisoning can be life-threatening and cause symptoms including vomiting, vertigo and delirium.