An NHS contract that forces GPs to work Saturdays and weekday evenings contains a loophole that means a ‘physical’ doctor doesn’t need to be available, the country’s biggest medical union has claimed.

Under a drive to make it easier for patients to get appointments, health officials will make GPs offer consultations until 8pm Monday to Friday and from 9am to 5pm on Saturdays.

But the British Medical Association is now disputing whether a GP actually has to be ‘physically’ present for the appointments.

It said the wording of the contract — which it was ‘bitterly disappointed’ at — merely stated that a family doctor had to be ‘available’. The union argued it means GPs don’t need to be ‘actually physically there’.

Dr Richard Van Mellaerts, of the BMA’s GP committee, said that interpretation ‘is what we will be pushing’.

However, NHS England bosses today insisted the contract does not give GPs — who are paid an average of £100,000 per year — a clause to get out of seeing patients in-person.

The contract, which will come into effect from October, says a ‘reasonable’ number of appointments must be held face-to-face.

Campaigners said it is a ‘tragedy’ that patients could face phone call appointments from doctors ‘in their PJs over the breakfast table’.

Before the virus hit the UK, around eight in 10 GP appointments — only half of which are actually with family doctors — took place face-to-face. The figure plummeted to 46 per cent at the start of the pandemic as phone and video call appointments were hailed as a way to reduce the spread of Covid. But despite the easing of restriction, the proportion of consultations that are in-person has only bounced back to 61 per cent

It is the latest dispute in an ongoing row about access to face-to-face appointments.

Before Covid hit the UK, eight in 10 appointments took place in-person. However, the figure plunged to fewer than half during the pandemic.

Even now, the proportion of consultations that are in-person has only bounced back to 61 per cent. 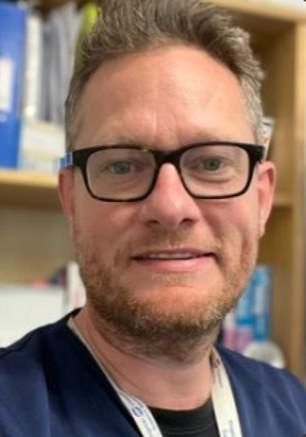 The new NHS contract sets out that primary care networks — groups of GP practices — must draw up plans for delivering appointments at evenings and weekends.

Patients must be able to book the appointments up to two weeks in advance or on the same day, ‘up until as close to the slot time as possible’.

Practices should offer a ‘reasonable’ amount of face-to-face appointments, as well as remote consultations via telephone or video calls to meet patients’ needs.

Nurses, pharmacists and physiotherapists will also be available at more convenient times under the plans.

And doctors with available slots should take NHS 111 calls during the appointment time.

Not all GP surgeries are expected to offer the slots, but primary care networks must offer a minimum of 60 minutes of appointments for every 1,000 patients on their books.

During a webinar yesterday, the BMA’s Dr Van Mellaerts said that the wording of the contract does not make it clear that there needs to be a GP present.

Pulse reported he said: ‘The wording is “GP available” and we would take the view that a GP being available does not necessarily require them to be actually physically there at the time of provision of care during the PCN extended hours.

NHS hospitals have started pleading with families to take their Covid-infected relatives home to free up beds as trusts battle a ‘perfect storm’ of pressures.

The chief medical officer for the Hampshire and Isle of Wight area urged those who have loved ones in hospital to ‘help staff to get them home quickly when they are well enough — even if they are still testing positive’.

Meanwhile, millions of patients in Yorkshire have been told to stay away from A&E departments except in ‘genuine, life-threatening situations’. One ambulance service in the south of England even asked patients to make their own way to hospital.

Officials say the crisis — which is affecting every area of the health service — is being driven by a combination of a high level of Covid admissions and staff absences.

Health bosses have warned that the situation is already having a ‘knock-on effect’, jeopardising attempts to tackle the backlog of 6.1million patients whose treatment was effectively ground to a halt because of the pandemic.

Government statistics show 20,000 Covid patients are currently in hospital — meaning trusts are now busier than they were in January at the height of the Omicron wave.

‘We will be seeking clarification on this but that is our position and that is what we will be pushing.’

Dr Van Mellaerts added: ‘In some ways, we need to decide whether or not we actually go back and ask for clarity on that just in case there is clarity in a way that we prefer not to have.

‘We’re going to establish that and then we’ll come back with some up-to-date guidance.’

A spokesperson for the BMA insisted that GPs want to provide convenient and safe appointments for patients.

They said: ‘With widespread workforce shortages, it’s not safe for GPs and other staff to spread themselves even more thinly to cover increased appointment slots.

‘Practices will need therefore to make best use of the limited workforce and mix of professionals they have available, to come to a solution that is safe for both patients and staff.

‘The current guidance from NHS England is open to interpretation and we are seeking clarification over what exactly is required.’

An NHS spokesperson told MailOnline all primary care networks must ensure a GP is available to see patients face-to-face.

A health service spokesperson said: ‘From October all Primary Care Networks will be required to ensure a GP is available to see patients face-to-face on Saturdays between 9am and 5pm, as is already the case in many parts of the country.’

Dennis Reed, the director of Silver Voices, a campaign group for the over-60s, told MailOnline he is getting ‘more and more frustrated with the way the BMA is trying to wriggle out of face-to-face appointments’.

He said there is ‘no sign’ of an increase in in-person consultations, despite calls from the Health Secretary and patient groups to offer more.

Mr Reed said: ‘Patients expect professional work and to suggest the appointments can be a call with a doctor in their PJs over the breakfast table is a tragedy.

‘Patients want to see doctors in their practice with access to the appropriate equipment and tests.

‘The BMA is thumbing its nose to the Government, which has been remarkably quiet in recent weeks on the whole issue which is encouraging them. It needs to take action.’

He added: ‘We’ve heard so many stories of misdiagnosis because of remote consultations. Doctors say face-to-face appointments are safer so their approach bemuses me.’