Why your car loan could prevent you getting a credit card

A bank customer with an exemplary borrowing record has been turned down for a credit card by her bank because she had taken out a car loan.

Debra Westowski was told by her bank, Santander, that she couldn’t have a credit card even though she had paid off her mortgage and had a good income.

Usually people in her position have little trouble getting credit as they have proved they manage their debt sensibly, only using credit for emergencies or for extra protection when buying online.

But Debra, 56, was turned down because Santander was uneasy that she had a loan to pay for her £26,000 Mini Cooper S.

Worried: Debra Westowski was turned down for a credit card by Santander despite having an exemplary borrowing record

This strict approach raises the prospect of other drivers running into trouble if they want a credit card, loan or even a mortgage.

The car finance industry is booming, with drivers borrowing a record £31.6 billion to buy new and used vehicles last year.

According to latest figures from the Finance & Leasing Association, the industry trade body, drivers took on £140 million of debt a day, buying more than 254,000 cars in September.

The boom has been fuelled by leasing arrangements, where you pay a monthly fee for several years with the prospect of owning the car at the end of the deal.

Debra pays £349 a month on her car loan, but has no other debt. She has never missed a payment on previous store or credit cards.

Before retiring after 27 years in the police force last year, she paid off her mortgage and had built up a healthy savings balance.

She also took on a part-time job delivering car parts to supplement the £1,200 a month pension she gets from the police.

Debra, from Maldon, Essex, applied for a Santander 0 per cent credit card in April to transfer £4,000 she had on a Barclaycard and avoid interest.

However, she was told by the bank — with which she has a current account — that she didn’t fit its ‘business criteria’. 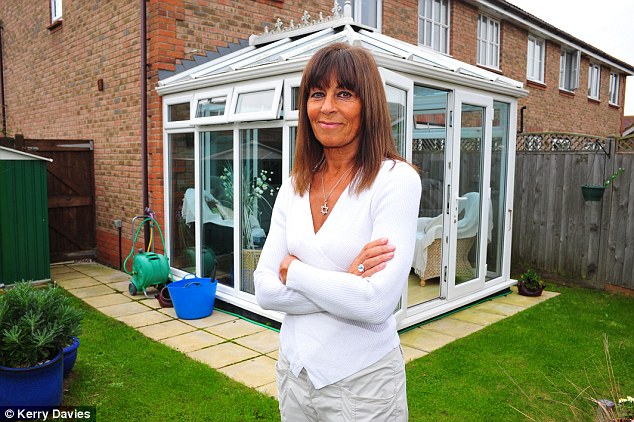 Exemplary record: Debra pays £349 a month on her car loan, but has no other debt. She has never missed a payment on previous store or credit cards

She contacted Experian, the credit reference agency, which said it rated her as ‘excellent’. Debra still wanted a credit card with a 0 per cent rate for emergencies. So she dipped into her savings, paid off the £4,000 Barclaycard debt and closed that account.

She reapplied to Santander, but was rejected again. Santander told Money Mail it refused Debra because her level of debt — the £26,000 car loan — was high compared to her income.

Yet Debra says she can comfortably afford her loan — after bills are taken into account, she has at least £800 a month to live on.

Debra says: ‘I’m really worried I will never get credit again. Of course, I’m earning less now that I am working part-time, but I’ve paid off my £700-a-month mortgage.’

A Santander spokesman says: ‘Santander lends money responsibly. It is not in our interest, or that of the customer, for us to advance money customers may struggle to repay.’

Justin Modray, of adviser Candid Financial Advice, says: ‘This is worrying because so many people buy cars on credit these days.

Most of them won’t realise that can scupper their chances of getting a credit card further down the line.’

Representative example: If you spend £200 at a purchase interest rate of 18.9% p.a. (variable) your representative rate will be 18.9% APR (variable). Credit limits and terms may vary based on your individual circumstances. Balance transfer offers and introductory fees limited to transfer made with 60/90 days of account opening. See product specific T&Cs. * must spend £1k within 3 months