Widow, 85, discovers her husband led a double-life as a secret agent for 75 years

A widow who went through her husband’s secret papers after his death was shocked to discover he was leading a double life as a spy against the Nazis.

Audrey Phillips, 85, was married to Glyndwr for 64 years in Trowbridge, Wilshire, and knew him as a family man and civil engineer.

Audrey Phillips was married to her husband Glyndwr for 64 years without realising he was leading a double life as a spy, pictured with their children in the 1980s Mrs Phillips, an 85-year-old great-grandmother of three, said she was ‘astonished’ to read about Glyn’s clandestine life in 2017

Mrs Phillips cleared his paperwork and found he had written his life story as a spy which started in the 1940s.

The documents showed he had become a spy when he was pulled out of school in 1944 because of his photographic memory and began to work for Operation XX.

The operation, otherwise known as the Double-Cross System, was a counter-espionage and deception project which saw Nazi agents captured in Britain being used to send misinformation back to Germany.

Mrs Phillips, a great-grandmother of three, said she was ‘astonished’ to read about Glyn’s clandestine life in 2017, after he died from Parkinson’s in January 2015, aged 83. 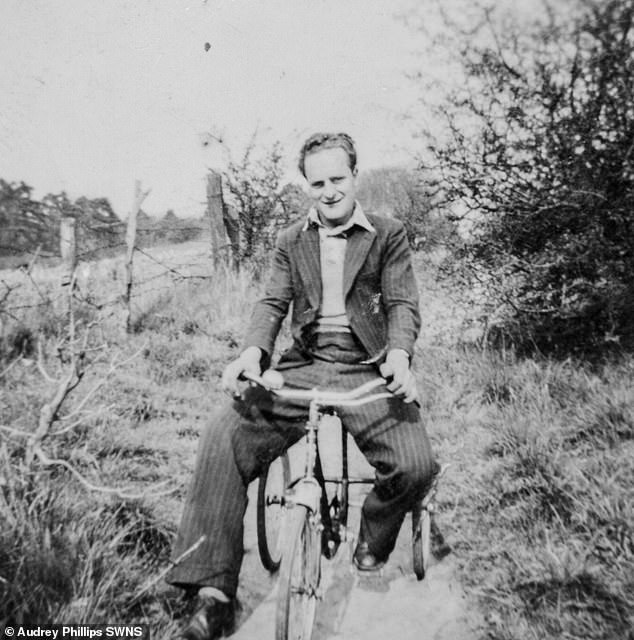 The memoirs of his time as a spy during a fascinating period of British history are being published in a book Operation XX and me: Did I have a choice? 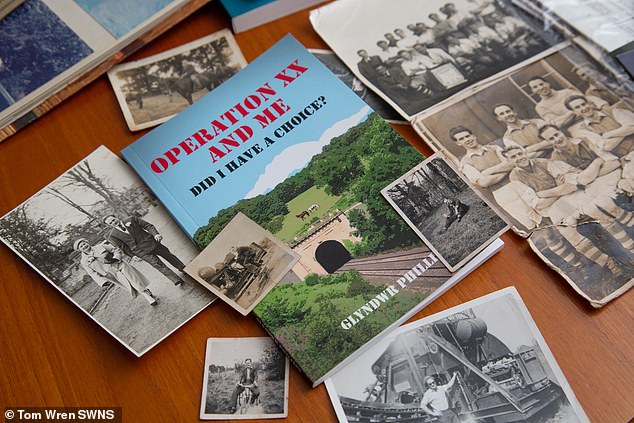 After he died in 2015, the widow went through his documents and found out he was recruited by MI5 as a schoolboy 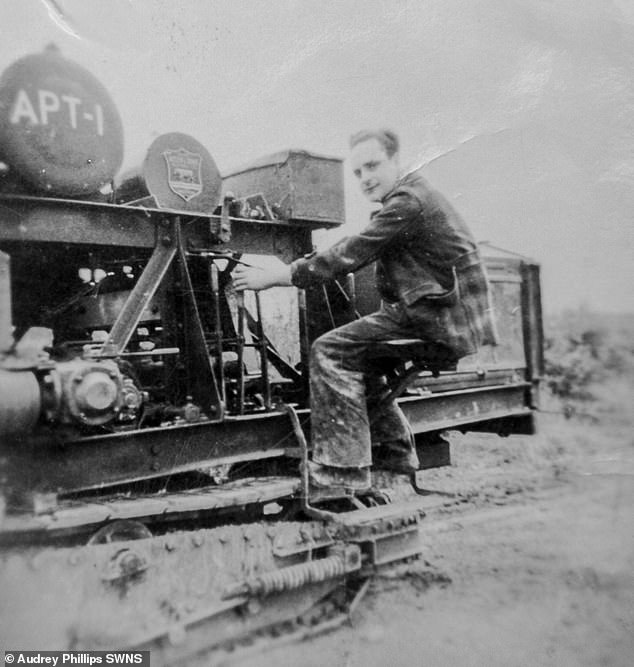 The operation were looking for recruits who were interested in horses, small for their age, and had a photographic memory

She said: ‘I was completely oblivious. I have so many questions now that will probably never get answered. Why did I not know?’

In Mr Phillips’s story is details of the training he underwent which involved him having to crawl through concrete pipes 18 inches wide to talk to German POWs.

He was recruited by an MI5 captain and continued working in espionage after WWII for most of his adult life, and only his father knew of his clandestine activities.

Mrs Phillips, a retired home economics teacher, has now published her husband’s memoirs in a book titled ‘Operation XX And Me: Did I Have A Choice?’.

She said: ‘I never noticed any time that he was away for a long period, as he used to work away from home quite a lot. 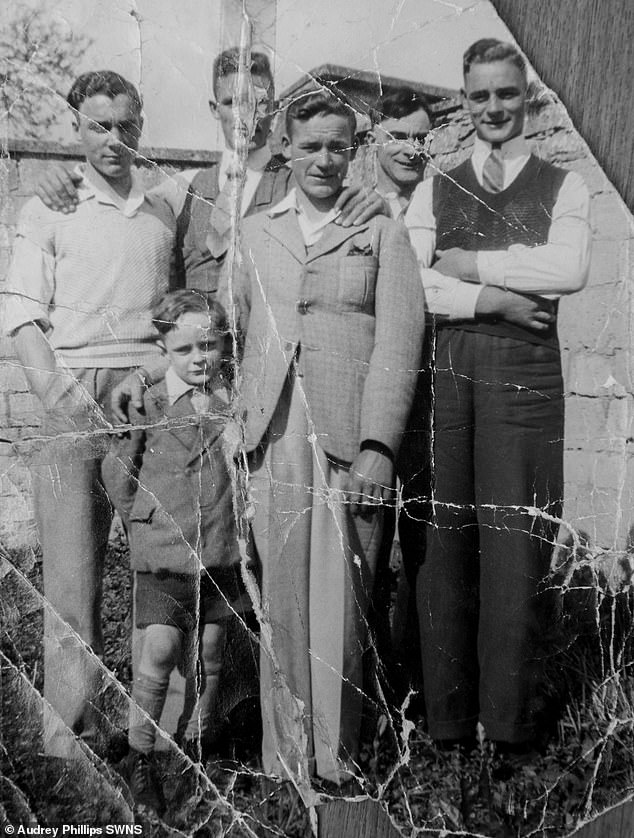 Mr Phillips (pictured as a boy, second left) wrote: ‘I look back now and think about what sort of life [my wife] must have had and how she put up with me.’ 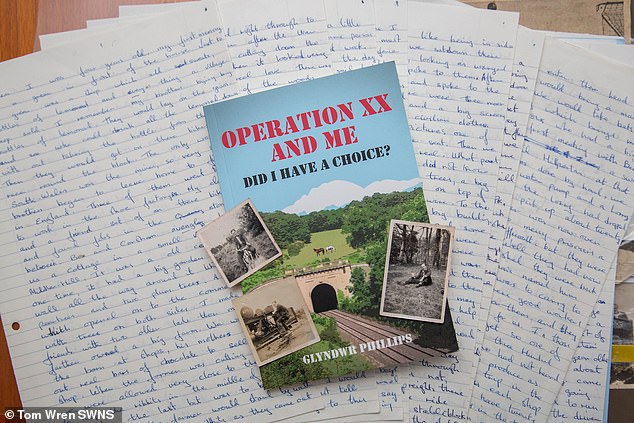 ‘He wrote in his story that one of his missions was in a place called Portwrinkle in Cornwall. I couldn’t believe it when I read that.

‘I didn’t even know where Portwrinkle was. I had to look it up.’

The only person who knew of her husband’s involvement with British intelligence was his father, who was approached by a man known only as ‘the Captain’ for permission.

The teenager was one of 20 young boys around the country recruited by the security agency for the secretive operation.

Mrs Phillips said: ‘He kept the papers in a drawer at home, and occasionally would get them out to top up his writing, but he never invited me to read them, so I never did. 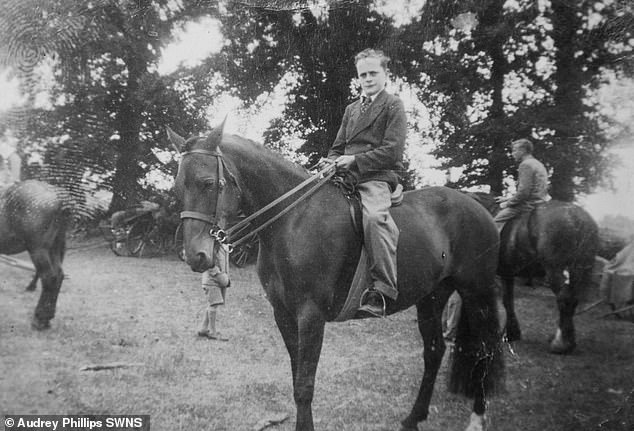 He was recruited by an MI5 captain and continued working in espionage after WWII for most of his adult life, and only his father knew of his clandestine activities 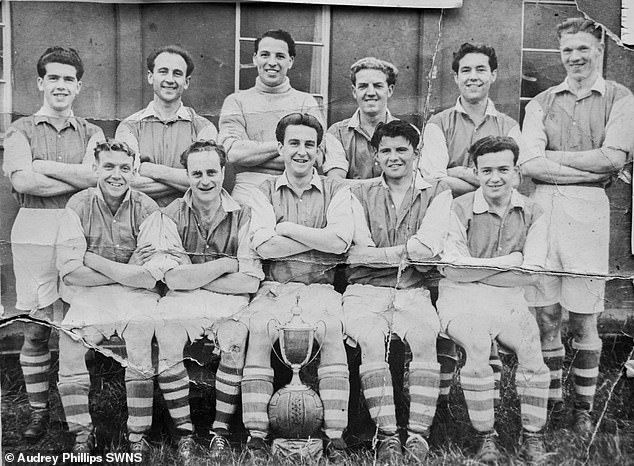 ‘They were looking for someone who was interested in horses, small for his age, and had a photographic memory.’

The young Mr Phillips attended the gym two afternoons a week where he learnt self-defence, and was made to crawl backwards through a concrete pipe, ‘fifteen feet by eighteen inches’.

The elusive character of ‘the Captain’ appeared three more times during Mr Phillips’s adult life, each time with another mission for him.

In his notes, Mr Phillips recalls asking ‘the Captain’: ‘Do I have a choice?’

On one occasion, when he was 18 or 19 years old, Mr Phillips was paid £20 by ‘the Captain’ for capturing two spies, the equivalent of two weeks’ wages at the time.

His widow said: ‘It has made me wonder, did he get paid for any other jobs? And if so, where did it go?’

She also recalls another occasion when officers showed up at their house, and her husband began shouting at them and pushed her into another room.

Mrs Phillips added that her ‘stomach churned a bit’ when she read the context to Glyn’s odd behaviour that night – including ‘the Captain’ securing him a police apology.

And when he wrote about a later job in Portwrinkle, Cornwall – a place that Audrey was shocked to discover he had been to – Glyn even admits asking ‘the Captain’: ‘What do I tell the wife?’ 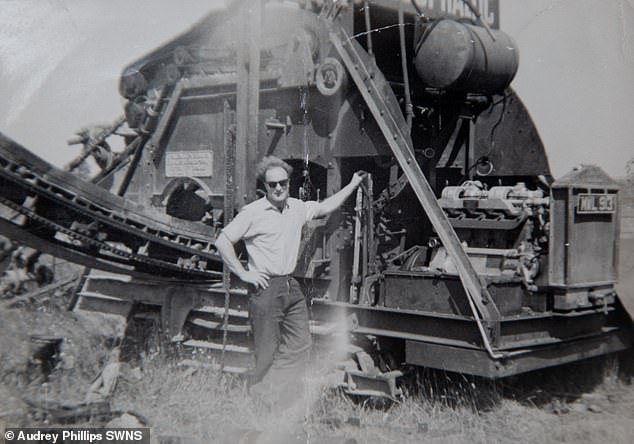 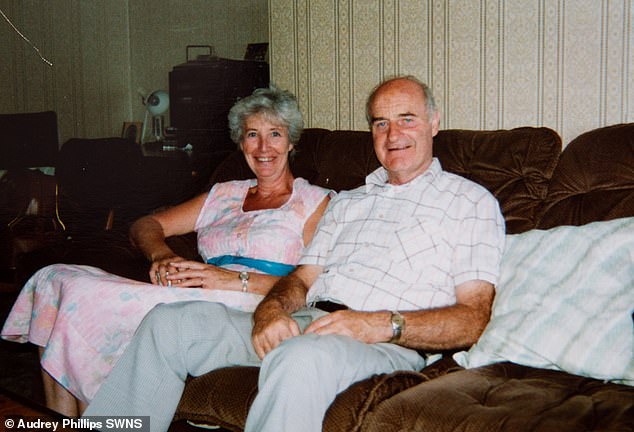 He writes in his story: ‘I look back now and think about what sort of life she must have had and how she put up with me.’

Audrey said: ‘I don’t think he was a particularly private man, usually – but I suppose he compartmentalised things.

At the age of 18 or 19, Mr Phillips was working a job on a calf dozer for a plant firm, filling in trenches on farmland up to four miles long, when he was approached one day by an associate of ‘the Captain’.

He recalls that the man offered him a ‘free pass’ out of serving for two years in the army if he apprehended a spy feeding information from inside an army camp near to where the teenager was working.

The mission involved Mr Phillips breaking in to the camp and keeping an eye on the man believed to be the spy. He was paid £20 by the Captain in exchange for the information.

In the spy’s final documented encounter with ‘the Captain’, he was working at a dog training centre in Upavon in Wiltshire, building dog kennels.

Mrs Phillips recalls: ‘All that he told me about that was that the job was good, the weather was good, and the canteen was good.’

But in his book, he writes that the familiar face of ‘the Captain’ – by now a Commander – approached him while he was on this job, and offered him a refresher course on unarmed combat.

Mr Phillips was told that he would be taken to Cornwall just days later, to meet a boat which was due to arrive to pick up a ‘load of arms’.

The Commander told him: ‘When loaded, it will be intercepted by two gunboats. The problem is, one of our men is on board and we have to get him off before the boat is boarded.’

Glyn’s job, the Commander told him, was to: ‘Put out the searchlight on the gunboat on the right.’

This was to allow a small rubber dinghy to glide along the right-hand side of the boat in order for the Intelligence Force man on board to jump into the water and climb into the dinghy.

Glyn recalls enjoying a ‘pleasant’ drive down to Cornwall, where the Commander left him with a pistol in hand and wished him good luck.

The job was a success without a shot ever being fired – and this is where Glyn’s written story ends.