Widow files $1million lawsuit against woman who had an affair with her husband, claiming negligence

A widow is suing the mistress of her dead husband, claiming if she had been more careful about hiding their affair, her own ex-husband husband would not have killed the man in a jealous rage.

The furious woman in Oregon wants to claim $1million in ‘wrongful death’ damages after her unfaithful spouse was beaten to death and stabbed.

Than Duy Kim of Albany allegedly clubbed Mitch Xuan Dong, 50, with a baseball bat and knifed him at a nail salon on December 5 last year.

Than Duy Kim, 49, of Albany allegedly clubbed Mitch Xuan Dong with a baseball bat and knifed him on December 5 last year

Widowed Lang Dong claims in the lawsuit that Anh Tram Gia Phan was negligent of her late husband when she clumsily got discovered having sex.

The incident took place when Dong was caught in the act at Phan’s Corvallis Nail Spa.

A week after sustaining the injuries the unfaithful man passed away.

Phan and Kim divorced in 2009 according to court documents however the pair still shared a home.

Dong claims that the mistress ‘knew or should have known’ Kim, 49, currently being held at Benton County Jail was a ‘prone to extreme violence’, states the lawsuit.

The document signed September 27, also alleges the ex-wife knew he was involved in ‘criminal enterprises, including but not limited to money laundering’.

Papers also say Kim had a gun on him during the assault and that Dong plans to seek ‘punitive damages’ from him too for his ‘deliberate cruelty’. 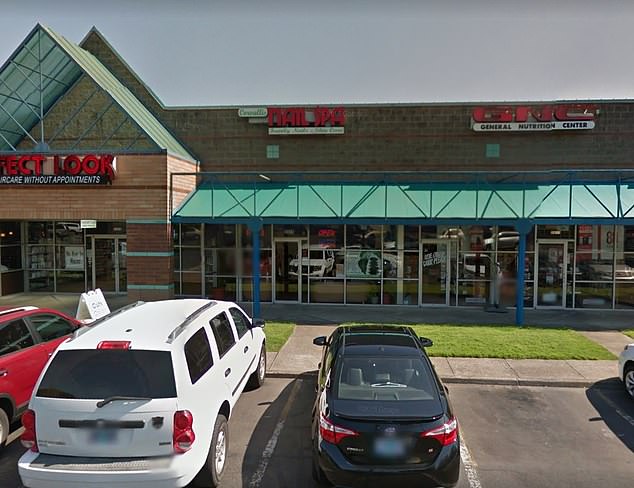 The incident took place when Dong was caught in the act at formerly married Anh Tram Gia Phan’s Corvallis nail salon. A week after sustaining the injuries he passed away

Dong claims her husband had a least another good 28 years of life in him as he was in good health.

The breakdown of the $1million is for up to $500,000 (non-economic) damages and the other half to be paid in money.

Corvallis Nail Spa Inc is also named as a defendant in the lawsuit.

Kim has pleaded not guilty after being accused of murder and is preparing to head to trial.

She had been married to her husband 30 years and he immigrated to the United States from South Vietnam after fleeing to a refugee camp in a small boat according to his obituary.

He left behind two children – whose ages are not mentioned – and his wife is seeking costs for medical expenses as well as the funeral.

The rest of the money is for loss of ‘society, companionship and services to herself and their children, according to the lawsuit filed by attorney Larry Stuber.