Widow is suing the government for $1.2million for loss of sex after husband’s death

Widow whose husband died after botched medical treatment sues the government for $1.2MILLION for ‘loss of sex’

The widow of a man who died after suffering brain damage during hospital treatment is suing the government for $1.2million over a loss of sex.

Cara Finnegan is suing Queensland Health after her husband and the father of her four children died as a result of a botched medical treatment.

She says in addition to the distress Jamie’s death has caused her, she experiences nervous shock and has suffered a loss of ‘consortium’, or sex, with her childhood sweetheart.

Jamie’s mother Daphne Finnegan told A Current Affair her son is worth more than what Mrs Finnegan is asking for.

Cara Finnegan is suing Queensland Health for $1.2million after her husband and the father of her four children died as a result of a botched medical treatment

‘If we’re talking about conjugal rights he’d be worth about $3 million, he’s an Italian stallion, mate,’ she said.

Jamie was left brain-damaged and required around-the-clock care after a treatment at Brisbane Hospital went wrong six years ago.

At the time, the family for a $10million settlement, but six members are now seeking reparations since his death in 2018. 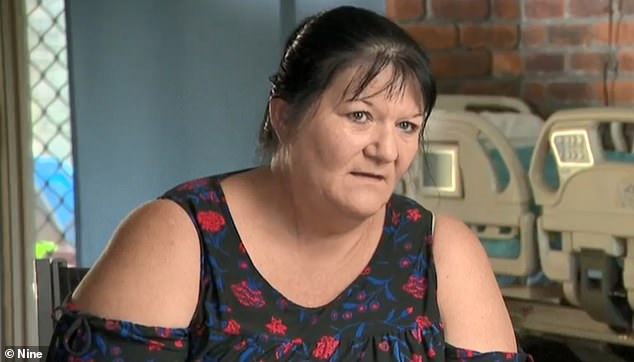 Of the $10million, Jamie’s mother said there is still about $8million left.

This money has been placed in trust funds for his four children to access when they turn 25.

Some of the other claims include Jamie’s brother Wylie, who says he developed an addiction to methamphetamine after his brother’s death and another brother, Jayden, who has offered to settle for $323,000.