Despite her clear love for her husband, Joanne Rogers did not want him to be made into a ‘saint’. She said there were many other ‘Fred Rogers’ out in the world and she would rather he was remembered for his sense of humor

The widow of legendary broadcaster Fred Rogers has revealed how she asked the creators behind a new film on her husband’s life not to make him out to be a saint.

Joanne Rogers, 91, spent 50 years married to the popular American television personality, who died at the age of 74 in early 2003. The story of her husband’s encounter with a cynical investigative journalist in 1998 forms the basis of a recently-released film: ‘A Beautiful Day in the Neighborhood‘.

The journalist, Tom Junod, met with Mr Rogers (played by Tom Hanks in the film) to try and find the darker side of the notoriously cheerful public persona. Instead, he found a life-long pen pal and friend.

It was revealed, this week, that Mrs Rogers had one request of the movie’s creators when she gave them her blessing.

Micah Fitzerman-Blue, who wrote the film with Noah Harpster told the Los Angeles Times her sole demand was ‘that we not treat her husband as a saint’.

He said the widow was more keen to share just how funny her husband was. 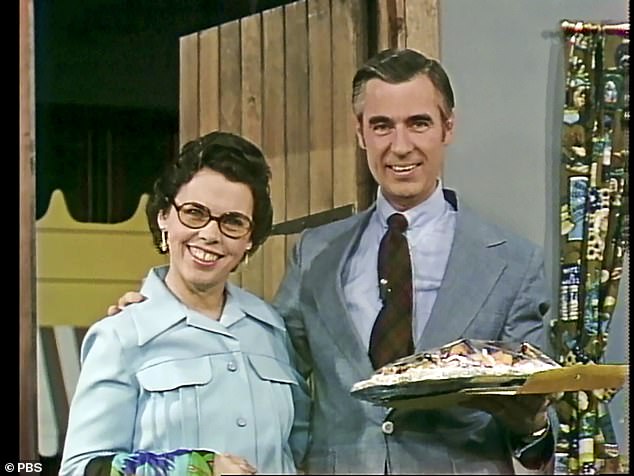 Joanne Rogers, wife of Fred Rogers, on the set of Mister Rogers Neighborhood – which the legendary broadcaster was a host of

Her comments were revealed in a feature article on the widow, who has despite being an accomplished pianist in her own right, lived much of her married life (happily) in the shadow of her husband’s fame.

She said after his death, her husband’s popularity did not seem to wane, with many propping him on a pedestal beyond the average person’s reach.

‘He’s out there now as somebody who’s somehow way above all the rest of us,’ she said. ‘People invariably say, ‘Well, I can’t do that, but I sure do admire him. I would love to do it.’ Well, you can do it. I’m convinced there are lots of Fred Rogerses out there,’ she was quoted as saying.

Ahead of this month’s film premiere in Rogers’ native Pittsburgh, where much of the movie was shot, Mrs Rogers met with Los Angeles Times film, celebrity and pop culture writer Amy Kaufman.

The encounter forms the basis of the article in which through her engaging personality she offers an insight into the life she shared with her late husband.

The writer and widow had developed a friendship, ever since they first spoke in a brief 20 minute phone conversation last year, ahead of a documentary that touched on how ‘Mister Rogers’ made goodness a desirable trait.

Mrs Rogers, with a tech savviness that belies many a nonagenarian, tracked the writer’s email address down kindling a sense of camaraderie between the two.

In their correspondence the widow revealed her fondness for pet names, frequently referring to Ms Kaufman as ‘dear, dearie, dearest and honeybun’.

She book-ended her emails with ‘sent from my iPhone’ tags and red and pink heart emojis.

She sends the emails from her Macbook Air – the same device she uses to keep ‘up-to-date’ with the latest on pop culture.

‘The movie stars all look alike to me now. I can remember their names — Aniston and this one and that one. I still haven’t figured out what it is that Kardashian does,’ she tells Ms Kaufman.

‘What I’ve enjoyed most is Lady Gaga and what she’s done with her talent. How she can do anything she wants by just being crazy, funny-looking in outfits, you know? I think that is really smart.’

In text messages to the writer Mrs Rogers would also use her own avatar, a ‘Memoji’ complete with the same curly mop of gray hair that adorns the widow’s own head, glasses and even the gap between her front teeth. 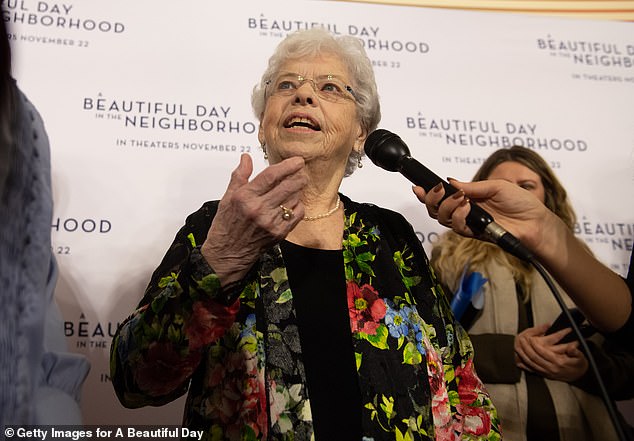 Joanne Rogers, wife of the late Fred Rogers, speaks to reporters at the premiere of ‘A Beautiful Day in the neighborhood’ on November 20, 2019

A year on after their first correspondence, when the two women finally met, Ms Kaufman found the elderly woman to be just as warm in person.

The writer described the woman, who greeted her from the door of her Schenley Park home of 38 years, as someone who despite her advanced years was lithe on her feet with a sharp mind, and fondness for hugs.

‘I’m a hugger,’ she tells Ms Kaufman as she gives her a hug – the second one within minutes of meeting in their first real-life encounter.

‘I felt so badly for [Joe] Biden when they were going at him about hugging. I said, ‘My gosh, I hug everybody.’ I know lots of men who hug people. He’s an old man. He’s a hugger from way back.’

As they step into the apartment that Mrs Rogers has lived in since her husband’s death, from stomach cancer 16 years ago, it is clear Fred Rogers’ memory lives on.

The writer describes the reminders of the couple’s life, their love, and Fred Rogers’ place in the public eye, dotted throughout their once shared space. Magazine covers with his name, framed and faded family photos and endless awards that Mrs Rogers no longer remembers what they were for.

A tote bag hanging off her favorite chair holds most of the letters from their early years dating.

But despite her clear love for the man she married over half a century ago, Mrs Rogers has no desire to see him continually put on a pedestal beyond anyone’s reach.

When a new line of Mister Rogers sweaters came out, she told the writer they sound comfortable but she had no desire to get one: ‘I’m very warm-natured and sweaters make me too hot and itchy.’ 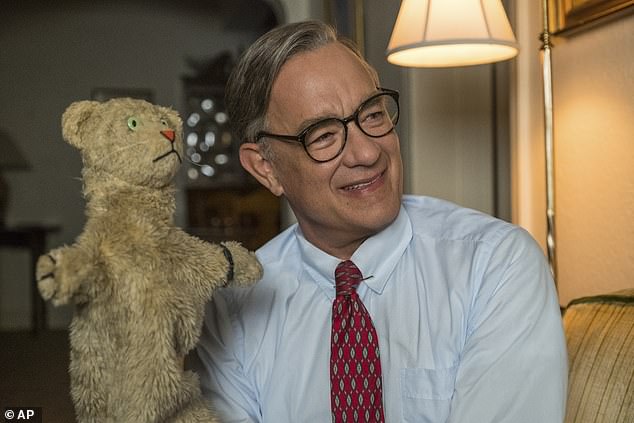 This image released by Sony Pictures shows Tom Hanks as Mister Rogers in a scene from ‘A Beautiful Day In the Neighborhood,’ in theaters on November 22. One of Mrs Rogers rare requests to the film-makers was not to allow the actor to portray her husband as  saint

She also told movie-makers not to allow actor Tom Hanks to turn him into a saint.

Aside from this request, there was little else Mrs Rogers, a key figure in the development of the Marielle Heller-directed film, asked the movie creators to do.

There was the one moment Maryann Plunkett who plays here in the film shouted: ‘watch out, buster!’

‘And I’ve never in my life said ‘buster’ to anybody,’ she said with a laugh, as she explained how she had asked the filmmakers to change the line.

And while the film gives a good window into aspects of their life, Mrs Rogers said not everything made it in – in particular her husband’s tendency to crack the odd dirty joke or two.

If the couple was out at an event that turned out to be bland, he had a go-to way of making her laugh: passing gas.

‘He would just raise one cheek and he would look at me and smile,’ she said, cracking herself up.

‘He was not prissy. Not at all,’ she said. ‘He ran around the house in the droopiest drawers. They were at least three sizes too big but they were comfortable, and he liked them.

‘It didn’t matter if there was company here — he’d wear those and a T-shirt. He was not a modest person.’ 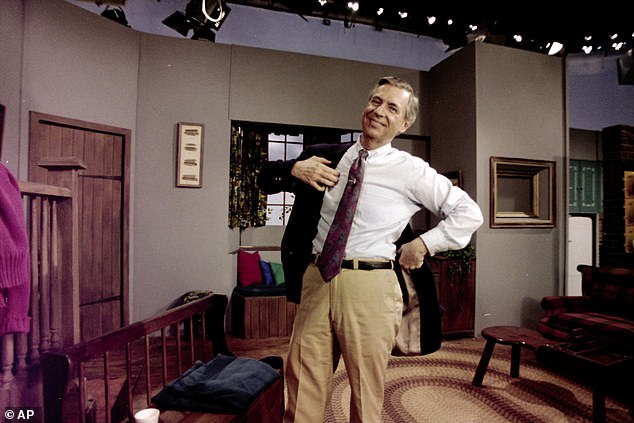 One thing he did keep on the down low was his political and religious leanings.

Mrs Rogers described her husband, an ordained Presbyterian minister, as someone who felt being impartial was important and for this reason he never talked about religion on his program.

A registered Republican she said he was ‘very independent’ in the way he voted.

‘But he just didn’t talk about it because he didn’t want to lose the children,’ she said.

When Fred was alive, she said she felt an obligation to keep her political leanings private – but in recent years this has changed.

Mrs Rogers still doesn’t know who she’s going to vote for in 2020, but said she’s more political now than she’s ever been.

‘Trump changed it,’ she said. ‘And I want to vote for whoever is going to beat Trump.’

While her husband was still alive, Ms Rogers was largely in the shadows. An accomplished concert pianist in her own right she never resented his fame and chose instead to focus on her art and out of his limelight. 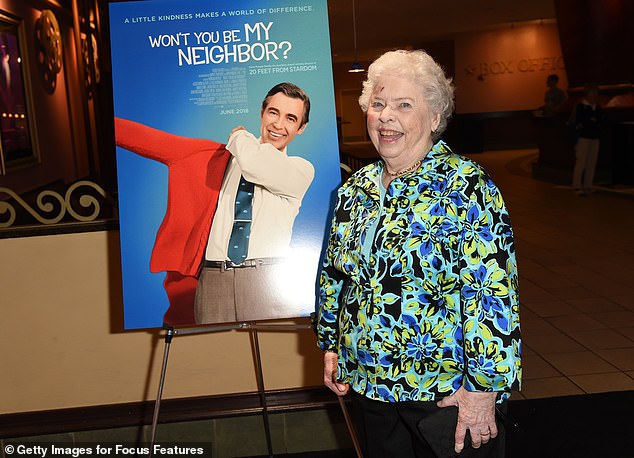 Joanne Rogers attends a special screening of ‘Won’t You Be My Neighbor?’ on May 23, 2018 in West Homestead, Pennsylvania

Since his death, however, she is one of the primary stewards of her late husband’s legacy – the chair emerita of Fred Rogers Productions and the Honorary Chair of the Fred Rogers Center for Early Learning & Children’s Media on the Saint Vincent College campus.

On the 50th anniversary of his seminal kids program in 2019, she participated in a PBS special about Fred, helped to promote a commemorative postage stamp with his face on it and was also part of Morgan Neville’s hit documentary ‘Won’t You Be My Neighbor?’

At the movie’s premiere, her work and place as Fred Rogers’ wife earned her a standing ovation, as she entered the auditorium.

At the end of the screening well-wishers flocked around her – including Mayor Bill Peduto – before she was taken to a waiting car that would escort her home at the end of what had been a long and eventful day.

Ms Kaufman followed behind, ‘not ready to say goodbye’.

‘I love you,’ she told the writer as they hugged again. ‘Bless your heart.