A widow used DIY skills she was taught by her late husband to renovate a 19th century Methodist chapel and transform it into a £450,000 dream home.

Jayne Fowler, 59, decided to buy the £155,000 property in Salisbury, Wiltshire, after walking past an estate agents window while housesitting for a friend two years ago.

Within a week the former school administrator set to work and project managed the renovation for the next 12 months.

She spent £135,000 renovating it, including a costly re-roofing. Her new home was finished last July and she has been living in it ever since. 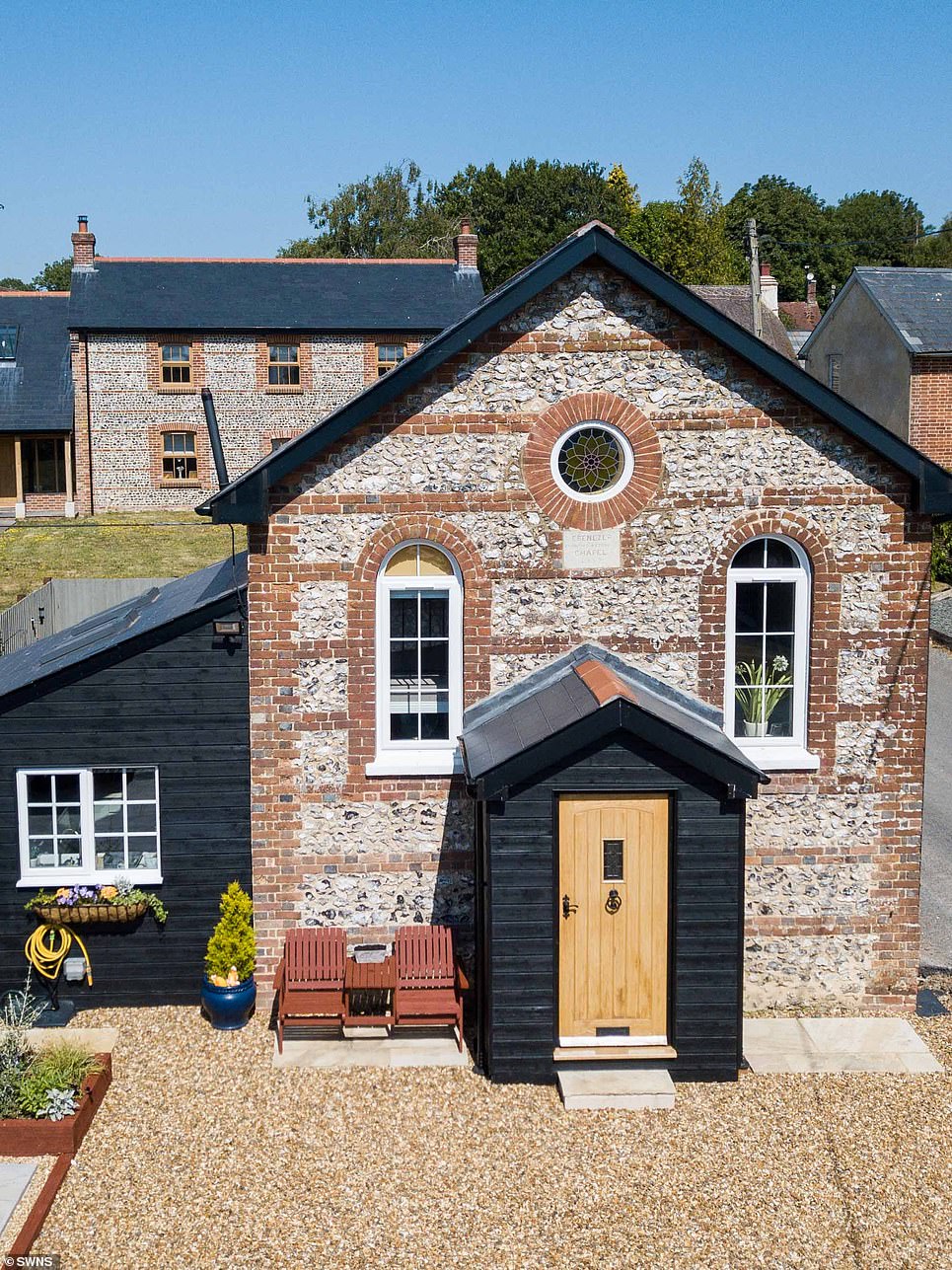 The exterior of the house before and after the renovations. The £155,000 chapel is now estimated to be worth £450,000 after Jayne’s renovations

During the renovation, she was able to draw on her carpentry skills having been taught everything from how to work a drill to mixing cement when she and late husband Harry built a house from scratch in 1999.

The grandmother-of-three now lives in the 1852 chapel which boasts a modern interior with a kitchen, plush bedroom and its own stain-glass window.

Jayne, who is a mother of two, said: ‘I’m pretty pleased with how it turned out. When I got my Completion Certificate I looked at Harry’s photo and said “I did it Harry!!”

‘When we built Pear Tree Cottage from the ground up I learnt everything. Harry taught me how to use power tools and then let me use them under his guidance until I was confident to use them safely.

‘He taught me everything – from how to mix cement, chop wood, how to cork and tape plasterboard.’ 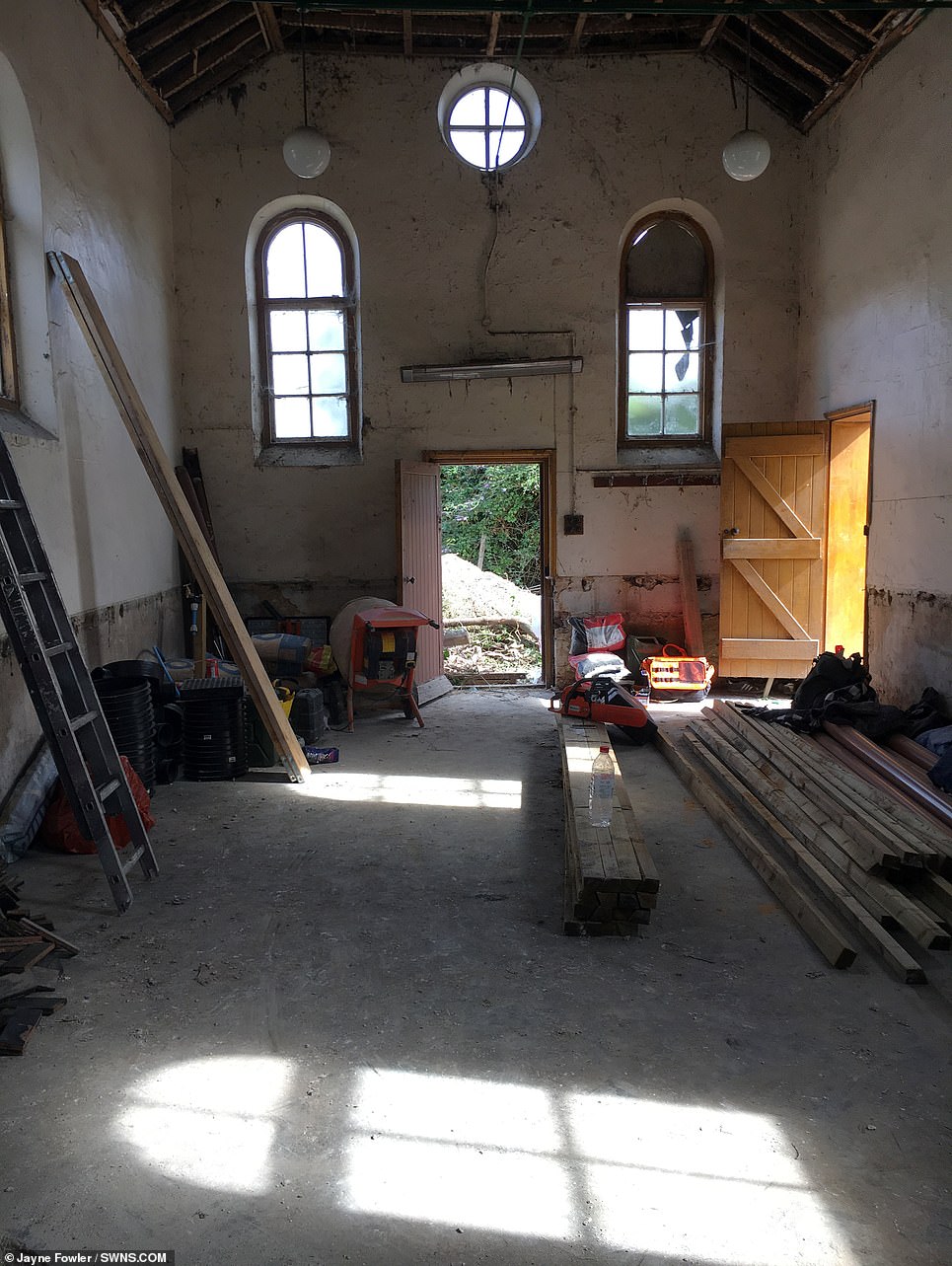 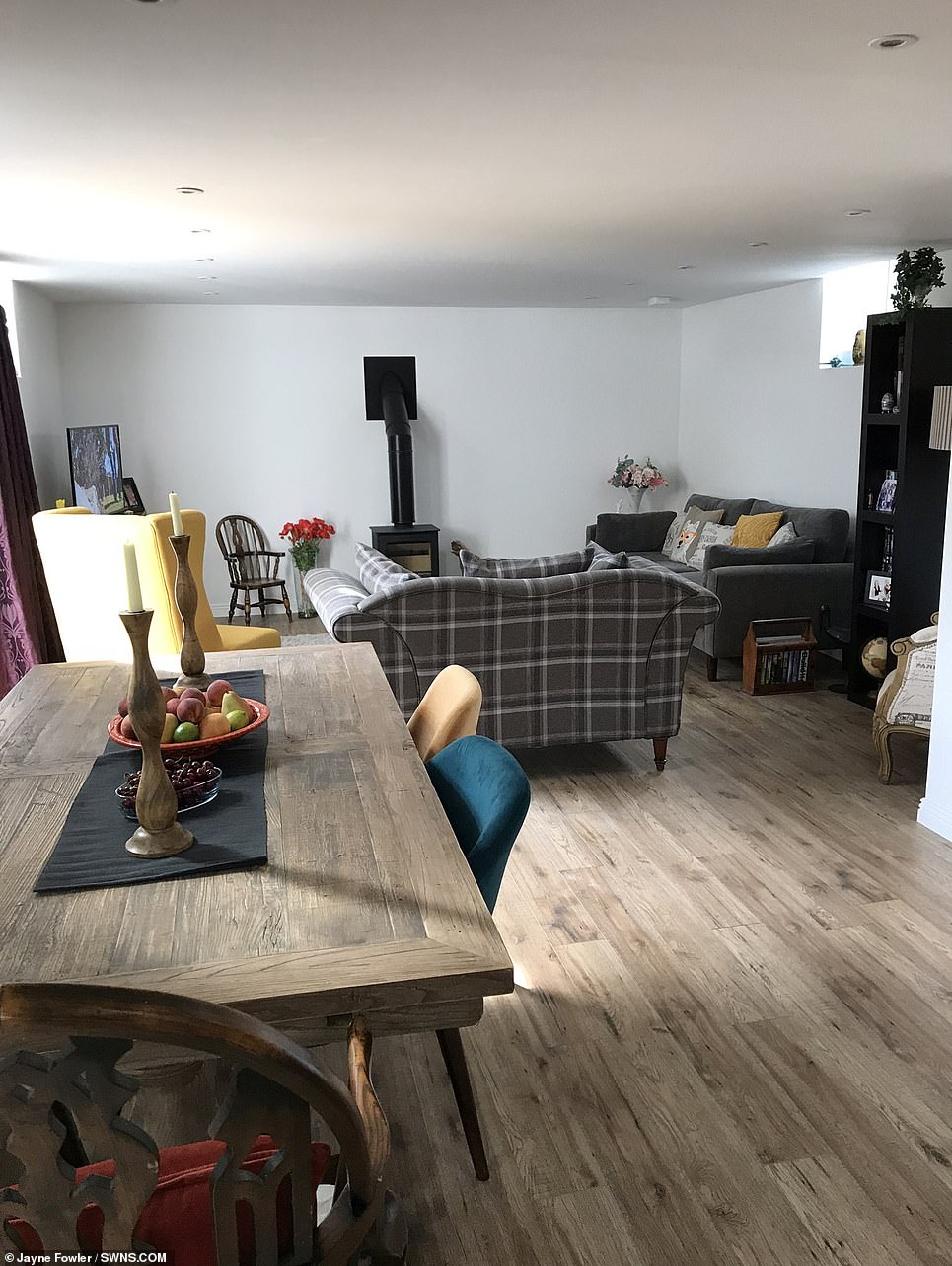 The before and after of the interior. In the first three months, Jayne gutted the interior and then put down new flooring and gave it a modern interior 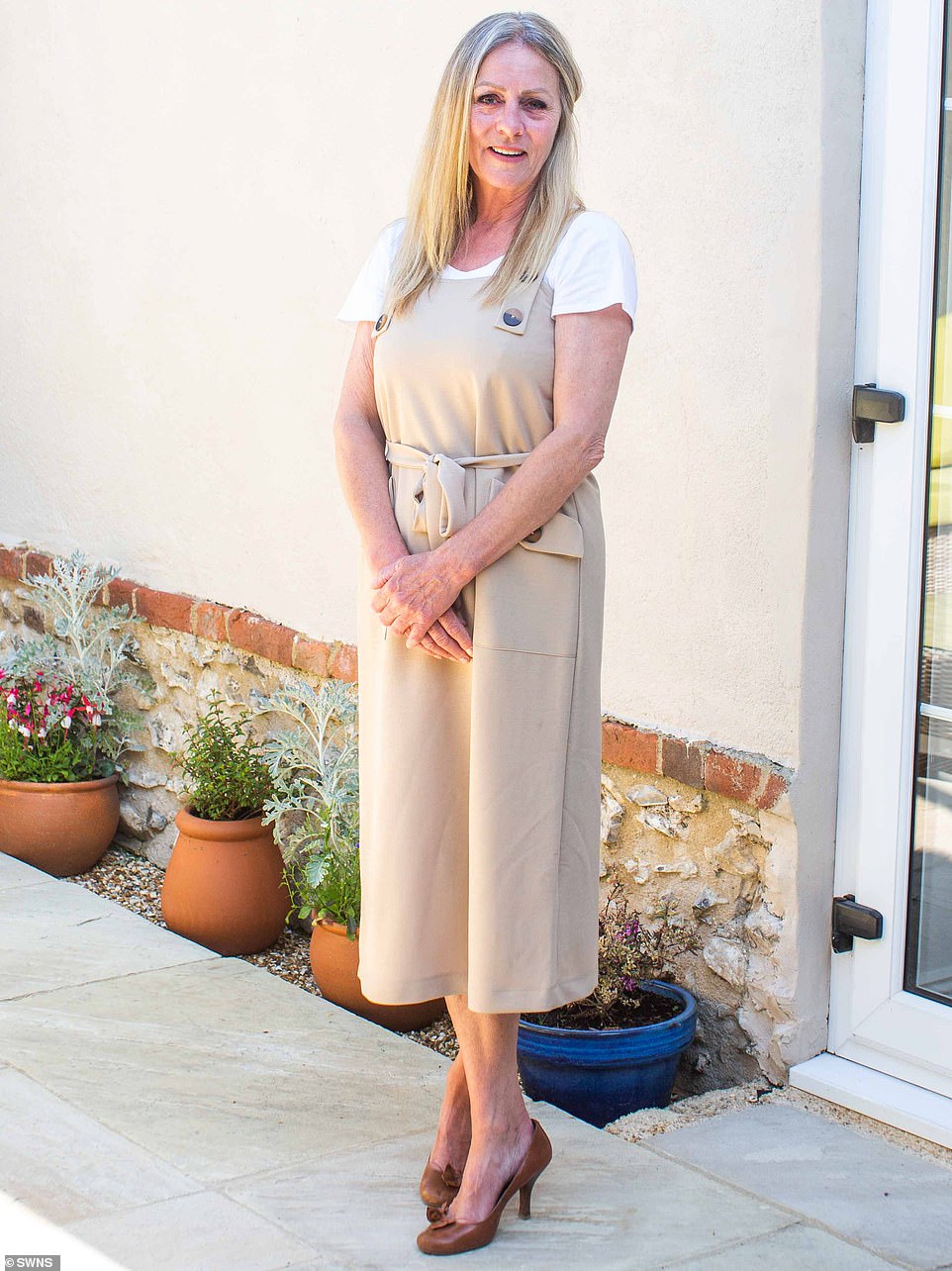 The grandmother-of-three now lives in the 1852 chapel which now boasts a modern interior with a kitchen, plush bedroom and its own stain-glass window 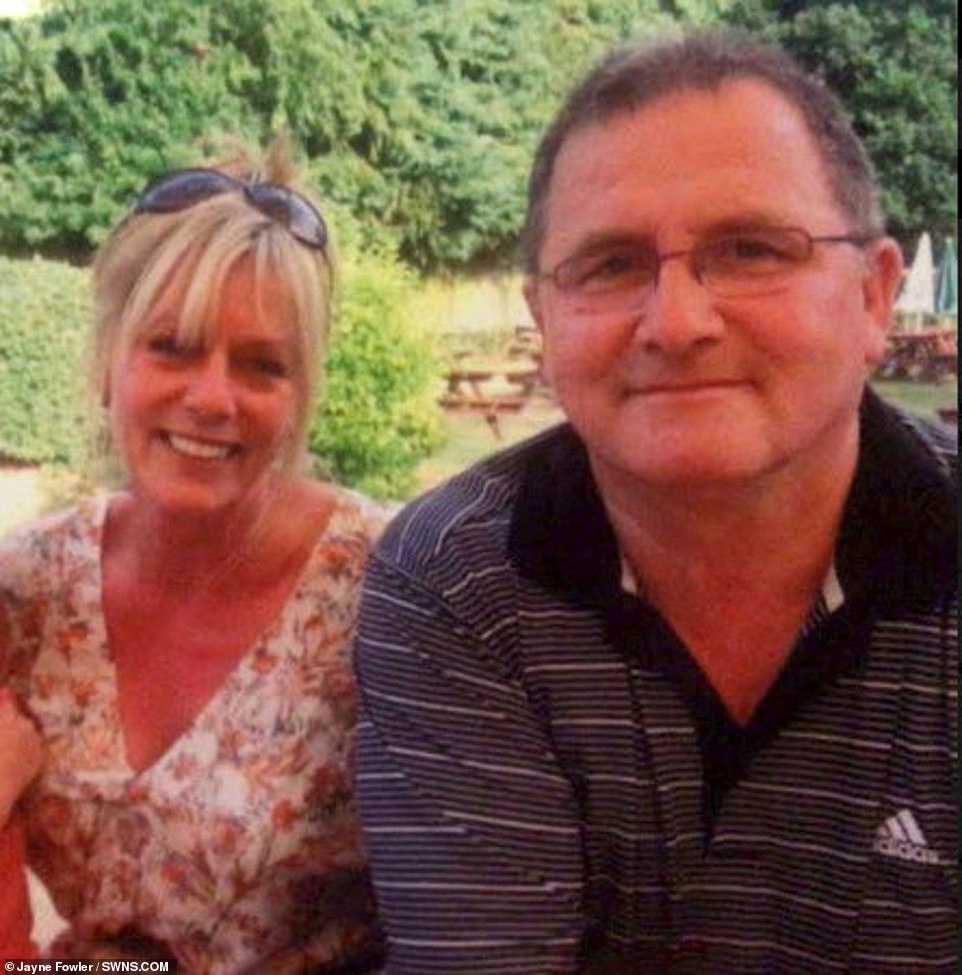 ‘After he had passed away I realised I had a real curiosity for self build, renovations and the housing market in general.’

While she mostly project managed the renovation, she helped out where she could and used hand drills, regular hand saw, jigsaw and chop saws. She said helping out with the flooring was a lot of fun.

She added: ‘It took about a year and I did have sleepless nights wondering whether I could pull it off and one of my neighbours seriously doubted me.

‘But a year later I did it! A 59-year-old widow with more determination than sense it seems!’ 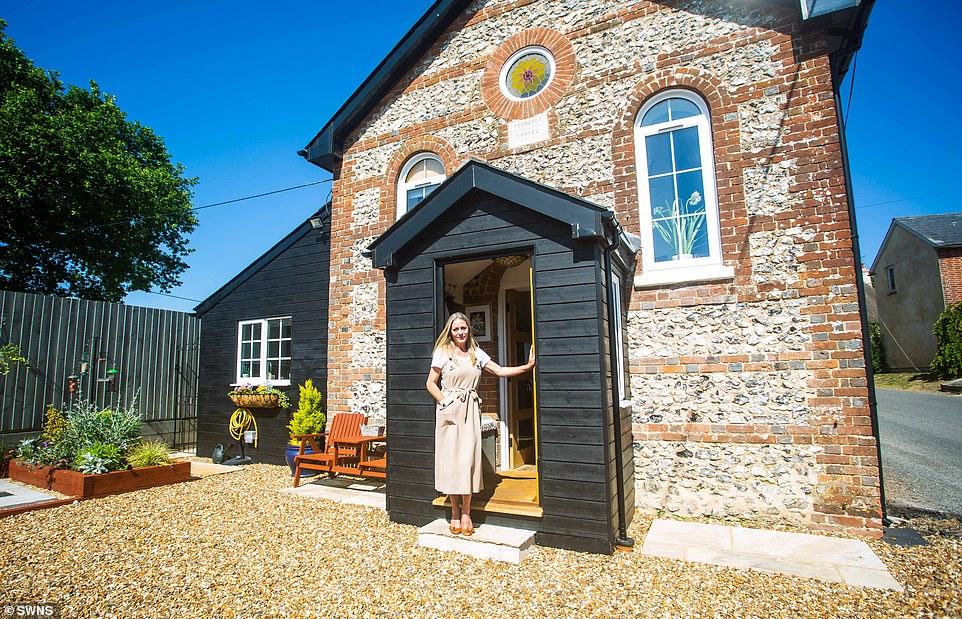 Jayne spent £135,000 renovating it, including a costly re-roofing. Her project was finished last July and she has been living in it ever since 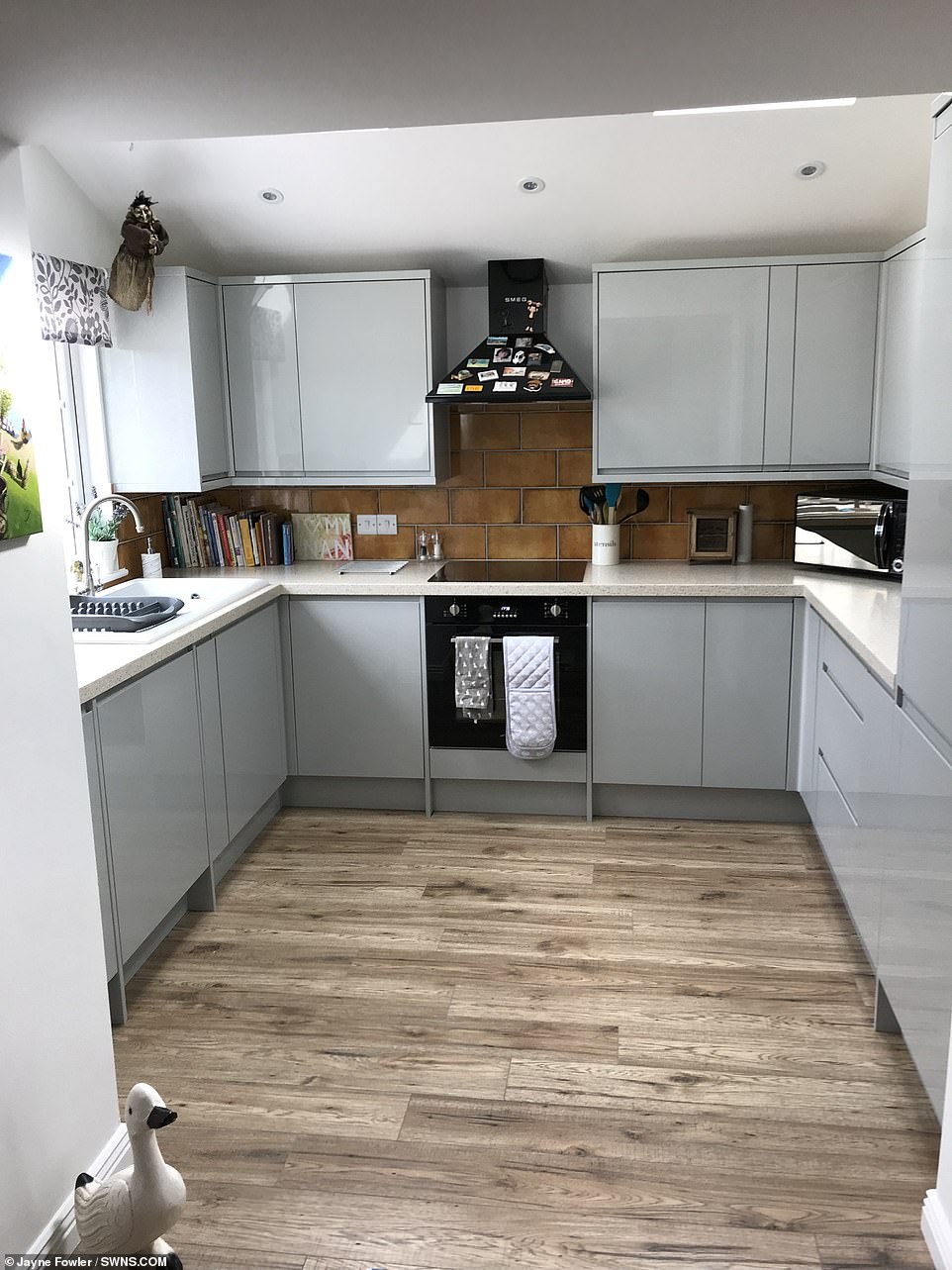 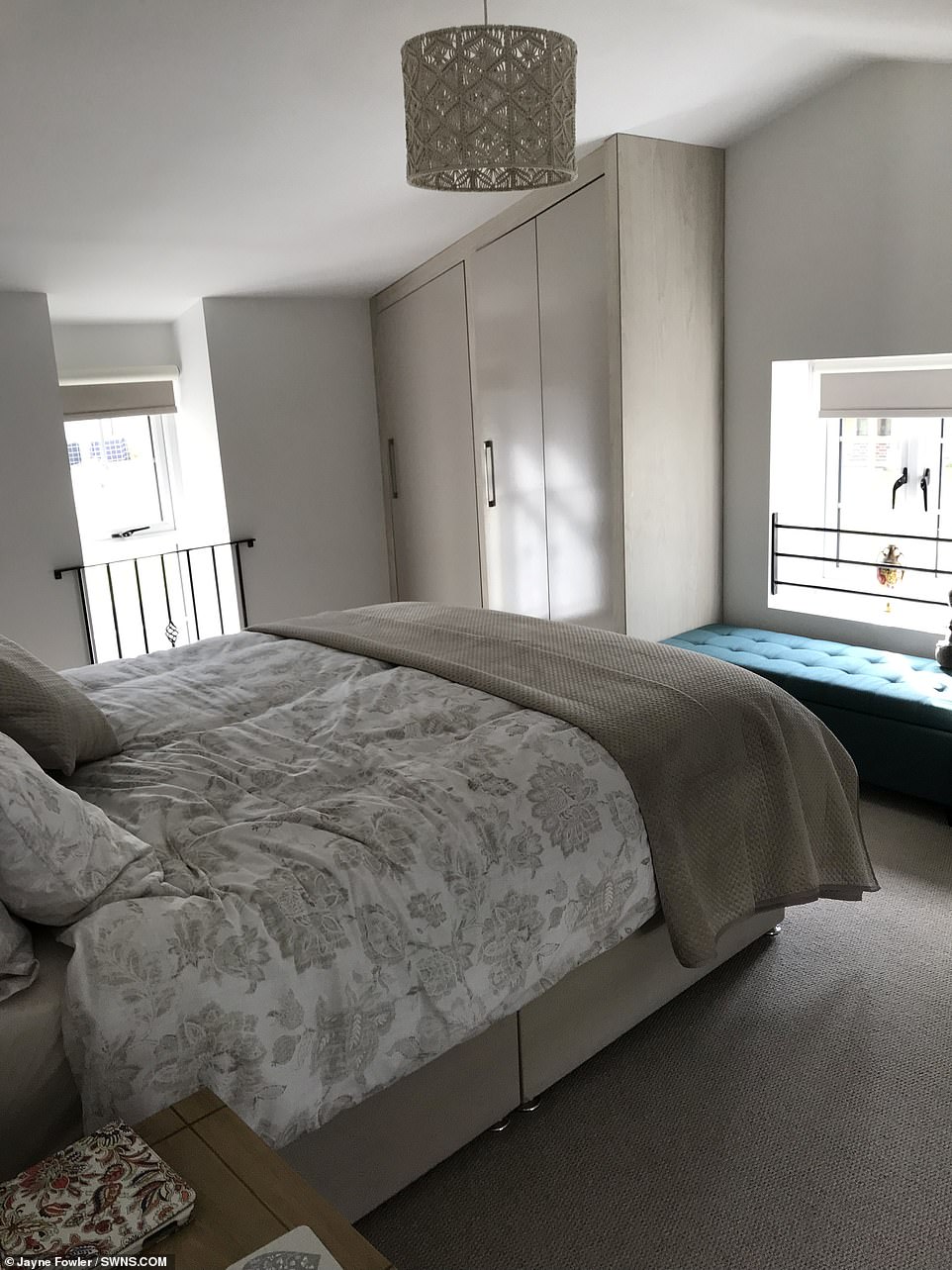 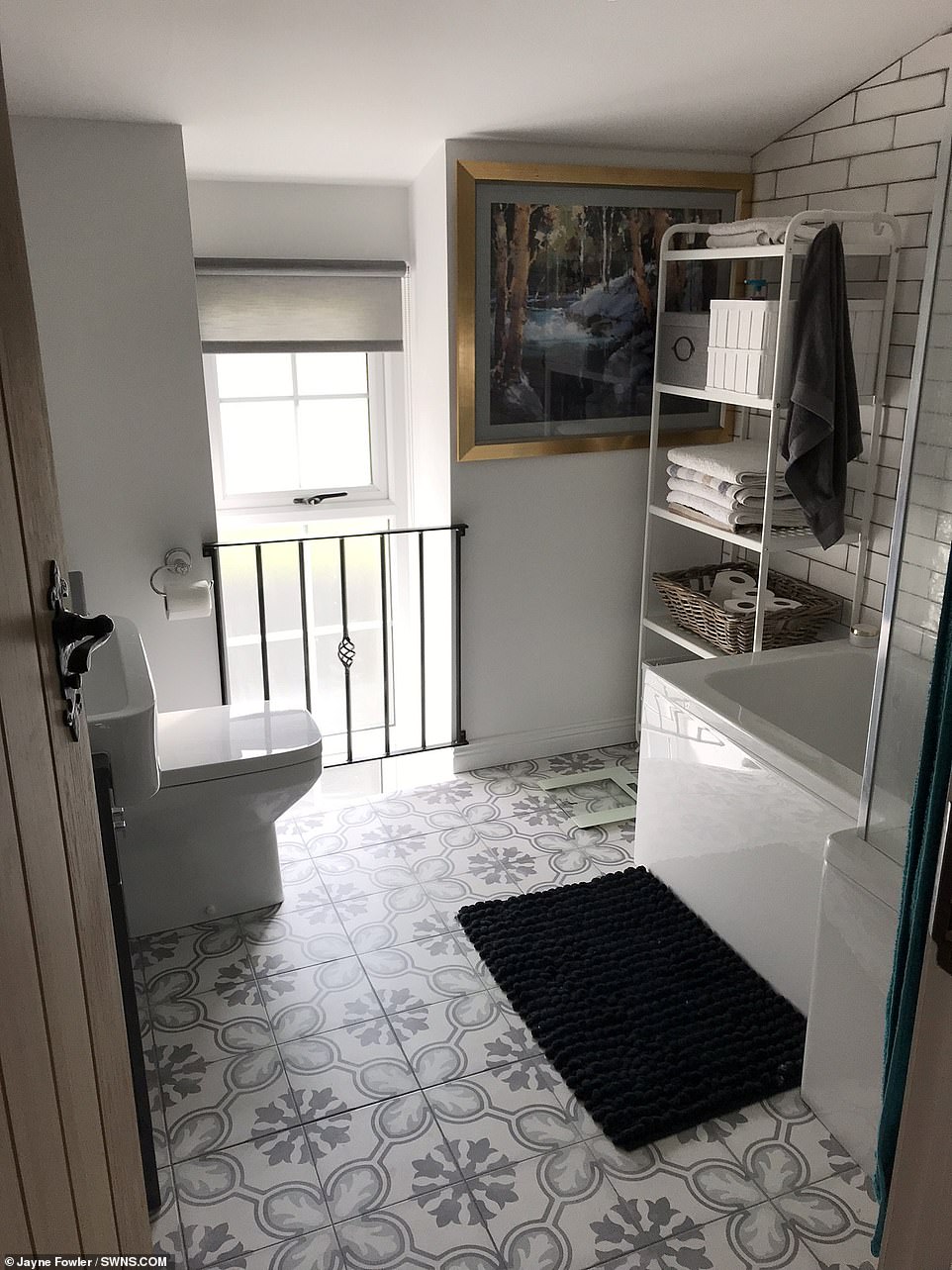 The bathroom is neutral-toned with white fittings and tones of grey, beige and black decorative items and towels

Suddenly widowed, she sold the home and bought a holiday lodge. But three years later while housesitting for a friend, Jayne stumbled across the Ebenezer Methodist Chapel in a Middleton and Major estate agents window.

She viewed it two days later, bought it the day after that for £155,000 and started work on it in the following few days.

Three other people were interested in buying the property but Jayne put in the best offer. 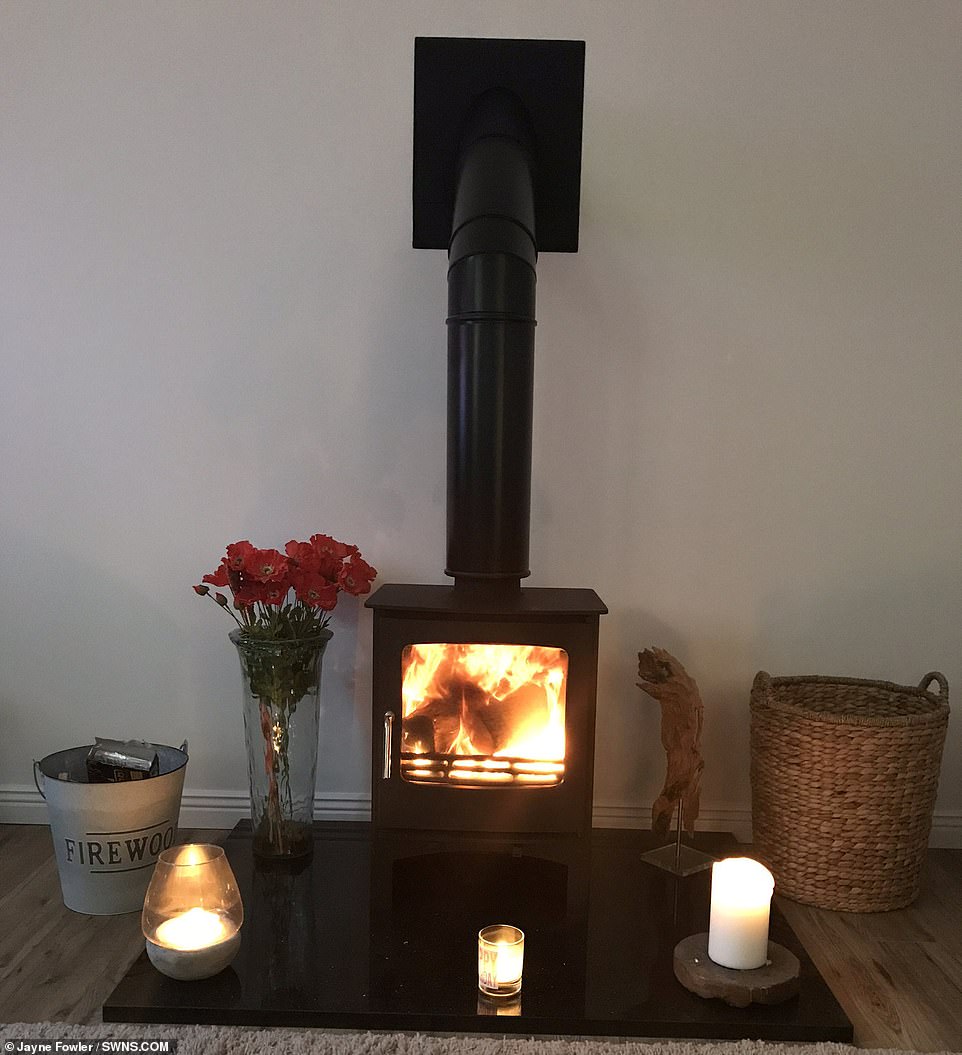 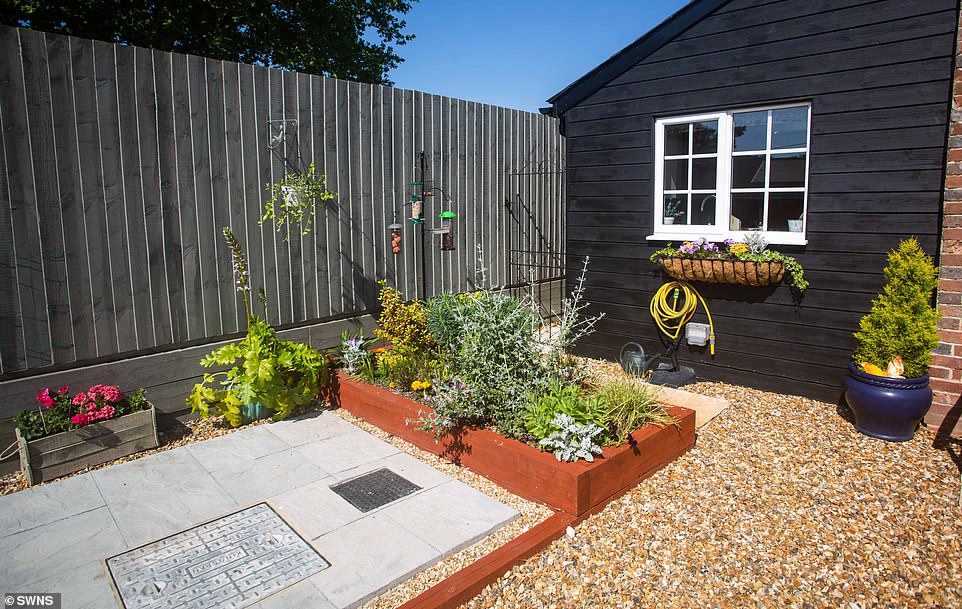 On the outside of the house there is a window box with a small patio area, flower bed, bird feeders and a potted plant

She said: ‘The next morning I woke up and my husband popped into my head. I thought ‘Oh my God Harry, what have I done?” But there was no going back and I didn’t have Harry to help me.’

Jayne said that Harry ‘gave me the ultimate gift of giving me the confidence to take on a challenge. I see it as a legacy to him.’

When Jayne first arrived at the chapel, it was covered in ivy and mould. The windows and roof timbers were rotten and had to be redone.

Over the next three months, she started gutting it out, applied for a change in planning consent and had to have a bat survey done. 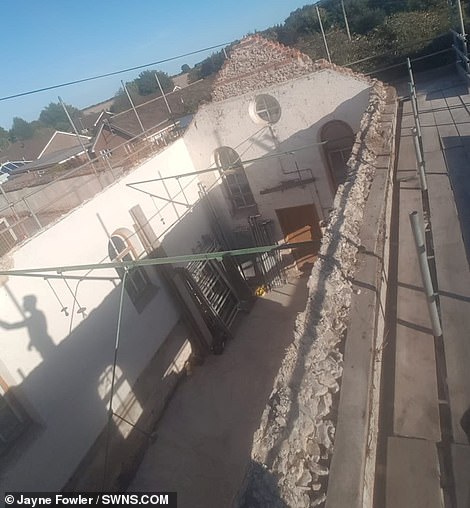 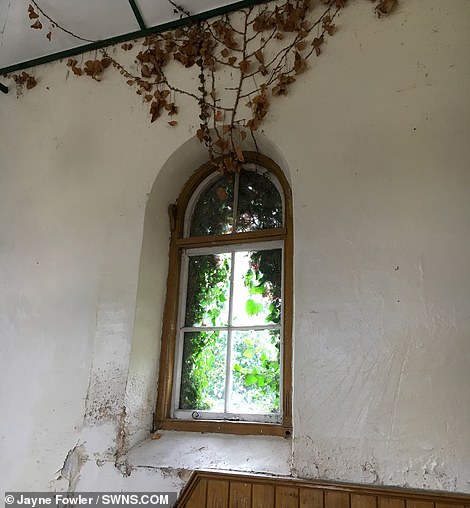 When Jayne first arrived at the chapel, it was covered in ivy and mould. The windows and roof timbers were rotten and had to be redone in the £135,000 renovation 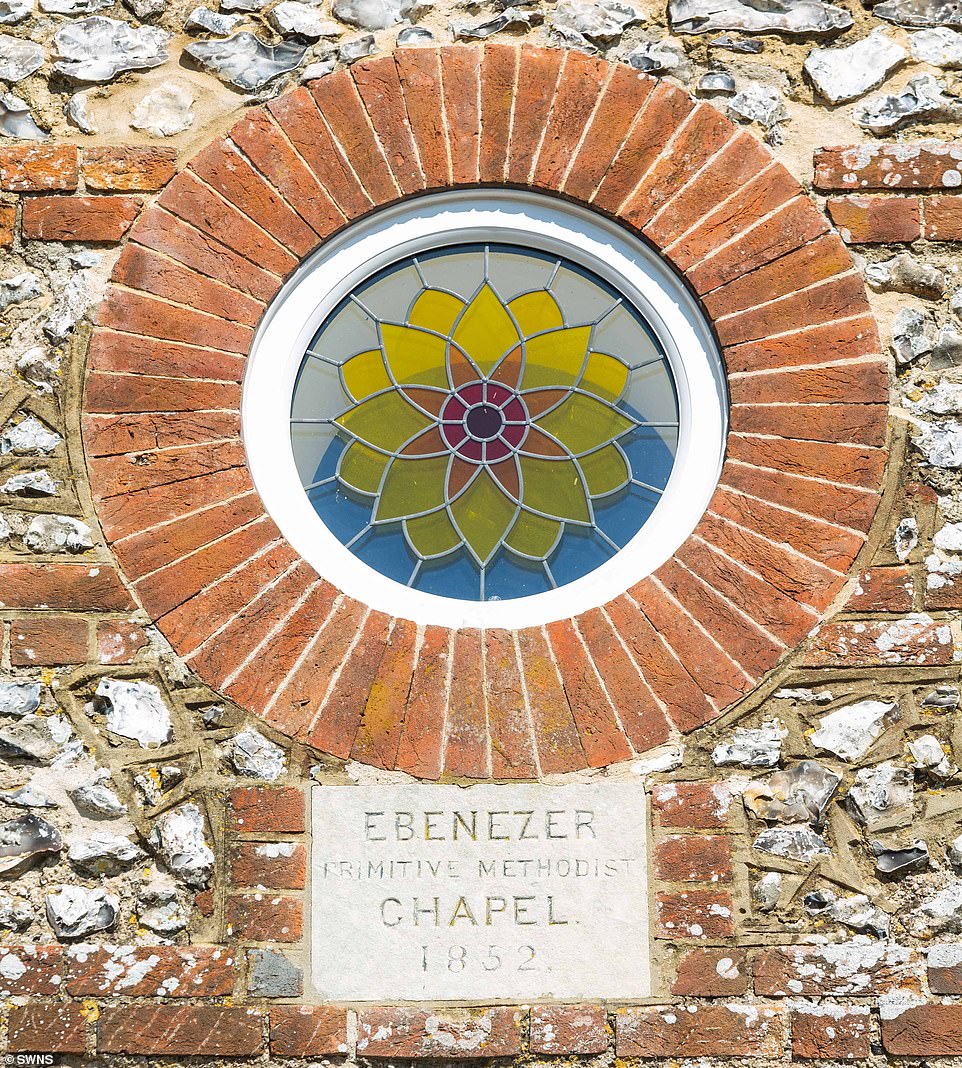 She said that she took it back to just four walls and started from there.

Jayne added: ‘I did have some serious doubts over the course of it. I had many sleepless nights wondering if I could pull it off. There was a point where I was £200,000 out of pocket and the place was anything but habitable.’

Jayne had an interest in properties after building the first house, which was built from scratch on an acre site with a derelict 15th century cottage, a London South West first class train carriage and lots of tin outbuildings.

The couple cleared the land and outbuildings, built a three-bed detached and thatched house and then renovated the little cottage.