An 80-year-old widower has been swindled out of his $200,000 life savings by a con artist who stole a Florida woman’s identity, persuaded him they were in a relationship and got him to pay to ‘ship a 500-ton marble lion sculpture from China’.

According to the Oregon Division of Financial Regulation, the elderly man from Oregon was catfished out of $200,000 in an elaborate scam that went on for several months.

The victim was persuaded to get involved in a business venture and sent money to the fraudster to pay for shipping costs for the ‘marble’ lion – which actually turned out to be a wooden lion that sits in a square in Wuhan.

The scheme began when the con artist, who has not been identified, allegedly stole the identity of a Florida woman and posed as her in an online dating service to lure in the unsuspecting widower.

The fraudster convinced him that they were in a long-distance romantic relationship, leaving the hapless romantic open to exploitation.

The Oriental Lion in the Fortune Plaza Times Square in Wuhan, China. The victim was persuaded sent money to supposedly pay for shipping costs for the ‘marble’ lion – which actually turned out to be this wooden lion in Wuhan

Once the man was under ‘her’ spell, she then persuaded him to invest in an art gallery in Florida and said she was seeking investors to pay the $5 million needed to ship a 500-ton marble lion sculpture from China, the regulators said.

The scammer allegedly promised that his investment would be returned plus profits from the sale of the lion.

The depths of deception even extended to the man being sent fake documents showing his contract with the museum and bank statements.

Head over heels with his new love and convinced he was being offered a credible business opportunity, the widower made a series of payments over five months to various individuals and overseas bank accounts, totting up to more than $200,000.

Then, his money – and his lover – vanished.

The elderly man lost his entire investment and federal investigators have so far failed to locate the scammer.

The lion sculpture the regulators said the fraudster used in the scam is actually made of wood – not marble – and can be found in the Fortune Plaza Times Square in Wuhan, China.

Known as the Oriental Lion, it measures 47.5 feet long, 16.5 feet high, and 13 feet wide, making it the world’s largest redwood sculpture, according to Guinness World Records.

The giant sculpture took 20 people over three years to carve out of redwood in Myanmar before it was transported to its current home in December 2015, where it has become a popular tourist hot spot.

There are no reports of plans to ship the mammoth structure to a new location.

Ironically for the man in this case, the lion is a symbol of power and is used to ward off evil spirits in Chinese culture.

The Oregon Division of Financial Regulation is warning other people to beware fake romance scams, with the elderly particularly falling prey to con artist scams. 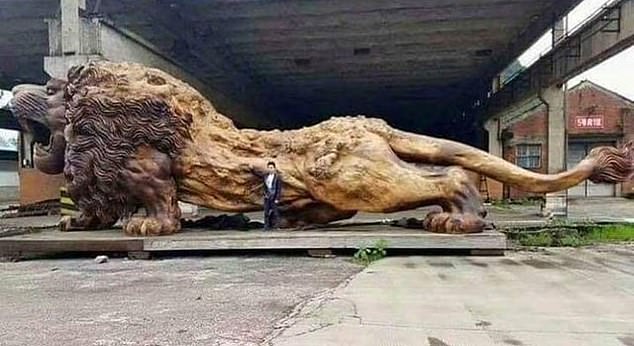 The 80-year-old widower was swindled out of his $200,000 life savings by the con artist who stole a Florida woman’s identity, persuaded him they were in a relationship and got him to pay to towards the $5 million shipping costs for the lion (above)

‘Unfortunately, victims often wire funds overseas or to third-party transfer agents, making it difficult to track the money and identify the con artist.’

Romance scams have become increasingly common in the last few years, according to the Federal Trade Commission.

Scammers target people looking for love with fake online profiles, often disguising themselves by staling the identity of real people before coming up with a ploy to have their new ‘love interest’ send them money.

More than 21,000 people fell foul to romance scams in the US in 2018, with victims citing losses of $143 million in total – higher than any other consumer fraud – according to Consumer Sentinel.

The Oregon Division of Financial Regulation is advising that people protect themselves from catfishing by: not sending money to anyone they have not met in person, using a licensed money transmitter if sending payments to third parties and keeping copies of all communications with scammers and reporting them to authorities.

‘Valentine’s Day is almost here, love is in the air, and the Oregon Division of Financial Regulation warns, don’t get catfished,’ the agency said.