A bereaved husband has called on men to better recognise signs of ill mental health in their menopausal partners after his wife of 41 years took her own life.

Linda Salmon, of Keighley, West Yorks., was just 56 when she took her own life last April after her anxiety suffered during the onset of the first national lockdown.

Classified as an essential worker because she was employed with a local supermarket in the Yorkshire town, mother-of-two Mrs Salmon was signed off work because she feared catching Covid. She took her life just days later.

Linda’s husband, David Salmon, said his wife’s death opened his eyes to the potentially deadly consequences the menopause can have on vulnerable women.

He warned in an interview with the BBC: ‘The physical side of symptoms you might see, but the mental ones are hidden.

‘I didn’t know there were all these other symptoms. I honestly thought the menopause was you got a bit warm and had a few moods and then when I saw the programme highlighting suicide it all came together.’

Mr Salmon believes both he and his wife would have sought help if they have understood more about the link between suicide and the menopause.

Linda Salmon, of Keighley, West Yorks., was just 56 when she took her own life last April after her anxiety suffered during the onset of the first national lockdown. Her husband, David, (right) has called on men to better recognise signs of ill mental health in their menopausal partners 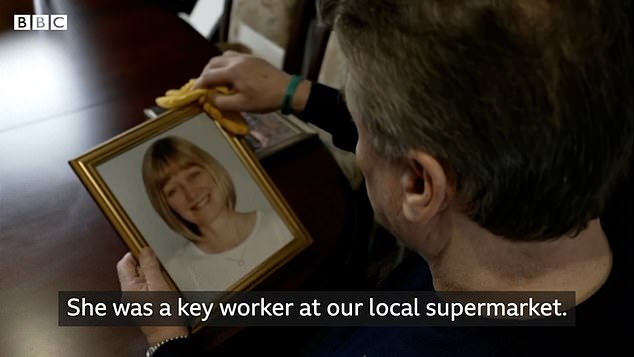 David recalled his wife’s tragic case in an interview with the BBC, where he warned the mental strain of the menopause isn’t always visible

At the onset of Britain’s first nationwide lockdown, Mrs Salmon worked in a supermarket in Keighley, West Yorkshire, but took her life days after she was signed off work for mental health reasons.

David, who was married to Linda for more than 40 years, believes the menopause significantly contributed to her poor mental health and claimed the pandemic ‘pushed her over the edge’.

Menopause normally begins between ages 45 and 55, with the average age of menopause being 51. In Britain, there were around 13million women who were in peri or post-menopause in 2016.

Data from the Samaritans showed the highest rate of suicide among women was between the ages of 45 and 54.

Diane Danzebrink, 55, found of community interest group Menopause Support, told the BBC: ‘The vast majority of women will be peri-menopausal by the age of 45, the average age of menopause is 51.

‘It’s become absolutely clear to those who work and campaign and advocate in this area that this is simply not a coincidence.’ 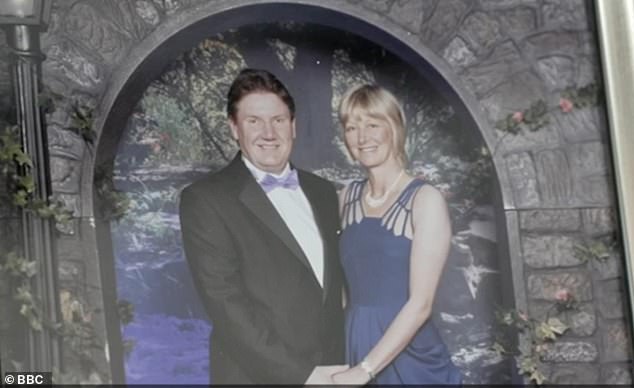 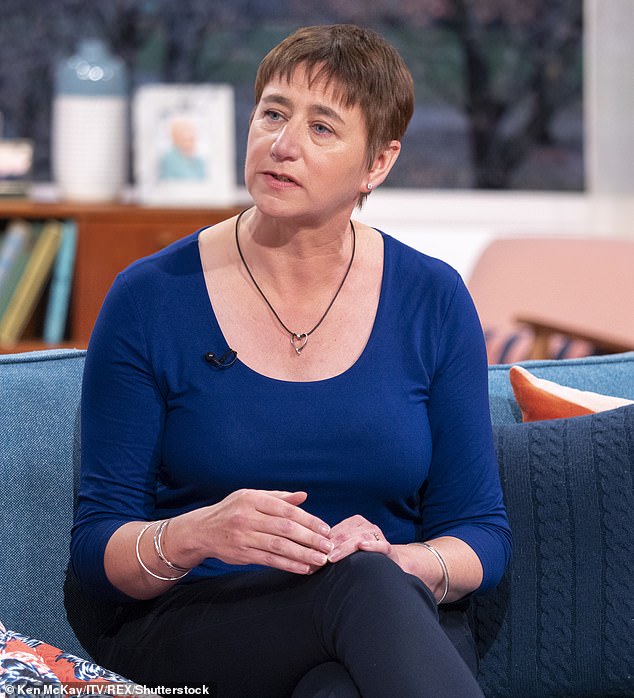 Diane Danzebrink, 55, found of community interest group Menopause Support, says she felt compelled to set up the organisation after realising she had not received the support she needed during the menopause

Having once contemplated committing suicide herself, Diane says she felt compelled to set up the organisation after realising she had not received the support she needed.

Her mental health was deteriorating and she suffered ‘crippling anxiety’, meaning she felt unable to leave her home and eventually stopped answering the phone or collecting post.

‘Eventually it got to the point where I remember standing in my bedroom and thinking if this is my life, I don’t think I want it any more,’ she added.

Her doctor prescribed her Hormone Replacement Therapy (HRT) after recognising her behaviour as extreme symptoms of the menopause.

Earlier this year, TV presenter Gabby Logan, 47, discussed a variety of symptoms including increased anxiety and disturbed sleep and called on men to learn more about the menopause.

Speaking to Jeremy Vine, she said: ‘I feel like if a man was going through all of this, I think we’d probably be able to get HRT from vending machines.

‘I think maybe men also need to have that frank conversation with themselves, mens testosterone drops off too Jeremy, it just does it at a slower rate.’

Mr Salmon said his goal was now to help other families spot symptoms so he can hopefully prevent others from suffering the same fate as his wife.

‘We need to talk about it and make people aware. It’s the mental side of it, not just the physical side,’ he explained.

‘If you are in a similar situation, I would say help your wife, hold her hand, get her through it.

‘You don’t want to be where I am today, nobody needs to do that.’

The menopause occurs when a woman stops having periods and can no longer fall pregnant naturally.

It is a natural part of ageing, which occurs in women between 45 and 55 years old.

However 1 in 100 women can experience menopause before the age of 40, which is known as premature menopause or premature ovarian insufficiency.

According to NHS advice, symptoms can begin months or even years before your periods stop and last around four years after your last period.

Premature or early menopause can occur at any age, and in many cases, there’s no clear cause.