The wife of a man charged with abducting and sexually assaulting a young girl says the ordeal has been ‘tough on her and her family’, as more details emerged about his alleged attack.

Sterling Marvyn Free, 26, is alleged to have kidnapped a seven-year-old girl from the toy aisle of a Kmart store at Westfield North Lakes, north of Brisbane, last Saturday afternoon.

Free’s long-term partner and the mother of his baby twins was not at Pine Rivers Magistrates Court on Thursday where he did not appear before the court, but was remanded in custody and his matter adjourned until February.

Talking from inside the home where her husband was reportedly arrested in front of her and her kids, Angie Hodgson admitted she was shocked by his alleged attack.

‘It’s been tough on me and my family,’ Ms Hodgson said.

‘We’ve had media at our door and I don’t know what else to say.’ 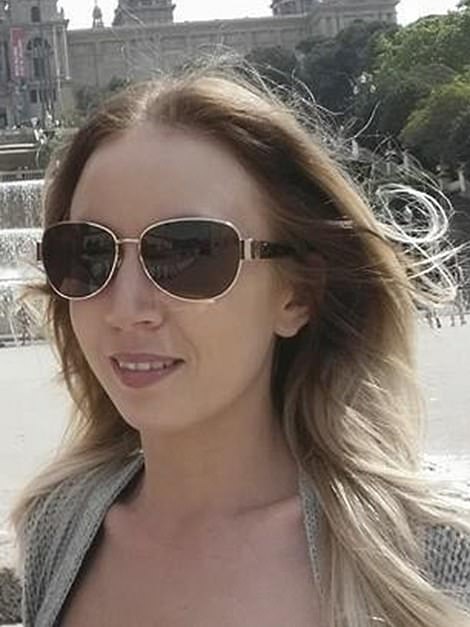 Sterling Marvyn Free (left, with his baby twins), 26, is alleged to have kidnapped a seven-year-old girl from Kmart and sexually assaulted her. His long-term partner Angie Hodgson (right) has broken her silence, claiming the ordeal has been ‘tough on her family’ 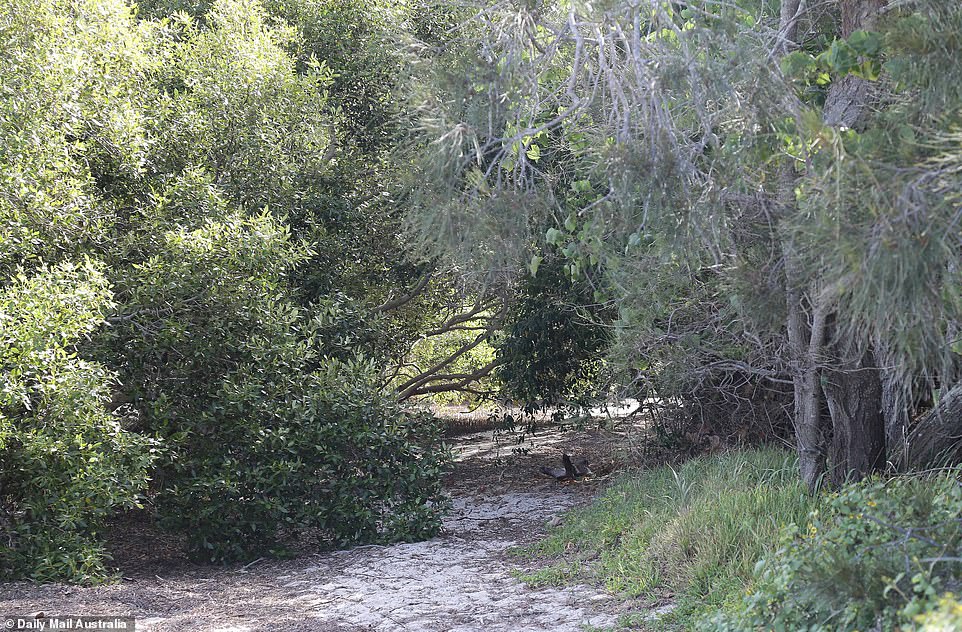 Police allege Free lured the young girl from the store and took her to nearby bushland where he is accused of sexually assaulting her. Pictured above is an eerie stretch of land near where the alleged assault is believed to have taken place 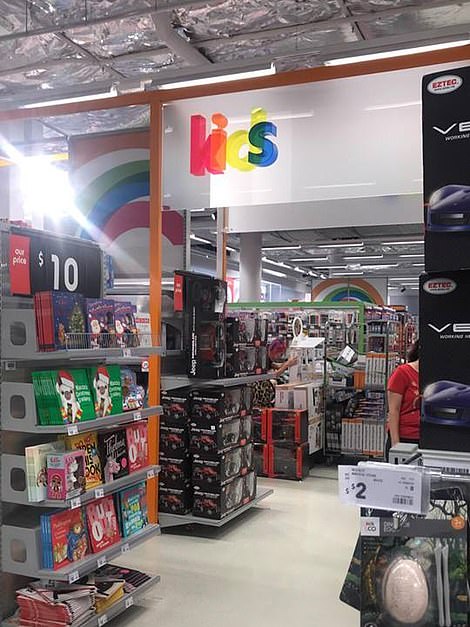 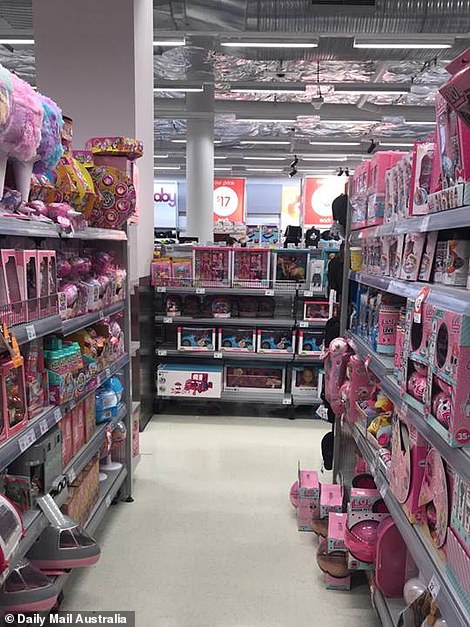 The seven-year-old girl was snatched from the toy aisle of a Kmart store at Westfield North Lakes, north of Brisbane. Daily Mail Australia visited the store on Wednesday (pictured above) and spoke to rattled staff who witnessed the alleged abduction

The alleged attack inside the Kmart store occurred at a time when it was packed shoppers buying Christmas gifts for loved ones.

Free had allegedly watched the young girl from a distance as she picked out presents with her mum, before luring the youngster over and grabbing her when the woman looked away for a split second.

The father-of-two allegedly then drove the girl to a nearby bush area at Pumicestone Passage and sexually assaulted her.

CCTV cameras inside the Westfield complex allegedly capture Free leaving with and then returning the girl to the Kmart store, where her panicked mother had reported her missing to store staff.

The child was then taken for medical treatment.

She has not been able to tell detectives what happened for the hour she was gone.

Senior police sources told 9 News that Free’s phone and computer had been seized.

Staff inside the popular department store confirmed the mother had been hysterical when she was unable to find her daughter.

‘It happened in one of the toy aisles just here where there were heaps of kids,’ an employee said.

‘You could hear the mother yelling out for her daughter, but kids lose their parents all the time – you never imagine something like this will happen.’ 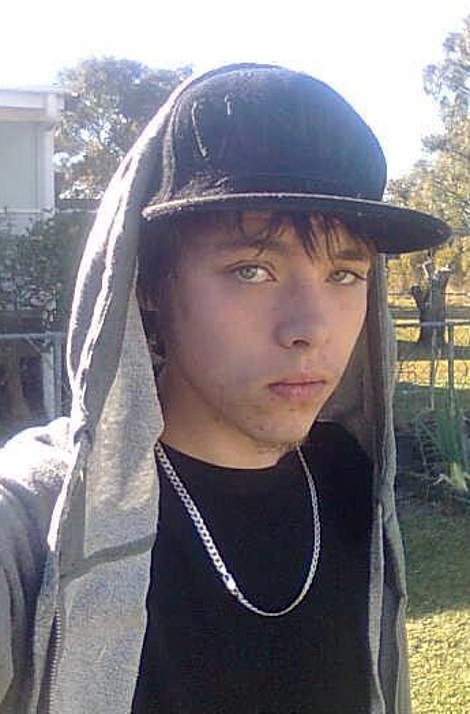 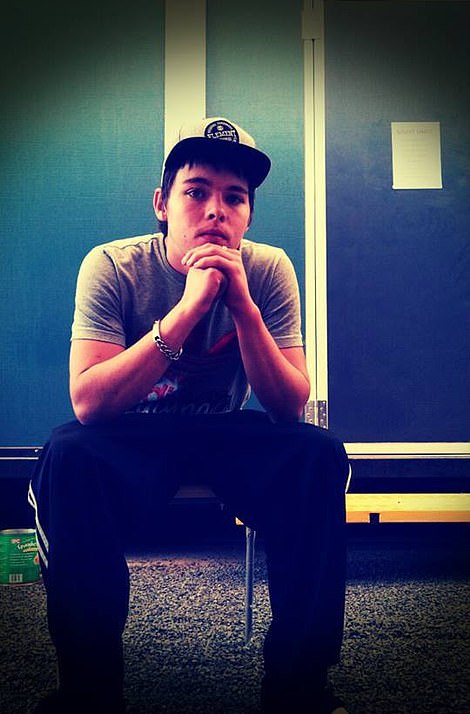 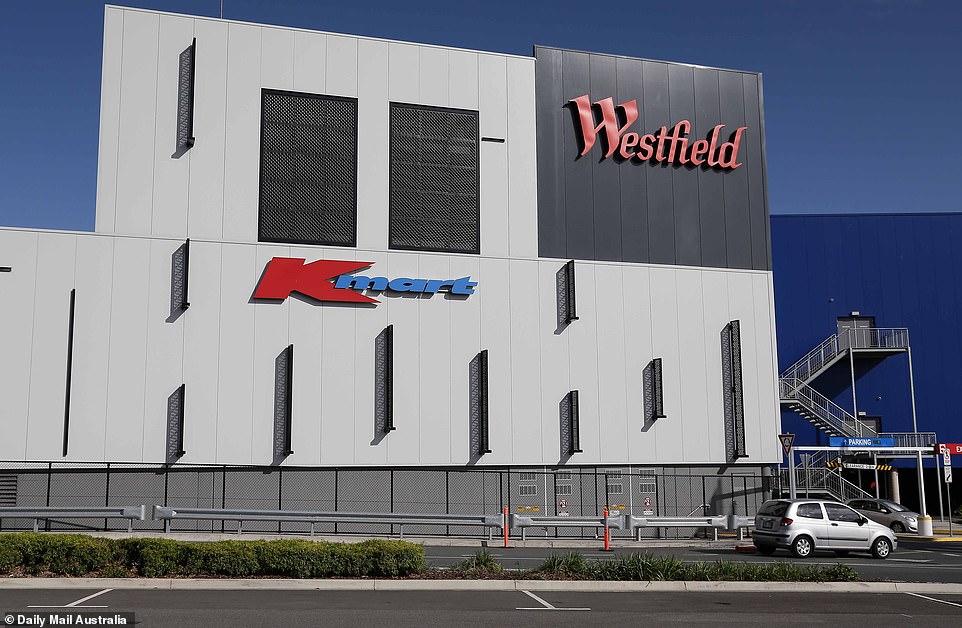 The terrifying alleged abduction has sent shockwaves across the nation, with mothers banding together to support each other (pictured above is the Westfield store where the young girl was snatched)

Free was arrested by police on Monday, more than two days after the alleged sexual assault.

He has since been charged with taking a child for immoral purposes, one count of deprivation of liberty and another count of indecent treatment of a child under 12.

Neighbours told how much to their shock an ‘army’ of officers had converged on the quiet street and raided the couple’s family home.

‘It’s a quiet street and so when I saw all these cars I stuck my head outside, and there was an army of police going in and out of the house,’ one neighbour said.

‘I couldn’t believe what I was seeing and then they brought him out in handcuffs and sat him on the front lawn.’

Another neighbour said she had met Free only once, but on that occasion he spent more than an hour helping to find her dog after it escaped her backyard.

Other homeowners in the street – some with young children of their own – were totally unaware the alleged sex predator they had heard about on the news lived just a few doors up.

They did however notice regular police patrols in the street after a flurry of threats of vigilante violence were made on social media. 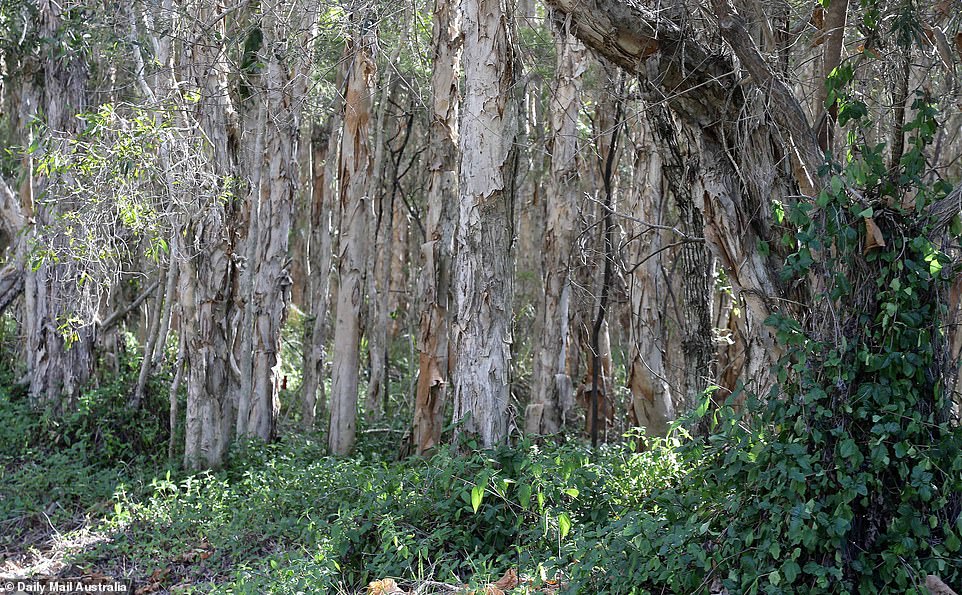 Neighbours told how much to their shock an ‘army’ of officers had converged on the quiet street and raided the couple’s family home. Pictured above is a stretch of bushland near where it’s believed Free allegedly sexually abused the girl 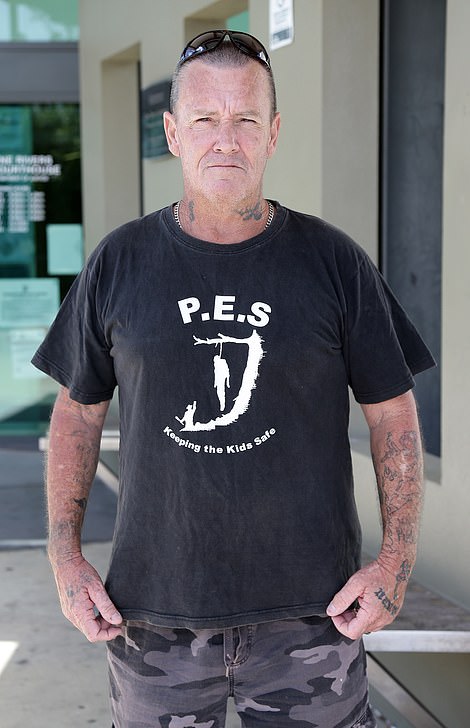 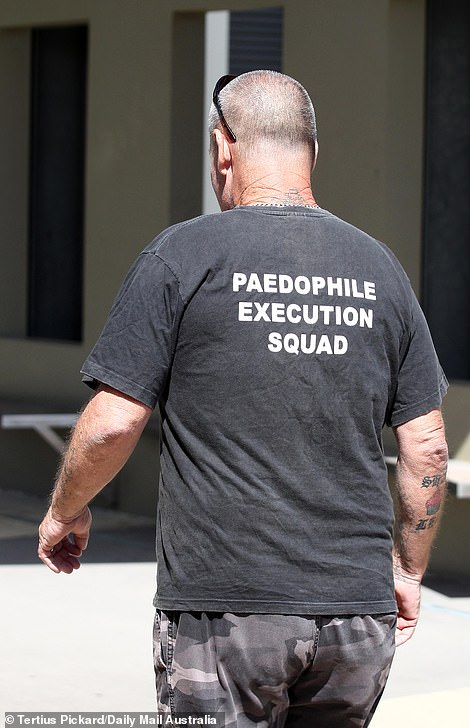 Outside the court, a man said he was there in support of the child victim. He wore a t-shirt with ‘paedophile execution squad’ written across the back of it

Prior to his arrest Free had worked at a local Fantastic Furniture store, where staff remained tight lipped on Wednesday.

Before that he had spent a number of months working as a FIFO contractor in the Western Australia mines.

Free’s name and details about his family had been suppressed by the courts until Wednesday, despite being widely circulated on social media.

For the second consecutive day Magistrate Trevor Morgan booted media from the courtroom for the hearing of Free’s matter.

The bow-tie wearing magistrate said he did not want Free ‘to be lynched’ on social media and in the court of public opinion.

‘I entirely support the position taken by the police in not disclosing more information. Less information would have been more helpful,’ Mr Morgan said.

‘What I need to bear in mind is the public’s behaviour,’ he said.

Daily Mail Australia earlier revealed Free was known to child protection services in QLD and has previously been investigated by police for alleged attacks involving children.

Free did not appear in court and his duty lawyer did not apply for bail on his behalf, and it was formally refused. He will remain in custody until his next court date in February next year. 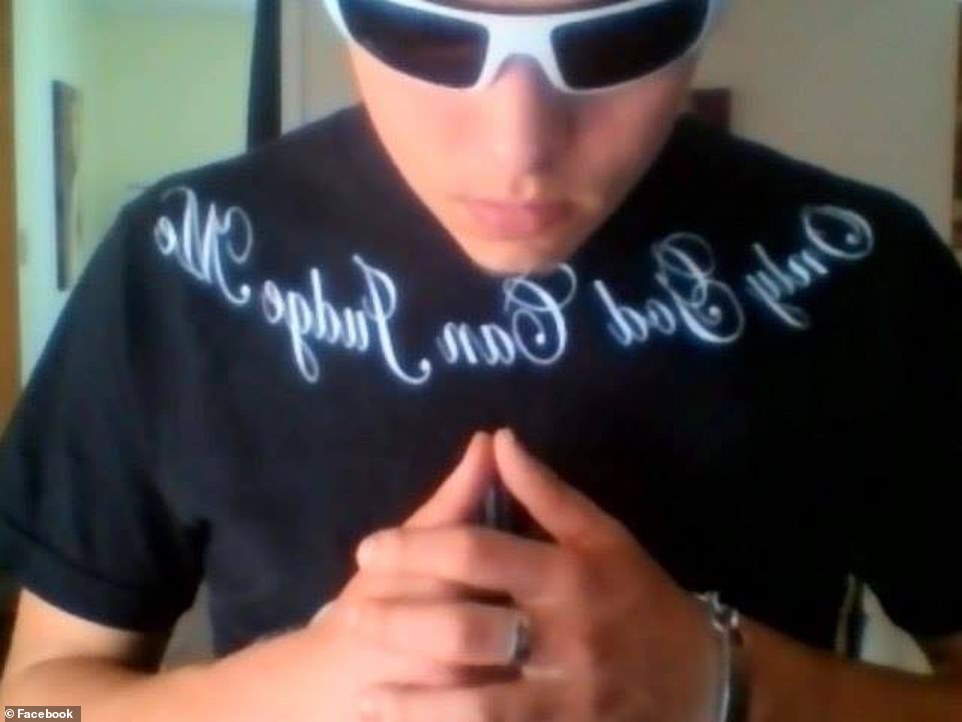 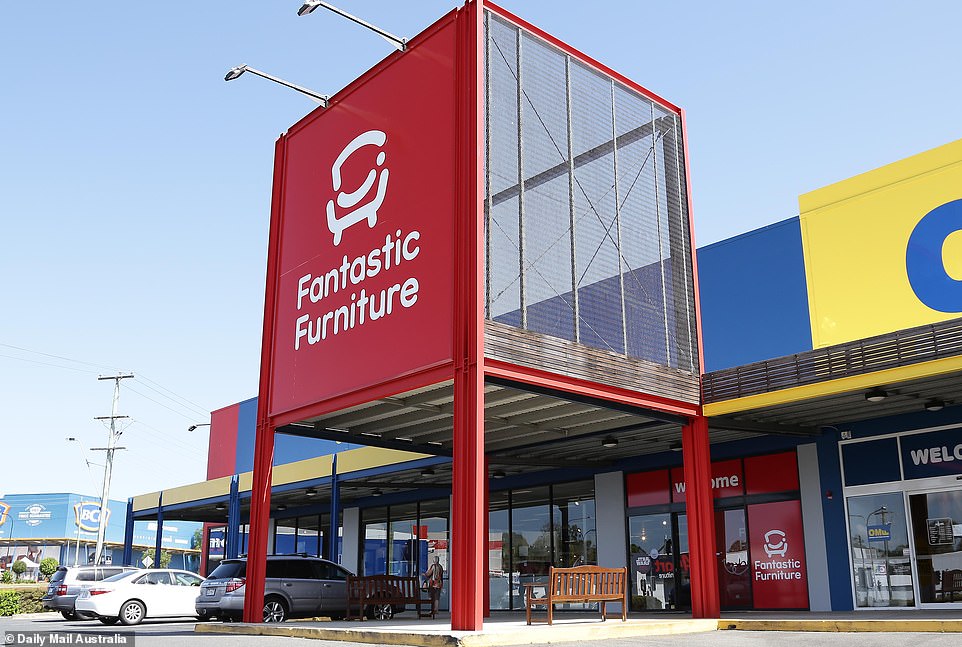 Prior to his arrest Free had worked at a local Fantastic Furniture store (pictured), where staff remained tight lipped on Wednesday