The wife of the US Consul General in Chengdu has faced backlash in China after web users accused her of comparing her departure from the city earlier this year to Jews escaping from the Nazis during the Second World War.

Beijing has shut down Washington’s Chengdu office in tit-for-tat retaliation after Donald Trump closed down China’s consulate in Houston amid spying accusations.

But Chuang Tzu-I, the Taiwanese spouse of consul-general Jim Mullinax, had left the Chinese city in February with her two children due to the coronavirus outbreak. 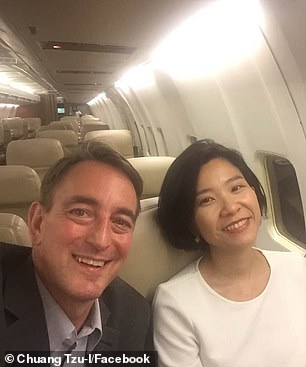 Chuang Tzu-I, the wife of the US Consul General in Chengdu Jim Mullinax, has been caught in the crossfire amid escalating diplomatic tensions between Beijing and Washington. The food writer, originally from Taiwan, is seen with her husband in the above pictures on her Facebook 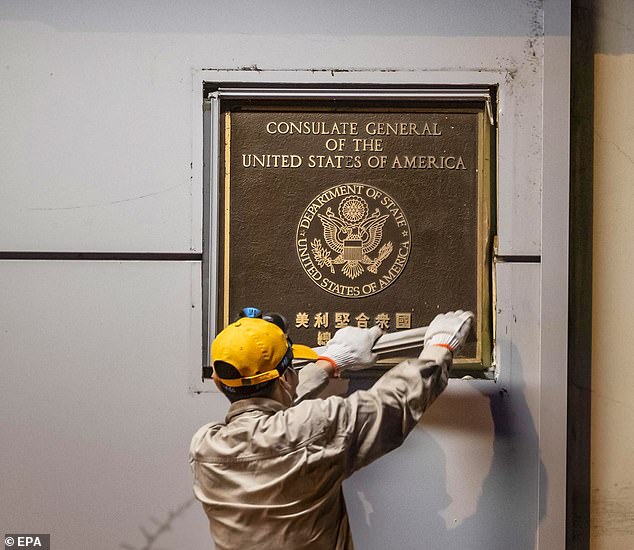 The US flag was lowered at the US consulate in Chengdu on Monday amid spiking political tensions. A man is pictured trying to remove the sign in front of the building on Sunday

The food writer drew the ire of nationalist internet users at the weekend after describing her sadness of the sudden exit from China in a social media post from July 1.

Tzu-I followed her husband to the Chinese provincial capital after he was assigned as the US Consul General in Chengdu in August 2017.

In the controversial post on Twitter-like Weibo, Tzu-I, who was in the US at the time, detailed her deep bond with Chengdu, where she had lived for more than two years. 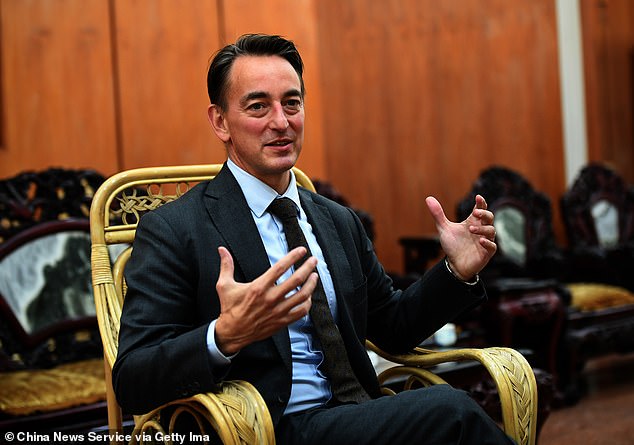 Tzu-I’s husband, Jim Mullinax, was assigned as the US Consul General in Chengdu in August 2017. Mr Mullinax is pictured receiving an interview in Yunnan, China, on December 5, 2017 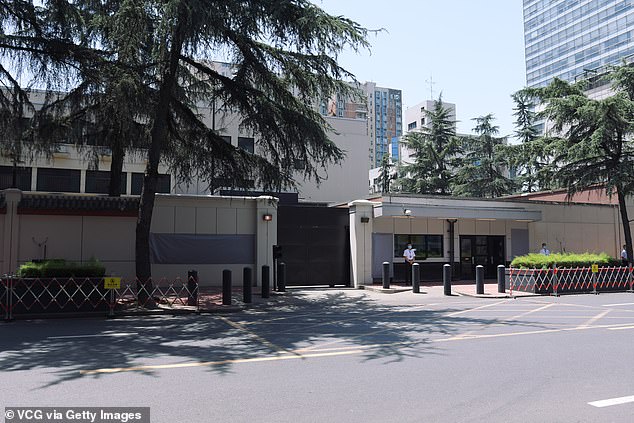 Tzu-I said she had hoped to move back there so she could continue to enjoy local delicacies and her children could bid farewell to their classmates – before the end of her husband’s three-year term.

She recalled how she and her two children had only 48 hours to pack up and leave Chengdu in February after the Chinese government had ordered all family members of foreign diplomats to leave the country due to the coronavirus outbreak.

The author confessed she was reluctant to leave her Chengdu home and described casting a last glance at the blooming flowers in her living room, new books in her bedroom and food ingredients in her kitchen.

Then she said that she wondered, in a flash, if that was how Jews had left their homes to avoid the Nazis before the Second World War.

‘Then I shook my head and did not want to be too emotional. [I] told myself I would be back very soon,’ she added. 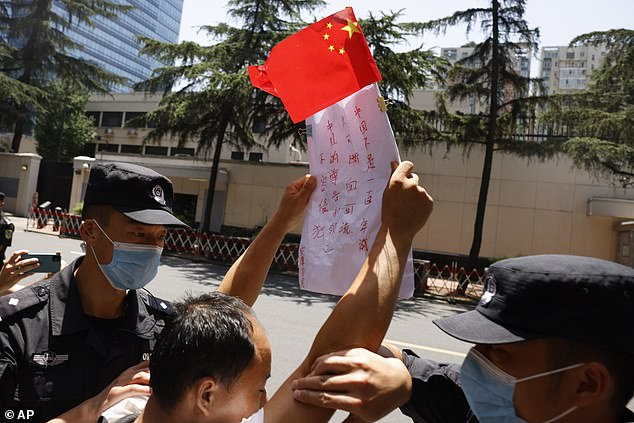 The news comes as anti-US sentiment is running high in China. Pictured, police restrain a man from shouting pro-China slogans outside the former US Consulate in Chengdu on Monday

Tzu-I’s words were quickly targeted by some patriotic Chinese web users, who criticised her for making such a comparison.

One user called Tzu-I ‘hypocritical’ and ‘selfish’. The person said: ‘Can you pretend to be even more hypocritical? Ask what the US did first.’

Another commenter opposed: ‘You are not Jewish, and China is by no means the Nazis.’

However, many supporters also expressed their appreciation for Tzu-I and her attitude towards life.

One such fan wrote: ‘Take care and look forward to your return.’

Another admirer noted: ‘[I] like you, your innocent and natural lifestyle as well as your glowing inner charm.’

The controversy comes as anti-US sentiment is running high in China due to the escalating political tensions over issues such as Xinjiang’s Muslim re-education camp, Hong Kong’s national security law and Beijing’s handling of the coronavirus. 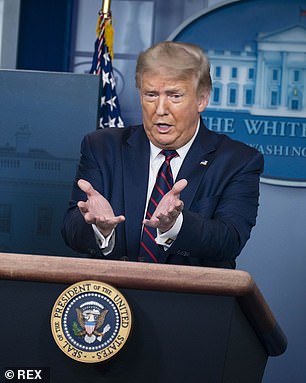 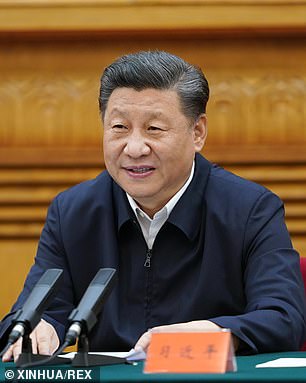 Relations have deteriorated in recent weeks in an intensifying standoff between Washington and Beijing, with the Chengdu mission ordered to shut as retribution for the forced closure of the Chinese consulate in Houston. Both countries cited security concerns as the reasons

Beijing also accused the US diplomats in Chengdu of engaging in activities ‘that harm China’s security interests’.

Under Tzu-I’s subsequent posts, some Weibo users labelled her as ‘spies’. Several took one step further and accused her husband of collecting intelligence about Xinjiang and Tibet for the US government.

In response to the backlash, Tzu-I said on Facebook yesterday that she had not expected her previous social media posts to draw debate.

She admitted that she regretted some of her ‘straightforward and even impetuous’ choice of words, but stressed it would be ‘unnecessary’ to delete her Weibo account or edit her posts. 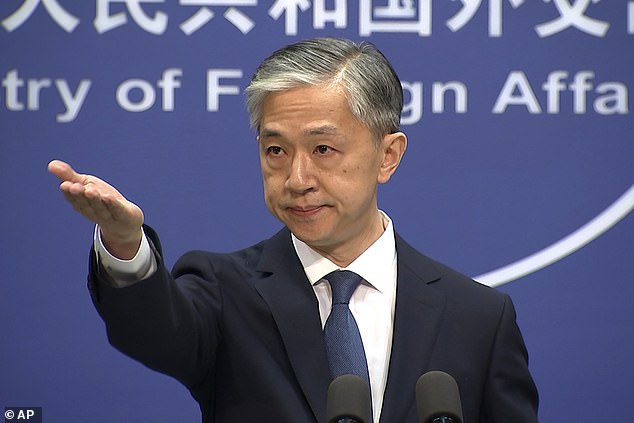 Commenting on China’s decision, foreign spokesperson Wang Wenbin (above) said: ‘The relevant individuals from the U.S. consulate in Chengdu engage in activities that do not match their status, interfere in China’s domestic affairs and harm China’s security interests’ 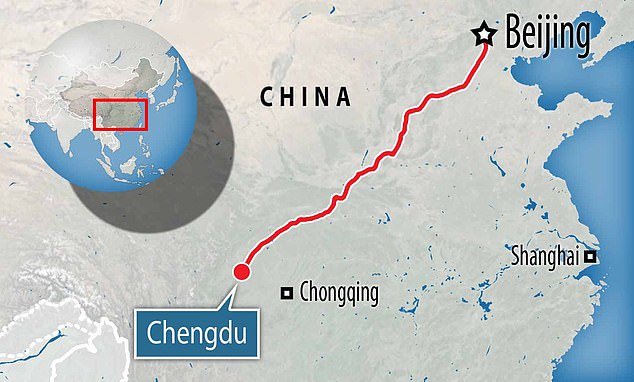 Chengdu, a major city in western China, is more than 1,680 miles from the capital city Beijing

Tzu-I expressed her love for Chengdu and showed her support for the former consulate employees – from drivers to cleaners – who ‘also lost their jobs overnight’.

She stated she should learn from Chengdu people and praised them as ‘positive’, ‘diligent’ and ‘appreciative for food and beauty’.

She told her readers and friends not to worry about her and thanked them for encouraging her. She said she was looking forward to meeting her husband by the end of August.

On Monday, the American flag was lowered at the US consulate in Chengdu as Beijing carried out a Cold War-style retaliatory closure of the mission. 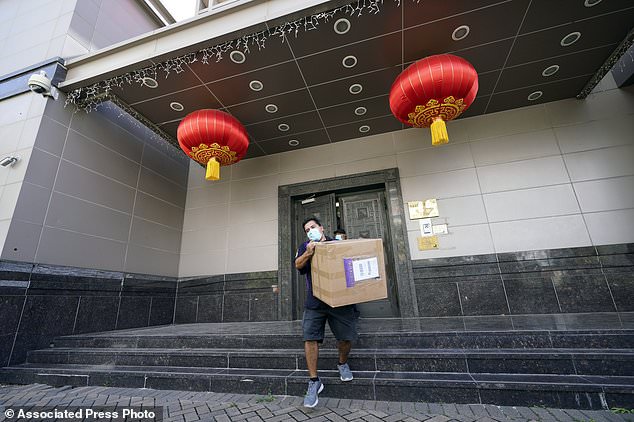 The Trump administration last week ordered the Houston consulate closed within 72 hours. Pictured, a FedEx worker removes a box from the Chinese Consulate in Houston on Thursday 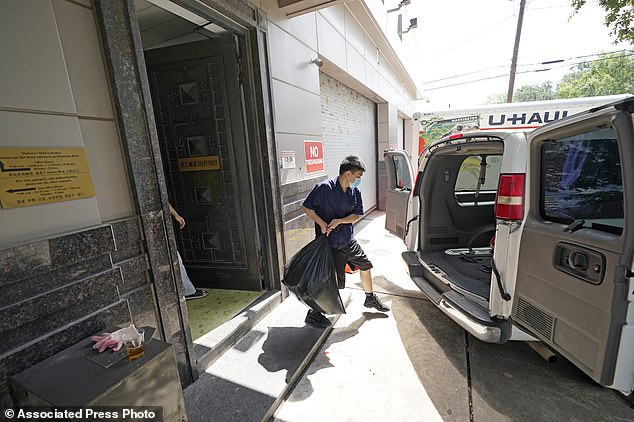 The U.S. alleged Chinese agents tried to steal data from American facilities. A man is pictured loading the back of a van with a bag from inside the Chinese Consulate in Houston

Relations have deteriorated in recent weeks in an intensifying standoff between Washington and Beijing, with the Chengdu mission ordered to shut as retribution for the forced closure of the Chinese consulate in Houston.

A State Department spokesman told AFP the mission’s diplomats and their dependents would leave China by August 27.

As of writing, Tzu-I’s husband Jim Mullinax is still listed as the Consul General in Chengdu on the website of US Embassy and Consulates in China.