Wife who gave slice of inheritance to builder to hide it from husband is left £600,000 out of pocket

A wife who gave £600,000 to a ‘friendly’ builder so she could hide the cash from her husband is still out of pocket two years on – as he refuses to return the money.

Sarah Byrne, 47, had been left a £1million inheritance from her father’s business, and was anxious to keep it from husband Tony, who she wanted to divorce.

Builder and designer Stephen Howie, 58, kindly said she could transfer £600,000 to him, which she did in January 2017, and he would return it on demand.

Sarah Byrne, 47, (pictured with husband Tony) who gave £600,000 to a ‘friendly’ builder so she could hide the cash from her husband is still out of pocket two years on – as he refuses to return the money

But the whole plan fell apart when Mr and Mrs Byrne went on a family holiday the next month, fell in love all over again, and agreed to stay together.

Mrs Byrne asked Mr Howie for her money back – but he refused, claiming the cash was an investment. This week, a High Court judge in London ruled that Mr Howie is lying and has now ordered him to give the money back.

But the builder has fled to Japan, and has been refusing to cooperate. According to court papers, ‘he emailed to say he was living in Japan, had recently had surgery, was unwell, and would not be attending’.

Mr Howie said in the email: ‘I did nothing wrong.’

Despite winning her case, Mrs Byrne was described in the court judgment as ‘dishonest’ for trying to hide the money in the first place.

She and her Oxford graduate husband Mr Byrne, also 47, moved to Camberley in Surrey with their three children four years ago.

The next year they considered building an extension, and got a quote from local builder and designer Steve Howie, a father of six.

Although they did not go ahead, Mrs Byrne considered him a friend – and turned to him as a shoulder to cry on when she decided to divorce her husband, a chief finance officer at a technology firm.

She was particularly concerned about the huge lump sum she had recently acquired. 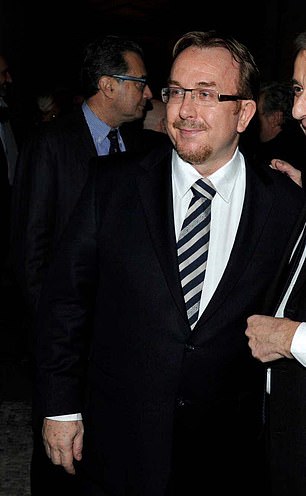 Builder and designer Stephen Howie, 58, kindly said she could transfer £600,000 to him, which she did in January 2017, and he would return it on demand

London High Court judge Simon Monty QC said in his judgment: ‘Mr Howie said he had been through two divorces, and advised [Mrs Byrne] she needed to place her assets out of reach of her husband, because he would get half.

‘Mrs Byrne says that she was anxious, depressed, isolated and sleep-deprived, and the advice Mr Howie gave her increased her feelings of anxiety. She feared she would be left with nothing after the divorce.’

Before long Mr Howie – who studied architecture in South Africa before settling in Camberley – had told the desperate housewife that a judge friend of his advised divorcees to ‘gift’ money to a friend, and simply get it back when the divorce was complete.

‘Mr Howie offered to take some of the money on that basis,’ the judge said.

Mrs Byrne transferred £400,000 to her sister and despite her friends advising her not to place any of her cash with Mr Howie, she felt so ‘desperate’ she transferred £600,000 to him in January 2017, the judgment said.

She only did so after he ‘said he would repay it at any time’, and put a letter promising to do so in a safe which he kept.

He also took her children’s passports claiming her husband could whisk the youngsters overseas.

The High Court ruling noted that the builder said he would be safer if he disguised the transfer as an investment in his business, and drew up documents indicating she was buying a 20 per cent share.

Judge Monty noted that if it had been an attempt to hide the cash from Mr Byrne it would have ‘almost certainly failed’ anyway.

But it did not come to that – as the very next month ‘Mr and Mrs Byrne went on a family holiday and they decided to reconcile’.

Mrs Byrne immediately told her husband about the £600,000, and texted Mr Howie to ask for it back.

Mr Byrne instructed solicitors, but still Mr Howie refused to return the cash – and continues to do so.

Judge Monty rejected Mr Howie’s evidence and ruled that although Mrs Bryne’s ‘dishonest’ agreement had been a ‘sham’ designed to conceal the money, it would be wholly wrong for Mr Howie to benefit from it – particularly as the divorce never occurred

He accordingly accepted Mrs Byrne’s case, and ruled that Howie must return the money.

Last night Howie could not be contacted. He is also facing unconnected police action for unfair trading, fraud and money laundering.