Julian Assange could leave the Ecuadorian embassy in London where he has lived for six years ‘any day now’ after the US and Spain increased pressure on the country to stop shielding him.

The Wikileaks founder’s situation at the embassy is ‘unusually bad’, and Mr Assange may be forced out or choose to leave on his own because of extra restrictions.

Mr Assange’s position is ‘in jeopardy’, a source told CNN.

Last week the President of Ecuador, Lenin Moreno, ordered the removal of extra security at the embassy which has cost the country at least £3.7 million.

Julian Assange, pictured in May 2017, could leave the Ecuadorian embassy where he has lived for the past six years ‘any day now’ 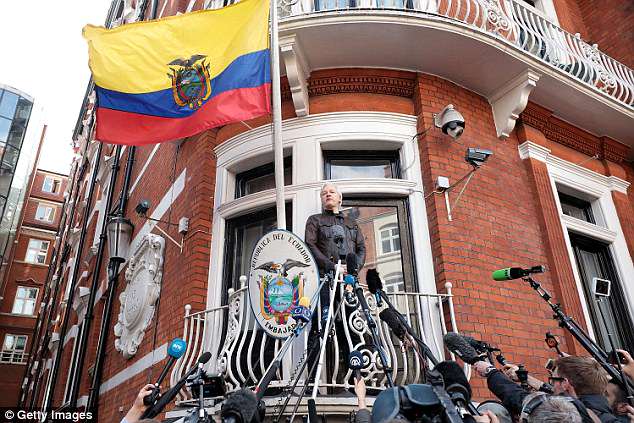 The Wikileaks founder may be forced out or choose to leave after being placed under extra restrictions. His internet access was restricted in March after he tweeted his support of separatist movements in Catalonia, Spain

Mr Assange’s activities, moods, interactions with embassy staff, his legal team and other visitors were monitored by security personnel and recorded in minute detail.

The operation to protect Mr Assange had the approval of the then Ecuadorian president Rafael Correa and the then foreign minister Ricardo Patino.

But the Ecuadorian government have now said that the London site ‘will maintain normal security similar to that of other Ecuadorian embassies’ going forwards.

In January Mr Moreno described Mr Assange as an ‘inherited problem’ and ‘more than a nuisance’.

Mr Assange’s internet access was then cut off in March and restrictions were placed on who can visit him after he tweeted his support for separatist movements in Catalonia in Spain.

As part of an agreement between Mr Assange and the Ecuadorean government, he is not permitted to send any messages that could interfere with the South American nation’s relations with other countries.

If Mr Assange leaves the embassy he could be arrested by British police and extradited to the US and imprisoned over WikiLeaks’ publication of secret US military documents and diplomatic cables in 2010. 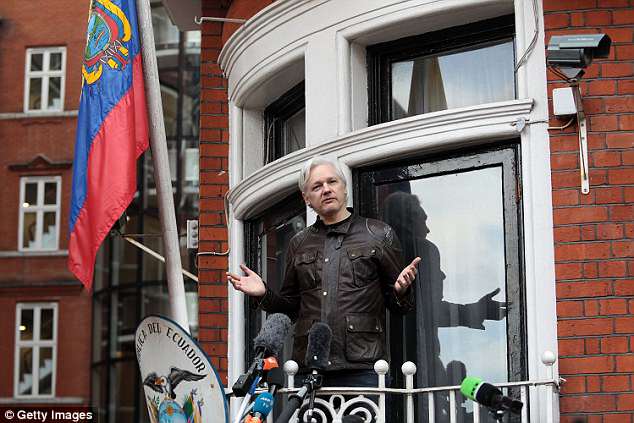 Last week the President of Ecuador, Lenin Moreno, ordered the removal of extra security at the embassy which has cost the country at least £3.7 million

The 46-year-old Australian took refuge in the small diplomatic headquarters in 2012 to avoid sexual abuse charges in Sweden, which he has always denied.

Prosecutors have since abandoned their investigation, but British authorities are still seeking his arrest for breaching bail conditions.

Mr Assange’s lawyer, Melinda Taylor, told CNN: ‘For the last eight years, the UK has refused to either confirm or deny that they have received an extradition request from the US. 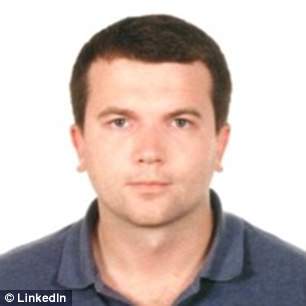 ‘At the same time, they have refused to provide assurances that Julian will not be extradited to the US if such a request were to be received, and maintained an ever-present vigil of the Embassy, notwithstanding a UN directive to take steps to ensure Julian’s immediate liberty.

‘Their silence speaks volumes, particularly in light of recent statements from US officials that Julian’s arrest and extradition are a priority.’

In total 80 people visited Assange at the Ecuadorian embassy in the summer of 2016, which was around the time when Assange announced he was going to release emails from Hilary Clinton’s US presidential campaign.

Journalists from RT, which US intelligence officials have described as Vladimir Putin’s ‘principal international propaganda outlet’, were particularly prominent on the guest list.

Pamela Anderson has also been a regular visitor of Mr Assange, and she called on Kanye West to help ‘set him free’ earlier this month.

‘I support him and I know you value Free Speech – Visibility is good for him especially in America. Where they are trying to put him away for life or worse for exposing corruption in governments,’ Anderson wrote.

‘He’s been locked in a small room for almost 6 years in London at the Ecuadorian Embassy. And now he can have no visitors. No phone calls or internet. They are squeezing him.’

In her letter, Anderson explained that she wanted more people to discuss Assange’s situation: ‘So I want to seek more voices and share more about his fight. Public support could set him free. Media is monopolized So some brave voices are the only Hope to break through.’

Anderson went on to say that she always supported Kanye’s ‘no filter’, adding that ‘you make an impact’. 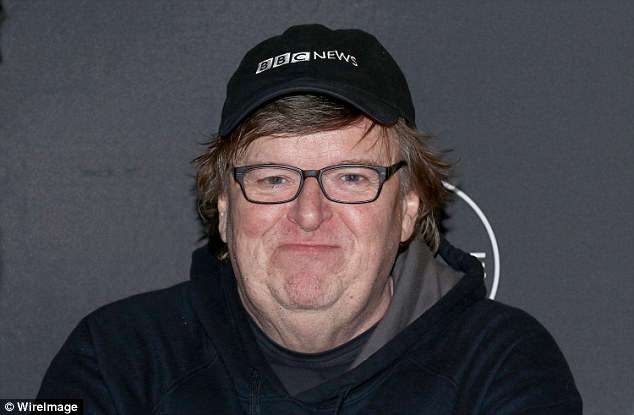 Michael Moore (pictured in New York on October 23, 2017) was one of Assange’s visitors during the summer of 2016

Julian Assange’s fight for freedom: How is the WikiLeaks founder still holed up in an embassy after nearly six years?

August 2010 – The Swedish Prosecutor’s Office issues an arrest warrant for Assange for two separate allegations – one of rape and one of molestation. He denies both.

December 2010 – Assange is arrested in London and bailed.

May 2012 – Supreme Court rules Assange should be extradited to Sweden.

June 2012 – Assange take refuge in the Ecuadorean embassy on Hans Crescent in Knightsbridge. 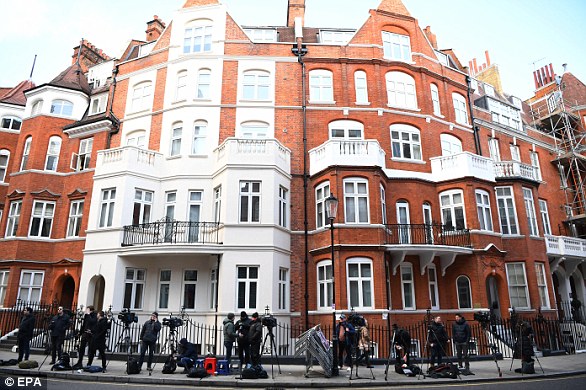 The Ecuadorian embassy in Knightsbridge, which has been Assange’s home since 2012

August 2015 – Swedish authorities announce they will drop allegations of sexual molestation because they no longer have any time to question him. The rape allegation stayed in place.

October 2015 – Britain calls off its round-the-clock police guard outside the embassy after three years and an estimated cost of £12m.

February 2016 – UN panel rules that Assange has been ‘arbitrarily detained’ by both Swedish and UK authorities.

May 2016 – A cat takes residence in the embassy with Assange.

May 2017 – Swedish prosecutors announce rape allegation has been dropped.

January 2018 – Assange’s lawyers argue that the arrest warrant for skipping bail was no longer relevant and should be withdrawn.

February 2018 – Westminster Magistrates’ Court rejects the claim and insists the warrant is still in place.