Wilbur Ross speaks in Davos after claims he drools

Commerce Secretary Wilbur Ross is putting on a demonstration of his relevance to the Trump administration with multiple appearances in Davos, after a report that he sleeps and drools in meetings.

Ross took appeared with Treasury Secretary Stephen Mnuchin at a press conference to kick off the annual confab in the Swiss Alps, then made a beeline to CNBC for a televised appearance.

Ross was asked by Andrew Ross Sorkin on CNBC’s Squawkbox to respond to a report from Axios that he had been ‘sidelined’ and ‘dressed down’ by the president over trade deals.

‘First of all, the president responded very explicitly that he was one hundred per cent in report,’ Ross said.

He characterized the report as coming from ‘anonymous sources and former administration officials’.

But when he was asked what Trump’s speech at Davos would consist of he answered: ‘You’ll have to ask his people.’

‘He loves Wilbur, thinks he’s doing a great job and has been a strong advocate for the administration and been a great leader,’ press secretary Sarah Huckabee Sanders said.

Axios reported the president has been on the outs for months with Ross, the 80-year-old billionaire who heads Commerce Department. The report claimed Ross tended to fall asleep and drool in meetings.

Ross also played down Trump’s America First agenda, saying of slapping tariffs on washing machines and solar panel: ‘I don’t think it symbolizes anything. Those cases have been ongoing for quite a while.’ 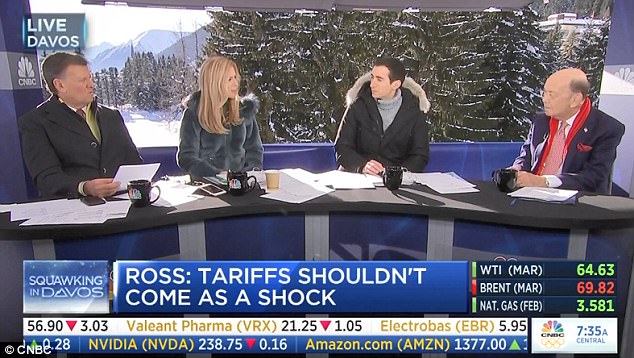 Commerce Secretary Wilbur Ross has been visible in Davos

Ross said that Trump was not on a collision course with the globalists at Davos suggesting the White House was simply standing up for fair trade.

‘I think we are all in favour of open borders but it has to be a two-way street,’ he said.

‘That is why we brought 84 trade cases this year. We don’t invent the trade infractions that were there.’

And he said there was a ‘good chance’ of renegotiating NAFTA, which Trump has threatened to pull out of, saying that elements of it were clearly ‘archaic’