Wild animals dragged human remains linked to missing British hiker Esther Dingley from an unknown place in the Pyrenees to the busy walking path where they were discovered, investigators claimed today.

The grim theory was suggested by French police, investigating the disappearance of the 37-year-old Oxford graduate who was last seen in late November.

There was a major breakthrough on Friday when a skull with long hair was found close to Port de la Glere, a mountain pass on France’s border with Spain, just south of Bagneres-de-Luchon. The trail is known as Puerto de la Glera in Spanish.

Commander Jean-Marc Bordinaro, who has been involved in the search from day one, said: ‘This is indeed the area that Esther Dingley was supposed to be in when she disappeared, but we need to be cautious while the identification process is underway.

‘Everything suggests that these bones were recently moved by animals. They would not have been there a few days earlier,’ he added.

Brown bears and wolves are among the creatures roaming freely in the mountain range, where birds of prey such as vultures are also a common sight.

The remains were being investigated on Monday by forensics experts, exploring a possible match to DNA provided by Ms Dingley’s mother, 74-year-old Ria Byrant.

Ms Bryant has also confirmed that a scan of her daughter’s teeth had been requested by the French, through the British consulate in Bordeaux.

Wild animals dragged human remains linked to missing British hiker Esther Dingley (pictured) from an unknown place in the Pyrenees to the busy walking path where they were discovered, investigators claimed today 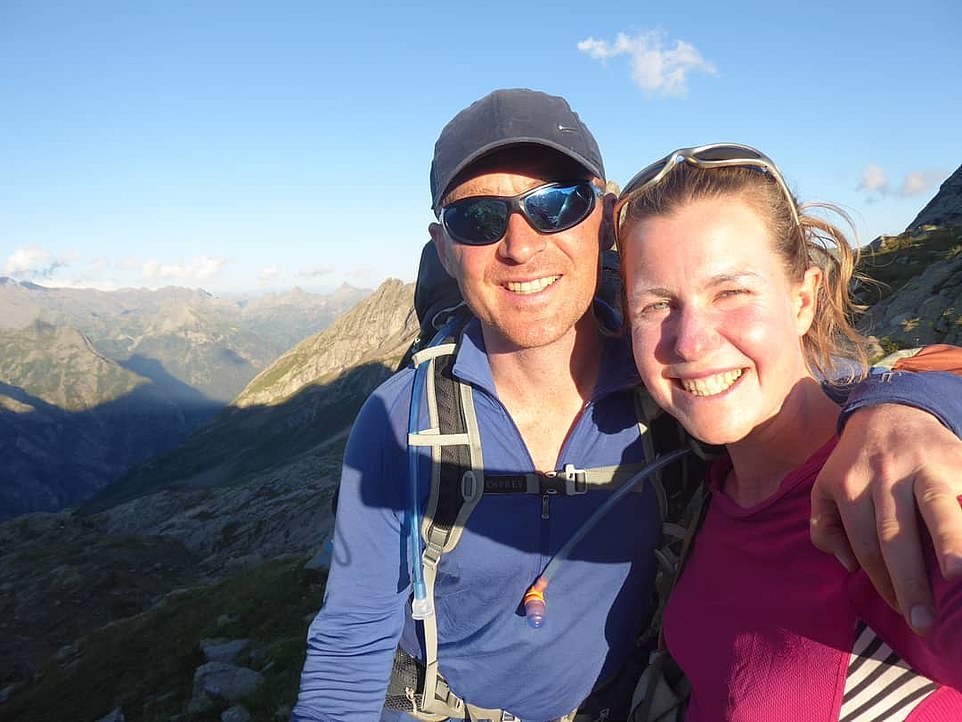 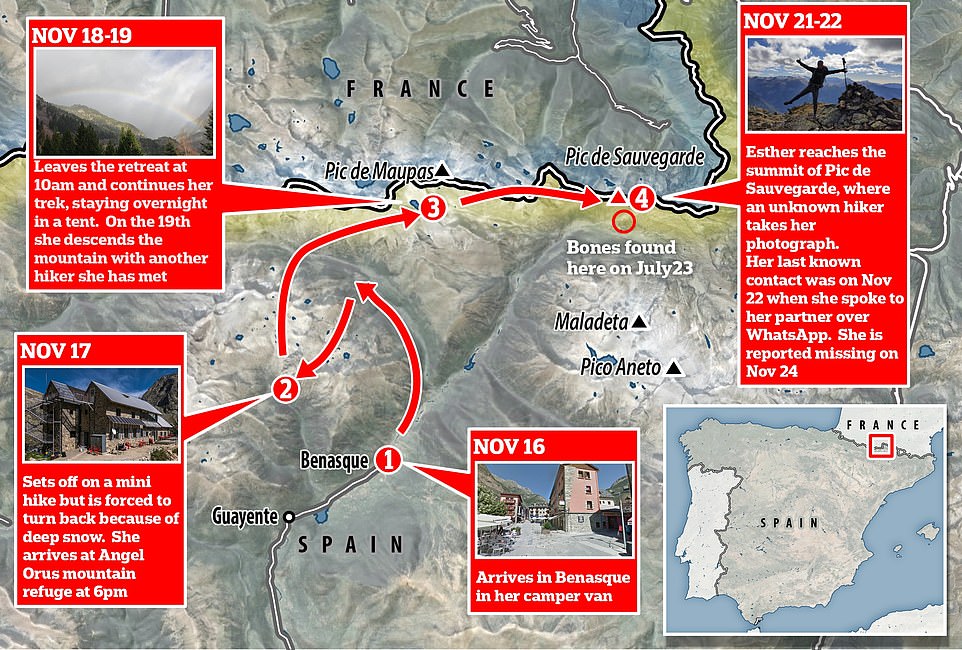 There was a major breakthrough on Friday when a skull with long hair was found close to Port de la Glere, a mountain pass on France’s border with Spain, just south of Bagneres-de-Luchon. The trail is known as Puerto de la Glera in Spanish

Commander Bordinaro confirmed that police on both sides of the border were carrying out urgent searches to see if they can trace where the skull and related bones may have been hidden.

Ms Dingley was carrying a distinctive yellow tent, and had a bright red-and-grey rucksack with her when she went missing, but no trace of either has been found.

Both are made of hardwearing material that would last for years out in the open, including in the rugged Pyrenees countryside.

Commander Bordinaro said his colleagues were contacted by Spanish police on Friday afternoon, after the remains were discovered at about 2pm.

He had previously admitted that it was ‘very likely’ that Durham-born Ms Dingley had been involved in a mountain accident, and had been unable to raise help.

The search for her was called off in February because of deteriorating weather, but it resumed in the Spring.

An investigating French source on Saturday said there was no ‘immediate proof as to the identity of the remains’ and that ‘a medico-legal procedure will be followed to establish the identity of Person X in the days ahead.’

Specialist forensics officers from the General Directorate of the National Gendarmerie (DGGN) will carry out the task, under the supervision of France’s Interior Ministry and an examining magistrate.

Up to 3,000 unidentified bodies are found in France every year, including ones in vast rural areas such as the Pyrenees, said the source.

‘Prosecutors order analysis in the case of suspicious death, and that is when the entire procedure starts,’ said the source.

‘Genetic and dental material is gathered before burial can be allowed. It is a potentially complex procedure.’ 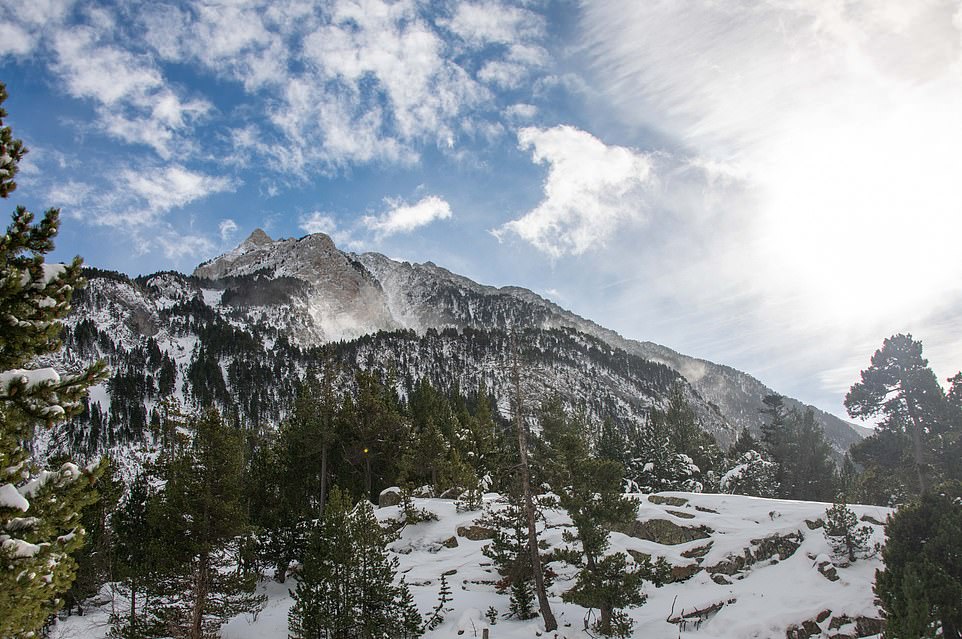 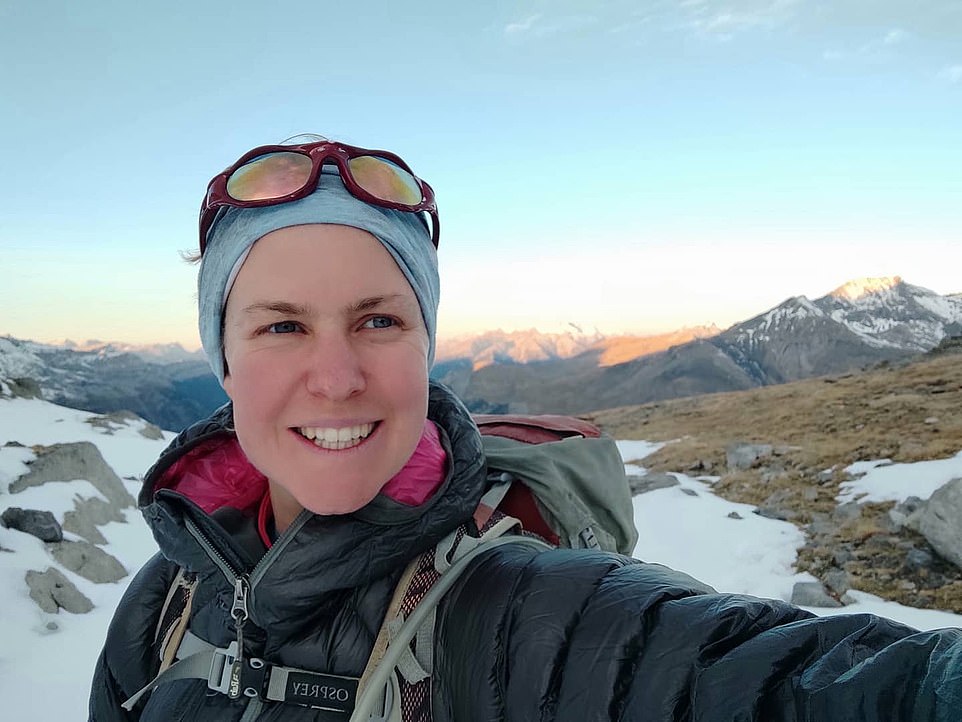 Specialist officers from Spain and France have carried out several searches of the area around the Puerto de la Glera hiking trail, where Ms Dingley was hiking before she went missing. Searches recently resumed after being called off due to bad weather

DNA analysis is considered the most accurate part of the identification process, but samples are not always available to pathologists if a body is badly decomposed, or reduced to bone, said the source.

Christophe Amunzateguy, the chief public prosecutor of Saint-Gaudens, has been informed about the discovery of the remains, and was liaising with police investigators this weekend.

Ms Dingley had been planning to cross back into Spain after spending a day hiking on the French side of the border before she went missing.

Her last known contact was a WhatsApp call with Mr Colegate from the summit of the Pic de Sauvegarde, where she took a selfie.

The two Oxford graduates had been travelling around Europe in a camper van for years after quitting their careers and Durham home.

Missing persons charity LBT Global, which has been supporting Mr Colegate and Ms Dingley’s family, said that confirmation of whether the possible human remains were a match would take ‘days or even weeks’.

Guilhem Garrigues, the keeper of the Venasque refuge on the French side of the border where the British hiker had planned to spend the night, theorised on Sunday that Ms Dingley could have fallen in snow.

He explained that the paths she was believed to have taken were clear on the Spanish face of the mountains, but could have remained covered in snow around the Puerto de la Glera pass, where the slopes are normally shaded and which could have taken her by surprise.

The keeper – who handles hosting, maintenance and cooking duties at the refuge – added police had resumed searches for Ms Dingley two weeks ago after the winter snows melted and that officers told him they believed it likely her remains would be discovered by the public by chance.

Mr Garrigues told the Times newspaper: ‘The hike is easy in the summer and there are about 20 people who do it every day. But in the winter it changes completely. It’s steep and anyone can make a mistake and slip, or be unbalanced by a gust of wind.’

Meanwhile Ms Dingley’s family said in a statement they are ‘urgently seeking clarification’ after the bones were found on Friday near where the hiker was last seen.

Mr Colegate wrote in the 23-page report about Ms Dingley’s plans to do a circular hike between Spain and France which involved sleeping at a mountain refuge.

He said in his dossier: ‘An individual that Esther met on November 19 came forward to say he had specifically suggested this route through France, between Port de Venasque and Port de la Glere, to Esther when he met her.  There is no reason to think that Esther did not stick to this plan.’ 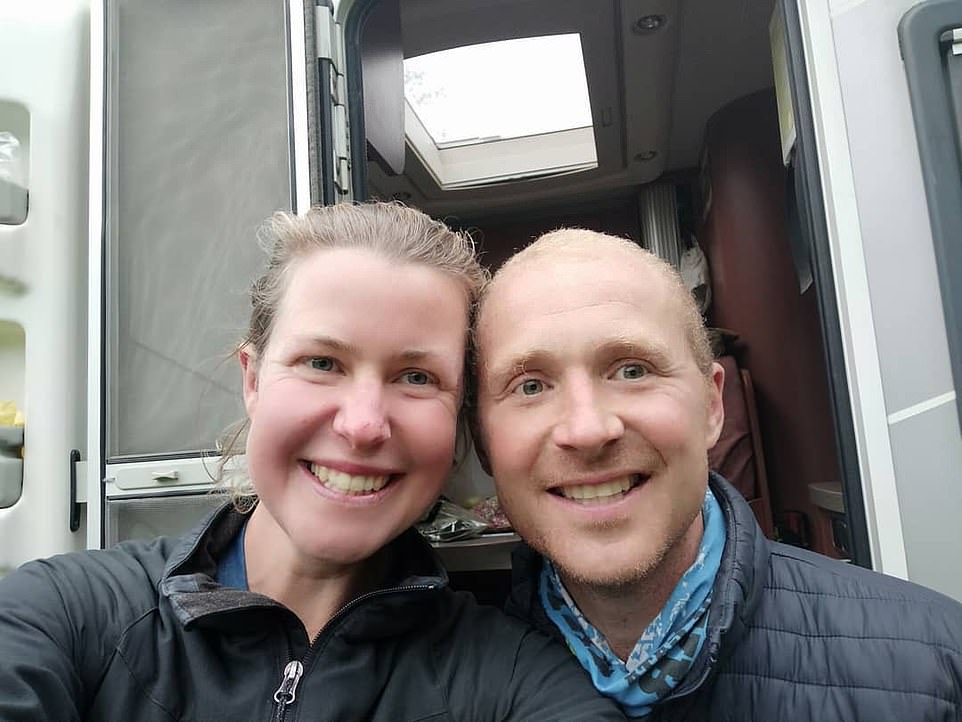 In a section titled ‘Esther’s Planned Onward Route’, he suggested she reached the mountain refuge in France and slept there overnight before continuing a hike to return to her initial starting point in Spain.

He said: ‘Her onward route would have involved a descent northwards towards the Hospice de France, a flat traverse westwards around the Imperatrice Way, and a climb southwards to the border at Port de la Glere.  From the border the route descends back towards Hospital de Benasque.

‘This route would have been well within Esther’s capabilities for a day hike, in addition to the fact she had a tent, camping equipment and significant experience using it.

‘Distance was 16km with 1100 metres of ascent, five to seven hours of hiking time.  The weather remained excellent that Monday. The route is very obvious on the ground and also from the terrain when starting from Refuge de Venasque.

‘It’s basically impossible to get lost in good visibility here.  The entire route is a well-made and easy to follow path.  Although Esther believed and had warned family that there was poor signal in the area, in fact the signal is very good on the French side.

‘Within half an hour of leaving the refuge, Esther should have been able to use her phone for most of the rest of the day.’

Officers from Spain’s Civil Guard went to the spot but alerted their French counterparts after confirming it was on the other side of the border.  One unconfirmed local report said the unnamed runner had come across a human skull.

A Spanish radio station covering the province of Huesca, which includes the town of Benasque where Ms Dingley began the hike she vanished on, said: ‘Sources close to the investigation have indicated that the skull could correspond to Esther Dingley’s because of the colour and length of the hair.’

Civil Guard sources said on Saturday officers were ’90 per cent certain’ the bones found were human remains but insisted the job of analysing them for confirmation and more clues was now a French task.

LBT Global said in its first written statement overnight: ‘LBT Global is aware of the discovery of what may be human remains close to the last known location of Esther Dingley.

‘We are urgently seeking clarification. The family have been informed of the discovery and we are supporting them now. 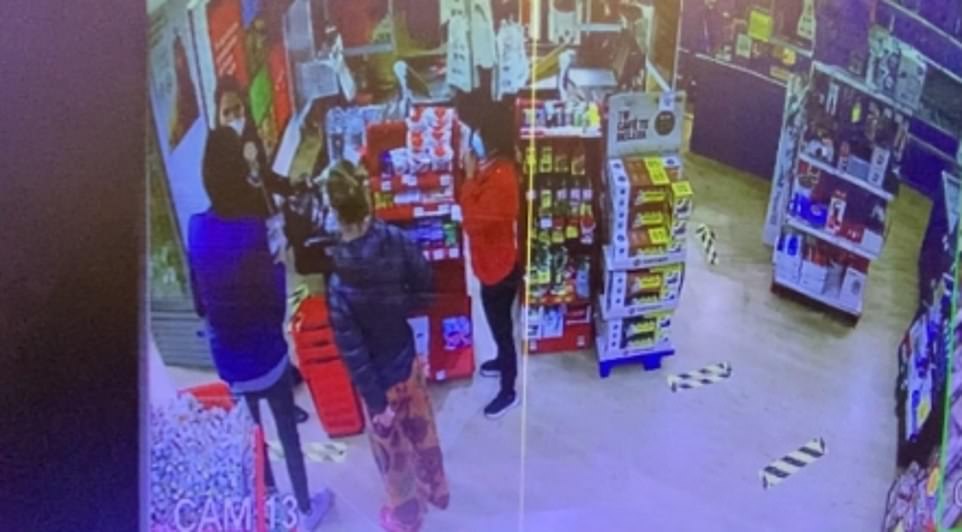 British hiker Esther Dingley was seen at Eroski supermartket in Benasque, Spain, on Novermber 19, days before her sudden disappearance

‘Until anything is confirmed there will be no statement or interviews with any family members. Please be aware this may take days or even weeks.’

Specialist officers from Spain and France have carried out several searches of the area where Esther was believed to have gone missing.

A co-ordinated air and land search by police mountain rescue experts from both countries took place on July 1.

Civil Guard sergeant Jorge Lopez Ramos, whose Greim elite mountain search and rescue team led an eight-day search for Ms Dingley on the Spanish side of the border before it was halted last December because of bad weather, confirmed late last year Puerto de la Glera was on the route Esther told her boyfriend she was planning to take before she disappeared.

Referring to the mountain pass by its Spanish name, he said at the time: ‘Esther told her partner she was planning to spend the night in a nearby refuge on the French side of the border called Venasque before doing a long half-circle to re-enter Spain through a mountain pass called Puerto de la Glera and heading back down to Llanos del Hospital.

‘It would have been a long day’s walk or she could have spent the night somewhere and finished the following day.

‘We don’t know if she reached Venasque that night. It’s shut at the moment and only an emergency part of it is open for people to sleep in and consume any food they have with them.’

Amunzateguy, the chief public prosecutor of Saint-Gaudens, is expected to make an official statement if there are any updates to the case.

Spanish Civil Guard said the discovery was a matter for the French police to comment on as the bones had been found on their side of the border.