Karthik Nemmani didn’t win his regional spelling bee. He didn’t even win his county spelling bee. But he was still good enough to win the Scripps National Spelling Bee.

Throwing everything he had into his one shot at glory, 14-year-old Karthik outlasted better-known spellers on Thursday night and became the champion after a dramatically abrupt end to the competition, when 12-year-old Naysa Modi misspelled the word ‘Bewusstseinslage’ in the first championship round.

Karthik had to spell two words correctly to seal the title, which he did with ease, and the lanky, soft-spoken Texan stepped back and smiled as he was showered with confetti. His winning word was ‘koinonia,’ which means Christian fellowship or communion.

Karthik is from McKinney, Texas, and Naysa lives in Frisco, Texas – both suburbs of Dallas – and Naysa topped Karthik at their county bee.

‘She’s a really, really good speller. She deserved the trophy as much as I did,’ Karthik said. ‘I got lucky.’

He said there were eight or nine words during the prime-time finals he didn’t know – a rare admission for a national champion.

In the past, losing at the county level would have made Karthik ineligible for nationals, but he got in through a wild-card program that was instituted this year. The wild cards pushed the total number of spellers in the bee to 515 – there had never been more than 300 in the past – and forced Scripps to add a third day of competition. Four of the 16 prime-time finalists were wild cards. 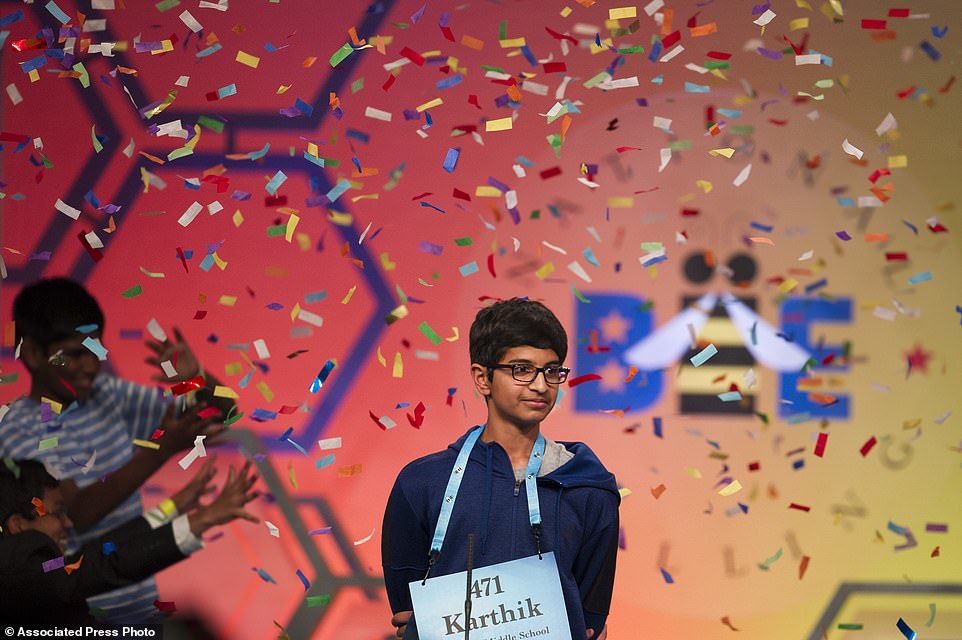 Karthik had to spell two words correctly to seal the title, which he did with ease, and the lanky, soft-spoken Texan stepped back and smiled as he was showered with confetti 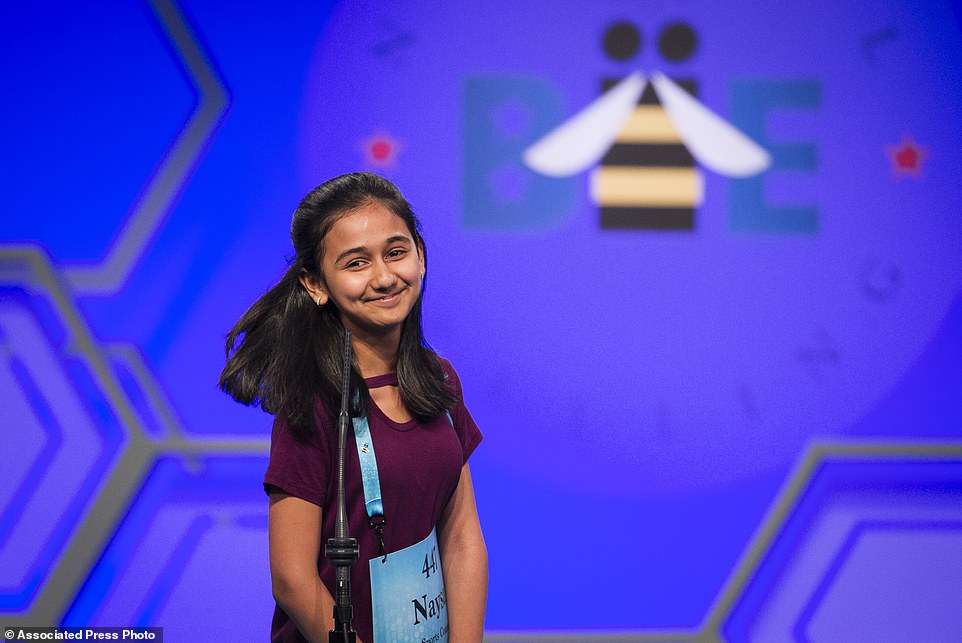 Naysa Modi misspelled the word ‘Bewusstseinslage’ in the first championship round, bringing the competition to an early end

All three top finishers were from the Dallas area. The third-place finisher, 11-year-old Abhijay Kodali, came in second to Naysa at their regional bee, one of just a few that sends multiple spellers to nationals. Dallas has long been one of the most competitive regions in the country, and the lack of opportunity for spellers as talented as Karthik is what led Scripps to create the wild-card program in the first place.

Abhijay’s older sister, Ananya Kodali, was one of those blue-chip Dallas spellers who never made it to nationals – she lost twice at regionals to a speller who ended up finishing fifth on the Scripps stage.

Karthik is the 14th consecutive Indian-American champion, and 19 of the past 23 winners have had Indian heritage. In addition to the trophy, he gets more than $40,000 in cash and prizes.

He showed his aptitude for spelling early, arranging block letters to form the word ‘horse’ at age three, said his father, Krishna Nemmani. But his path to glory was uneven. The family had to move to the Dallas area just so Karthik could attend a school that participated in the Scripps program – and then he ran up against some of the nation’s best spellers at the county level.

‘He deserves it. He would have beaten me, definitely,’ Sri said. ‘That’s one speller I know who’s better than I am.’

Naysa, a crowd favorite and four-time Scripps participant who does taekwondo and performs stand-up comedy, will have to regroup after a bitter defeat and try again next year. She’ll be 13 and in eighth grade, which is the final school year that spellers are eligible. She first competed in the bee as a cherubic 9-year-old.

After her defeat, she was swarmed by dozens of current and former spellers who wished her well, smiling throughout.

‘She was just as graceful as she could be,’ bee program manager Corrie Loeffler said.

Naysa’s close friend, Jashun Paluru of West Lafayette, Indiana, finished fourth, spelling with flair and spending most of his time in between words chatting animatedly with Naysa.

Karthik, for his part, took no extra satisfaction in vanquishing a familiar foe.

‘I wouldn’t say it was revenge,’ he said. ‘We weren’t against each other. We were against the dictionary.’

Words that sound easy to the armchair spellers in the Scripps National Spelling Bee audience aren’t always cupcakes for the elite spellers on stage – and vice versa. Sometimes the longest, most complicated-seeming words can be easily pieced together by kids who’ve memorized roots and understand how words fit together in different languages. Here are some memorable words from Thursday’s finals of the Scripps National Spelling Bee:

A common green newt. Easy, right? Not if you’ve never seen it before – figuring out what letter makes that second vowel sound is the key. Alice Liu of Chesterfield, Missouri, went with “ebbot” – and was eliminated earlier than she was last year in her bee debut. 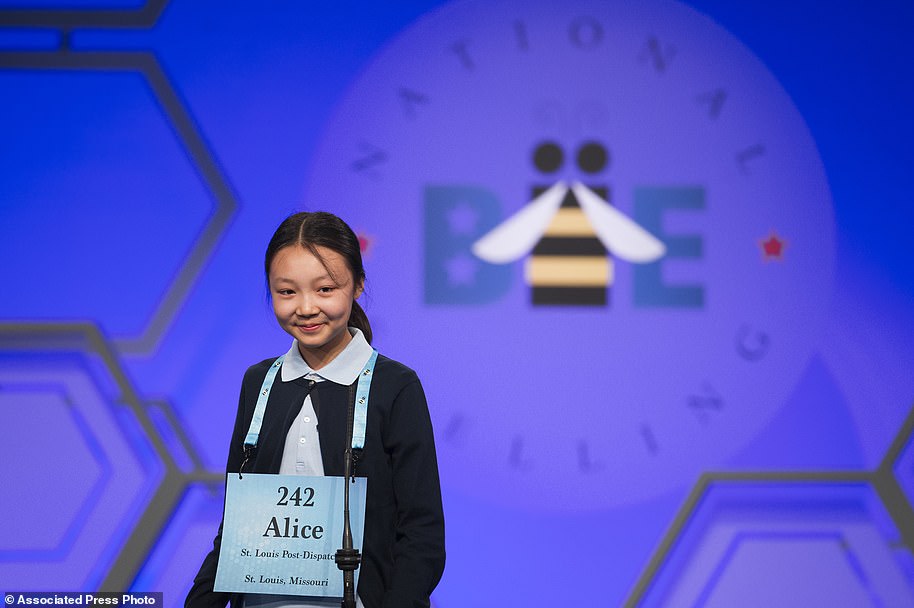 A shoe with a sharp-pointed toe. Navneeth Murali of Edison, New Jersey, spelled it correctly.

Eating mollusks. Nidhi Vadlamudi of Santa Clara, California, used her knowledge of roots and combining forms to spell it correctly.

Feeding on ants. This word allowed Naysa Modi of Frisco, Texas, to offer a master class on the inner workings of a top speller’s brain. “Does this come from the Greek word ‘myrmeco,’ meaning ant?” she asked. Yes, she was told. “And does this come from the Greek root ‘phag,’ meaning to eat?” Right again. From there, spelling the word was a formality.

A crystalline sugar from licorice root. Saketh Sundar of Clarksville, Maryland, misspelled it as “glycericin,” and it was hard to fault him. 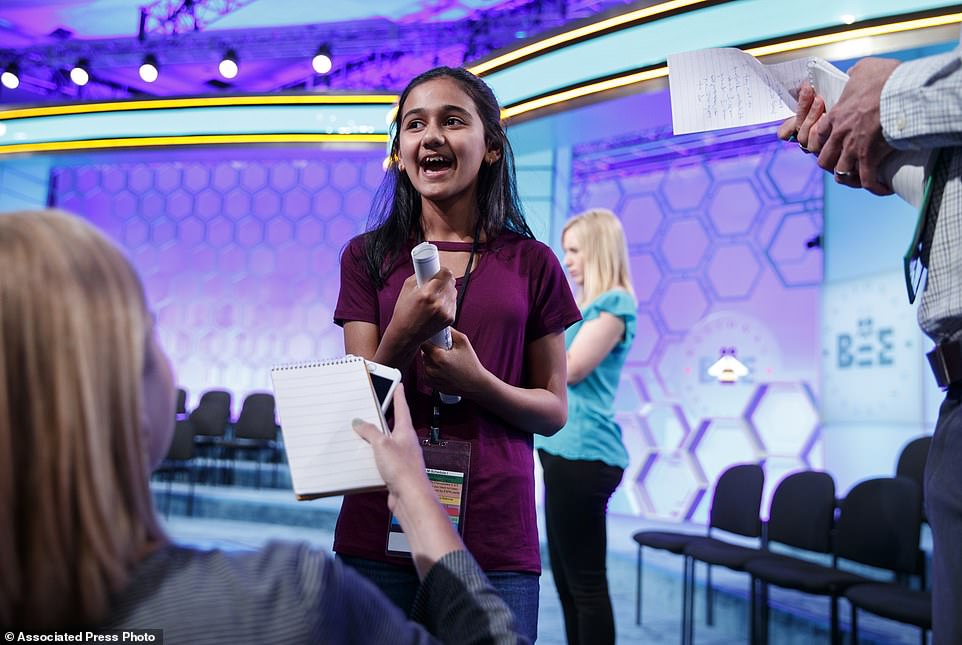 Modi, 12, is interviewed by reporters during a break in the final round 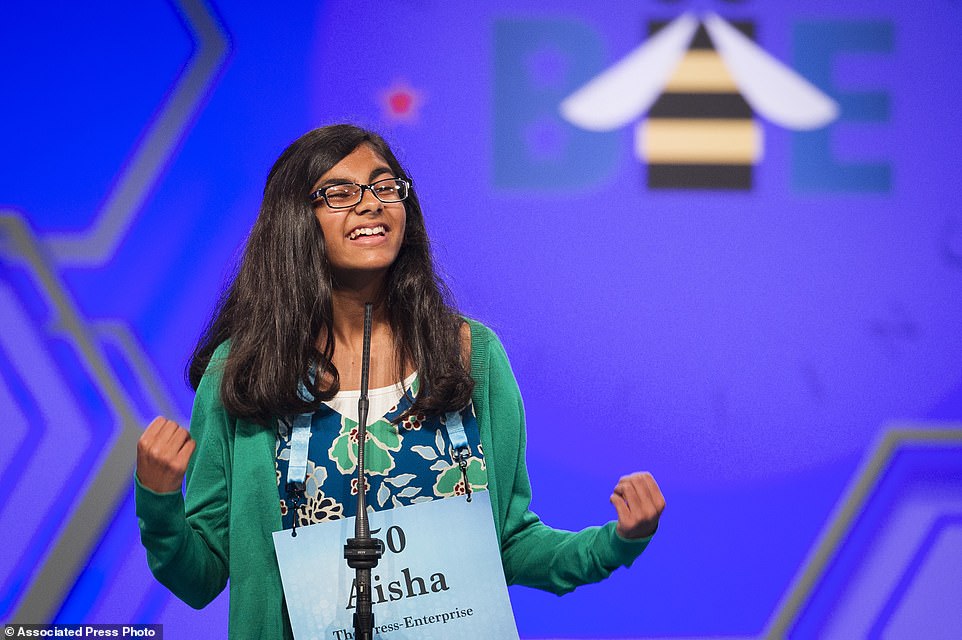 Aisha Randhawa, 12, from Corona, Calif., celebrates spelling her word correctly during the finals 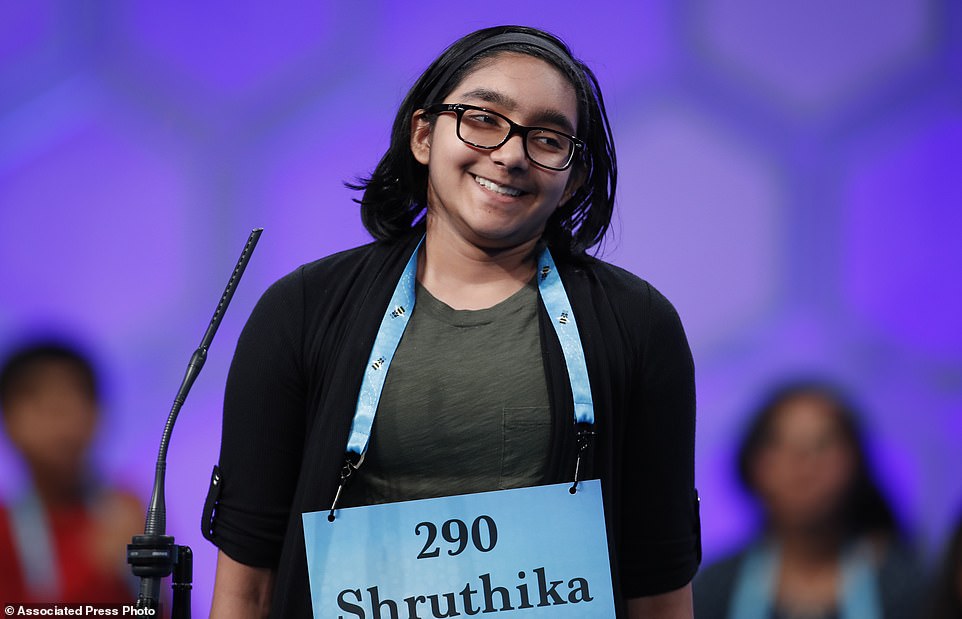 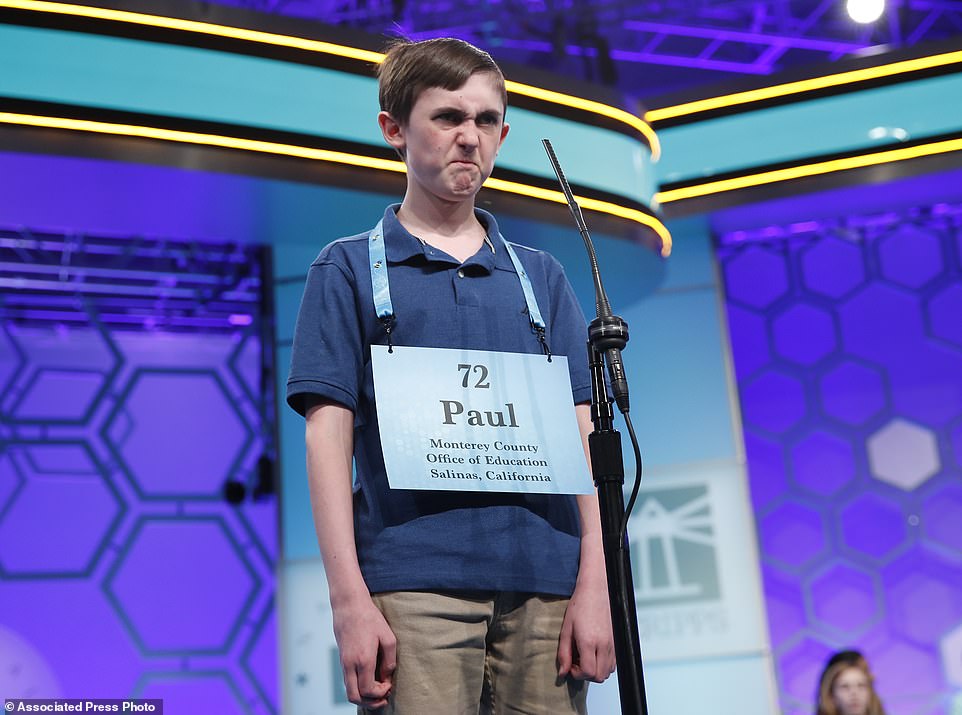 Paul Hamrick, 14, from Monterey, California, pauses during his attempt in the competition 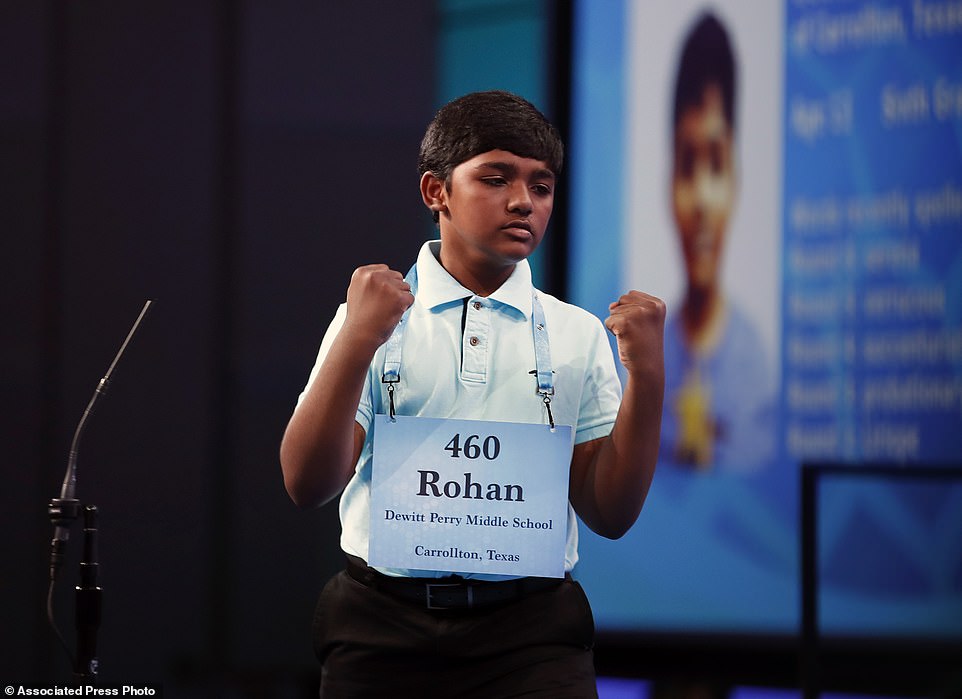 Rohan Raja, 12, from Irving, Texas, pumps his first after getting his word right 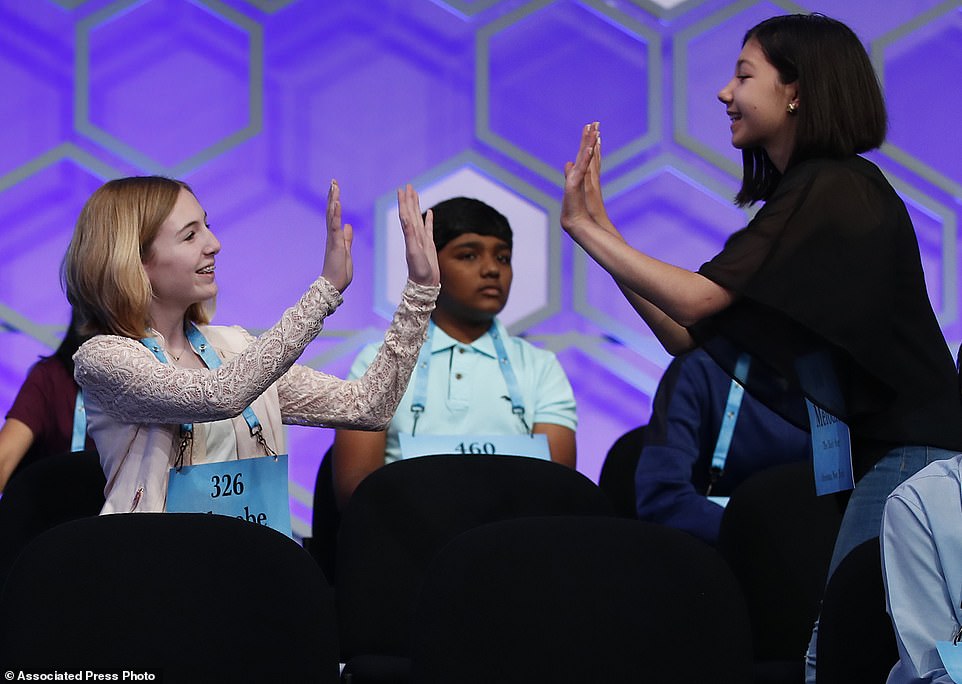 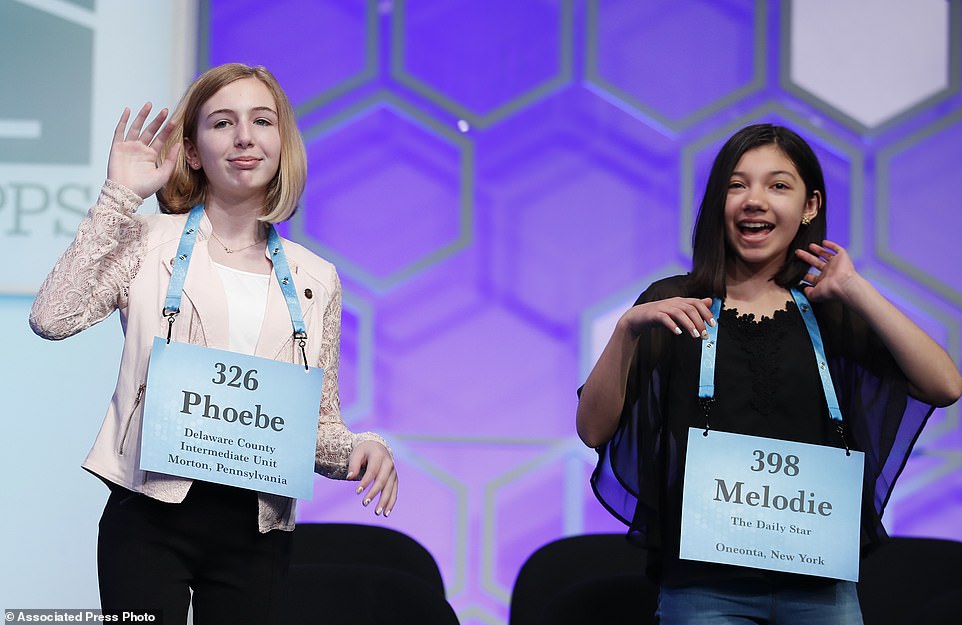 Phoebe Smith, 12, from Aston, Pa., and Melodie Loya, 13, from Bainbridge, N.Y., reacts to the audience during a commercial break during the final round of the Scripps National Spelling Bee in Oxon Hill, Md., Thursday, May 31, 2018. (AP Photo/Carolyn Kaster) 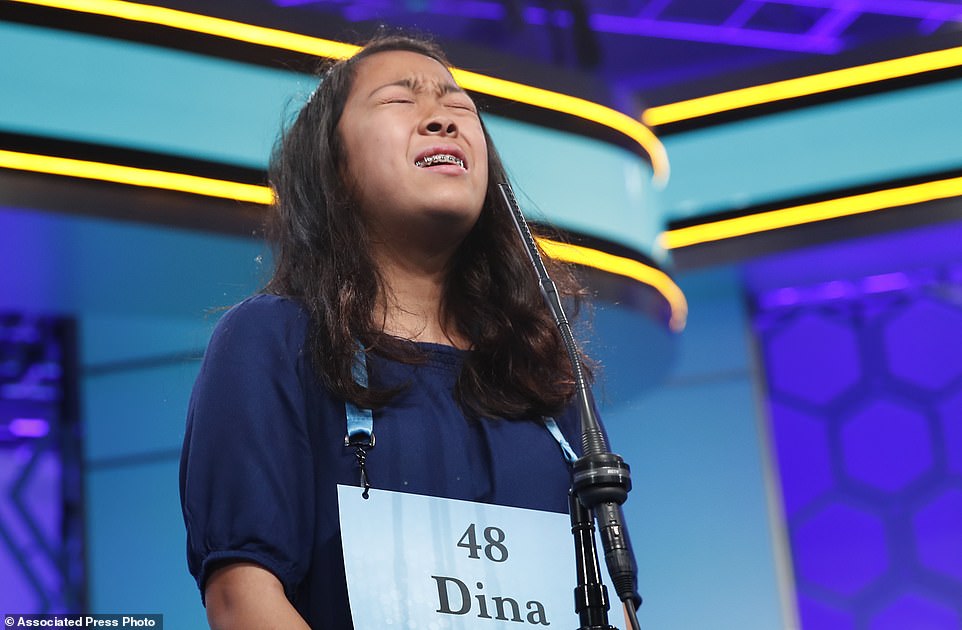 Medina Miranda, 13, from Long Beach, California, reacts to spelling a word incorrectly during the finals 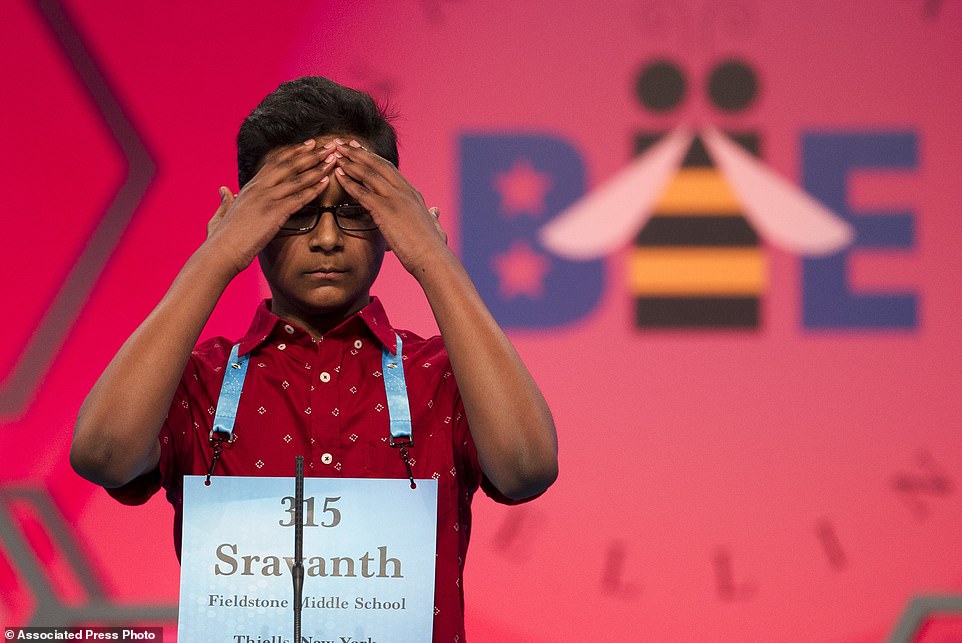 Sravanth Malla, 14, from Haverstraw, New York, hides his head in horror after failing in his attempt 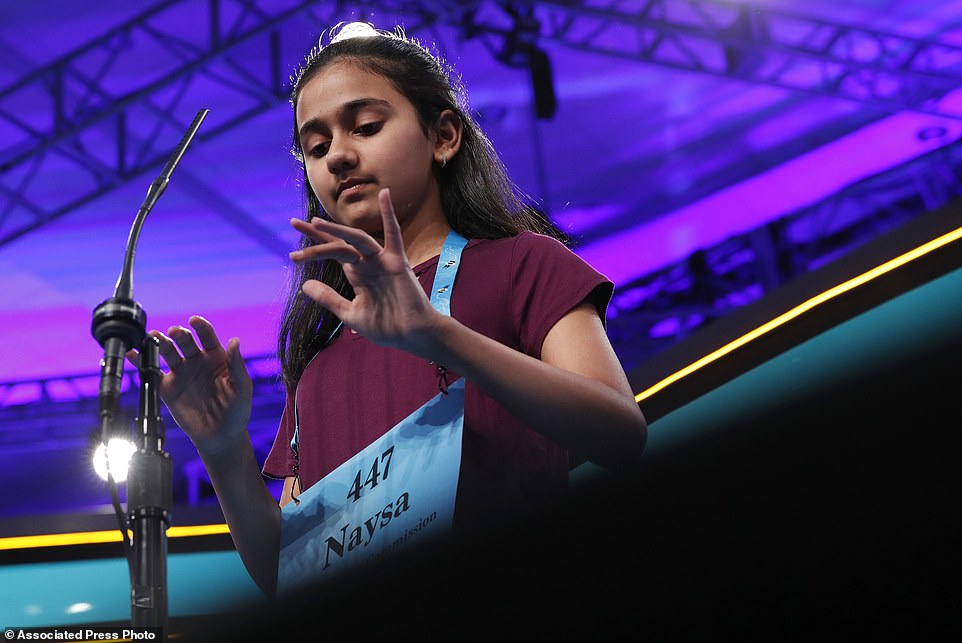 Modi, 12, types her word in the air while spelling correctly during the evening finals 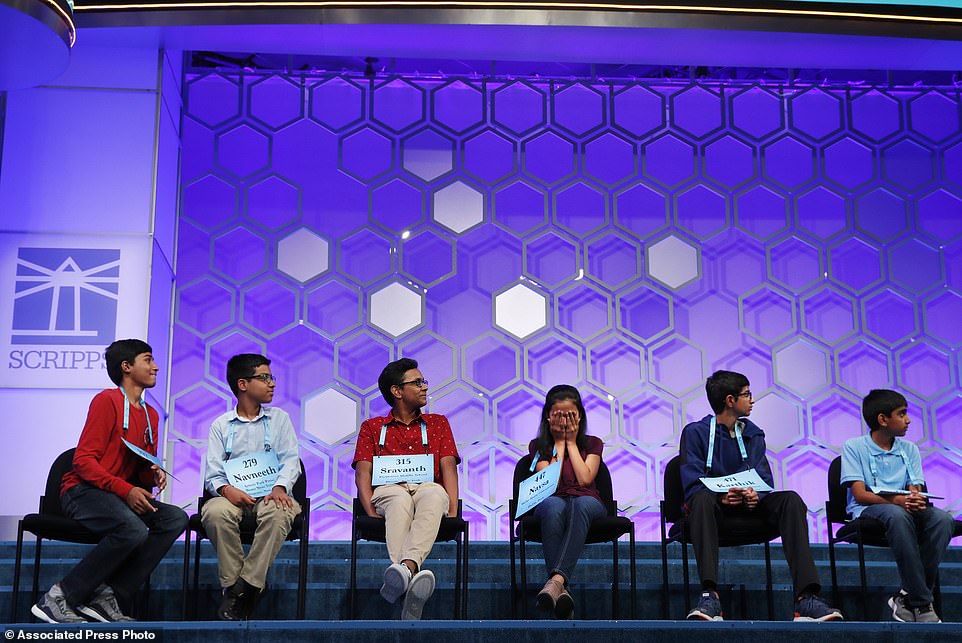