A wild crime spree spreading across Brisbane has resulted in four arrests and two carjackings – one involving a women being threatened with an axe.

About 7.30 on Thursday night a woman was approached by Fallon Samuel Wilton wielding a small axe as she parked her car in North Brisbane, police allege.

He allegedly demanded her keys and then drove off with her car.

The vehicle was then seen by officers in Geebung, who tracked it with the assistance of the police helicopter.

The vehicle was then driven onto the grounds of a school in Kedron.

About 7.30 on Thursday night a woman was approached by Fallon Samuel Wilton (pictured) wielding a small axe as she parked her car in North Brisbane, police allege

Police attempted to stop the car but it then reversed at speed before crashing into the front of a police car.

The car then drove onto a nearby oval where it became stuck, and the four people inside – Wilton, Dailey Eileen Bell, 23, Agatha Akenson, 23, and 27-year-old Daniel John Lander – allegedly tried to flee.

The two women were taken into custody near the car, but Wilton and Lander ran to Colac Street in Kedron.

Police chased the men, and managed to arrest Lander.

Wilton is alleged to have continued to flee, and approached a man in front of his house on Colac Street and demanded his car.

Wilton is alleged to have then got into the car, locked the doors, and refused to exit once police arrived.

He allegedly threatened police with a hammer before a police dog was let into the vehicle and bit the man on the arm.

Police were then able to disarm Wilton and took him into custody.

He did not require transportation to hospital for treatment after the bite.

A 27-year-old man was charged with dangerous operation of a motor vehicle, armed robbery, unlawful use of motor vehicle, failing to stop, possessing dangerous drugs, wilful damage and driving without a licence. 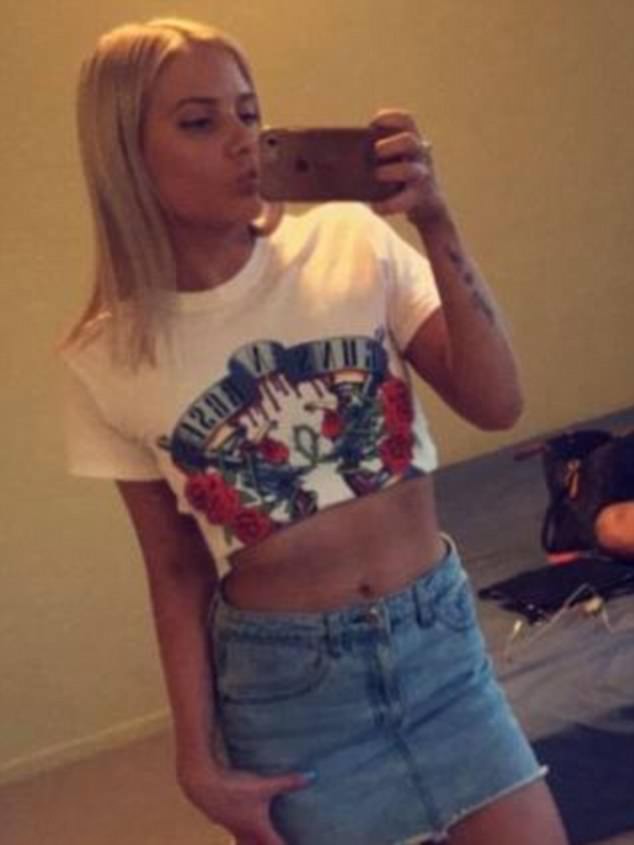 Agatha Akenson, 23, is one of the women who has been charged

A 25-year-old man was charged with serious assault, armed robbery, attempted robbery, wilful damage and unlawful use of a motor vehicle.

All four appeared in Brisbane Magistrates Court on Friday.

The women were granted bail while the men were remanded in custody.