Wild footage has gone viral on social media of a man being punched in the face after appearing to spit at a security guard outside a Northern Territory pub.

A young man in a black T-shirt with a yellow baseball cap on backwards can be seen mouthing off to bouncers at the entrance to the Landmark Hotel in Palmerston, south of Darwin.

Three security guards in purple T-shirts and a man in black line the entrance stairs as the man can be seen arguing aggressively.

He lunges forward rapidly twice in what appears to be a spitting motion.

Immediately after the second lunge, a security guard punches him hard in the face.

The man stumbles backwards to the street but remains on his feet and puts his fists up like a boxer.

The three bouncers  then tackle the man in a rush, restraining him on the ground.

The man in black and another bouncer stand over the man observing him as a worried passer-by in a striped T-shirt comes to investigate.

The man in the yellow baseball cap could be seen shouting at a group of bouncers at the entrance steps to The Landmark Hotel in Palmerston, NT 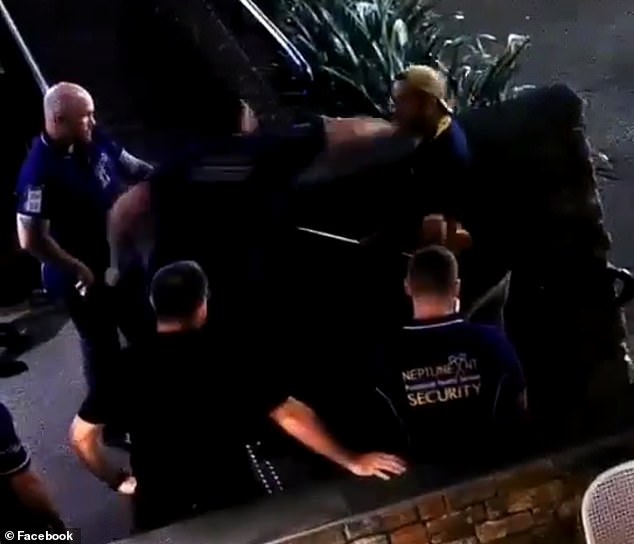 After the man appeared to spit at the security guard, the bouncer punched him in the face

Patrons then scream at security over the loud noise of the pub, while the person filming with the mobile phone can be heard laughing.

The undated video quickly went viral on satirical Facebook page The Mango Inquirer where it got 337 comments and 73 shares in less than a day – a lot for the Northern Territory, which has a small population of a bit over 240,000 people.

One commenter, claiming to have knowledge of the incident, said it had been 11pm and the guy was ‘talking s**t’ after being ‘asked to leave nicely with his misses’.

The commenter said the man’s girlfriend couldn’t get him to leave so she abandoned him moments before the footage captured the fight.

Some commenters were in favour of the bouncers’ actions calling it a ‘good clean takedown’ in response to ‘spitting and threatening’.

Others said the bouncer who threw the first punch ‘should be sacked’ and should have called police instead. 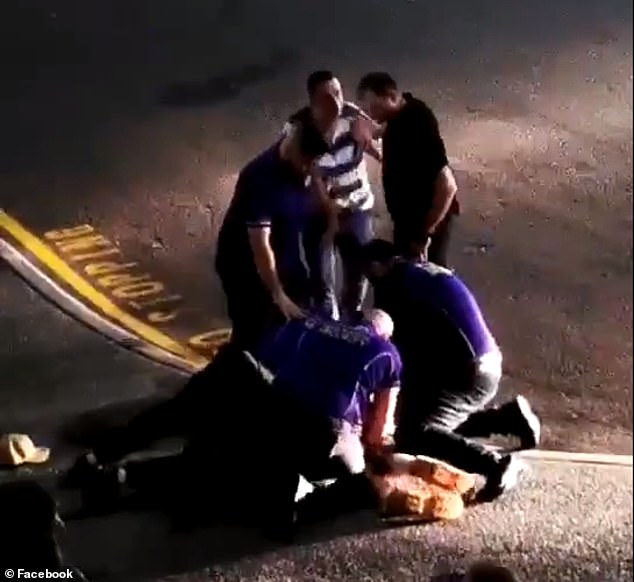 After the man was wrestled to the ground by three bouncers, a worried bystander came up to intervene before walking off again

Daily Mail Australia rang The Landmark on Sunday night to ask for details, but the duty manager said he had been instructed not to make any comments.

Colemans Hospitality Group opened The Landmark Hotel in the Palmerston suburb of Yarrawonga in 2018 after selling the Irish pub Shenannigans on Darwin’s central Mitchell Street, according to The Shout hospitality news website.

It is not known when the fight occurred.

The Landmark is attached to the Gateway Shopping Centre and trades until 3am, seven days a week.

A NT Police spokesman said police are aware of the incident and are making relevant enquiries.

Daily Mail Australia has attempted to contact the security guards.