Wild monkeys that live in large groups near humans are disease ‘superspreaders’ – and the most sociable animals should be VACCINATED , study claims

Wild macaques are ‘superspreaders’ of diseases like coronaviruses and influenza in the animal kingdom, a new study has revealed.

Researchers from Anglia Ruskin University mapped how such diseases spread among wildlife populations.

Their results show that when wild monkeys live in large groups alongside human settlements, they can act as superspreaders.

The researchers hope the findings could help to identify individual monkeys that are the most sociable and tend to congregate around and interact with humans the most.

‘Targeting these with vaccinations or other forms of medical treatment could potentially protect both macaque populations and humans in areas where they live in close proximity,’ the team said in a statement.

Wild macaques are ‘superspreaders’ of diseases like coronaviruses and influenza in the animal kingdom, a new study has revealed (stock image)

Humans have have given wild animals diseases nearly 100 times

It’s widely believed that SARS-CoV-2 was spread from wild animals to humans.

But a new study claims that humans might give viruses to animals more often than previously understood.

Researchers reviewed published evidence of human-to-wildlife transmission events, with a focus on how such events could threaten animal and human health.

They found a total of 97 examples of human-to-wildlife transmissions involving a wide range of pathogens, from M. tuberculosis, measles, influenzas and hepatitis B.

These pathogens likely spread from humans to wild animals in multiple ways, such as wild animals’ contact with human sewage.

In the study, the team used computer models to simulate how infectious diseases spread between monkeys and humans living in urban areas of South and South-East Asia.

‘Population expansion has increased the contact between humans and wildlife, and these human-wildlife interfaces are widely recognised as “hotspots” for the transmission of diseases across a variety of species.’

The researchers focused on the interactions of 10 separate groups of macaques in northern India, Malaysia, and southern India.

Behavioural data was fed into computer models to simulate the impact of outbreaks of human diseases such as influenza, coronaviruses, and measles.

Computer simulations were then run 100,000 times in total across the 10 groups to estimate the vulnerability of the macaque populations to disease outbreaks.

The results revealed that the size of the outbreak was dependent on the centrality of the macaque first infected.

For example, if the first macaque infected was better connected, it would lead to a larger outbreak.

Meanwhile, if the first-infected macaque had great interactions with humans – for example around human-provided foods – the scale of the outbreak was greater. 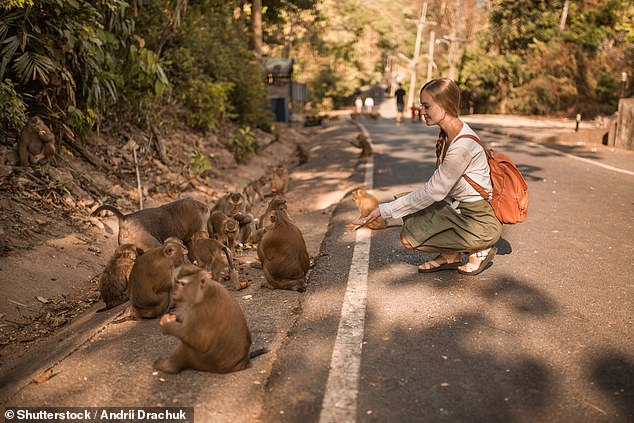 Meanwhile, if the first-infected macaque had great interactions with humans – for example around human-provided foods – the scale of the outbreak was greater (stock image)

‘Being so closely related to humans, macaques are highly vulnerable to the same diseases that infect people,’ Dr Balasubramaniam said.

‘Indeed, previous work by other researchers established that macaques may be infected by human gastrointestinal and respiratory pathogens.

‘Here we showed how respiratory pathogens in particular might spread through macaque populations, and specifically how their behaviour might influence such spreading.’

Based on the findings, the researchers suggest that well-connected macaques could be vaccinated in the future to prevent disease outbreaks.

‘As well as being “superspreaders” within their species, these individuals with the most human contact also pose the highest risk for interspecies disease transmission events, either from humans into wildlife, or vice-versa,’ Dr Balasubramaniam concluded.

‘These would be the most effective targets for disease control strategies such as vaccination or antimicrobial treatment.’

A pair of studies on the coronavirus outbreak published in February 2022 claim that the pandemic did indeed result from live animals sold at a Chinese wet market in Wuhan.

The studies challenge an alternative theory that the virus leaked from labs at the nearby Wuhan Institute of Virology.

The co-author of both studies is Michael Worobey, an evolutionary biologist at the University of Arizona, who says the evidence is clear.

‘When you look at all of the evidence together, it’s an extraordinarily clear picture that the pandemic started at the Huanan market,’ Worobey told the New York Times.

Worobey had previously signed a letter demanding more research into what’s known as the ‘lab leak theory’ and is known by colleagues for having a ‘soft spot for wild theories.’

However, some prominent scientists do believe in the ‘lab leak theory – including Harvard scientist Dr Alina Chan.

In December 2021, Dr Chan told UK MPs that the Wuhan lab leak is the most likely origin of the coronavirus pandemic and that Beijing officials tried to cover it up.

It’s possible we will never be able to conclusively establish the true origin of Covid.