A wildlife fanatic’s recording of blue tits has seen him become a viral sensation, after his latest clip racked up more than 41million hits across the world.

John Chadwick, 43, of Loughborough, admits the ensuing popularity of his now viral clip is ‘a little bit bonkers’.

Initially, he started livestreaming footage of the birds inside the nesting box to his family so they could watch the chicks’ progress before flying the nest.

But after uploading a timelapse video to YouTube, John was stunned to see his video was watched tens of millions of times by viewers from all corners of the globe.

John said: ‘It’s gone a little bit bonkers. I only wanted to show my neighbours, friends, nieces and nephews what the birds were up to.

‘I had no idea the films would attract such interest.

‘To think that literally tens of millions of people have been avidly watching the birds from around the world is just incredible and quite overwhelming.’

John Chadwick, 43 of Loughborough, started livestreaming the blue tits (above) and quickly racked up 41 million views on YouTube

In the three-minute clip uploaded to YouTube, viewers can see three weeks of progress pass in the blink of an eye.

On Day 1, the beautiful birds help their newly hatched chicks emerge, and on Day 5 the hatchlings are fed a tasty breakfast consisting of caterpillar.

After almost two weeks, the chicks are larger but still demand regular feeding from their parents within the safety of their nest.

An unwelcome intruder tries to break into the nesting box on Day 20, and just a day later, the chicks are ready to leave home.

Sound engineer John, who has toured with Aerosmith and Ringo Starr, bought the bird box on a whim during lockdown.

He installed it on a willow tree in the back garden of his Leicestershire home in March and within hours the pair of blue tits moved in, before hatching five chicks.

John’s videos are mostly watched by people in America and India with UK audiences accounting for just five per cent of his total views. 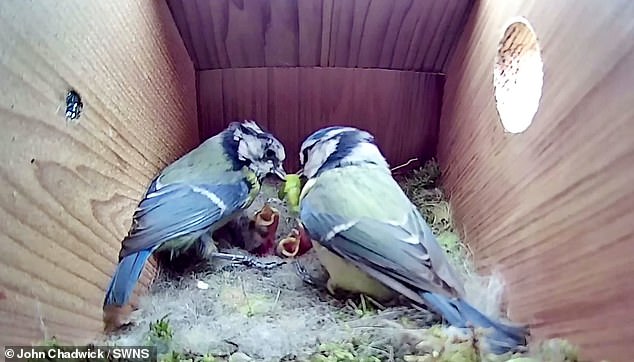 And despite the huge global success of the films, John is unlikely to make enough for a nest egg of his own.

He said: ‘My personal challenge to myself was to cross the threshold to get monetised and then recoup what the £150 I paid for the camera and £90 for the hard drive – it is due any day.

‘It is not an insignificant amount of money but not a fortune either.’

The stars of John’s videos, the newly hatched chicks, have since successfully flown the nest, but stay in the area and enjoy his bird feeder.

John hopes a new family of birds moves in so he can replicate his bird box videos next spring.