Colorado wildlife officials euthanized a sow bear early on Saturday morning after the animal was believed to have attacked a local woman and then chased another in a residential neighborhood.

Colorado Parks and Wildlife officers said they tracked down the bear near Manitou Springs, which lies about 80 miles south of Denver.

‘We believe this is the sow that aggressively attacked one woman in Manitou Springs and then chased another on Thursday night,’ said Cody Wigner, Assistant Area Wildlife Manager for the Colorado Springs region.

The wildlife officers caught the bear near the scene of the attack using trained hounds, according to KDVR-TV.

They then put it down in what was described as ‘humane’ euthanasia.

The sow’s two cubs were found and taken to a rehabilitation center where they will be trained to avoid human contact.

The cubs are expected to be released into the wilderness next winter.

‘This is why we say “garbage kills bears” and urge everyone to secure their trash cans,’ Wigner said.

‘This is bear country. We need to keep them wild and not let them become trash bears.’

Bears that rummage through trash and eat human food lose their natural fear of people and can become more aggressive in future encounters.

Wildlife officials said a woman who lives in Manitou Springs was ‘very lucky’ to have only suffered minor injuries on Thursday night when she was attacked by a bear.

According to CPW, the sow and her two cubs charged the woman, knocked her down, and clawed her back.

The woman suffered three scratches on her back, but was not seriously injured. She did not need to be treated at a hospital. 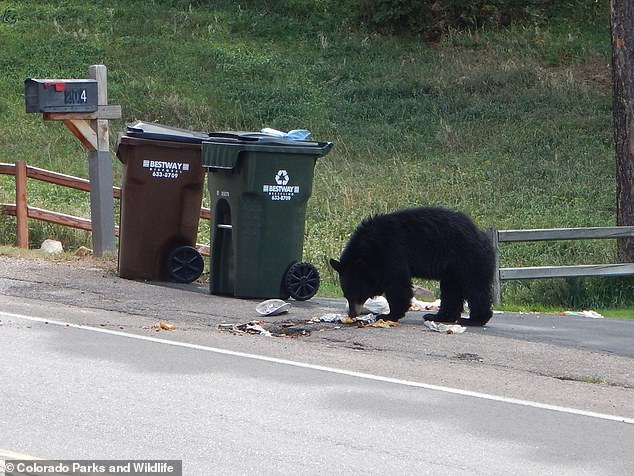 Colorado wildlife officials are urging residents to secure their trash so that bears do not come to rely on humans for food and lose their natural fear of people, leading to more aggressive behavior. The above image is a file photo of a sow in Colorado. It is not the sow bear that was euthanized in Manitou Springs on Friday

A few minutes after the attack, a bear chased another person on the same block.

Local police alerted CPW about the attack on Friday morning.

This is the second time in recent days that a bear suspected to have attacked a Colorado resident was put down.

In Aspen, CPW officers euthanized a bear that attacked a 54-year-old man inside his home on Friday morning, causing lacerations to his head and neck.

The man was rushed to a local hospital, where he underwent surgery. His injuries were not considered life-threatening.

CPW used dogs to track down the bear shortly after the attack.