Will China be the next to obtain unstoppable nukes?

China has announced it is building the world’s fastest wind tunnel to develop a new generation of super-fast airplanes – but it could also be used for hypersonic missile technology.

The development of what it said would be ‘the world’s fastest hypersonic wind tunnel’ was revealed by the state-run Xinhua news agency late on Monday.

Wind tunnels test how air will pass over a solid object, helping designers improve aerodynamics or reduce stress points for objects as they reach high speeds.

‘The 265-meter-long tunnel can be used to test hypersonic aircraft that can travel at speeds of up to Mach 25 (30,625 kph), 25 times the speed of sound,’ Han Guilai, a researcher with China’s State Key Laboratory of High Temperature Gas Dynamics at the Chinese Academy of Sciences, said.

To compare, the current fastest generation of fighter jets can travel up to speeds of around 2.5 Mach.

China has announced it is building the world’s fastest wind tunnel that could be used to test hypersonic missiles. Pictured, footage of a test of Russia’s new Sarmat missile

The revelation comes as the world’s leading military nations embark on a race to develop the next generation of hypersonic weapons, from missiles and spy planes to railguns, that can beat conventional defence systems.

Earlier this month, Russia’s president Vladimir Putin boasted his nation had developed a new generation of ‘invincible’ hypersonic missiles, sparking anger in the United States and other NATO countries.

He said the creation of the new weapons has rendered Nato’s US-led missile defence ‘useless’, and means an effective end to what he described as Western efforts to curb Russia’s development. 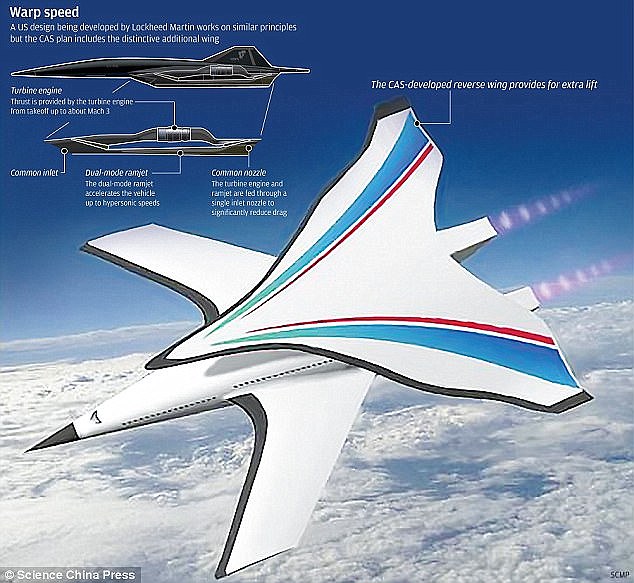 The development of what China said would be ‘the world’s fastest hypersonic wind tunnel’ was revealed by the state-run Xinhua news agency late on Monday. Pictured, plans for a ‘hypersonic heavy bomber’ that were unveiled by Chinese researchers recently

He said: ‘I want to tell all those who have fuelled the arms race over the last 15 years, sought to win unilateral advantages over Russia, introduced unlawful sanctions aimed to contain our country’s development: all that you wanted to impede with your policies has already happened.

‘You have failed to contain Russia.’

He said that the nuclear-powered cruise missile tested last autumn has an unlimited range as well as high speed and manoeuvrability, allowing it to pierce any missile defence.

The Russian leader said the high-speed underwater drone also has an ‘intercontinental’ range and is capable of carrying a nuclear warhead that could target both aircraft carriers and coastal facilities.

He said its operational depth and high speed would make it invulnerable to enemy interception.

‘No-one in the world has anything like that,’ he said. ‘It may appear someday, but by that time we will develop something new.’ 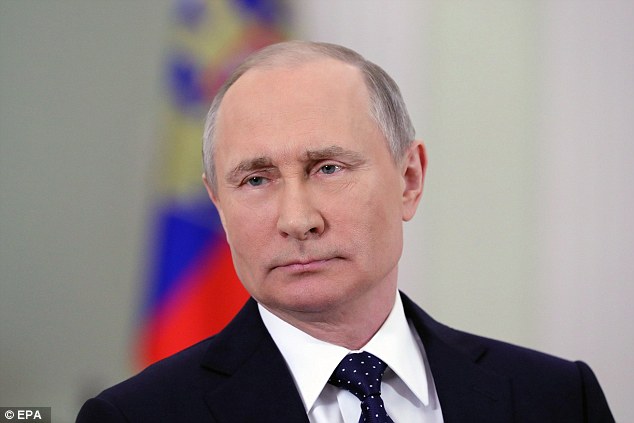 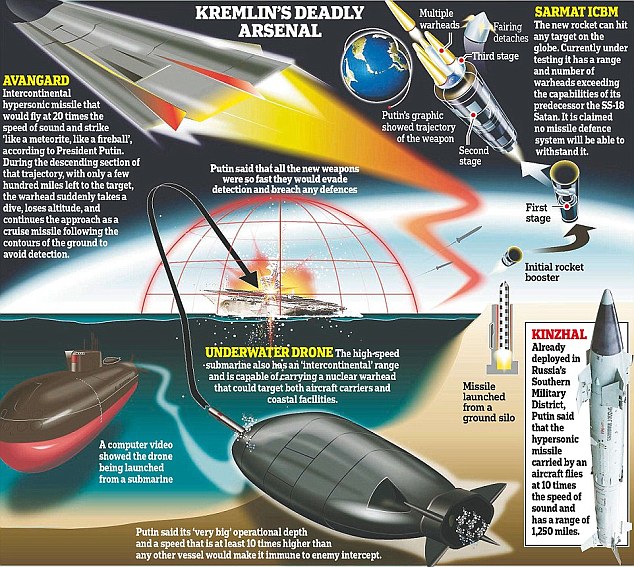 The Russian leader said that another new weapon, called Avangard, is an intercontinental hypersonic missile that could fly to targets at a speed 20 times the speed of sound and strike ‘like a meteorite, like a fireball’.

Putin said Russia has also tested a new heavy intercontinental ballistic missile, called Sarmat, with a range and number of warheads exceeding its Soviet-era predecessor, known in the West as Satan.

While experts are deeply sceptical about how close to operational the missiles might actually be, US officials in recent weeks have sounded growing alarm about the potential threat from hypersonic weapons – defined as weapons that can travel at five times the speed of sound or more.

Such weapons can beat regular anti-missile defences as they are designed to switch direction in flight and do not follow a predictable arc like conventional missiles, making them much harder to track and intercept.

WHAT ARE HYPERSONIC AIRCRAFT AND WHO IS DEVELOPING THEM?

Hypersonic aircraft are those capable of a hitting speeds five times the speed of sound or more.

The vehicles could be used to deliver missiles, including nuclear weapons, to targets around the world in a fraction of the time achieved by current craft.

Hypersonic vehicles travel so rapidly and unpredictably they could provide an almost-immediate threat to nations across the globe.

Once developed, the gap between identifying a military threat and launching an attack on it will drop from hours to minutes, even at long distances.

Since 2013, China has conducted seven successful test flights of its hypersonic glider DF-ZF.

The vehicle will be capable of speeds of between Mach 5 and Mach 10, or five to 10 times the speed of sound.

US officials tested tested HTV-2 in 2011, an unmanned aircraft capable of Mach 20, but the hypersonic flight lasted just a few minutes before the vehicle crashed.

According to reports in the Japan-based Diplomat magazine, China has also developed – and last year tested – a new type of hypersonic missile called the DF-17.

Though the Pentagon is warning about hypersonics, the United States has itself been developing the technology for years.

The Xinhua report said the Chinese Academy of Sciences had already simulated a hypersonic plane flight in its current wind tunnel at speeds ‘ranging from Mach 5 and 9’.

‘The new tunnel will aid the engineering application of hypersonic technology by duplicating the environment of extreme hypersonic flights,’ Han said.

‘Once issues are discovered during these ground tests, they will be ironed out before test flights begin.’