The actor became the latest celebrity to announce that he is leaving the social media site in the wake of the Cambrdige Analytica user data scandal.

Ferrell took to his account on Tuesday to give warning to his fans that he would be deleting it in 72 hours, saying that he could no longer use the platform ‘in good conscience’.

Actor Will Ferrell (pictured, January 2018) became the latest celebrity to announce that he was deleting his Facebook account in the wake of the Cambrdige Analytica user data scandal 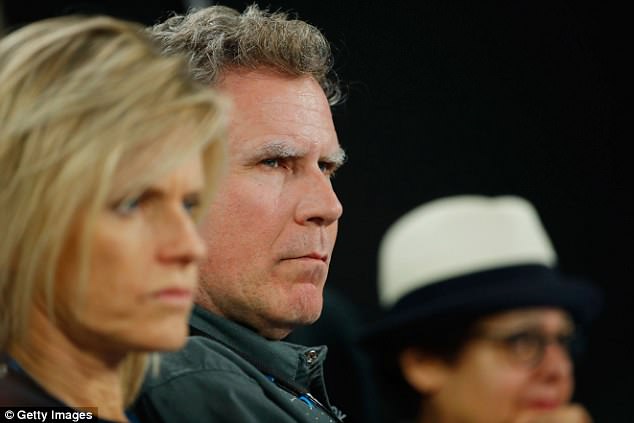 Ferrell (pictured, January 2018) warned his fans on Tuesday that he would be deleting his account in 72 hours and that he couldn’t ‘in good conscience use the services of a company that allowed the spread of propaganda’ 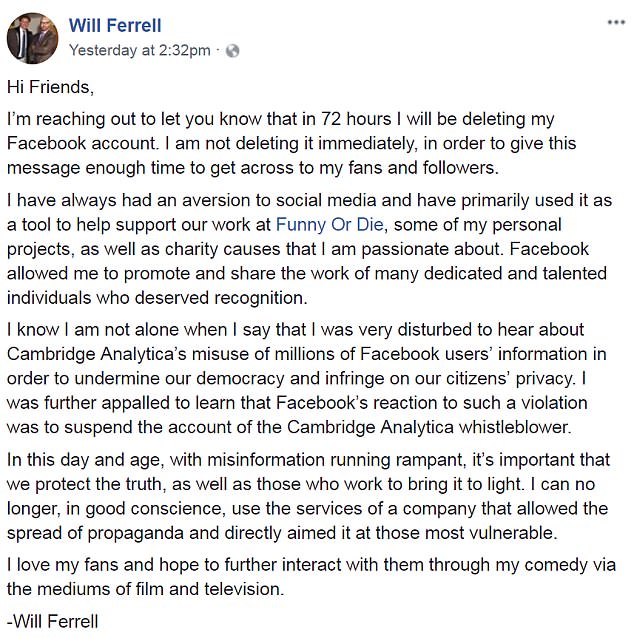 It comes in the wake of news that Cambridge Analytica, a data firm with ties to President Donald Trump’s 2016 election campaign, allegedly accessed data from approximately 50 million Facebook users without their knowledge

‘I know I am not alone when I say that I was very disturbed to hear about Cambridge Analytica’s misuse of millions of Facebook users’ information in order to undermine our democracy and infringe on our citizens’ privacy,’ he wrote.

I was further appalled to learn that Facebook’s reaction to such a violation was to suspend the account of the Cambridge Analytica whistleblower.

‘In this day and age, with misinformation running rampant, it’s important that we protect the truth, as well as those who work to bring it to light. I can no longer, in good conscience, use the services of a company that allowed the spread of propaganda and directly aimed it at those most vulnerable.’

It was revealed by The New York Times and The Guardian that Cambridge Analytica, a data firm with ties to President Donald Trump’s 2016 election campaign, allegedly accessed data from approximately 50 million Facebook users without their knowledge.

Brian Acton, the co-founder of WhatApp, popularized the hashtag #DeleteFacebook in response to last week’s reports on the data breach.

On the same day, singer Cher also deleted her account. She wrote on Twitter that it had been ‘very hard’ for her because Facebook had helped her with her charity. 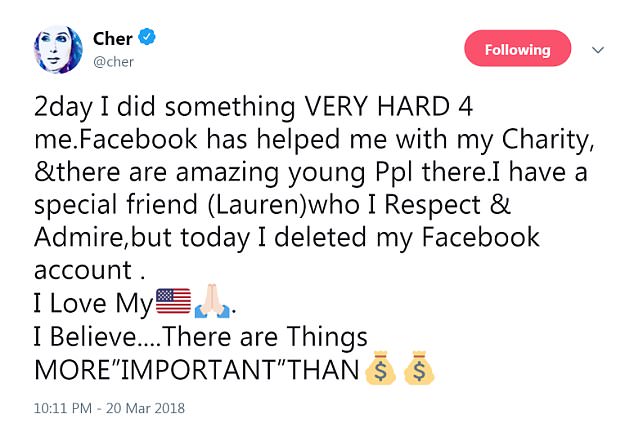 Several other celebrities also announced that they were deleting their Facebook accounts in the wake of the scandal, including WhatsApp co-founder Brian Acton, Cher and Elon Musk

As of Friday afternoon, the Facebook pages for Tesla and SpaceX were also no longer online.

Founder Elon Musk later tweeted: ‘It’s not a political statement and I didn’t do this because someone dared me to do it. Just don’t like Facebook. Gives me the willies. Sorry.’

And in a surprise twist, Playboy announced on Wednesday that it too would be quitting Facebook.

In a statement, the company said: ‘There are more than 25 million fans who engage with Playboy via our various Facebook pages, and we do not want to be complicit in exposing them to the reported practices.’

The announcement of several celebrities and companies deleting their accounts is the latest in a set of blows for Facebook. On Tuesday, shares dropped 4.9 percent at $152.22 and is down nearly 15 percent for the month.

The social media giant closed at its lowest point since July 2017. Fears on Wall Street were not eased upon Tuesday’s news that CEO Mark Zuckerberg has decided to testify before Congress.