England’s bowlers finally broke through on the third morning of the first Test, including a maiden wicket for Will Jacks – but not before Pakistan’s openers each added to the game’s burgeoning tally of hundreds.

At lunch, after Jack Leach removed Azhar Ali in the first over with the second new ball, Pakistan were 298 for three, still trailing by 359. If nothing else, England had prised open a door that had threatened to slam shut.

Before that, with the Rawalpindi pitch steadfastly refusing to change character from the surface that had yielded 838 runs over the first two days, Abdullah Shafique and Imam-ul-Haq extended their partnership from its overnight 181 to 225 – Pakistan’s highest for the first wicket against England. 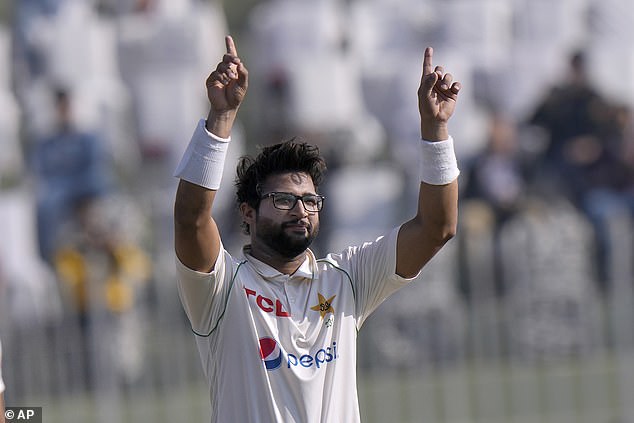 For the first time in Test history, both teams had enjoyed double-century opening stands in their first innings – a comment, more than anything, on the pitch.

If Ben Stokes’s bowlers might reasonably have been wondering where a wicket was going to come from, the answer was provided by Jacks. Twelve mainly harmless overs on the second day had brought none for 50, and his fifth ball of the morning – short and wide – promised little.

Instead, Shafique – on 114 – contrived to edge a cut, which was well held by Ollie Pope behind the stumps, and England were on the board.

Moments after drinks, they doubled their tally, as Imam lofted Jack Leach towards long-on, where Ollie Robinson backpedalled and clung on: 245 for two, with Imam out for 121 – the game’s sixth hundred, and all inside seven sessions. 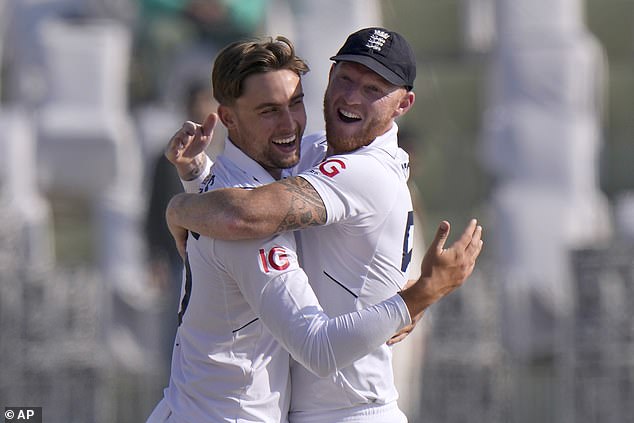 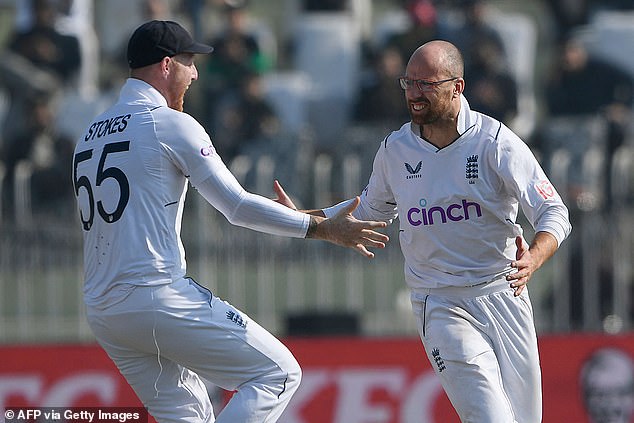 For a slowly growing crowd, this wasn’t necessarily bad news, and cheers immediately went up for the arrival of Babar Azam, Pakistan’s captain and batting glamour boy. From his fifth ball, he forced Leach off the back foot between midwicket and mid-on. Babar was up and running.

A morning that had begun 15 minutes early in an attempt to make up for overs lost to bad light had until now been spin-dominated. But, after Joe Root rubbed the ball on Leach’s bald forehead in search of sweat and therefore reverse-swing, Stokes brought on Robinson and, soon after, Jimmy Anderson.

Anderson looked especially threatening, and might have had Azhar caught at leg slip on 17 by Zak Crawley, only for the ball to burst through his fingers as he dived low to his left.

With Anderson finally finding a smidgen of reverse, it seemed unclear why Stokes would take the new ball only 10 minutes before lunch. Stokes clearly knew better.

Leach got its fifth delivery to straighten and, after what felt like an age, umpire Ahsan Raza agreed with his appeal. Azhar’s inevitable appeal produced only three reds: the ball had straightened a fraction on pitching, and England were cock-a-hoop.