Will Republicans dump Trump after his endorsed candidates lose

Donald Trump is under fire from Republicans who blame their poorer than expected showing in the midterm elections on the controversial former president.

The GOP kingmaker endorsed around 300 candidates, held 30 rallies and raised millions of dollars, hoping to demonstrate his continued MAGA influence that could spark another bid for the White House.

IS IT TIME TO DUMP TRUMP?

But there are questions about his Midas touch after a number of his preferred candidates failed to win seats, including the shock defeat of Dr Oz.

His constant teasing of whether he will or won’t run in 2024 may have put off swing voters, as the midterms effectively turned into a referendum on his politics.

Other Trump backed stars such as JD Vance secured victory and more results are incoming, including the nailbiter in Georgia between MAGA supporter Herschel Walker and Raphael Warnock.

As of 6.30am ET, of the five Trump backed Governor candidates who have had results declared, three had lost, with four more results to come.

The former president lost four of the six House candidates he endorsed, and one out of the six senators.

‘They weren’t good candidates. They had more allegiance to him than anything else. The GOP might still win both [chambers] but this is not the night they expected.’ 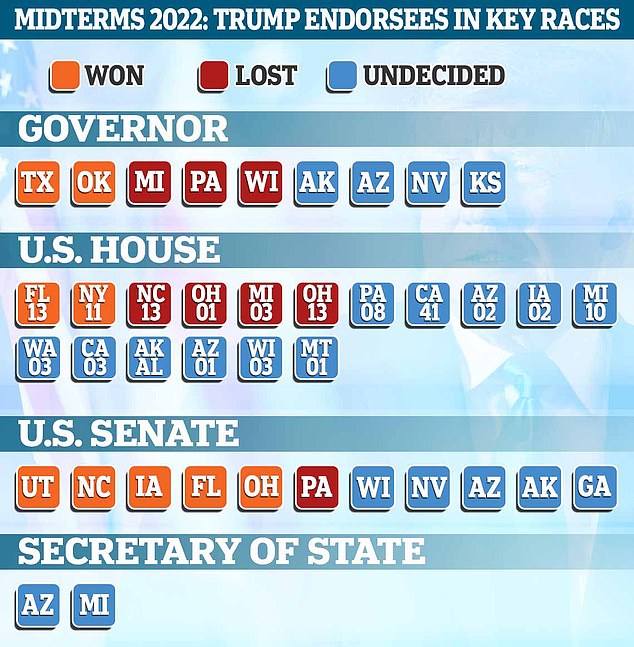 As of 6.30am ET, eight Trump backed candidates had lost including one senate race, four house candidates and three governors 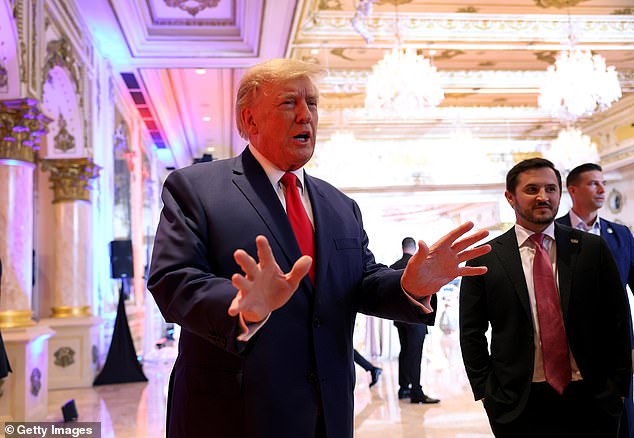 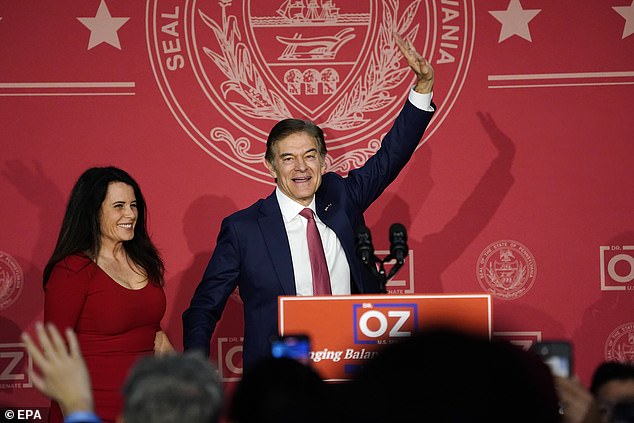 Dr Oz, who had been endorsed by Trump during the primary, lost to Democrat John Fetterman in the Pennsylvania Senate race 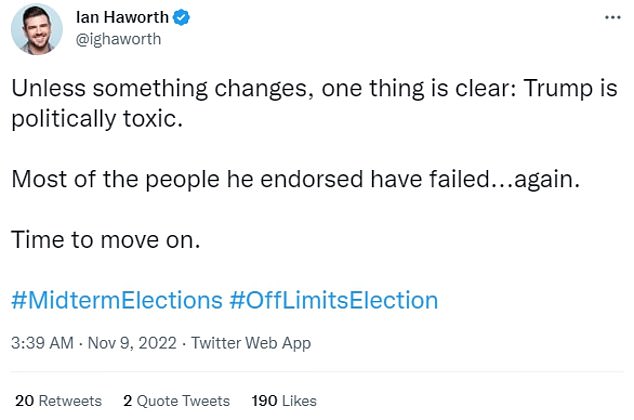 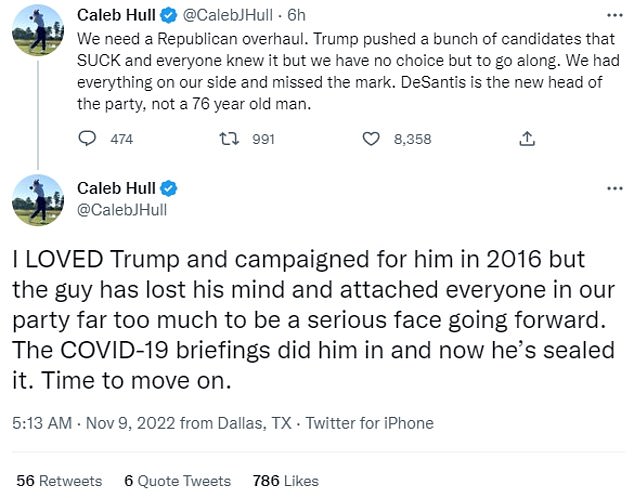 Bill Palatucci, a member of the Republican National Committee from New Jersey, said: ‘Trump candidates were a drag on the party and the messaging of all our candidates.

‘We were constantly having to distance ourselves from their support of the former president.’

After summoning reporters and his most loyal supporters to a watch party at his Mar-a-Lago club, he ended the night without a triumphant speech.

Nonetheless, he took to his social media platform to insist he’d had ‘A GREAT EVENING.’

In the biggest shock of the night, Dr Oz, who had been endorsed by Trump during the primary, lost to Democrat John Fetterman in the Pennsylvania Senate race.

Fetterman had faced questions about his fitness for office after suffering a stroke just days before the state’s primary, but nonetheless bested TV’s Dr Oz in a major rebuke to Trump. 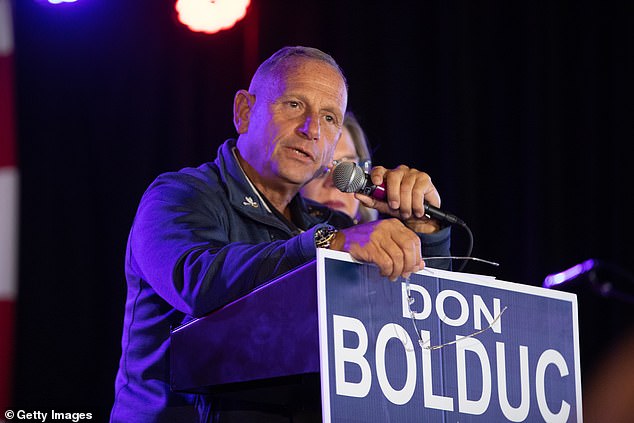 ‘We launched this campaign almost two years ago – and we had our slogan – and it’s on every one of those signs right now: every county, every vote,’ Fetterman said to a rowdy crowd still gathered at Stage AE in Pittsburgh. ‘And that’s exactly what happened – we jammed them up. We held the line.’

‘I never expected that we would turn these red counties blue, but we did what we needed to do,’ he continued. ‘And that’s why tonight I’ll be the next U.S. senator from Pennsylvania,’ Fetterman added.

Fetterman had faced questions about his fitness for office after suffering a stroke just days before the state’s primary, but he nonetheless bested Republican Dr Mehmet Oz in a major rebuke to Trump, whose endorsement helped Oz win his competitive primary.

Former NFL star Herschel Walker, who was heavily backed by Trump, is in a too-close-to-call race in Georgia and could face a run-off.

It wasn’t all gloom for Trump, as he helped lift Republican Senate candidates to victory in Ohio and North Carolina.

While campaigning for Vance on Monday, Trump teased an announcement for his presidential run.

‘We want nothing to detract from the importance of tomorrow. You understand that,’ Trump said at a rally.

‘I’m going to be making a very big announcement on Tuesday, November 15,’ he added, saying the announcement would come at his Mar-a-Lago property in Florida.

He said: ‘When someone says they don’t want to detract, get ready for some detracting.

‘Trump is all about Trump and after months of being on the sidelines – good months for Republicans – Trump had to make it all about him. Again.’

Another Republican strategist said that the results are already ‘baked into the cake’ and the former president throwing his name into the mix will have little effect.

‘I think the cake is baked on the 2022 election and the specter of a Trump candidacy probably has little to no effect at the outcome. Had he announced his candidacy in advance of the election it might have been a different story,’ said strategist Ken Spain. 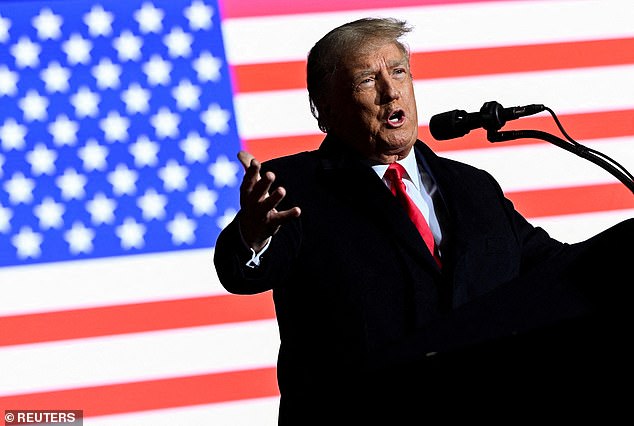 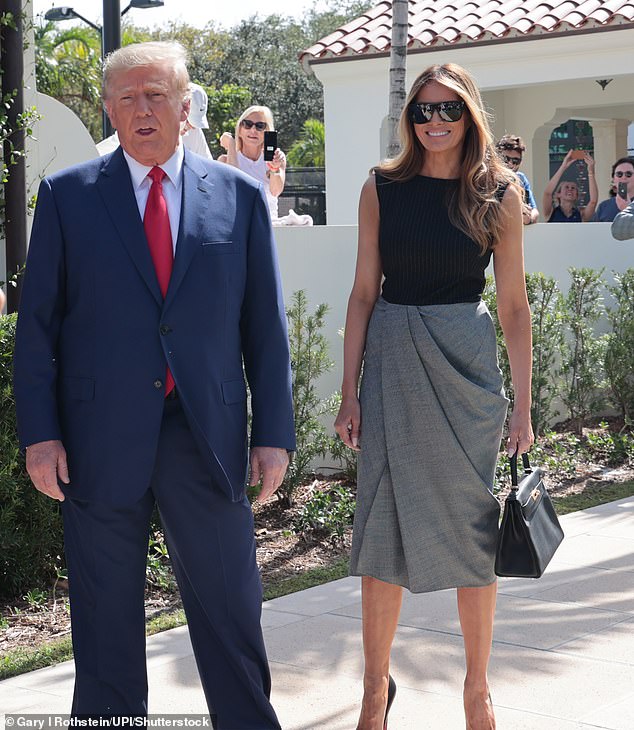 Democratic incumbent Raphael Warnock holds less than a one point lead over Republican ex-NFL star Herschel Walker in the key Senate race that will likely head to a runoff election in December that could decide which party takes the majority.

With 97 percent of precincts reporting, Warnock was up by about 31,000 votes, leading Walker 49.4 to 48.6, on a night that Democrats across the country defied the odds and a GOP red wave failed to materialize.

If neither candidate breaches the 50 percent threshold, the race heads to a December 6 runoff, per Georgia’s election law.

A third-party Libertarian will likely prevent either candidate from cinching a majority.

The path is reminiscent of 2020 for Warnock, when he was forced into a runoff with then-incumbent GOP Sen. Kelly Loeffler and came out on top.

Strategist Jim Dornan told DailyMail.com Trump announcing on Monday could have been a ‘real problem’ for Republicans.

‘Thank goodness he held off from announcing anything last night. That could have been a real problem in many of these close races,’ he said. ‘Regarding next week, I think an announcement this quickly after the midterms may indicate some concern on his part that he’s losing his grip on the party and frankly, he’d be probably right about that.’

‘I don’t think however it changes the landscape significantly as far as who gets into the primary or not,’ Dornan added. He noted that potential contenders like Florida Gov. Ron DeSantis is term-limited out of office in 2027, Virginia Gov. Glenn Youngkin in 2026.

‘So would [DeSantis] forgo 2024 and look to 2028 when he would have been out of office for two years? Would Youngkin wait for 3? Trump’s numbers aren’t as strong as they were, so I think the fear factor among other would be candidates is dissipating a bit,’ Dornan said.

In the midterms, many Republicans who backed his failed efforts to overturn the 2020 election lost key races to oversee elections in some competitive states.

Mastraiano was seen outside the Capitol on the day of the January 6 insurrection and regularly communicated with Trump as the then-president tried to reverse his loss to Joe Biden.

The state’s governor appoints the secretary of state, who is the top voting official.

In Minnesota, Republican Kim Crockett, who echoed some of Trump’s lies about voting, lost her bid for secretary of state, which in most states is the position that oversees state elections.

In Michigan, Democratic Secretary of State Jocelyn Benson declared victory over Kristina Karamo, a community college instructor who became one of the most prominent election conspiracists in the country.

And in New Mexico, Republican Audrey Trujillo, who cheered on Trump’s effort to reverse the voters’ will in 2020, lost to Democratic Secretary of State Maggie Toulouse Oliver. 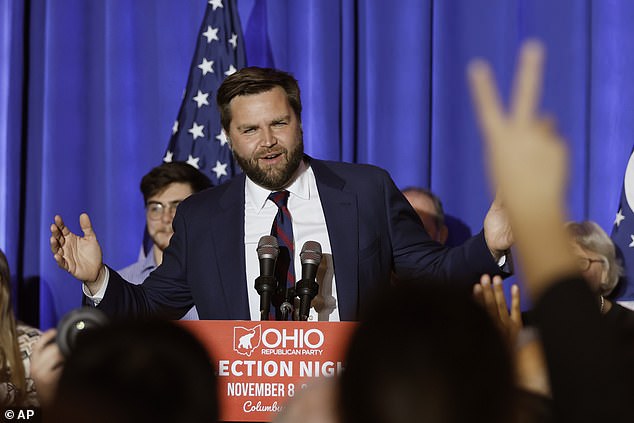 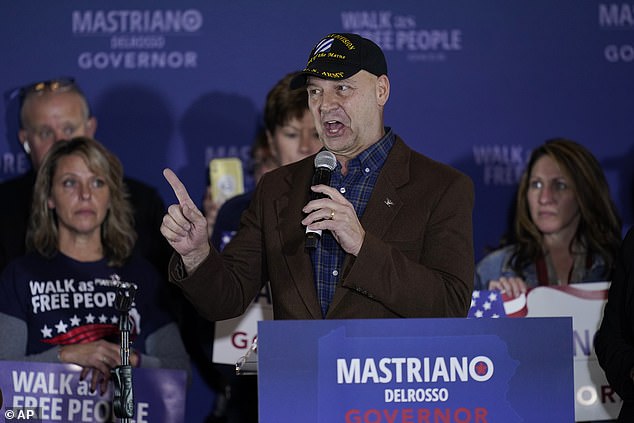 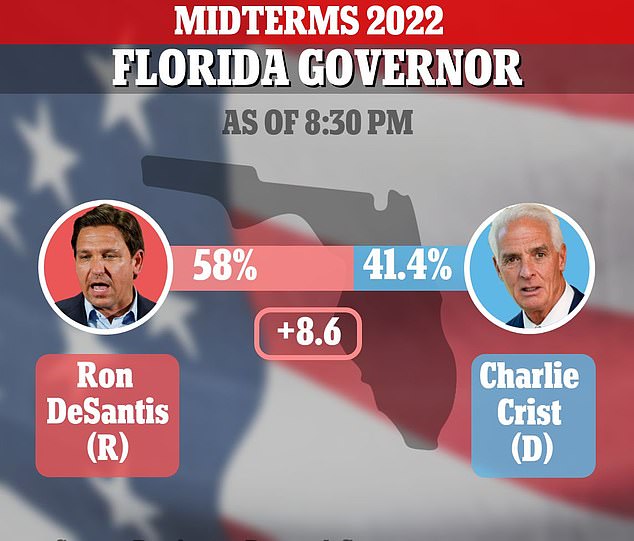 New York Democratic governor Kathy Hochul managed to turn back a challenge from Republican Lee Zeldin to cling to the governor’s mansion in what had become a competitive race in a Blue-leaning state.

The race tightened in the polls in recent weeks as Zeldin, a U.S. Republican House representative, hammered Hochul on crime and other issues while getting a Donald Trump endorsement and fundraising support from the former president.

NBC called the race for Hochul, and she tweeted she was ‘deeply honored’ to have been elected.  She was leading 55-45 with nearly two thirds of the vote in Tuesday night.

Zeldin refused to concede, telling supporters his position would improve as more votes come in from Long Island.

Races in Arizona and Nevada, major swing states where election conspiracists were competing for secretary of state positions, remained too early to call.

But many democracy advocates and Democrats were cheered by the initial tallies in political battlegrounds.

‘Ultimately, some voters likely chose candidates in part because they were committed to telling the truth and protecting election integrity,’ said Ben LaBolt, a Democratic strategist.

Still, in Republican-leaning states, some election conspiracists did win secretary of state offices.

All told, half of the 22 Republicans vying to be secretaries of states – and overseeing elections in most states – have repeated Trump’s election lies. Seven endorsed his attempts to overturn the will of the people and remain in power.

Voting finished at 7pm and such was the margin of victory – at least 17 points – that the Associated Press called the race in a little more than an hour.

By the early hours of Wednesday morning he had a 19.4-point lead with 99 percent of the votes counted, wrapping up a landslide.

Having secured a second term, 44-year-old DeSantis has cemented his position as a star of the Republican Party and a possible 2024 candidate.

In his victory speech, he described the battles he fought in first term as COVID-19 shut down the country and culture wars erupted. 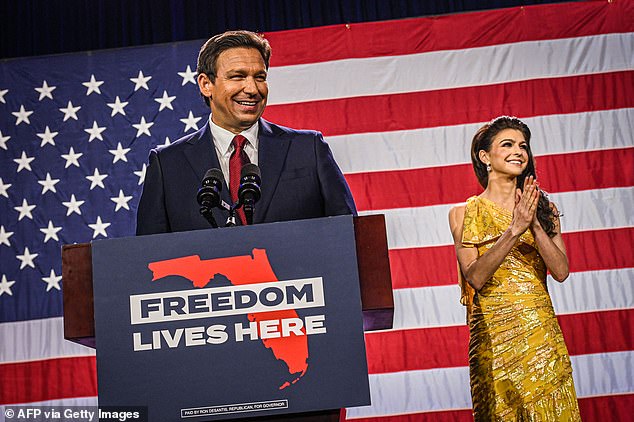 ‘We saw freedom and our very way of life in so many other jurisdictions in this country wither on the vine. Florida held the line,’ he said to cheers.

‘We chose facts over fear; we chose education over indoctrination.’

An ardent Trump loyalist is facing a nail-biting race to keep her seat in the House as it has become increasingly clear her Democratic opponent made unexpected gains.

A Donald Trump loyalist, Boebert has established herself as as a national lightning rod in her first term.

She has slammed President Biden’s approach to inflation, crime, dependency on foreign oil and border policy.

Those were the arguments that powered him on to the national stage. And the scale and nature of his win – racking up votes in the former Democratic stronghold of Miami-Dade – will excite supporters with one eye on the White House.

The 44-year-old frequently tops polls of who Republicans would like to run for the White House in 2024 – if former President Donald Trump sits it out.

For his part, Trump sees the danger and has been firing shots across the governor’s bows.

At a rally in Pennsylvania on Saturday, Trump unveiled a new nickname for him: ‘Ron DeSanctimonious.’

And on Monday he issued a veiled threat.

He went on hint he was ready to go on the attack with personal details.

‘But if he did run I could tell you things bout him that won’t be very flattering. I know more about him other than perhaps his wife – who’s really running about his campaign.

The Senate is still on a knife-edge, with all eyes on the results in Georgia, Arizona, Nevada and Wisconsin to determine who will take the majority.

Republicans are still favored to retake the House, but it will likely be by a slim margin.

In Alaska, with three candidates on the ballot, two Republicans – Kelly Tshibaka and Sen. Lisa Murkowski – were dueling for the most votes.

House Minority Leader Kevin McCarthy declared in a speech that Republicans would take the House, but networks had yet to call control of the chamber early Wednesday.