Will Smith tumultuous relationship with his wife, Jada Pinkett Smith, apparently caused trouble for the actor at the Academy Awards on Sunday.

Smith hit Oscars presenter Chris Rock in a stunning meltdown on stage at Sunday’s ceremony after the comedian cracked jokes about Jada’s haircut.

After Smith strode out on stage and appeared to smack Rock with an open right hand, Rock staggered and exclaimed ‘wow, Will Smith just smacked the s**t out of me.’

Smith, visibly emotional, walked back to his seat in the audience and shouted: ‘Keep my wife’s name out of your f***ing mouth.’

The meltdown appeared genuine but it was not immediately clear whether it had been staged as an ill-conceived prank.

After the incident, Smith and Jada reportedly held hands throughout the ceremony.

The couple’s open relationship has seemingly been a trigger for Smith, having sparked chaotic conversation at various star-studded events and caused the actor to insist ‘never been infidelity’ in their marriage.

Will Smith tumultuous relationship with his wife, Jada Pinkett Smith, apparently caused trouble for the actor at the Academy Awards on Sunday 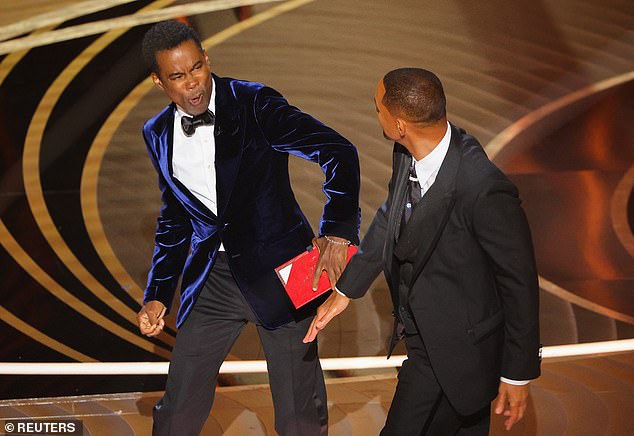 Most recently, the couple found themselves the butt of a joke earlier this month after Smith scooped Best Actor for his role in King Richard at the 75th Annual British Academy Film Awards.

BAFTAs host Rebel Wilson, 41, quipped on stage: ‘I thought his best performance over the past year was being OK with all his wife’s boyfriends!’

Speaking afterwards, Smith insisted that there has ‘never been infidelity’, despite Jada, 50, admitting in 2020 that she had an ‘entanglement’ with singer August Alsina, 29.

‘There’s never been infidelity in our marriage. Jada and I talk about everything, and we have never surprised one another with anything ever,’ Smith said.

The actor – who has son Jaden, 23, and daughter Willow, 21, with Jada – added that he doesn’t care if people speculate about his marriage and instead he encourages the ‘chatter’ in the hope it will spark meaningful debate.

‘I have decided that chatter about my life can be of a benefit to people,’ he told Gayle King on CBS Sunday Morning after the BAFTAs.

‘Chatter is the first stage to having a real conversation and to be able to truly explore if some of the things in your heart are loving or poisonous.’ 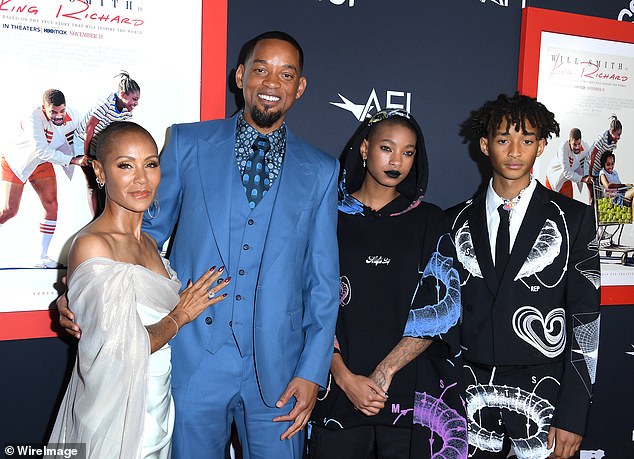 The couple – who share two children, Willow and Jaden Smith – have found their marriage the topic of headlines in recent years, particularly when Jada discussed her relationship with singer August Alsina (not pictured). The Smith family is seen together in November 2021 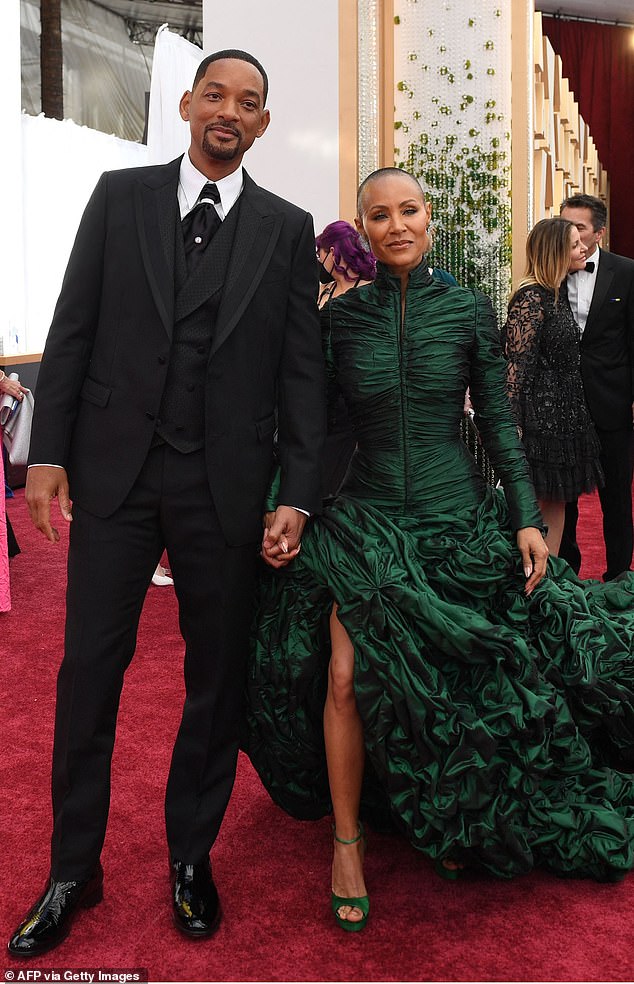 Smith, pictured with Jada at the Oscars on Sunday, admitted in September 2021 his wife wasn’t ‘the only one engaging in other sexual relationships’ outside of their marriage

The Smiths also got into a bit of an awkward situation on the 2022 SAG Awards red carpet in February.

The A-list couple was being interviewed by E! News host Laverne Cox who suddenly brought up the topic of entanglements, saying: ‘We can’t wait for more Red Table Talk and more entanglements.’

Jada smoothly navigated the uncomfortable situation, raising her fingers and saying, ‘No more of those!’ while smiling.

The couple’s marriage has hit the headlines in recent years, particularly when Jada discussed her relationship with Alsina.

Jada first made waves with the word ‘entanglement’ in 2020 on her Red Table Talk Facebook show, while describing her relationship with Alsina to her husband.

She did the show a month after August appeared on The Breakfast Club in June and claimed that he was in a relationship with the actress and had her husband’s ‘blessing.’

‘Four and a half years ago… I started a friendship with August. We actually became really, really good friends,’ Jada told Red Table.

‘It all started with him just needing some help, me wanting to help his health, his mental state.

‘From there as time went on, I got into a different kind of entanglement with August,’ she explained, later clarifying, ‘It was a relationship, absolutely.’

She added: ‘I was in a lot of pain, and I was very broken. Now in the process of that relationship, I definitely realized that you can’t find happiness outside of yourself.’

In September 2021, the Aladdin star admitted his wife wasn’t ‘the only one engaging in other sexual relationships’ outside of their marriage.

However, he declined to go into detail, particularly because his mindset has changed in recent years.

He explained: ‘It may seem hard to believe, but I would lose sleep over not giving you the answer that I know you could use.

‘But by the same token, I don’t want to deal with the backlash of that in the world. To say I don’t want to talk about that three years ago would have been f****** excruciating for me.’

Will admitted the 50-year-old actress never ‘believed in conventional marriage’ so they spent a long time figuring out their relationship boundaries.

He said: ‘Jada never believed in conventional marriage.… Jada had family members that had an unconventional relationship.

‘So she grew up in a way that was very different than how I grew up. There were significant endless discussions about, what is relational perfection? What is the perfect way to interact as a couple? And for the large part of our relationship, monogamy was what we chose, not thinking of monogamy as the only relational perfection.’

But the Men in Black star admitted their approach is not for everyone.

He said: ‘We have given each other trust and freedom, with the belief that everybody has to find their own way. And marriage for us can’t be a prison.