Now, they’re waiting to see whether President Donald Trump will block the release of files that could shed light on a tragedy that has stirred conspiracy theories for decades.

The National Archives has until October 26 to disclose the remaining files related to Kennedy’s 1963 assassination, unless Trump intervenes.

The CIA and FBI, whose records make up the bulk of the batch, won’t say whether they’ve appealed to the Republican president to keep them under wraps.

‘The American public deserves to know the facts, or at least they deserve to know what the government has kept hidden from them for all these years,’ said Larry Sabato, director of the University of Virginia Center for Politics.

‘It’s long past the time to be forthcoming with this information,’ he said.

It’s unlikely the documents contain any big revelations about Kennedy’s killing, said Judge John Tunheim, who was chairman of the independent agency in the 1990s that made public many assassination records and decided how long others could remain secret. 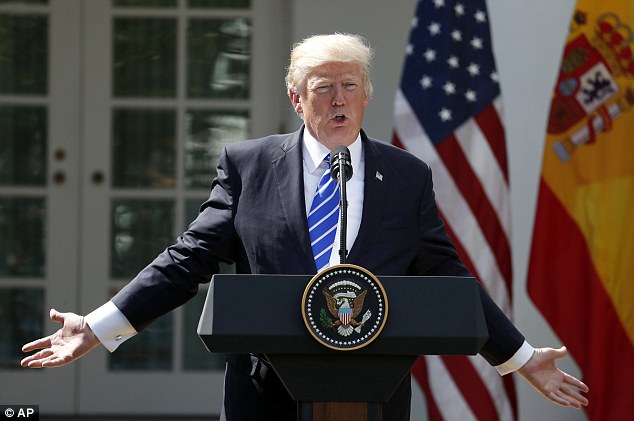 Now, they’re waiting to see whether President Donald Trump will block the release of files that could shed light on a tragedy that has stirred conspiracy theories for decades

Sabato and other JFK scholars believe the trove of files may provide insight into assassin Lee Harvey Oswald’s trip to Mexico City weeks before the killing, during which he visited the Soviet and Cuban embassies.

Oswald’s stated reason for going was to get visas that would allow him to enter Cuba and the Soviet Union, according to the Warren Commission, the investigative body established by President Lyndon B. Johnson, but much about the trip remains unknown.

Among the protected information up for release are details about the arrangements the U.S. entered into with the Mexican government that allowed it to have close surveillance of those and other embassies, said Tunheim, a federal judge in Minnesota. 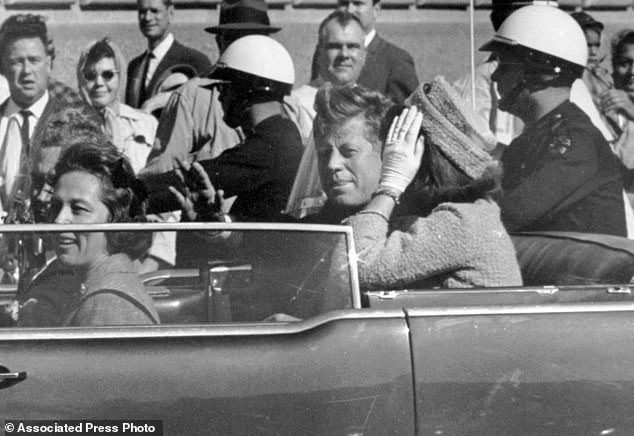 The National Archives has until October 26 to disclose the remaining files related to Kennedy’s 1963 assassination, unless Trump intervenes. In this November 22, 1963 photo, President John F. Kennedy waves from his car in a motorcade approximately one minute before he was shot in Dallas

Kennedy experts also hope to see the full report on Oswald’s trip to Mexico City from staffers of the House committee that investigated the assassination, said Rex Bradford, president of the Mary Ferrell Foundation, which publishes assassination records.

The FBI declined to comment on whether it has asked Trump to keep the files hidden.

A CIA spokeswoman would say only that it ‘continues to engage in the process to determine the appropriate next steps with respect to any previously-unreleased CIA information.’

Congress mandated in 1992 that all assassination documents be released within 25 years, unless the president asserts that doing so would harm intelligence, law enforcement, military operations or foreign relations.

The files that were withheld in full were those the Assassination Records Review Board deemed ‘not believed relevant,’ Tunheim said. 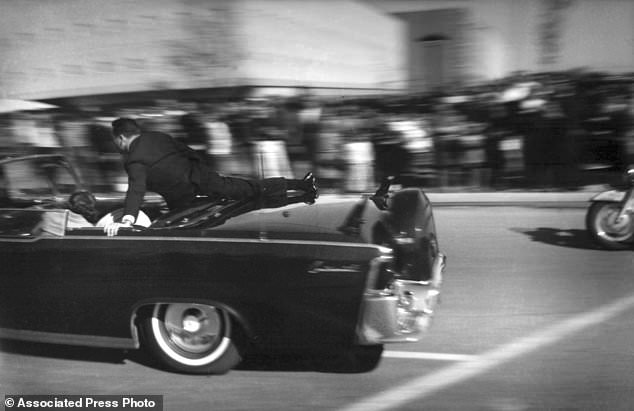 The still-secret documents include more than 3,000 that have never been seen by the public. In this 1963 photo, the limousine carrying mortally wounded President John F. Kennedy races toward the hospital seconds after he was shot in Dallas

Its members sought to ensure they weren’t hiding any information directly related to Kennedy’s assassination, but there may be nuggets of information in the files that they didn’t realize was important two decades ago, he said.

‘There could be some jewels in there because in our level of knowledge in the 1990s is maybe different from today,’ Tunheim said.

The National Archives would not say whether any agencies have appealed the release of the documents.

The Archives in July published online more than 440 never-before-seen assassination documents and thousands of others that had been released previously with redactions.

There could be some jewels in there

Among those documents was a 1975 internal CIA memo that questioned whether Oswald became motivated to kill Kennedy after reading an AP article in a newspaper that quoted Fidel Castro as saying ‘U.S. leaders would be in danger if they helped in any attempt to do away with leaders of Cuba.’

‘Oswald might have had a clear motive, one that we have never really understood for killing Kennedy, because he thought that by killing Kennedy he might be saving the life of Fidel Castro,’ said Philip Shenon, a former New York Times reporter who has written a book about Kennedy’s assassination.

Some of the files will likely remain under wraps, experts say.

It’s unlikely the National Archives will release some IRS records, including the tax returns of Jack Ruby, the man who killed Oswald, Bradford said.

Sabato said he also suspects that some key records may also have been destroyed before the 1992 law ordered that all the files be housed in the National Archives.

And even a full release of the documents isn’t likely to put to rest conspiracy theories that have swirled around the young president’s death for more than five decades.

‘People will probably always believe there must have been a conspiracy,’ Tunheim said. ‘I just don’t think that the federal government, in particular, is efficient enough to hide a secret like that for so long,’ he said.