Will Young thanks Prince William for his LGBT speech

Will Young, the former Pop Idol star, has written a letter to Prince William, the future King of England.

‘I want to let him know what a wonderful thing he did,’ Young says of the Prince’s speech to an LGBT youth charity in June, where William declared that he would ‘fully support’ his children regardless of their sexuality.

‘Him standing up and saying, “I wouldn’t mind if my child was gay” is just incredible,’ the 40-year-old singer enthuses.

‘And William wasn’t forced to say that, it’s his initiative, that’s him. It makes me emotional, in a wonderful loving way. He and Harry have done so much more than they probably will ever realise.’

Will Young, the former Pop Idol star, has written a letter to Prince William, the future King of England. ‘I want to let him know what a wonderful thing he did,’ Young says of the Prince’s speech to an LGBT youth charity in June, where William declared that he would ‘fully support’ his children regardless of their sexuality

Young takes a moment. Despite having met the Princes on several occasions, he is concerned about how he’ll get his letter delivered. Perhaps he could put it in an envelope marked Buckingham Palace, stick a picture of William’s grandmother on it and drop it in a postbox?

‘Of course!’ he laughs. ‘A nice orange stamp should do the trick.’

This is a new Will Young. Positive, can-do, and finally at ease with himself.

Years of therapy and treatment, starting in 2004, have helped ‘rewire’ the troubled entertainer since he was diagnosed with Post Traumatic Stress Disorder in 2012.

‘PTSD is essentially being taken over by past traumas,’ explains Young. He discovered through analysis that he had been temporarily separated from his twin brother at birth, when Rupert was placed in an incubator due to illness, and this had caused Young long-term psychological damage. ‘I had to unlearn what happened, and that’s neurological and it takes a long time. But I’ve done that now,’ he says with relief. ‘It’s a great feeling – like a restart.

‘I have streamlined my life,’ says the singer who by 2012 was estimated to be worth £13.5 million. ‘I’ve got rid of a few classic cars and sold my Poldark-style farmhouse. I don’t need a massive home. I need to know my neighbours and give them all tomato plants.’

Gardening has also been key to Young’s recovery. His recent guest appearance on BBC’s Gardeners’ World prompted presenter Monty Don, who has suffered depression himself, to say: ‘You should never be alone.’

Young used to drink heavily to deal with the pressures of fame. ‘I hardly drink now,’ he says. ‘But I’ll have the odd blowout. The day my new album came out in June we all went to the pub and I got plastered.’

He first experienced the gilded cage of celebrity after winning the inaugural series of Pop Idol in 2002, his high, mellifluous voice garnering 4.6 million out of 8.7 million votes. Young was instantly household-name famous.

‘Fame is not normal,’ he declares. ‘Everyone is pandering to you the whole time. You’re not allowed to grow up. They tried to stop me from living in my own flat after Pop Idol. ‘They said, “We’ll put you up in Chelsea.” I said, “I’ve got a flat.” They used to send cars. I said, “I’ve got a car!” It was quite sinister.’

During Pop Idol’s heats, Young took issue with Simon Cowell over his performance of Light My Fire. Cowell claimed it was ‘distinctly average’. Young calmly disagreed.

‘I think I was amazingly brave,’ says Young now. ‘I took him on and it worked.’

This summer, Young was similarly unyielding when he crossed swords with Piers Morgan. ‘Me and my mother confronted him at the Chelsea Flower Show,’ Young grins. ‘He’d been rude about me because of PTSD. Both my grandfathers had PTSD from the war. I’m very aware of it, I’m from an Army family.

‘My opening question was, “Do you know the definition of trauma?” Of course, he didn’t. I delivered my parting line to his mum, who was actually very nice. I said, “I’m so sorry your son has turned out the way he has, you seem like lovely people.” Then my mother and I sashayed away.

‘Happy people do not say nasty things,’ he stresses. ‘Only unhappy ones do. The Dalai Lama isn’t going around slagging off people.’ 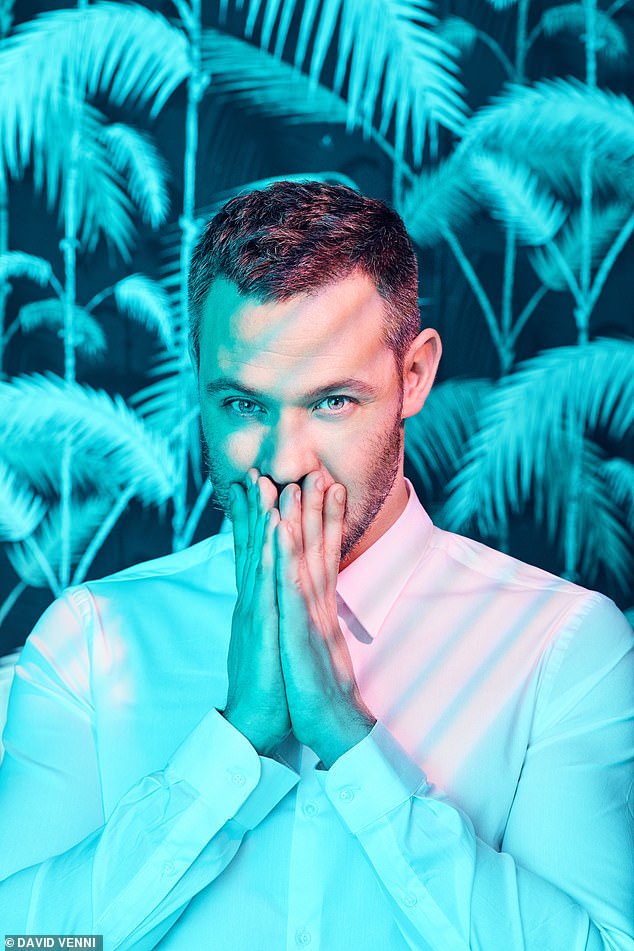 Will Young first experienced the gilded cage of celebrity after winning the inaugural series of Pop Idol in 2002, his high, mellifluous voice garnering 4.6 million out of 8.7 million votes

Young, happy as he is, can still experience unpleasantness in public. He reveals he was ‘homophobically’ attacked in Oxford, where he was receiving treatment, but he wasn’t going to stand for it. ‘I shouted at the top of my voice, “These people are homophobic: they are calling me a ‘fag’ and saying they want to beat me up.” ’ The whole street turned on them. Straight guys wanted to take them on. Women were coming up, mothers with kids. That wouldn’t have happened five years ago.’

Young endured ‘quite a lot of nastiness’ when he walked away from 2016’s Strictly Come Dancing after three weeks. ‘I was just very ill,’ he says. ‘There’s no way I should’ve been doing that show. I tried to back out of it actually. Then got persuaded back by being told, “Will the BBC want to work with you? You’re risking a lot.”

‘So I did it, but with panic attacks the whole time. I would keep going out for a cigarette and think, I don’t really want to be here. Then I thought, I don’t have to be here, so I left.

‘It was so liberating, the best thing I ever did. You’ve only got one life.’

Next year Young makes his literary debut with How To Be A Gay Man, a manifesto-memoir that addresses homosexual ‘shame’, his ‘horrendous’ boarding school and institutional homophobia.

As the new football season warms up, he is confident that we will soon see an openly gay player at top level. ‘It’ll definitely happen,’ Young asserts. ‘It just takes a particular kind of person, someone who can take the heat.’

Which reminds him, he has a letter to pop in the Royal Mail.

Will Young is on tour in October. His new album, ‘Lexicon’, is out now, willyoung.co.uk