We all know William Blake, right? Last week, crowds at the Last Night Of The Proms bawled out the words of Jerusalem to the bombastic tune of Hubert Parry; it’s already the hymn of the Women’s Institutes and the unofficial English anthem.

William Blake was born in London in 1757 and died in 1827. He was a poet, painter and engraver

Many of us can recite at least the first bit of his most celebrated poem, The Tyger: ‘Tyger, Tyger burning bright, In the forests of the night . . .’ His much bleaker poem, London (‘And mark in every face I meet/ Marks of weakness, marks of woe’), is a GCSE set text.

His modern admirers are diverse. As well as people who think of Jerusalem as a theme tune for the Conservative Party, they include Joni Mitchell who wrote a song for his poem The Lamb; Philip Pullman, the children’s author, who credits Blake with some of the inspiration for his anti-God trilogy, His Dark Materials; the Beat poet, Allen Ginsberg, who, after reading Blake’s poem, Ah! Sunflower, told his startled neighbours, teenage girls: ‘I’ve seen God!’; and Labour leader Clement Attlee, who talked of Jerusalem as the vision of the Britain he wanted to build.

He’s interestingly popular among millennials, with internet memes and video games in his name. A new book by John Higgs, the cultural historian, is called William Blake Now: Why He Matters More than Ever. 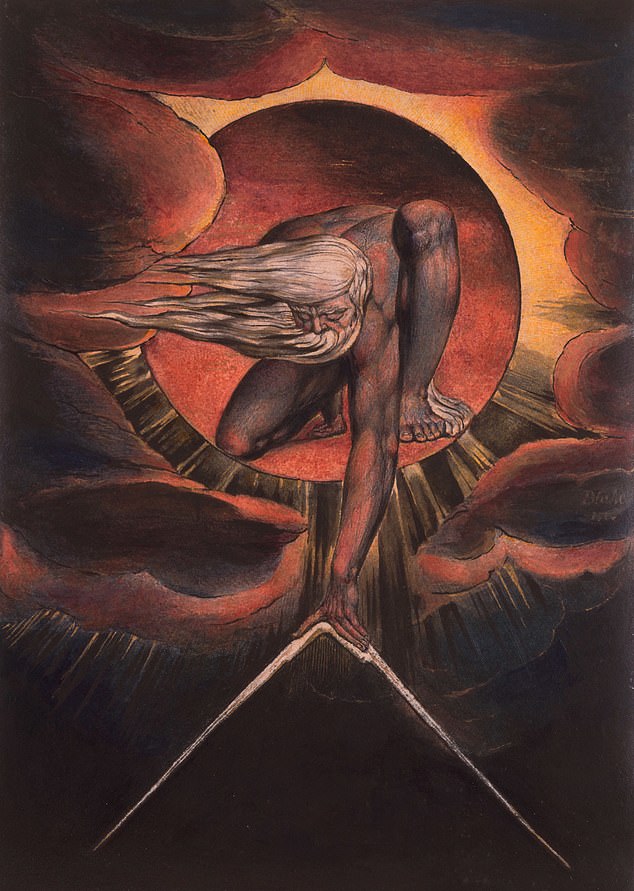 The Ancient of Days by William Blake. It was originally published as a frontispiece to the 1794 work – Europe: A Prophecy

The answer he gives is that Blake was the artist of the imagination rather than reason, and in a world in which artificial intelligence and robotics are taking over mechanical, rational work, Blake is a champion of creativity whose time has come.

Blake’s pictures are as familiar as his poetry, perhaps more so. The images of Newton bending in profile over a compass, or the bearded, Godlike figure of The Ancient Of Days measuring the earth — the best work, Blake said, he ever finished, or The Dance Of Albion, a joyfully naked youth (representing the birth of Britain) flinging his arms out, are instantly recognisable.

Now a huge exhibition of his work — more than 300 images — has opened at Tate Britain in London. It has all the best- loved works — visitors may be surprised to see that the illustrated page of The Tyger is actually tiny — and any number of lesser known ones. 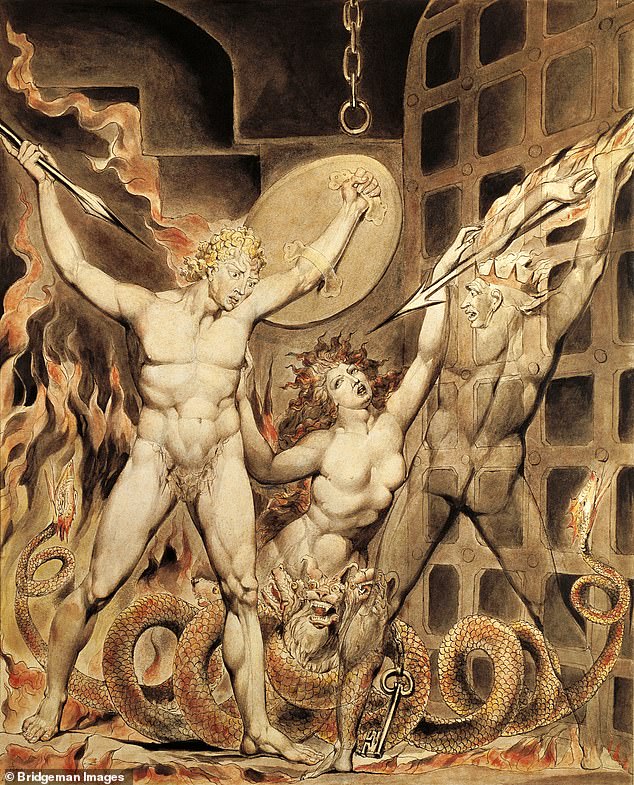 Satan, Sin and Death: Satan Comes to the Gates of Hell, 1807 using pen, ink and watercolour. Satan (left), Sin is depicted at half-serpent (centre) and Death is her half-transparent son (right)

There’s a recreation of his one and only exhibition during his lifetime, held in his father’s hosiery shop in Soho, which was a complete failure.

There’s a mock-up of some pictures on the huge scale he envisioned them, as enormous altarpieces on the subject of The Spiritual Form Of Nelson Guiding Leviathan and The Spiritual Form Of Pitt Guiding Behemoth — yes, you read that right — projected onto the walls of St James’s Church, Piccadilly, where he was baptised.

The exhibition does make clear that Blake had a perfectly respectable and conventional art education, including at the Royal Academy — he was anything but a self-taught genius.

But it also hints at the sheer weirdness of Blake. He was indeed a genius, an utterly individual artist. But even for the time, he was very, very odd. He even looked a little odd, having a big head and broad shoulders on rather a little frame.

It’s well known, for instance, that he was an enthusiastic naturist, on religious grounds. 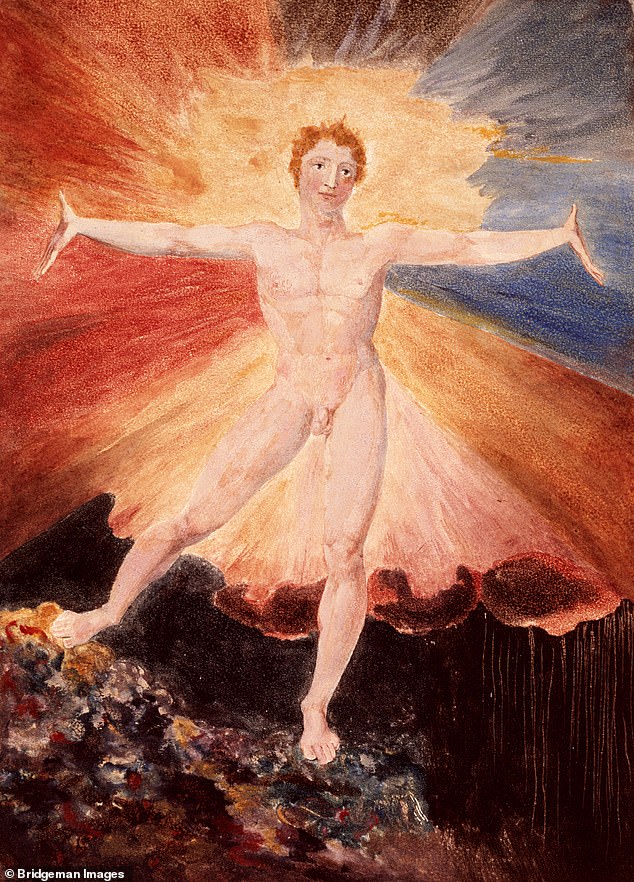 The Dance of Albion, circa 1795, by Blake. Albion is England, personified, and represents awakening

His first biographer, Alexander Gilchrist, describes how his benefactor Thomas Butts called on the Blakes at their home in Lambeth and found them freed from ‘those trouble-some disguises’ — i.e. naked. ‘Come in!’ cried Blake. ‘It’s only Adam and Eve, you know.’

He met his wife, Catherine, on the rebound from a crush on a girl who refused to take him seriously. At a friend’s house, he shared his misery with a dark haired, dark-eyed girl, who told him that ‘she pitied him from her heart’.

Eagerly, Blake asked: ‘Do you pity me?’

‘Yes, I do, most sincerely,’ she said. And Blake said, ‘Then I love you for that’, and promptly began courting her.

They married when he was 25, she 20. The bride was illiterate and marked the marriage register with a cross.

His father, unimpressed by the family background of his new wife, refused to let the couple live with him.

Yet Catherine is the heroine of any biography of Blake, putting up with his weird ideas, his frequent bouts of penury, his imperiousness and his consciousness of his own genius — with which she entirely agreed — and his libido.

Blake was completely obsessed by sex; it was central to his world view. This would be far more apparent from his art, if it weren’t that his wife went through his work after his death, weeding out explicit pieces she thought would discredit his reputation.

The Swedenborgian church, of which he was a member, was founded by a Swedish visionary, Swedenborg, who, among other things, believed that sex was a way of achieving an ecstatic union with God, an idea familiar to us from the Buddhist notion of tantric sex. 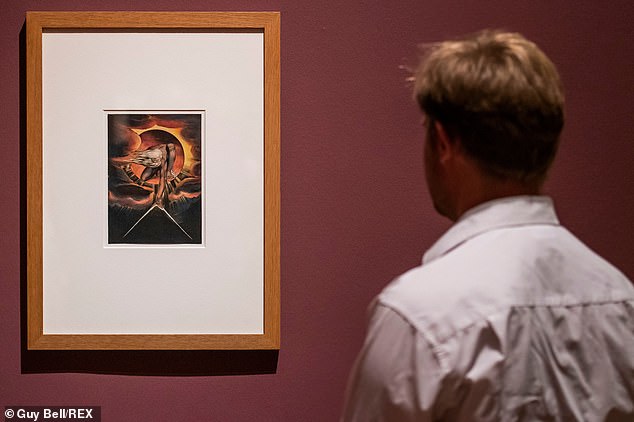 And Blake believed in the Swedenborgian equivalent of tantric sex, and lost no opportunity of engaging in it.

Indeed, according to a biography by Marsha Schuchard, Swedenborg’s view, expressed in his book on conjugal love, is that the wife had the responsibility for maintaining the husband’s ardour.

Blake was so insistent on pursuing spiritual ecstasy through sex, he even contemplated taking on concubines and suggested in this case the wife would generously observe them having sex, ‘bliss on bliss’. In fact, he remained monogamous all his life, and devoted to Catherine.

According to Schuchard, this idea of religiously inspired sexual relations also came from Blake’s mother, another Catherine. She, like Swedenborg himself, had been a member of the Moravian Protestant sect, some of whose members tried to recreate the condition of Adam and Eve before the Fall by engaging in ecstatic sex.

Undoubtedly, Blake was one of the early proponents of what came to be known as Free Love, alongside radical friend Mary Wollstonecraft, mother of Mary Shelley, the author of Frankenstein.

Catherine was a remarkable woman. She learned quite quickly to read and write. As the Tate exhibition points out, she was a collaborator in Blake’s artistic output, hand colouring his prints — though sometimes her work would be too highly coloured.

Usefully, she also had the patience of a saint. On one occasion during her early married life, when she quarrelled with Blake’s beloved brother, Robert, Blake told her: ‘Kneel down and beg Robert’s pardon directly, or you never see my face again!’

As Gilchrist wrote in his biography, ‘being a duteous, devoted wife, though by nature nowise tame or dull’, she reluctantly did kneel down and beg Robert’s pardon, saying: “I am in the wrong”. Robert thundered back: “Young woman, you lie! I am in the wrong!” ’

Home life at the Blakes can never have been dull. But it comes as no surprise to learn that Mrs Blake lost her looks after just a few years of marriage: no one, a contemporary observed, was ever so much changed.

Blake himself was never lonely, for he was forever seeing visions of angels. The famous portrait of him in the Tate exhibition has a slightly startled expression, due, it seems, to the fact that Blake had just been in conversation with the Archangel Gabriel. He started his angelic visions in Peckham Rye when he was a little boy and he saw ‘a tree filled with angels, bright angelic wings bespangling every bough like stars’.

On one occasion, when he was still small, he was late home and explained to his mother that he had seen the prophet Ezekiel sitting under a tree. She smacked him.

Later, when he was apprenticed to an engraver, James Basire, his master sent him to Westminster Abbey to take drawings of the monuments (which may explain his enthusiasm for Gothic art) and he saw Christ and the apostles. 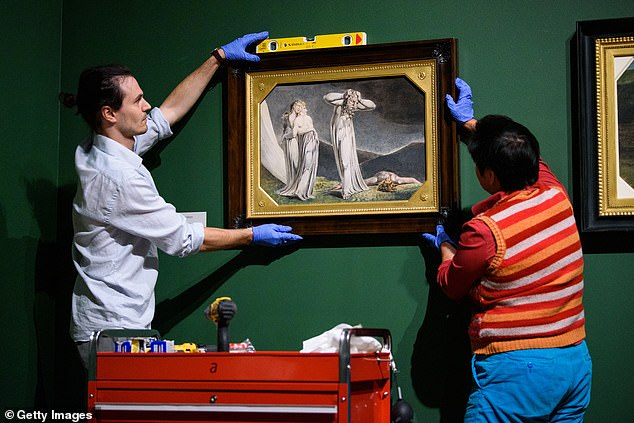 The installation of the final work ‘Naomi Entreating Ruth and Orpah to Return to the Land of Moab’ at the William Blake exhibition at the Tate Britain, Westminster, London 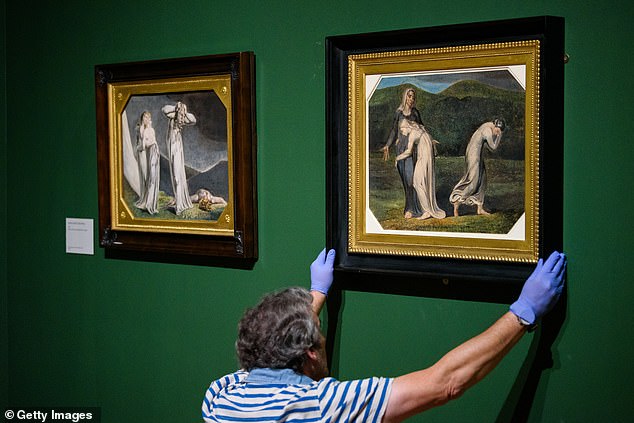 Finishing touches: Installing the final work of ‘Naomi Entreating Ruth and Orpah to Return to the Land of Moab’. Blake turned to the biblical book of Ruth for inspiration

What was remarkable is that he took these visions so much for granted. As GK Chesterton says in his brilliant biography of Blake: ‘He spoke of having met Isaiah or Queen Elizabeth, not so much even as if the fact were indisputable, but rather as if so simple a thing were not worth disputing.

‘Kings and prophets came from heaven or hell to sit to him, and he complained of them quite casually, as if they were rather troublesome professional models. He was angry because King Edward I would blunder in between him and Sir William Wallace. There have been other witnesses to the supernatural even more convincing, but I think there was never any other quite so calm.’

This direct contact with angels may be one reason why he was no respecter of hierarchies — social or artistic. He was often rude to his patrons, which meant he lost several of them. (You could never give him money; you had to buy his work, to save his pride.)

In politics, he was a radical, one of the few admirers of the French Revolution to have the courage to wear the red cockade of the Sans-culottes on his head in public in London. He took it off when the horrors of the Terror became known after 1792.

One of his achievements was to save the life of the influential Republican writer, Tom Paine. He, like Paine, belonged to a circle of radicals, the Friends of Liberty, who met at the house of Joseph Johnson, a radical publisher.

No sooner did he hear from Paine what he’d been saying in his speeches, he bundled him out of the house and sent him to France. It was only just in time; the militia came after him 20 minutes later. 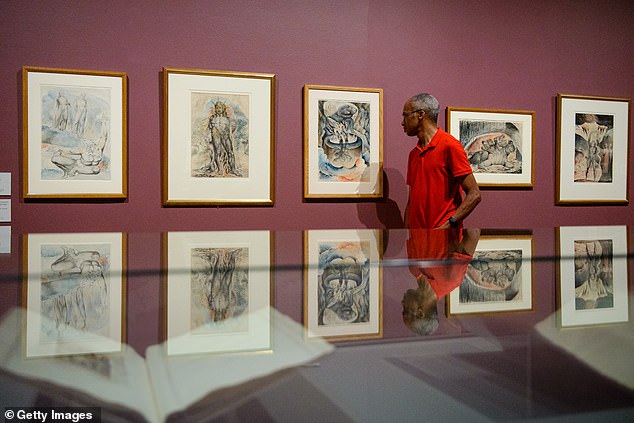 Crucially, Blake was a revolutionary in art, too. He loved clear lines and hated the kind of painting that got in the way of clarity; he would have loathed Impressionism.

He was a fanatic about maintaining a firm line in every piece of art he produced. This was partly from the influence of the sculptor Flaxman, partly perhaps because of his training as an engraver. (Usefully, his brother Robert appeared to him after death to explain a new method of engraving.)

When he met the painter Joshua Reynolds, the great man said to him: ‘Well, Mr Blake, I hear you despise our art of oil painting.’

It’s easy to mock Blake; even his admirers will find material in this new exhibition to confirm how weird, esoteric and eccentric he was.

Yet, of all English artists, he remains the most original.

As Wordsworth put it, Blake was ‘an insane genius’. Insane, maybe. Genius, certainly.

The William Blake exhibition is on at Tate Britain until February 2. To book, visit tate.org.uk