Hugh Grant was every inch the suave star as he and wife Anna Eberstein led the star-studded arrivals of day 11 of the Wimbledon Tennis Championships.

The Bridget Jones star, 58, was suited and booted as he arrived with his gorgeous partner, 40, who oozed sartorial chic in a white shirt and black miniskirt, as they headed into the All England Lawn Tennis and Croquet Club in south-west London on Friday.

Hugh and Anna joined an army of arrivals for day 11 which sees the long-awaited men’s semi finals, which will include a headline clash between Roger Federer and Rafael Nadal. 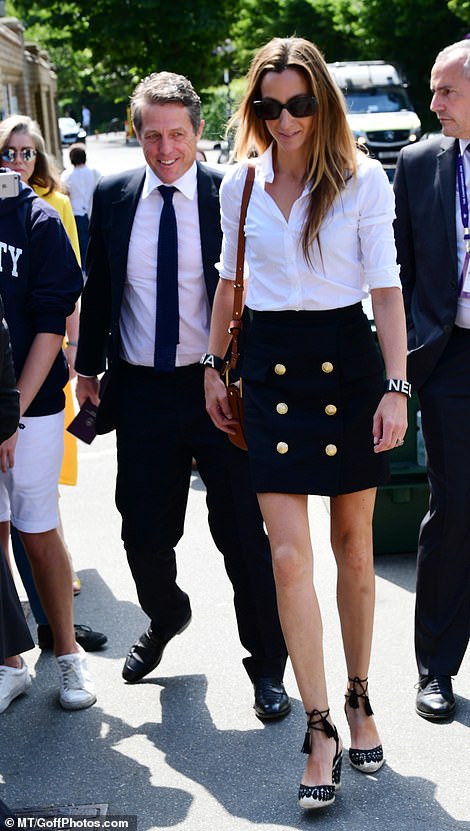 As the couple led the arrivals for another day of action on centre court, Hugh looked dapper in a black suit and navy tie despite the warm climes.

The acclaimed actor was beaming as he proudly arrived alongside wife Anna, who displayed her slender pins in the fitted white shirt and black shirt with gold buttoned detailing.

Hugh married his long-term Swedish girlfriend Anna in a low-key ceremony in Chelsea in May 2018. 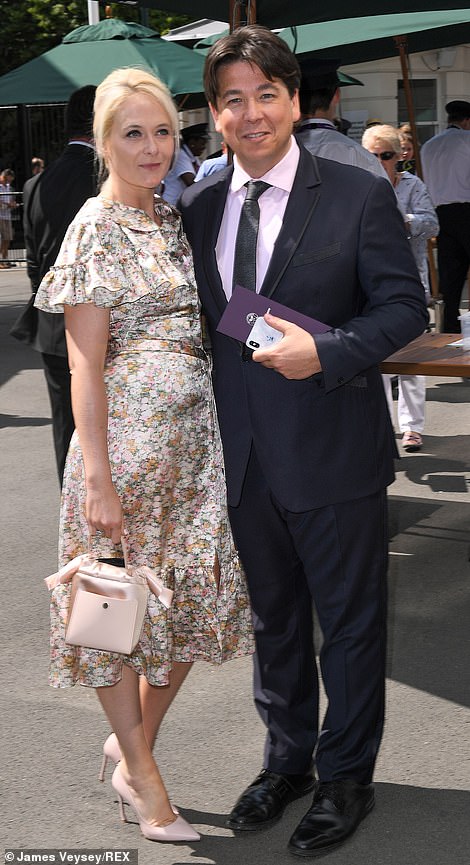 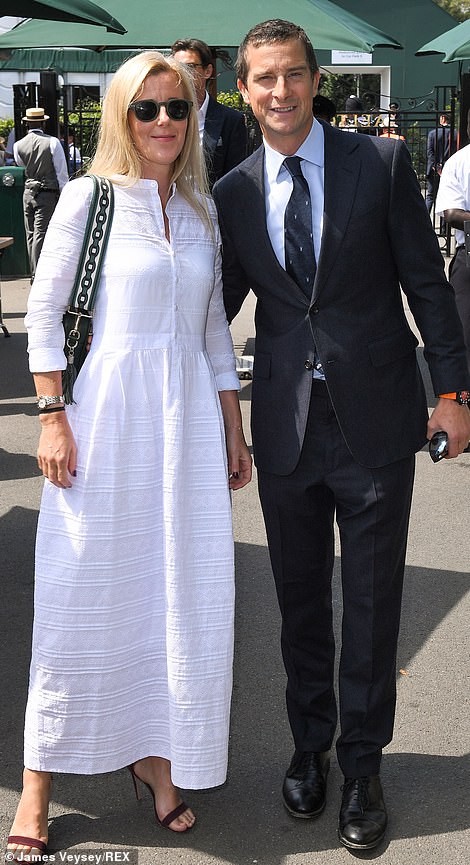 Happy: Comedian Michael McIntyre (left) and presenter Bear Grylls (right) were both beaming as they arrived for the tennis showcase with their respective wives

The couple have been together for seven years, and married for one year, they share three children, John Mungo, who was born in September 2012, and two other children born in 2015  and 2018 – although they have never announced the names.

The Four Weddings and a Funeral star was famous for his own reluctance to marry. He split up in 2000 with his actress girlfriend Elizabeth Hurley after 13 years together.

Hugh could also be set for a surprise reunion with his Bridget Jones co-star Sally Phillips, as she was seen arriving for the tournament sporting a sophisticated navy spotted dress. 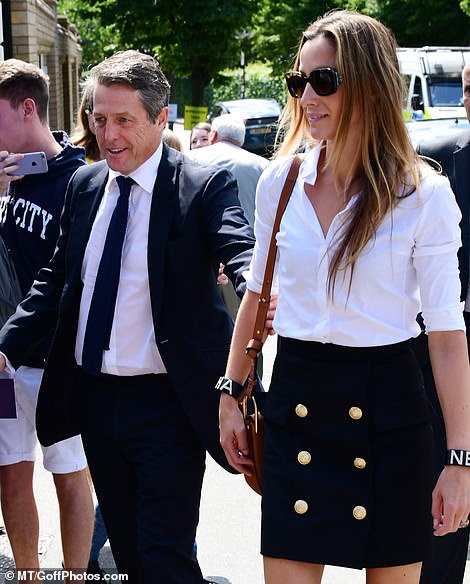 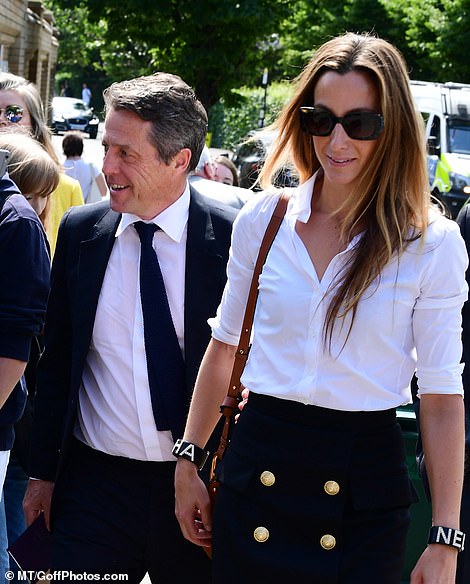 Looking good: Bridget Jones star Hugh cut a dapper figure in a simple black suit as he made a stylish arrival with his stunning wife Anna, who oozed nautical chic in a white shirt and black skirt with gold button detailing

Comedian Michael McIntyre looked equally smart as he made a rare joint appearance with wife of 16 years Kitty.

The north London funnyman, 43, was in good spirits as Kitty cut a chic figure in a silk floral dress with a pretty frilled neckline.

Survival expert Bear was also in attendance for the men’s semifinals day, with Shara perfectly dressed for the summer climes in a loose white midi dress.

Pixie Lott also commanded attention in a plunging white jumpsuit, as she held hands with fiancé Oliver Cheshire on their way into the tennis club. 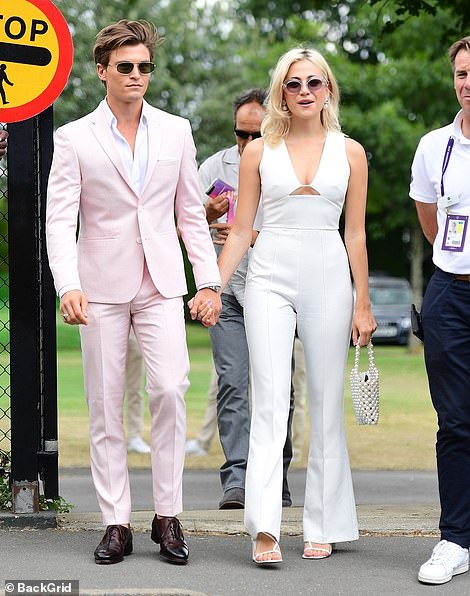 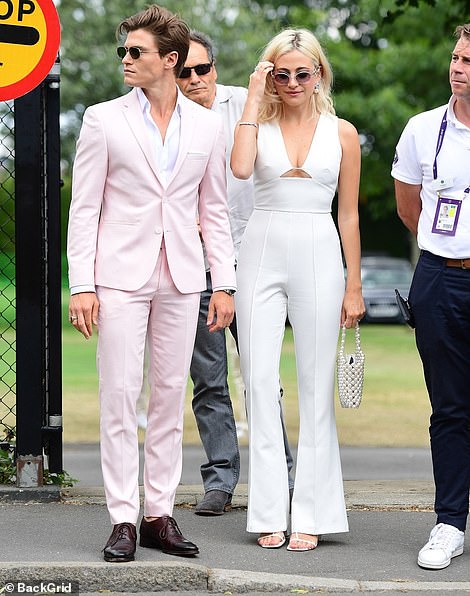 Wow! Pixie Lott was commanding attention in a plunging white jumpsuit and matching strapped heels, as she held hands with fiancé Oliver Cheshire upon arrival 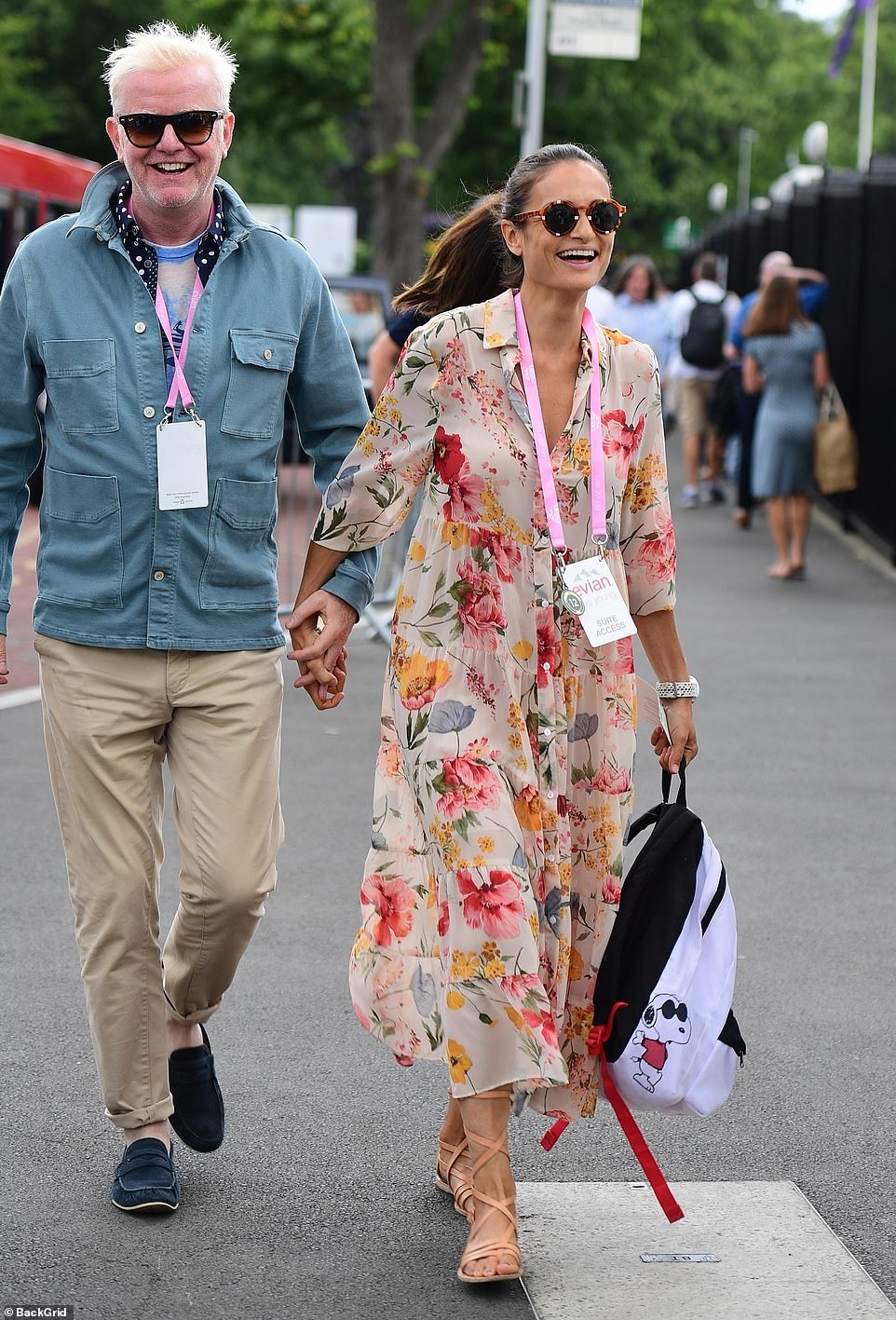 Mr and Mrs: DJ Chris Evans, opted for a more casual ensemble, as he arrived hand-in-hand with pretty wife Natasha, who oozed boho chic in a floral shirt dress

Day 11 at the All England Lawn Tennis and Croquet Club is expected to be full of drama, as tickets for Nadal and Federer’s historic clash were sold for up to £13,000 each.

It comes as the pair – who have 10 Wimbledon titles between them – prepare to face each other at Wimbledon for the first time since their epic 2008 final which has been described as the greatest at SW19 in history. 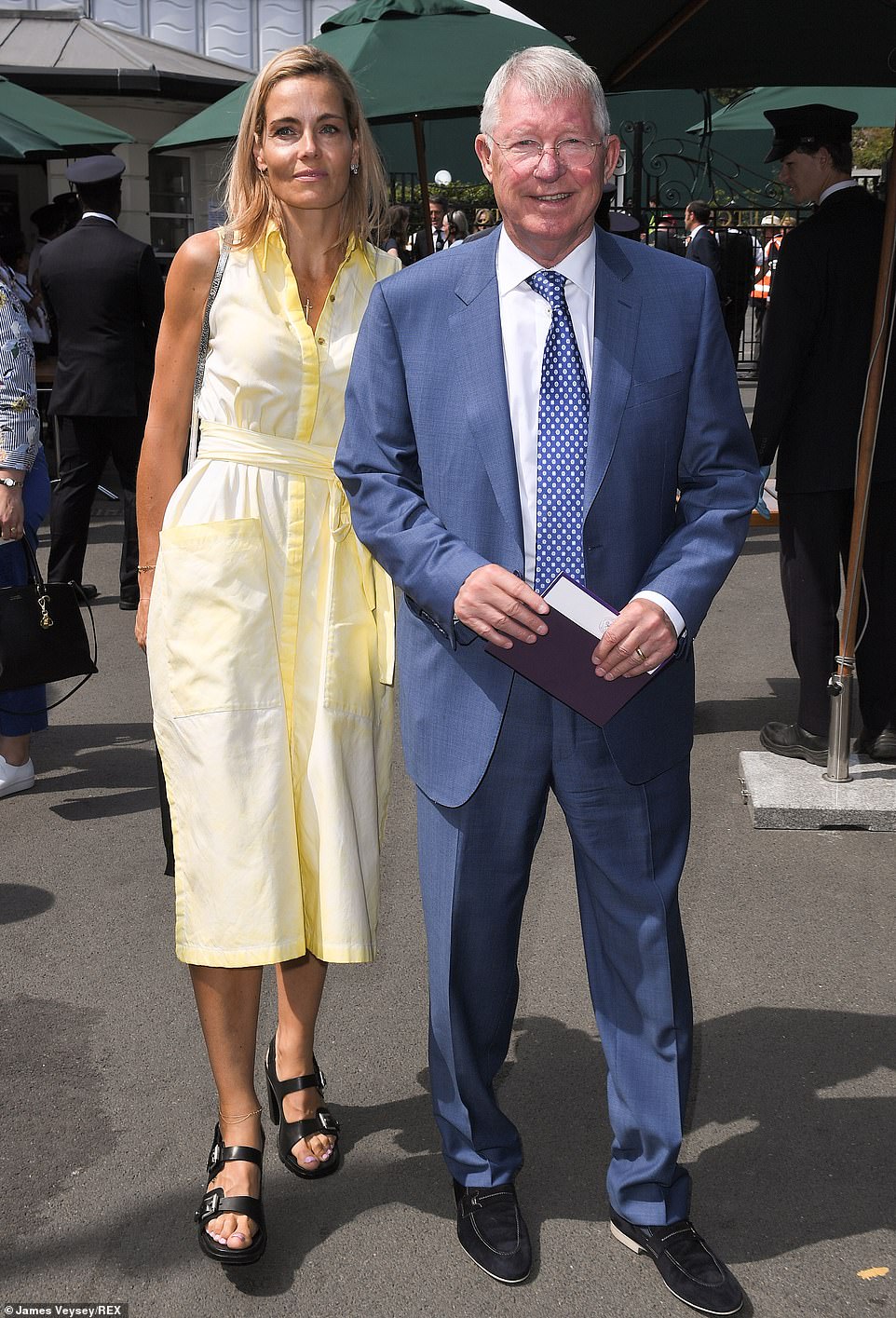 Nadal, 33, won that day in a five-set thriller and excitement is rapidly building for a similar encounter this afternoon with the 37-year-old Swiss.

Celebrities and dignitaries are expected to pack out the Royal Box and sponsor suites around the court to witness the historic encounter.

Djokovic will be first up on Centre Court for his semi-final against Spaniard Roberto Bautista Agut.

The 31-year-old has shocked many by reaching his first grand slam semi – including himself as he planned his stag party for Ibiza this weekend.

Instead, he has cancelled the event and is bringing six of his best friends to Wimbledon to watch him in action, while his ex-beauty queen fiancee Ana Bodi Tortosa will also be in the stands.