The rain cleared, the roof opened over Centre Court and, over the next two hours, some of those pesky cobwebs lingering around Novak Djokovic blew away, too. This was more like it from the defending champion.

Having stumbled into round two over four tricky sets against Soon-woo Kwon, Djokovic dispatched Australian Thanasi Kokkinakis 6-1, 6-4, 6-2 with little fuss.

It was clinical, clean and rather ominous for those hoping to break the 35-year-old’s stranglehold on this place, now tightened over 23 matches and four years. On this evidence, Djokovic will take some dislodging.

Kokkinakis, the world No 79, actually won a Grand Slam more recently than Djokovic, capturing this year’s Australian Open doubles title alongside Nick Kyrgios. Perhaps the 26-year-old might regret not taking heed from his partner here.

Perhaps some histrionics or melodrama might have knocked Djokovic off his stride. Not even the Australian’s fierce power did that. Not often enough, anyway. In fact, the dye began to set in as early as the second point.

Kokkinakis drew first blood with a promising blend of power and poise, pushing Djokovic back before edging ahead with a deft drop shot. Alas, that proved something of a parting blow, too. 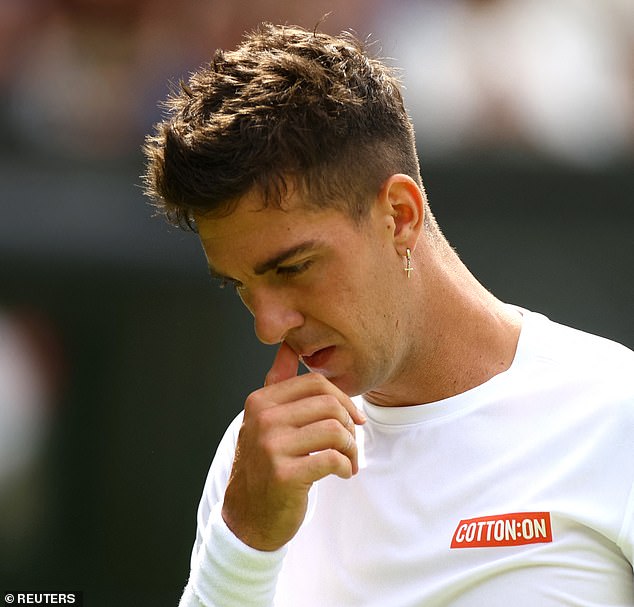 Moments later, the Australian appeared to break a string, prompting a change of racquet – and fortunes. Within 10 minutes, Djokovic was 3-0 up without moving out of second gear. Kokkinakis was wild and erratic.

The Australian’s power still caused Djokovic problems, the issue was stringing enough points together to win games. Especially when, at the other end, the defending champion was easing into a groove.

At 4-1, Djokovic forced a second break with a fine drop of his own. More lovely touch around the net wrapped up the first set in half an hour. By now, Djokovic was mixing up his depth brilliantly.

He hardly needed a helping hand, let alone two. So it was especially cruel when the top seed earned break points early in the second – first with a drop shot that clipped the net and dribbled over, and then with a razor-tight line call that went his way.

Djokovic didn’t need a third opportunity. Kokkinakis stayed within touching distance, holding on to his next service game despite a vintage display of Serbian stoicism: three times in a single point Djokovic repelled attempted passing shots at the net.

At the fourth time of asking, he put the volley away. Cue the loudest ovation yet around Centre Court. It was an exchange that illustrated just how hard Kokkinakis had to work to leave any dent on his opponent.

No wonder the Australian was soon banging his racquet on his head. No wonder that same head dropped in despondency moments later when Djokovic sent a winner arrowing into the corner. 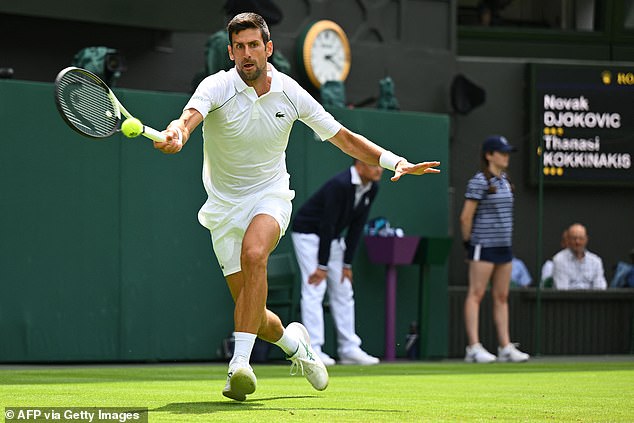 Djokovic, 35, is aiming to win his fourth straight title at the prestigious tournament in London

The No 1 seed had this match on a string and Kokkinakis was the unfortunate puppet being pulled to his script. Few had a better view than Boris Becker’s girlfriend Lilian de Carvalho Monteiro, and his son Noah, who watched on from Djokovic’s box.

Even when the Australian shanked a groundstroke just over the net, Djokovic made up the ground and dropped it back with minimal fuss. Easy as you like. And yet Kokkinakis refused to yield.

How this place savoured his saving four set points to make Djokovic serve for the second set. He duly did, of course.

And then Djokovic broke immediately in the third after a barmy game that included a foot fault and a punishing rally that ended with some of Centre Court on their feet – and Kokkinakis’ racquet on the floor.

The Australian took a tumble shortly after and, by the end, was almost out of ideas – resorting to showing Djokovic his behind as the Serb lined up a half-court ball.

Kokkinakis did save one match point and one fan shouted: ‘Make him work for it!’ The Australian stretched out his arms helplessly.

Who can blame him?