Wind rips entire roof off building in centre of Slough

A huge section of mangled roofing has landed in the middle of Slough High Street this evening, after strong winds battered Britain throughout the day.

Shocked onlookers were filmed sifting through the rubble, though it is unclear if anyone was injured after winds tore the roof to the ground.

Thames Valley Police are believed to be at the scene.

Footage of the roof in the middle of the high street of the Berkshire town was shared on social media this evening, with some clips showing a van under rubble.

It comes after a second storm in 24 hours ravaged Britain today, causing carnage all over the country. 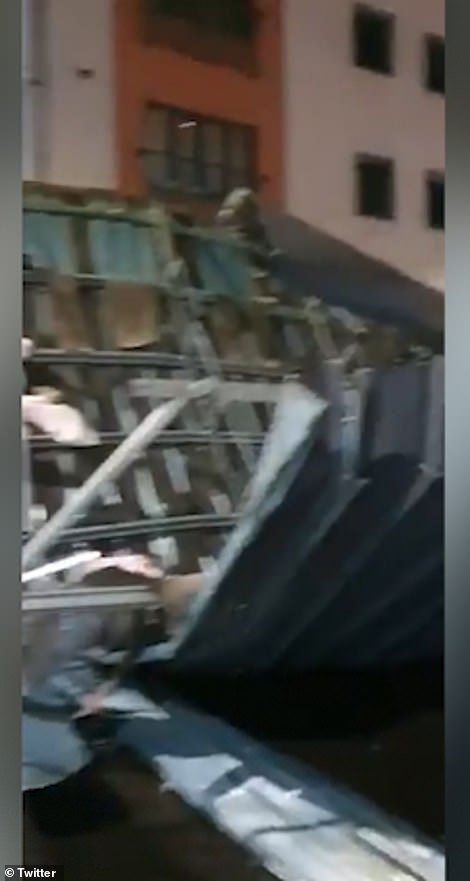 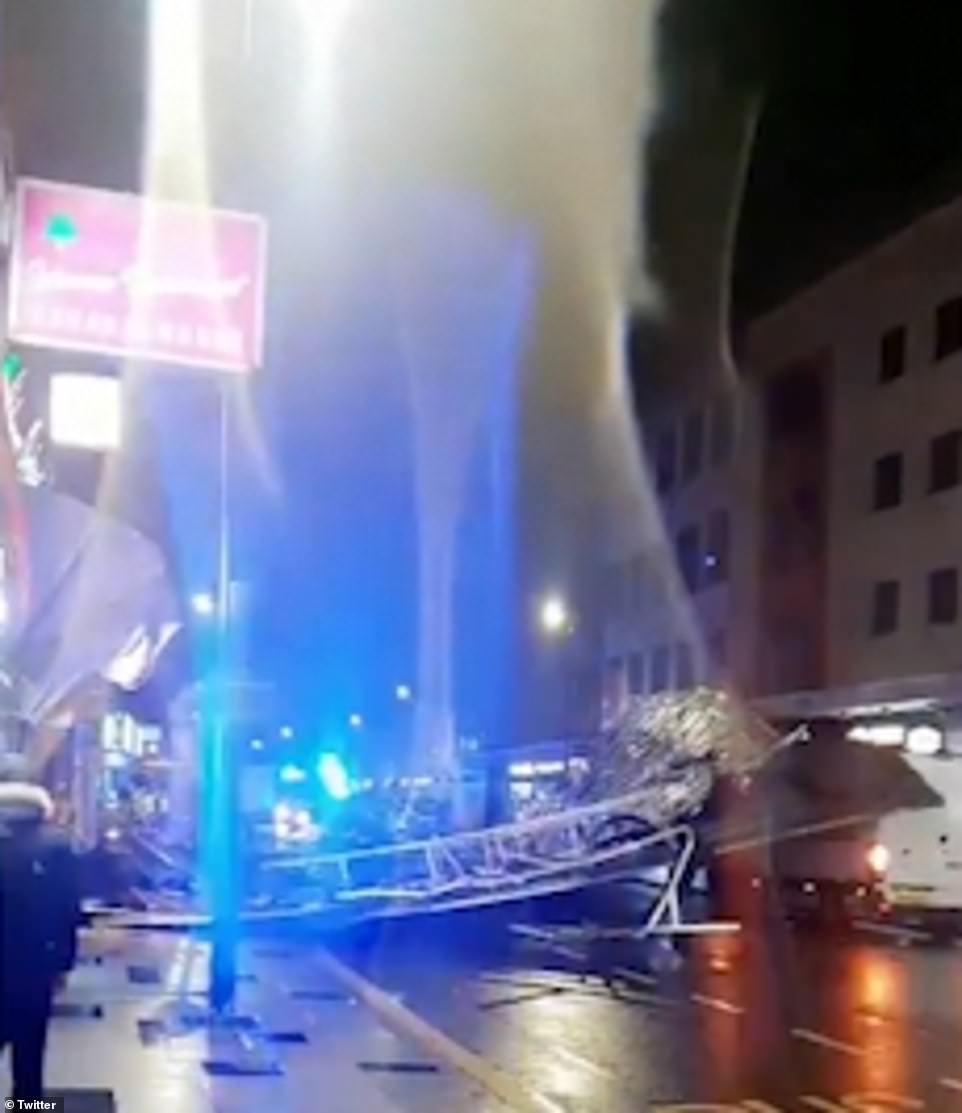 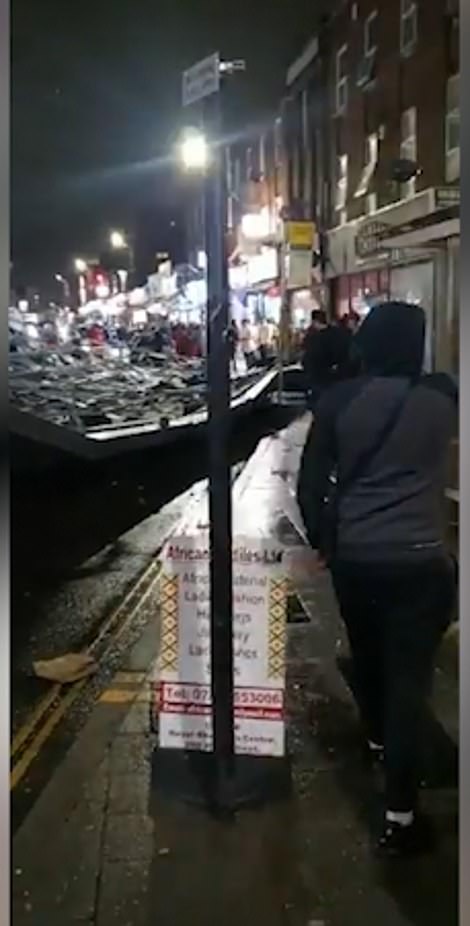 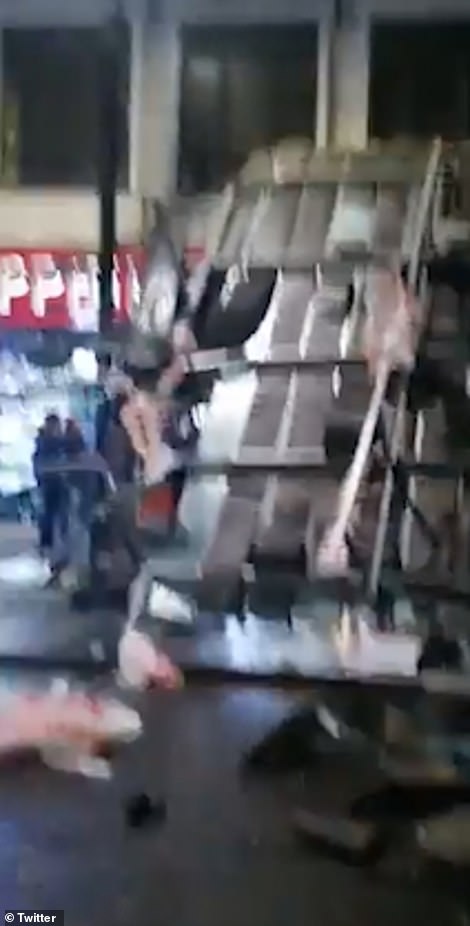 Stunned onlookers were seen sifting through the rubble this evening, though it is unclear whether the roofing landed on anyone

Commuters were earlier warned they face a miserable journey home today as strong winds from the second storm to hit Britain in 24 hours caused speed restrictions on some lines while others were affected by landslides.

Passengers travelling between Southampton, Bournemouth and Weymouth were warned over disruption, while there were also delays between Penzance and Exeter, and between London and Cambridge, Ely and Kings Lynn.

Network Rail shut the railway between Horsham and Dorking after a landslip near Ockley in Surrey as further warnings for this evening told of another low pressure system sweeping in after Storm Brendan hit yesterday.

Further 70mph winds into tonight will be accompanied by heavy rain – the worst of which will be in southern England until 9am tomorrow. Up to 1.6in (40mm) of rain could fall in hilly areas and 1in (25mm) at lower levels.

The rain led to tonight’s FA Cup third-round replay between Tranmere Rovers and Watford being postponed after the Prenton Park pitch fell victim to heavy downpours for three days in a row on the Wirral which left it unplayable. 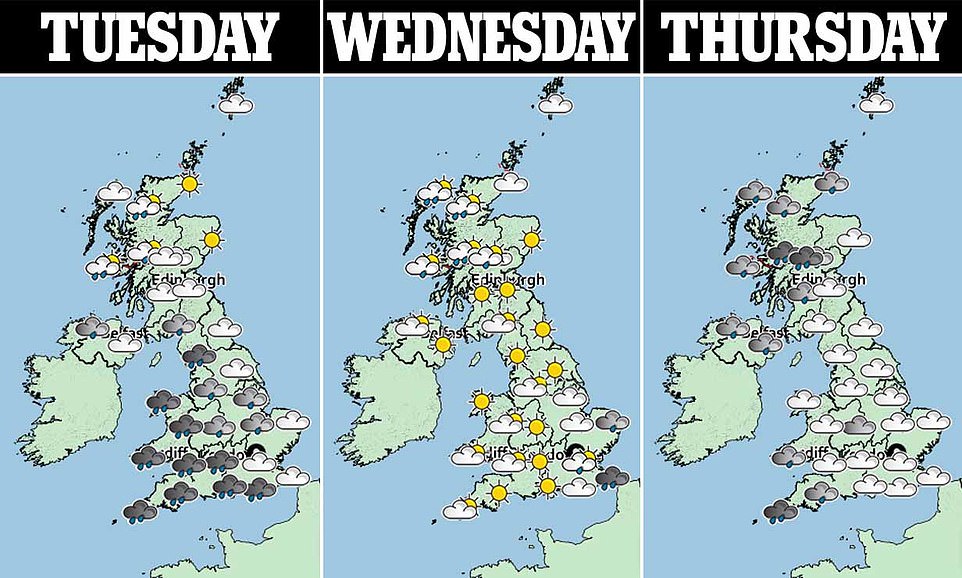 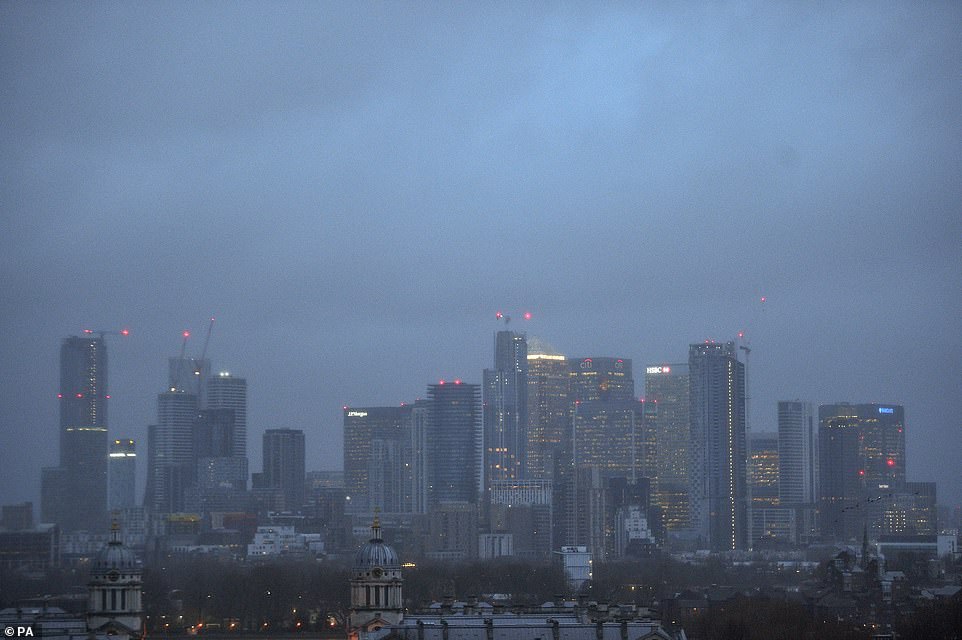 A misty view of Canary Wharf from the Royal Observatory in Greenwich, London, as weather warnings remain in force across the country 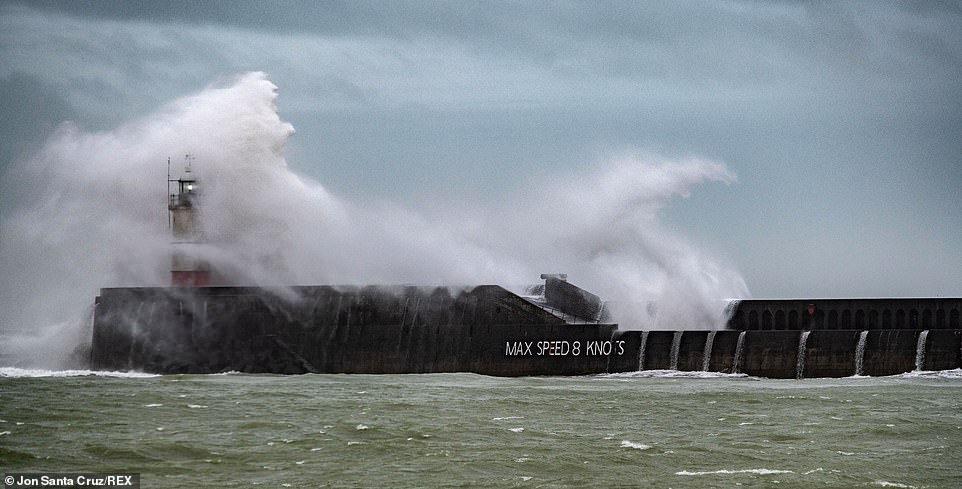 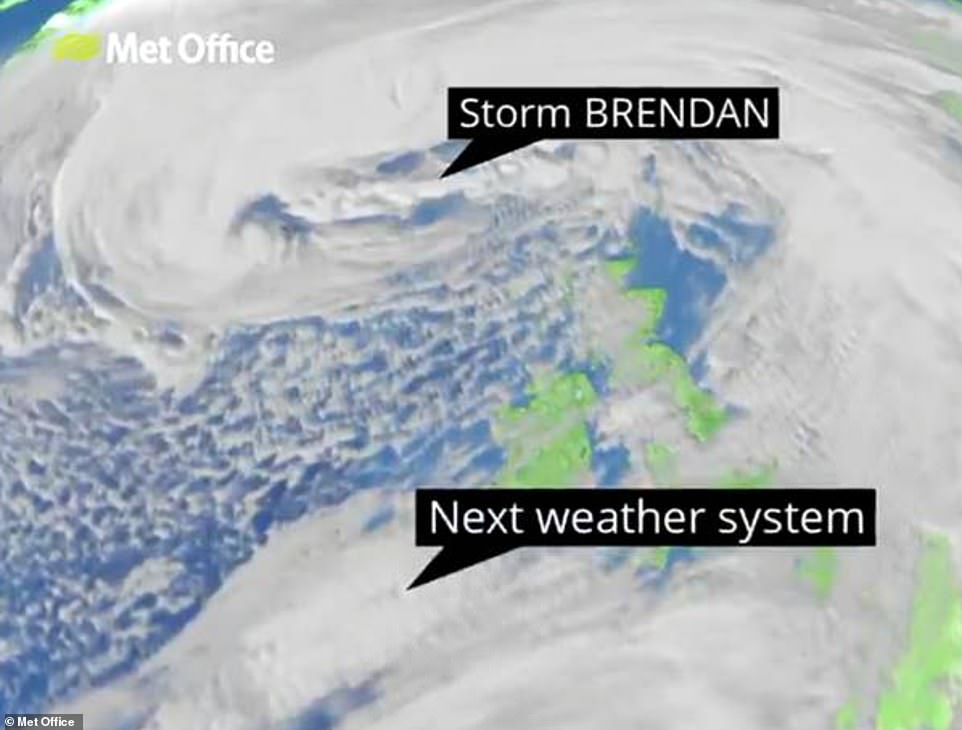 Storm Brendan has eased and is sitting just to the north of the UK, while another low pressure is now heading across England 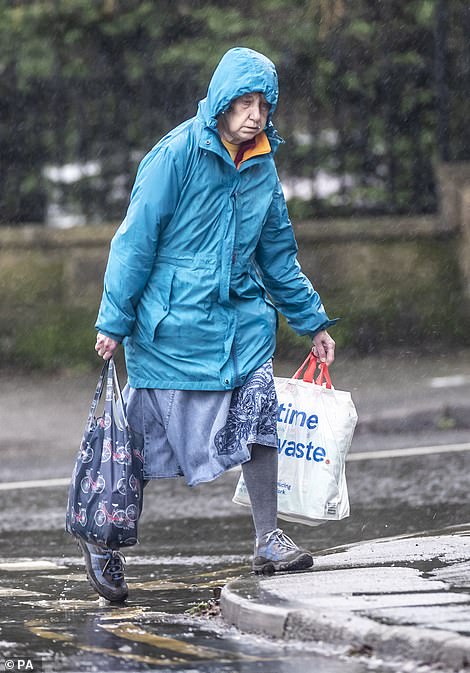 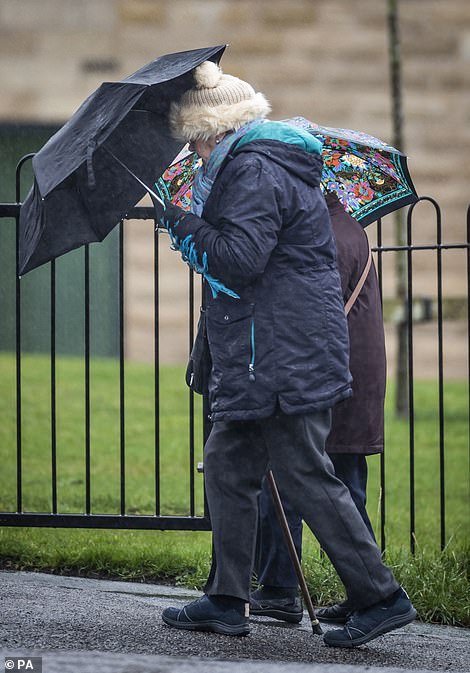 Women walk through heavy rain in Yeadon, West Yorkshire, today as the country is hit by downpours – with more to come

The strong winds have also seen delays to dozens of flights in and out of Gatwick Airport, with two Wizz Air flights, four easyJet services and one Norwegian Air flight diverted to other airports.

In Newcastle, barriers were put in place on the city’s Quayside amid fears a tidal surge could flood the streets following a flood warning imposed due to high spring tides, strong winds and low pressure in the North Sea.

CrossCountry warned of a reduced service between Southampton and Bournemouth due to high winds, with trains terminating at Southampton. Tickets will be accepted on South Western Railway services in the area.

Meanwhile a reduced service will also operate between Penzance in Cornwall and Exeter St Davids in Devon until 9pm, with delays of up to 20 minutes expected on both CrossCountry and Great Western Railway services.

Trains between Ascot and Ash Vale may be delayed by up to 30 minutes due to a tree on the line. Meanwhile Great Northern warned of delays between London Kings Cross and Ely or Kings Lynn due to high winds until 10.30pm.

It said: ‘A temporary speed restriction of 50mph will be in place between these stations. Great Northern may also have to make minor adjustments trains on this line to ensure that they keep delays and congestion to a minimum.’