The windscreen of a Flybe jet with 92 passengers on board cracked just minutes after take off.

This shocking picture shows the shattered glass of the cockpit window on the flight from Newquay Airport in Cornwall to London Gatwick.

The pilot of the Embraer 195 aircraft was forced to turn turn back at 12,000ft when the huge crack suddenly appeared.

Ray Ellis, 40, from Helston, Cornwall, was one of the passengers who were on board the 7.25am flight on Tuesday and as he left took a picture inside the cockpit.

The pilot had left the door to the cabin open as people disembarked so that they could see for themselves the problem that had forced them to return to the ground.

Mr Ellis said: ‘The plane slowed down a bit, then they made an announcement that there was a crack in the windscreen and they had to return to Newquay.

‘No fuss was made, no drama, all very professional.

‘Some people stayed to catch later flights, a lot of people left the airport to get a refund.’

The incident happened on an Embraer 195 aircraft, like the one shown here 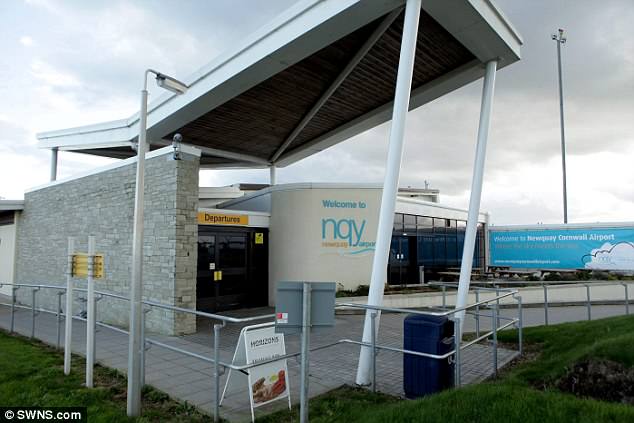 Mr Ellis, who works in IT and was on his way to a business meeting in the city when the drama unfolded, praised staff on board for keeping everyone calm.

Looking through the door into the cockpit, Mr Ellis managed to take a quick photograph of the damage.

The crack looks to cover much of the main window in the cockpit.

He added: ‘Everything was dealt with very professionally and a credit to Flybe and Newquay Airport.’

Flybe confirmed the incident and said that the landing had been due to ‘a crack appearing’.

A spokesperson said: ‘We can confirm that the aircraft operating the flight landed safely at Newquay without incident having returned from airborne following a crack appearing in the outer layer of its windscreen.’

The spokesperson added: ‘The captain took the necessary action and, as a usual precautionary measure, the airport put its emergency vehicles on standby.

‘Road transport has been provided for all 92 passengers to complete their travel to London Gatwick.

‘The safety of our passengers and crew is our number one priority and we apologise for the inconvenience experienced.’