Winner of $1.8million Lotto prize claims he ‘already knew’ they were going to win the top prize

The winner of a $1.8million Lotto jackpot has admitted he ‘wasn’t excited’ to discover his family had won because he was ‘already convinced’ they would take out the top prize.

The Adelaide couple held one of the 11 division one winning entries nationally in Saturday X Lotto draw 4153, drawn over the weekend.

Speaking with an official from The Lott on Monday morning, a man from Glenelg said he had discovered they were millionaires yesterday when he checked their ticket at home.

‘I called my wife into the house and she didn’t believe me. She just kept saying that it couldn’t be right,’ he said.

An Adelaide couple are the lucky winners of $1.8million after taking out a division one entry in Saturday X Lotto over the weekend (stock)

‘So when I checked the ticket, I wasn’t overly excited, because I knew It was going to happen. It really feels as though it was meant to be.’

The couple said they went out for lunch yesterday to celebrate their new-found fortune, but planned to have a big party at home to break the news to their family.

When asked how they planned to enjoy their million-dollar windfall, the contented winners thought of their family first.

‘I am so happy we’ve had this win because it will make a big difference to our family’s life. It will help them a lot,’ the winning man continued.

‘I am sure we will do something to spoil ourselves, but the majority of this prize is for our family.’

Glenelg Community Pharmacy owner Simon Bray said he could not be more thrilled for his winners.

‘I can imagine how excited the winners were when they discovered this news, especially on Mother’s Day!’

‘We’d love to send our congratulations to our winners! We wish you all the very best.’ 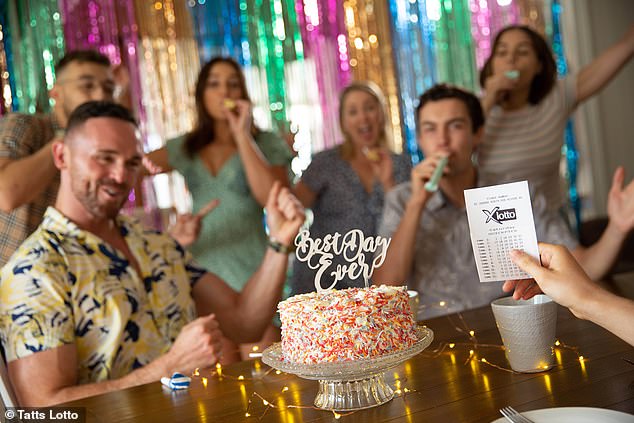 Across Australia, there were 11 division one winning entries in Saturday X Lotto draw 4117 – three in Western Australia, three in New South Wales, two in Victoria, two in Queensland and one in South Australia.

The Lott’s division one winning tally has now reached 155 so far this financial year, including 18 won by SA Lotteries customers.

In 2020, Saturday X Lotto created 122 millionaires across Australia, with a total of 312 division one winning entries which collectively won more than $355.13 million.

There are more chances to win big with Tonight’s Oz Lotto offering $2 million, while Thursday’s Powerball has $30 million up for grabs.

Tickets can be purchased at any licenced lottery outlet, online from thelott.com or via The Lott mobile app.