An award-winning Winston Churchill-themed cafe is being targeted by protesters – and has had to remove a giant mural of the wartime hero after repeated vandalism.

They can admire a World War II air raid shelter and pose for pictures alongside a sculpture of the wartime PM, whose extraordinary achievements are currently being celebrated in hit movie Darkest Hour.

The mural at Blighty UK cafe which was taken down after vandalism, which showed the Winston Churchill doing his two finger pose, and the mural jokily insinuates that he was ordering a double shot espresso

The cafe’s signature dish is ‘The Winston’ – a traditional full English breakfast with Cumberland sausage and Yorkshire black pudding.

But the mural had to be scrapped after vandals repeatedly defaced the design by spraying abuse including ‘scum’, ‘warmonger’ and ‘imperialist’.

And now protesters have even started a petition to try and force the owners to abandon their Churchill theme, which they claim is ‘using history in a light-hearted fancy dress manner’.

They are also objecting to Blighty India, a second cafe in nearby Tottenham, for its neon portrait of Gandhi, Bollywood posters and India flags, plus the chain’s branding which celebrates Commonwealth countries.

Co-owner Chris Evans, who styles himself as Horatio Bevans, grandson of a World War II fighter pilot, plans to expand his ‘Blighty Commonwealth of Cafes’ chain with Blighty Kenya next in the pipeline. 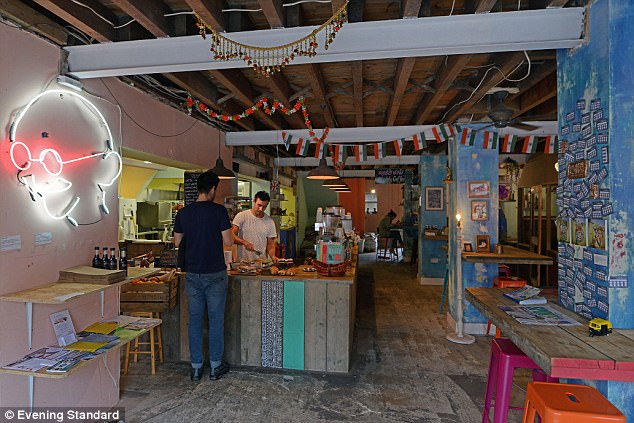 The Blighty India cafe, which is the sister cafe to Blighty UK, has a neon portrait of Ghandi, Bollywood posters and India flags

His cafes use coffee beans sourced from Kenya and Tanzania and Blighty UK won awards in 2015 and 2016 from London entertainment guide Time Out as a ‘community minded coffee house’.

In their online petition, they claim the cafes ‘insensitively evoke memory of the Empire’, writing: ‘We understand that many see the Commonwealth as a celebration of a group of countries but it has little to do with cafes.

‘While Blighty does make a point of sourcing its coffee from countries that are in the Commonwealth, we feel its framing of the Commonwealth is an outdated concept using its history in a light-hearted “fancy dress” manner.

‘We would like to step in now and ask them to adjust their brand whilst there’s still only two branches.’

Resident Jaime Peschiera also said he was ‘taken aback’ by Blighty India’s decor. He wrote: ‘It struck me as shocking that British imperialism, which perpetuated some of the worst atrocities humankind has ever known, was being celebrated at all.

‘The only goal appears to be to profit financially from a regressive, conservative ‘nostalgia’ that erases British colonial atrocity and the pain and oppression of those that suffered and continue to suffer from its enduring legacy.’

He added that the portrait of Gandhi was ‘perpetuating the cult of personality’ of someone scholars had found to be a ‘racist, misogynistic, abusive apologist for the caste system’.

The term ‘Blighty’ was first used by soldiers in the Indian army as a corruption of the Hindi word ‘bil*yat*’, meaning foreign land.

It became widely used slang for Britain when used by British soldiers during the First and Second World Wars.

Who was Prime Minister Winston Churchill?

Born in Oxfordshire in 1874, Churchill is a descendant of the Duke of Marlborough and studied at prestigious Harrow School, before he enrolled at Royal Military Academy Sandhurst on his third try.

Churchill was one of the people behind the Gallipoli campaign during the First World War, where some 86,000 Turkish, 29,500 British and Irish, 12,000 French and 11,000 Australian and New Zealand (‘Anzac’) troops died during eight months of fighting in modern-day Turkey.

He also served in the British Army in India, Sudan and South Africa – while commanding a battalion in the First World War after resigning from the Cabinet.

He was knighted in 1953, after turning down the position of Duke of London – as his son did not wish to take on the title because of his political career.

The Prime Minister resigned from office in 1955 because of his health, and in 1965 Churchill died after suffering a stroke at the age of 90.

Mr Evans defended his cafes’ themes and said that the vandalism of the Churchill mural and petition against his flourishing chain had been an ‘unnecessary headache’ while trying to expand.

He said: ‘We never imagined that Churchill or Gandhi would attract complaints.

‘We thought they were both widely-liked and admired figures.

‘After all, Darkest Hour cinema audiences are currently giving standing ovations to Churchill’s ‘We shall fight on the beaches’ speech.

‘The Churchill mural was just a bit of fun with the idea that he had two fingers up ordering a double espresso.

‘But, sadly, we had to get rid of it some months back after it was repeatedly vandalised.

‘We now have people running petitions against us.

‘It is simply silly to say we are celebrating British imperialism and colonialism.

‘We are just an independent cafe chain put together by people who work hard to make it happen and yet people seem to want to bring politics into it to try and drag us down.

‘All we are doing is celebrating a true British hero in Churchill and the ties between Britain and Commonwealth countries through the mediums of coffee and food.

‘These people are just giving us an unnecessary headache.’

And one local resident responding to the campaign online agreed. She wrote: ‘Sorry but is this a joke? They’re a small business providing employment in the local area.

‘Stop harassing them! Surely there are more worthy campaigns!?

‘I didn’t know they existed, so I’ll now definitely give them my custom!’