From wearing a toilet seat around his neck at a party in Sochi to wearing a bronze medal in Pyeongchang four years later. What a magnificent hustle this was by Billy the man-kid, who tricked and flipped his old body onto the Big Air podium on Saturday.

That he simultaneously carried Team GB to their record-breaking haul of five medals is worthy of note, and is doubtless a relief for those in the set-up who exchange promises for lottery funding. But, really, this wasn’t about that. How could it be about anything so stuffy?

Not when you consider the kind of wonderful lunatic that resides within Billy Morgan, who was the oldest man in the field at 28 but probably the biggest kid as well. 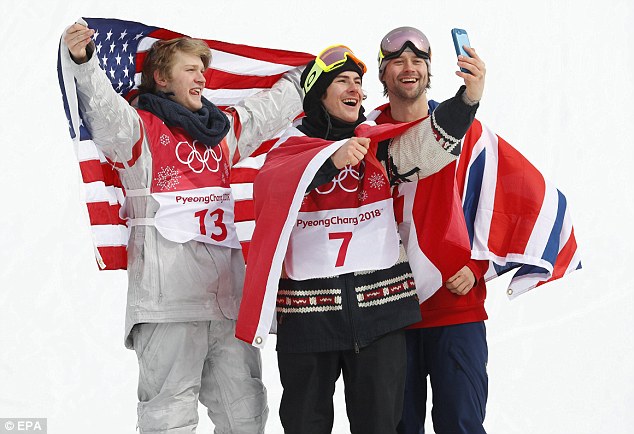 By his admission, spoken minutes after winning his bronze, he is cut from ‘the last generation of snowboarders who could get away with it’.

He has partied his way through his career, including these Games, and prepared for this final by thrashing around in the woods on an electric motorbike while younger rivals got some rest.

That is not to talk him down because the sport sees him as a pioneer – he was the first snowboarder to pull off a triple backside rodeo, involving three mid-air rotations, and to land a backside 1,800 quadruple cork – four flips and five full rotations.

But that was a while back. Here, he was a huge outsider with two dodgy knees, the left of which was badly hurt in December and kept him off the snow for almost two months. As recently as Wednesday, he was struggling with a blocked ear that needed syringing. No sport for old men, snowboarding.

Yet here he was. He crashed after his first jump, which is a desperately poor position to be in when you have three and your top two scores are combined. But then he delivered one routine of 82.50 points and then another of 85.50, for a total of 168 – just 0.75 points behind American Kyle Mack, with Sebastien Toutant of Canada taking gold. 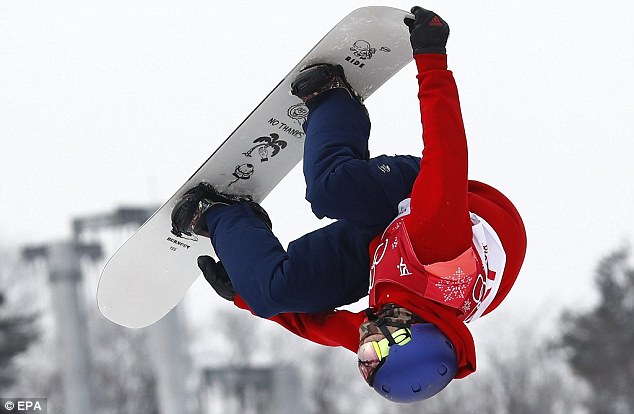 He nailed a big trick to score 85.50 and position himself in third place with 10 riders to go 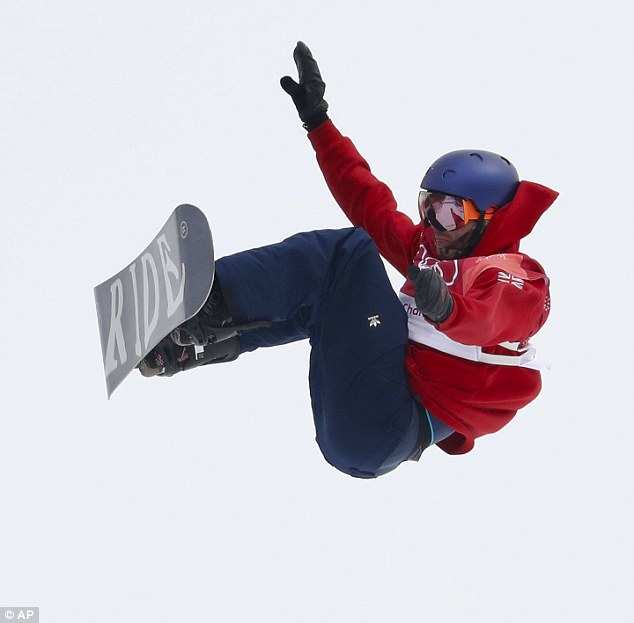 That is when he took his mind back to Sochi 2014, where he finished 10th in the slopestyle and then headed for a party and a toilet seat that made him famous.

‘But from the lowest of the low to having a medal. I can’t send it too hard tonight now because I’ve got to go and do stuff. Before I was down and out so I could do what I want.

‘I honestly didn’t think I could win a medal. I had some good luck on the day but that’s what makes this sport so interesting – you can do a trick 100 times but fall on that day.’

The trick that landed him bronze was, in his words, a ‘front-side 14 triple with mute and tail-grab -essentially it’s a triple cork frontside wipe’. That will make little sense to most, but it is so easy to relate to his personal tale.

‘I try to be as genuine as possible and I come from a very genuine background,’ he said. ‘I used to work on building sites to pay for my winters. 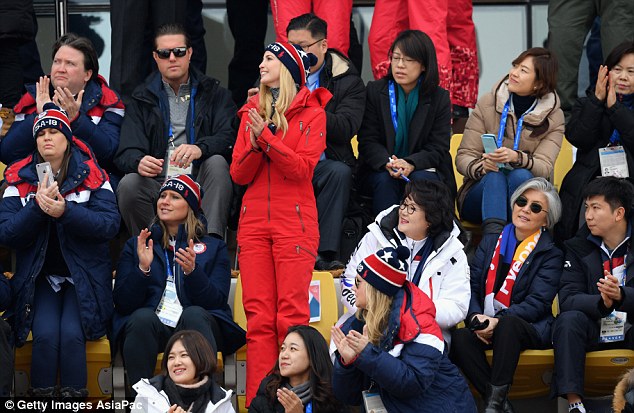 Ivanka Trump, daughter of the United States president Donald Trump, was in the crowd 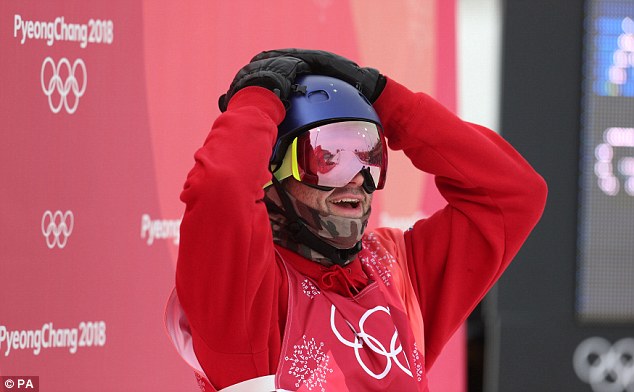 Morgan had to wait for 10 riders to follow, but his third place remarkably held firm throughout 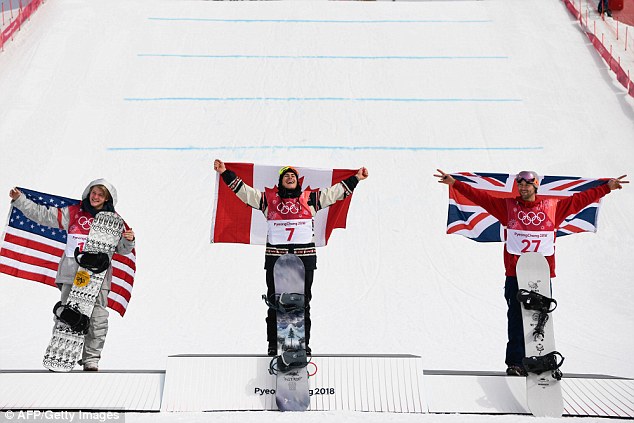 ‘This is the pay off. I’ve done this for a long time and I’ve not got that many medals. I got a bronze in the X Games and I thought that would be my main thing but it looks like this is it.’

There was one sober moment when he considered the recent heart aneurism and recovery by his father – ‘his friends call him Mad Eddie’ – and there was also an insight into the life of an ageing snowboarder no longer convinced of his invincibility. Intriguingly, and plausibly, it ties in with all the parties.

‘I come from the last generation of snowboarders who get away with it (partying),’ he said. ‘I use it as a distraction. I get scared a lot and I worry about it and it does help to have a couple of drinks, relax and not think about the scary s*** I have to do.

‘I’m 28 years old and I’ve maxed the limit of what my body can be scared about. The pay off after you do something you are scared about and you land on your feet, that’s why we do this, it’s the best feeling.’ 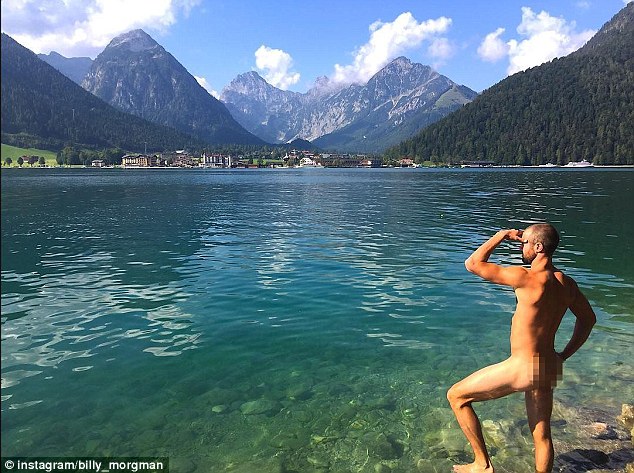 Morgan is renowned for his brash and confident style, summed up by his Instagram photos 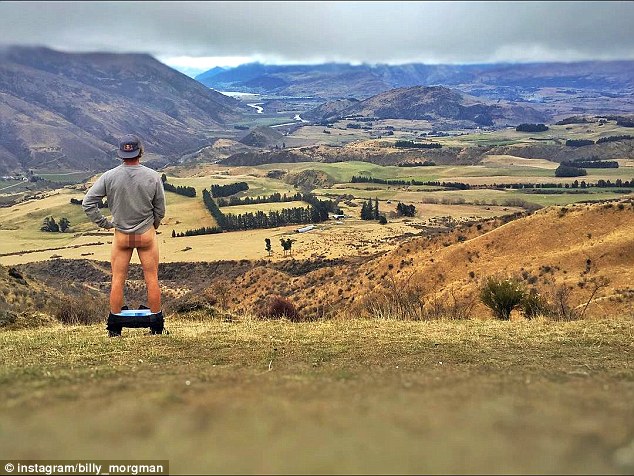 To his side, there was a beaming grin on the face of Hamish McKnight, British snowboard’s head coach.

‘He shows you don’t have to be a cold-hearted machine to be an Olympic medallist,’ said McKnight.

‘Billy can represent free sports as free sports are supposed to be presented. He parties at the right times. And the wrong times.

‘In all honesty, Billy is getting a bit more sensible with the way he approaches his off-time. The problem really is that his definition of “party” is a bit further than anyone else’s.’

The toilet seats of Korea have been warned.