These incredible photos seem to show a group of red squirrels preparing for February’s Winter Olympics.

Mini skis, a snowboard and even a tiny winner’s podium can be seen in the photos of the squirrel Winter Olympics, set-up by photographer Geert Weggen.

He captured the funny snaps after setting up the props outside his forest-based home in Sweden.

The 48-year-old from Bispgarden uses a mini outdoor studio with an open roof which is attached to a window of his house.

Weggen started photographing wild red squirrels in his garden five years ago and many of his images show the animals posing with miniature handcrafted props – he finds the lure of nuts helps attract the squirrels into unwittingly humourous poses.

He explains: ‘These photos I captured in the last four months. We already had snow in October here in the middle of Sweden, so I could create some winter sports pictures. The winter squirrel games is a funny, but difficult theme. There is not much light and although they visit my garden daily they are there only for a short period during the day. Many scenes have therefore taken me many days to complete.’ 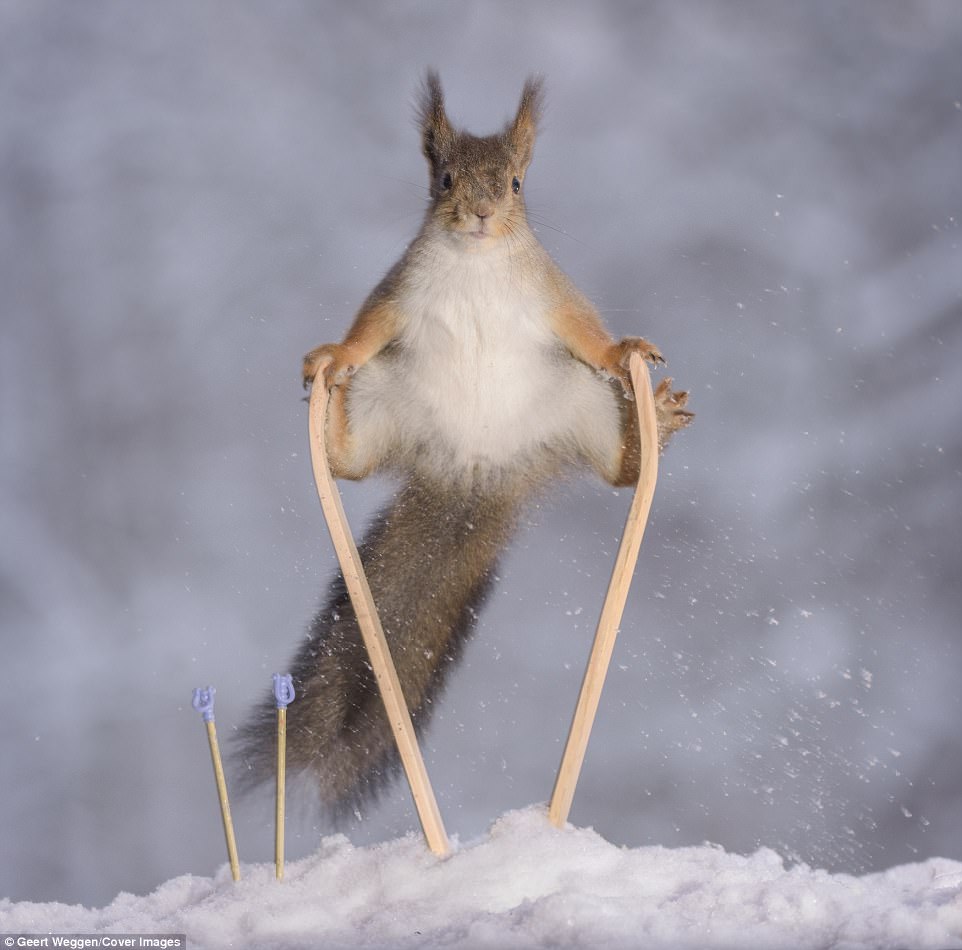 Although this red squirrel’s technique doesn’t seem to be the best, he looks ready to hit the Winter Olympic ski slopes 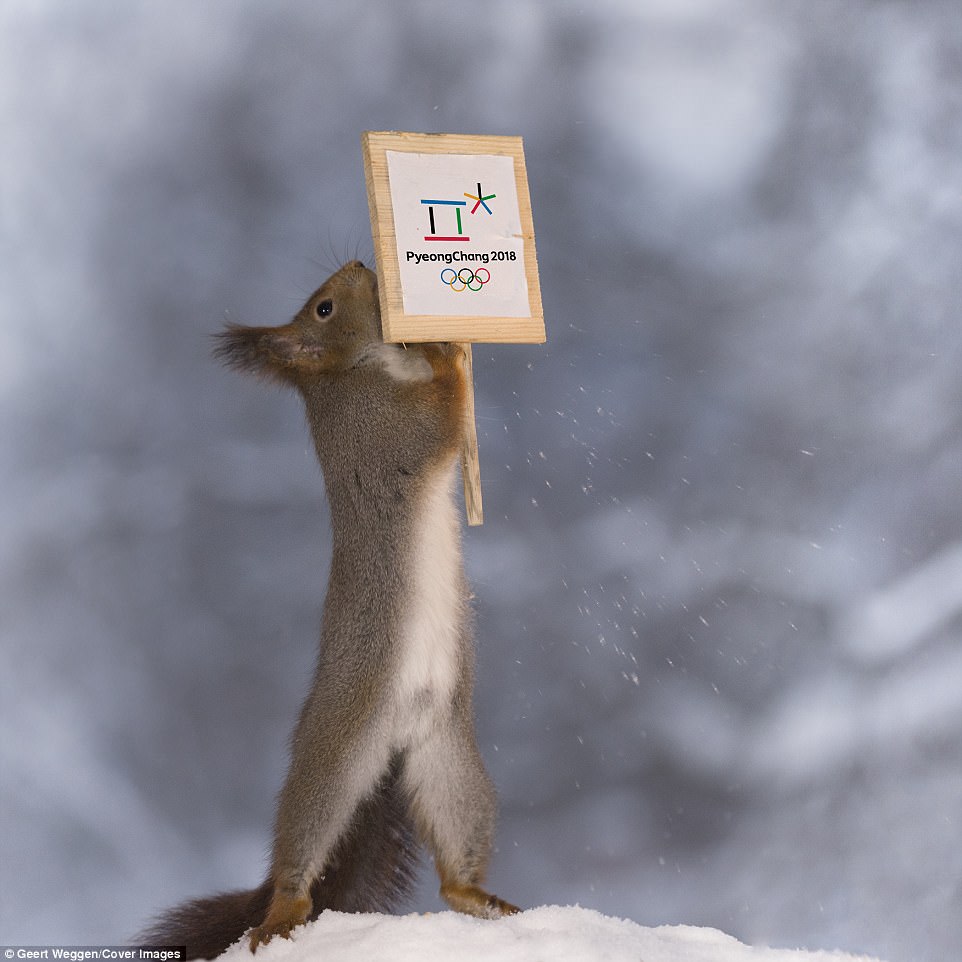 Weggen, 48, uses nuts to attract the squirrels and catch them making the hilarious poses with props, such as the Winter Olympic sign above 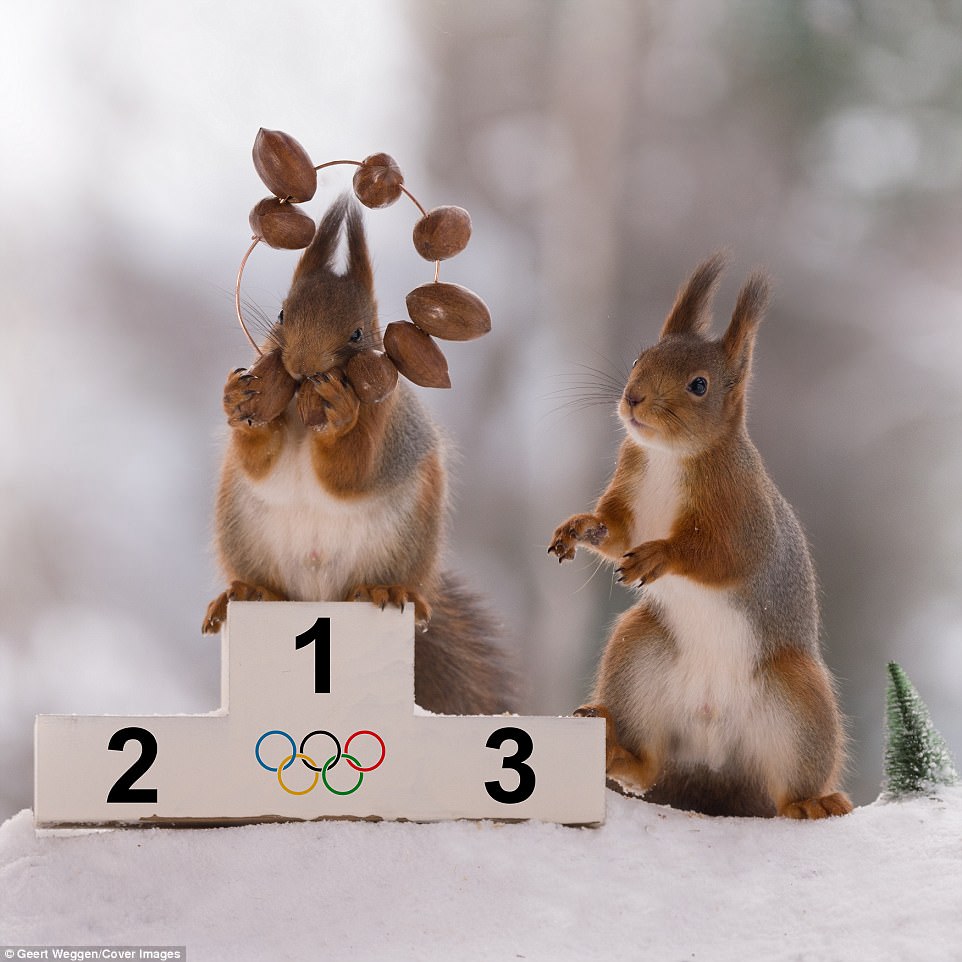 Second best: The squirrel on the right looks absolutely heartbroken as he watches another squirrel enjoy the nuts he failed to win 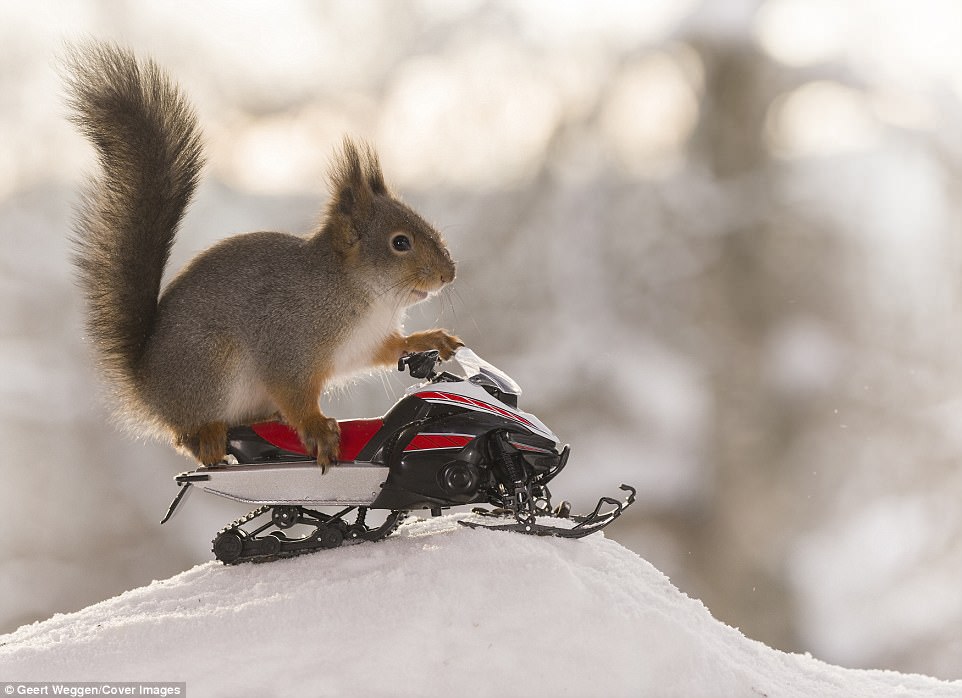 The squirrels look hilariously focused and determined in the photos captured by the Weggen, who started snapping the red squirrels outside his home five years ago 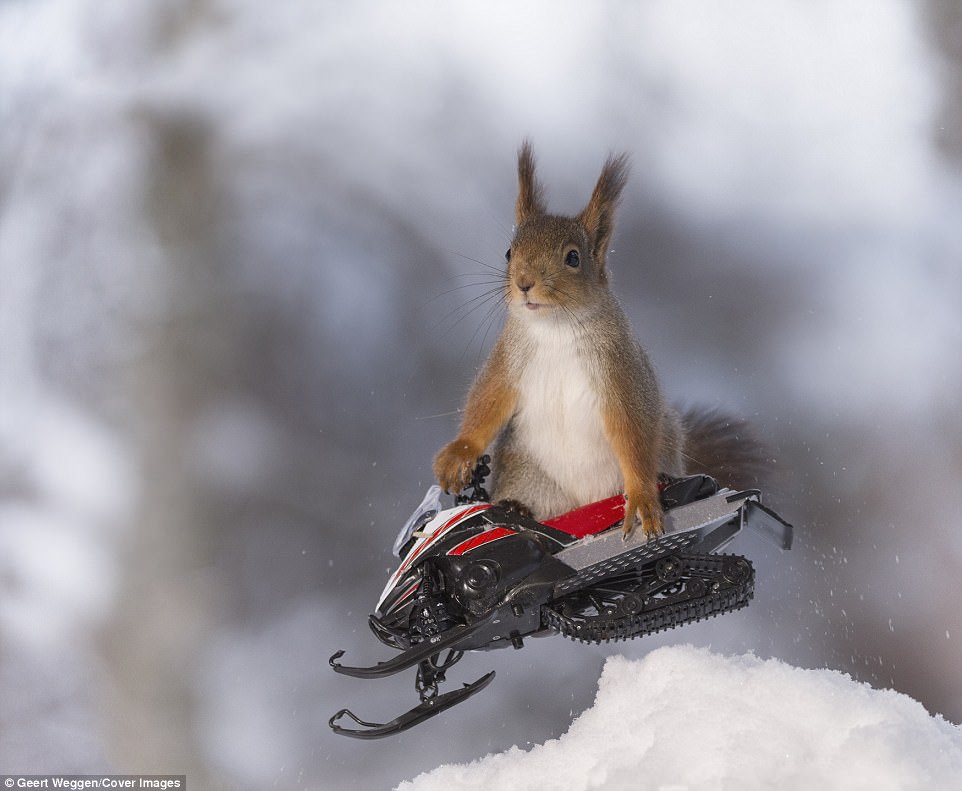 Uh-oh: This red squirrel seems to be regretting his love of nuts as the snowmobile he was perched on flies into the air off a mini snow cliff 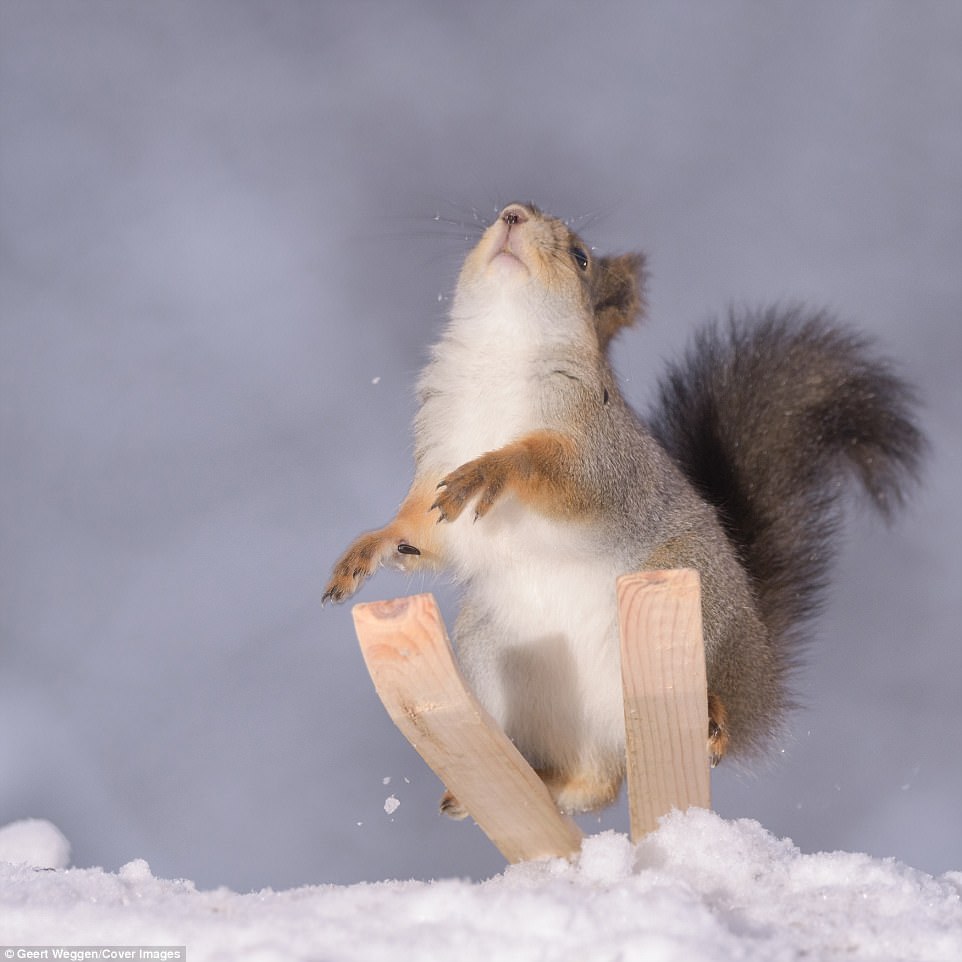 Posing for the paparazzi!: This squirrel seems to have taken the Winter Olympics into his stride, as he throws his head back to take in an imaginary cheering crowd 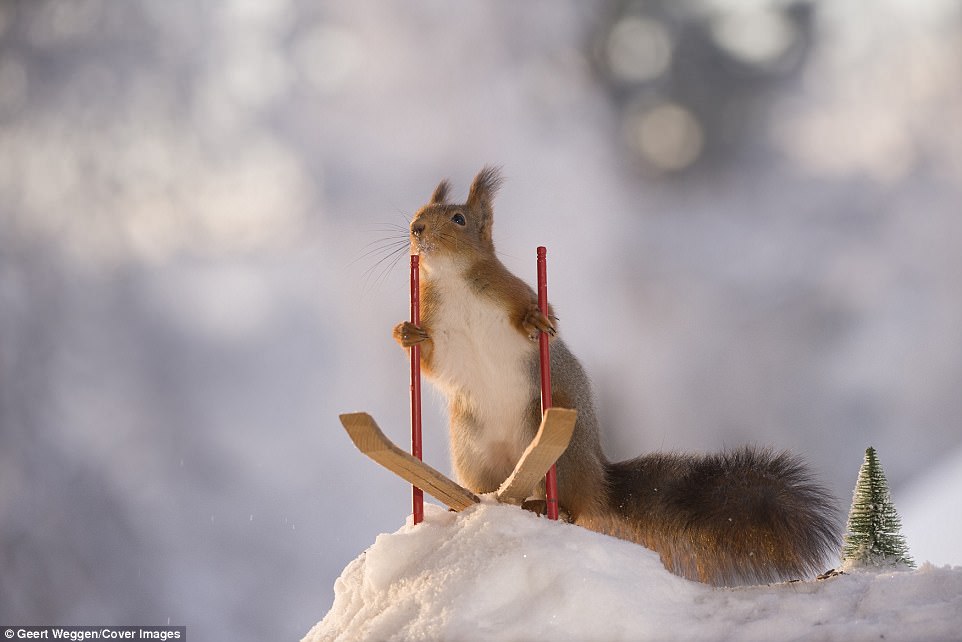 Weggen claimed that he used nuts to help attract the squirrels into the poses, but this particular competitor looks determined to get an Olympic medal 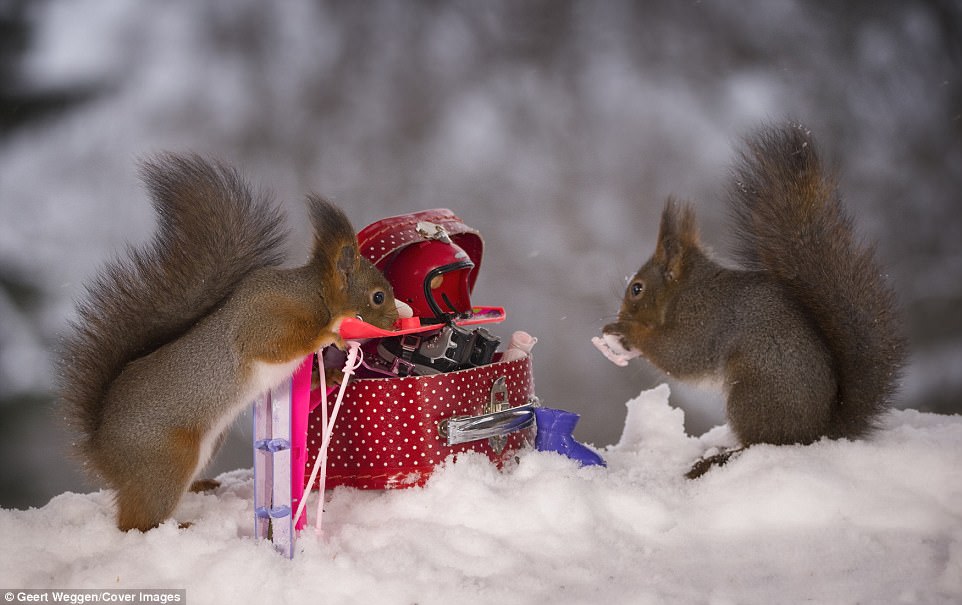 Weggen has become something of an expert at catching out the squirrels, the photographer from Bispgarden uses a mini outdoor studio with an open roof which is attached to a window of his forest-located house 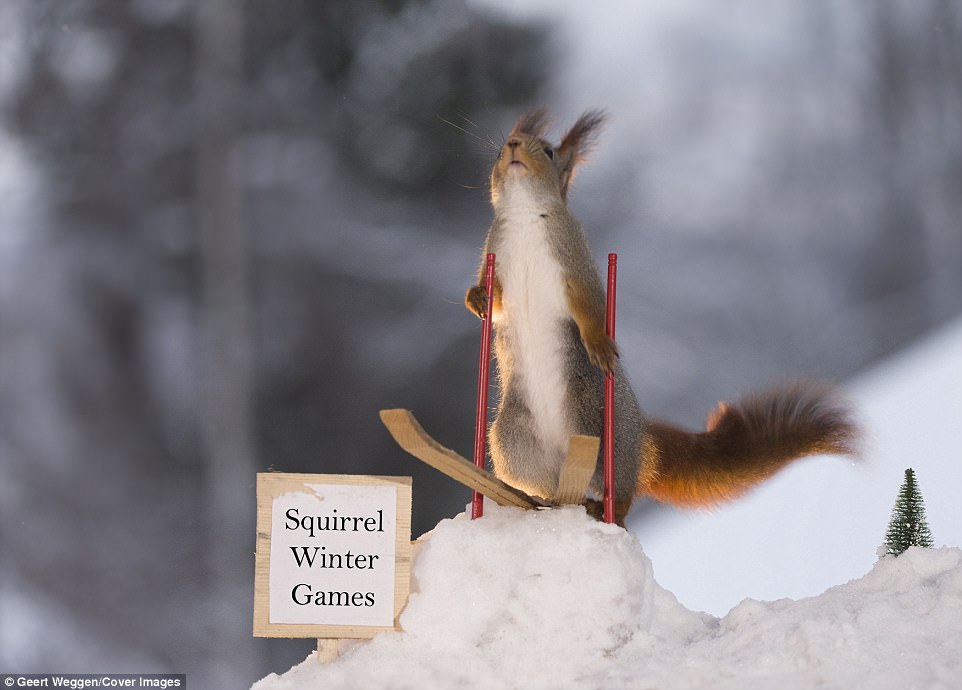 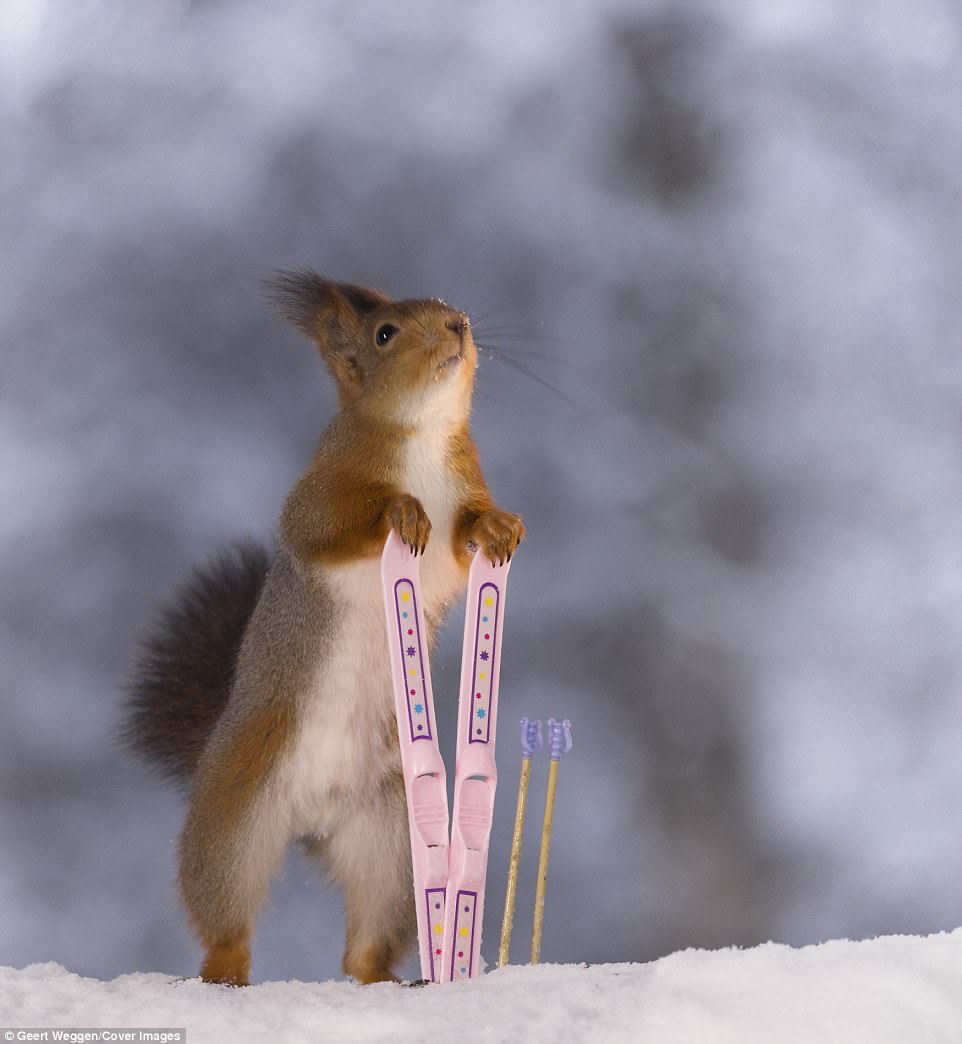 Erm not quite: Although a lot of the squirrels look like seasoned competitors, some just look confused at the props around them 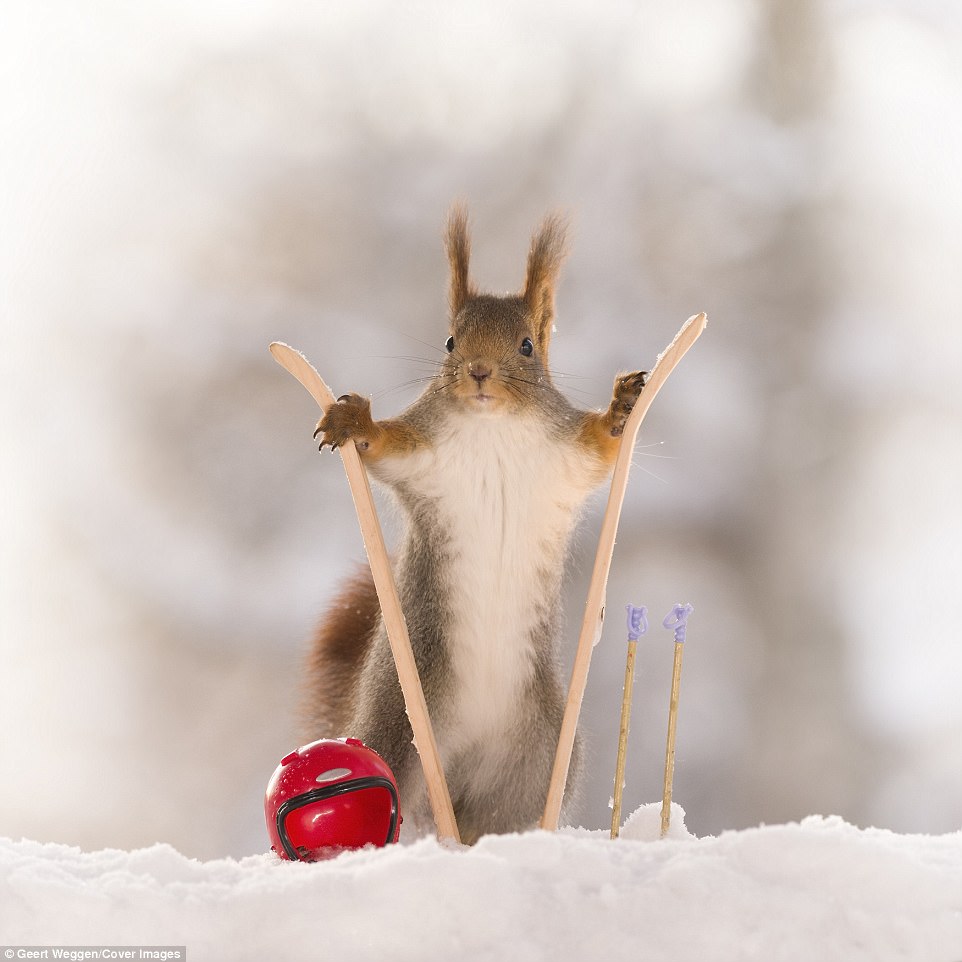 Almost: This squirrel also seems confused by the props laid out for him, though he seems to be enjoying playing with the big wooden skis 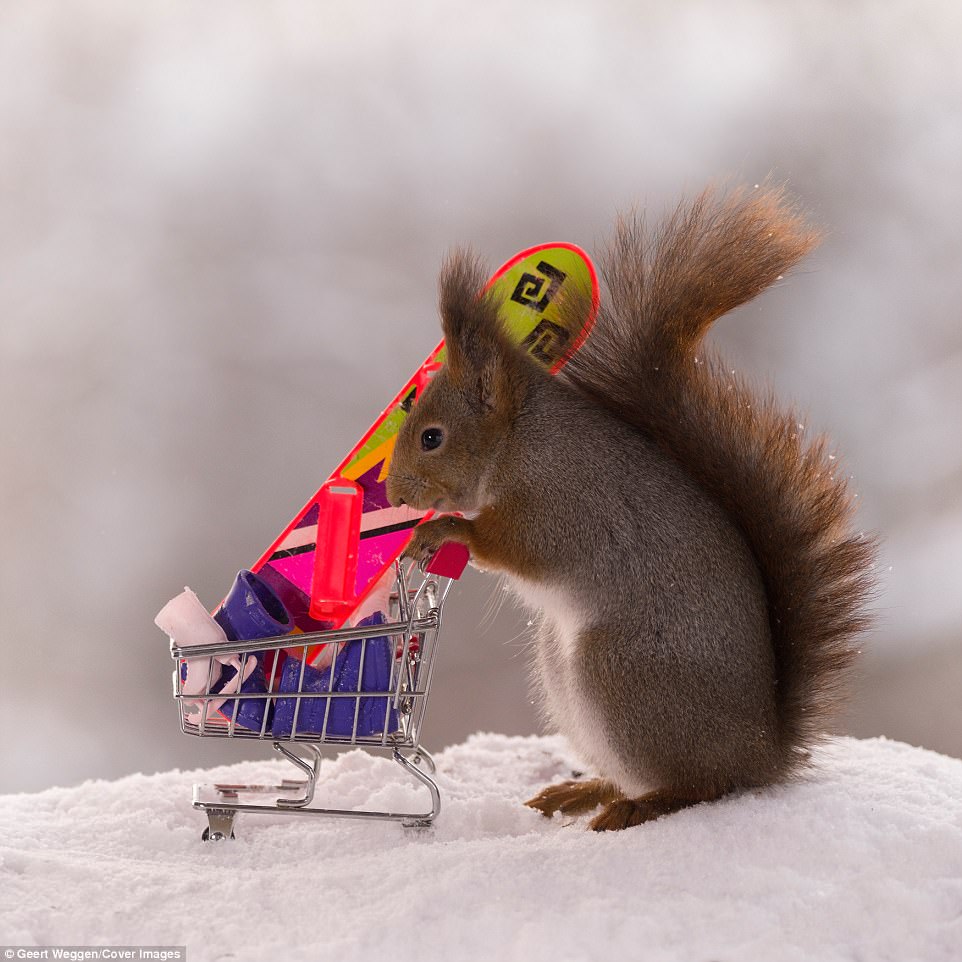 I’m done: This squirrel is either the most resourceful in the wild, or is simply done with the whole spectacle, taking away his equipment in an adorable mini-trolley 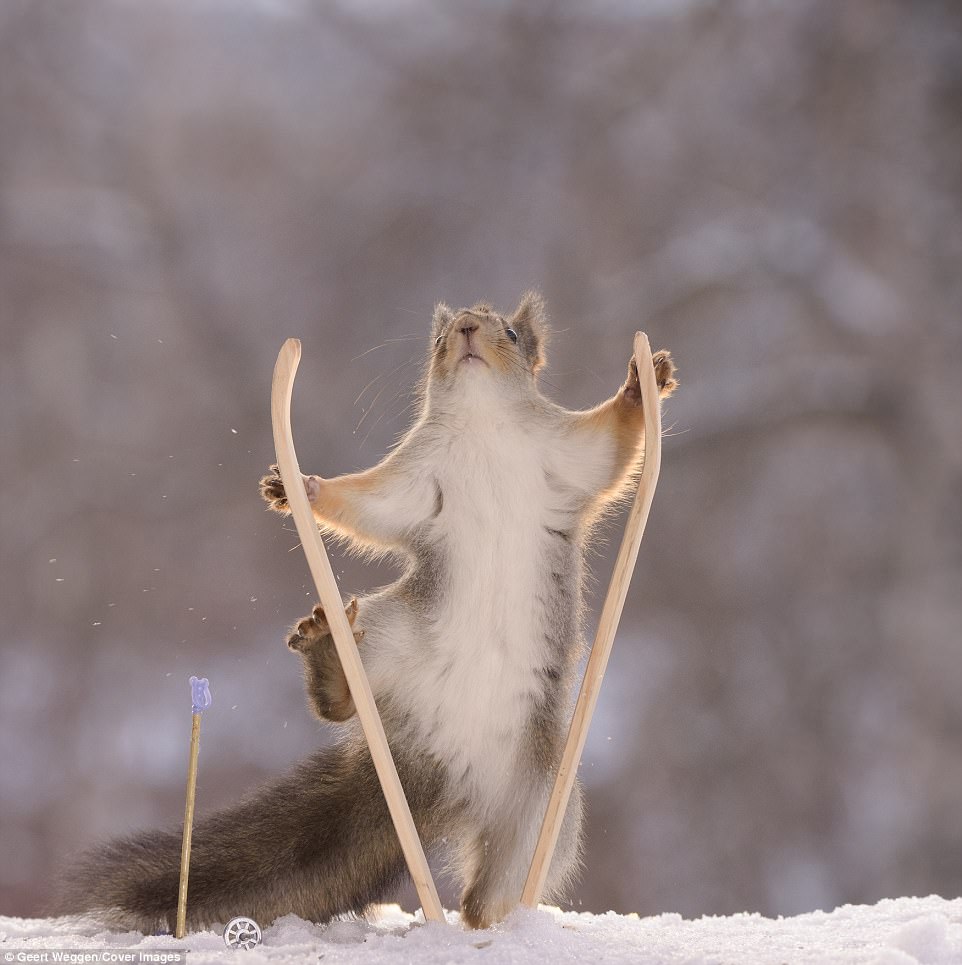 Erm, still not right: This squirrel keeps trying to use the skis properly but he looks more like a dramatic actor than a professional athlete 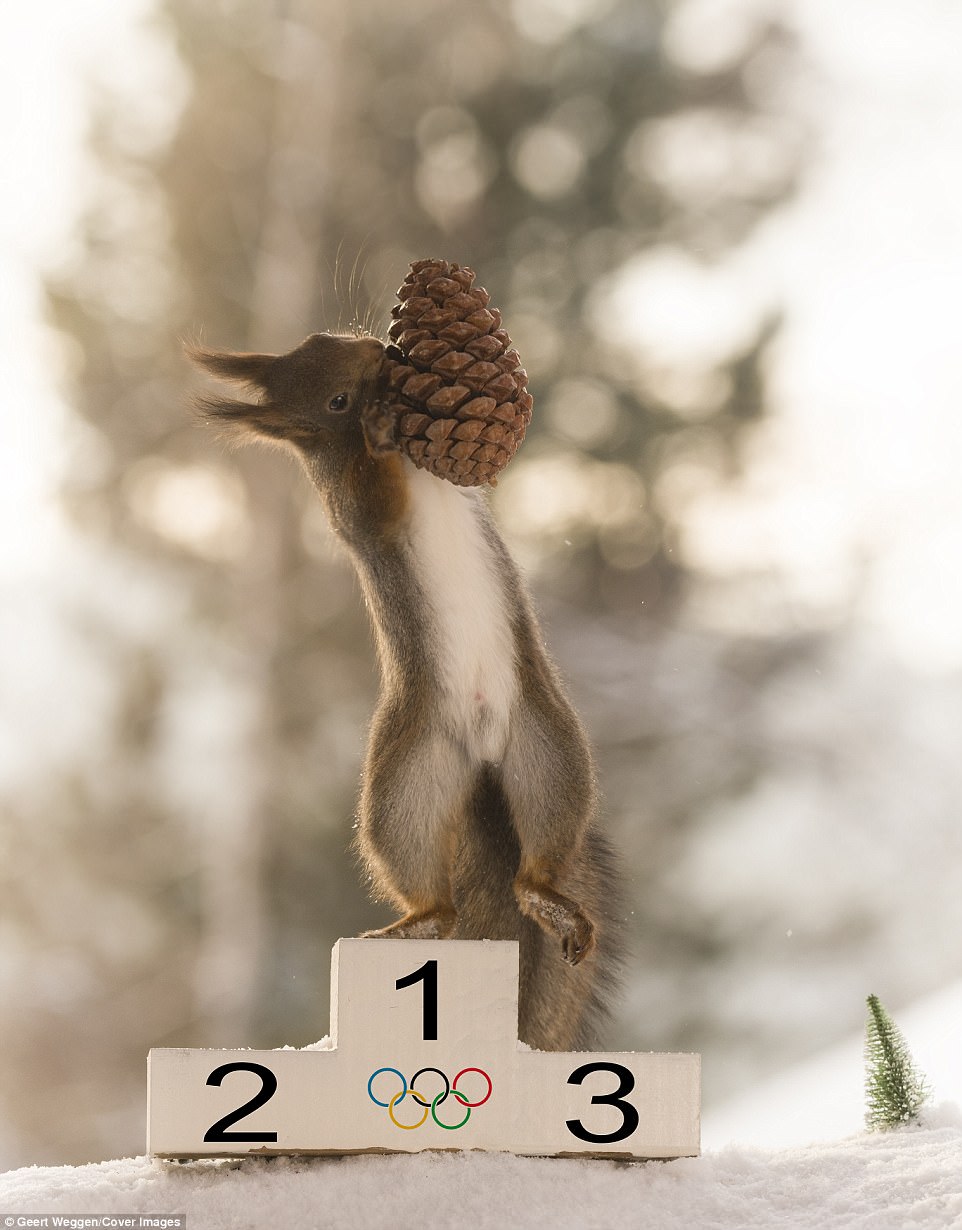 Kissing the trophy: The squirrel looks like a footballer as stands on top of a special mini-podium celebrating his victory by kissing an acorn