Winter wave of coronavirus could be even more devastating than the current crisis, experts say

A second wave of coronavirus this winter could be even more devastating than the current outbreak, scientists have warned.

If a surge in COVID-19 cases coincided with the start of the flu season it could pile even more pressure on the NHS, experts say.

Dr Joe Grove, a virologist at University College London, said with no cure in sight and a lack of immunity, there was nothing stopping a second wave.

It comes after the director of the US Centers for Disease Control and Prevention predicted a second coronavirus crisis would be ‘more difficult’ than the current one.

Figures suggest that less than 10 per cent of Britons have been infected with coronavirus, meaning the vast majority of people are still vulnerable to catching it.

There have been nearly 130,000 confirmed cases of COVID-19 in the UK, but tens of thousands more are likely to have had minor symptoms and not been tested.

A second wave of coronavirus this winter could be even more devastating than the current outbreak. Paramedics wheel a patient into The Royal London Hospital on Tuesday 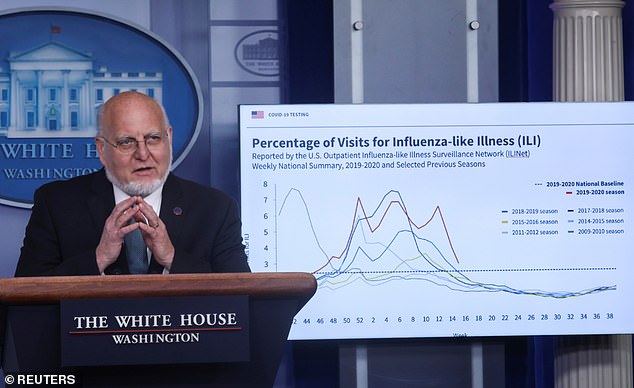 The director of the federal Centers for Disease Control and Prevention Robert Redfield, pictured, said Tuesday a second wave of coronavirus next winter could be ‘even more difficult’ because it would coincide with flu season 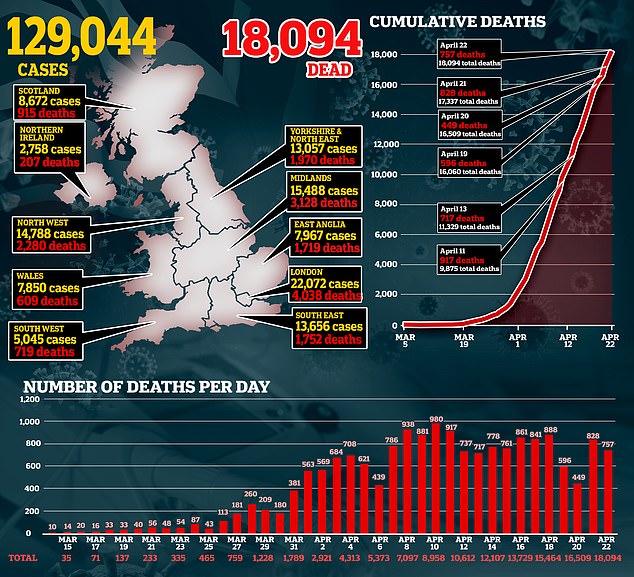 Dr Grove told MailOnline: ‘There is potential for a second wave because the majority of the population isn’t immune to the virus.

‘Preliminary data from antibody studies in other countries shows that the number of people who have been infected and therefore are immune is somewhere below 5 per cent.

‘It means the majority of the population does not have immunity and are still susceptible to catching it.

‘If a second wave was to coincide with seasonal flu then you potentially have exacerbation of the outbreak because because both coronavirus and flu can lead to hospitalisation.

‘It could overwhelm the healthcare system. That’s not to say it will happen, but it’s plausible.’

Dr Grove echoed concerns by the director of the US Centers for Disease Control and Prevention, who yesterday predicted a second ‘more difficult’ coronavirus crisis.

Dr Robert Redfield warned Americans the ‘assault on our nation’ could potentially be ‘even more difficult than the one we just went through’.

He told The Washington Post: ‘And when I’ve said this to others, they kind of put their head back, they don’t understand what I mean.’

Some Tories have been pushing a ‘traffic light’ plan for easing the crippling lockdown curbs – but scientists have warned that the situations is currently too volatile for even small loosening, and sources have made clear schools are unlikely to open before June

France and the Netherlands are the latest European countries planning to re-open schools after a weeks-long break because of the coronavirus pandemic.

French primary school children are due to return to school on May 11 with a maximum of around 15 children per class.

Older children will return a week later on May 18, but schools will only be allowed to resume if they meet strict health conditions.

Dutch children will also start to return on a ‘part-time’ basis from May 11 and can start playing sports together as soon as April 29.

Some German children are back at school already as they prepare for exams, while others will return in the coming weeks as the country’s 16 states set their own rules.

By contrast, the UK government says there is no date lined up for the end of school closures in Britain.

Mr Redfield issued his bleak assessment after labeling anti lockdown protests and calls to liberate states by President Donald Trump as ‘not helpful’.

Dr Grove said he ‘tended to agree’ with Mr Redfield, but added that if social distancing measures were still in place it could stop the spread of both viruses.

A human vaccine trial is already underway at Oxford University, but the Government’s scientific advisers say it’ll be 2021 before one is ready.

Dr Grove said antibody tests were essential for understanding how to respond to the virus if it causes another crisis in winter.

Antibodies are proteins in the blood which reveal if someone has already fought off an infection, including the deadly coronavirus.

‘The true death rate allows public health experts and epidemiologist to asses what the effects of another epidemic would be.

‘A lot of our current policy has been determined by the predictions of computer simulations. But those models are only as good as the data you put into them.

‘So there would’ve been estimates of death rates and infections, but as we get firmer numbers we can run more accurate simulations and predict with more confidence what might happen in future.

‘This is critical for working out if given epidemic will overwhelm the healthcare system again.’

UK health chiefs have plans to conduct the ‘biggest surveys in the world’ to discover how many of the population have some sort of immunity to the virus.

But they are miles off the 5,000 per week target – Department of Health data shows only 600 were carried out at the Porton Down laboratory yesterday.

By comparison, Italy has begun screening the blood of 20,000 people a day, while one programme in the US will involve 40,000 healthcare workers.

Germany plans to test 15,000 people and apply the findings to its whole population, and even Andorra has ordered 150,000 kits – enough to give its entire population two each.

The US, Finland and the Netherlands have all launched antibody testing to get a grip on the crisis.

Officials promised Britons would be able to do antibody tests in the comfort of their own home in the near future, buying them from Amazon or Boots.

But officials claim the tests they have looked at are not accurate enough to be used, saying they range from between 50 and 70 per cent.

Experts stress the more people screened, the clearer the picture on the true size of the UK’s crisis, which began spreading on British soil in February.