These incredible images show the aftermath of a freak snowstorm that left parts of the Middle East covered in a blanket of snow.

The Iranian capital of Tehran was transformed into a winter wonderland after temperatures plunged and as much as 4ft of snow fell.

Locals made the most of the change in weather and were pictured writing their names in the snow, sledging down hills and taking their 4x4s for a spin.

Friends made the most of a rare snowstorm in the Iranian capital of Tehran and were pictured frolicking in the white stuff in the city’s Mellat Park. The storm has caused chaos across the region and left Tehran’s airports closed 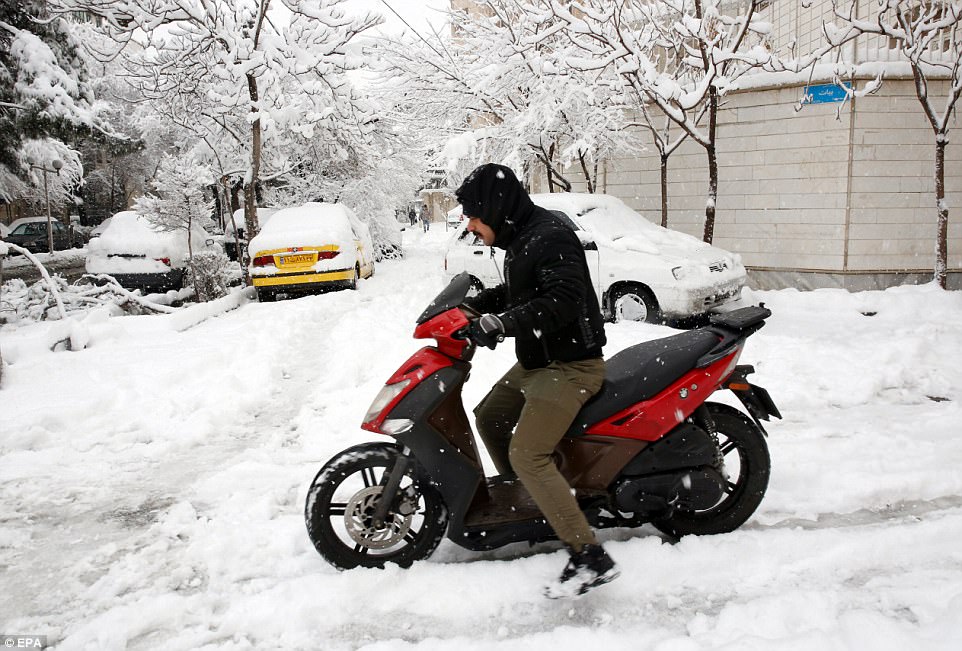 A scooter rider got his bike stuck in the deep snow on Sunday after Iran was blanketed in up to four feet of snow. The surprisingly heavy storm prompted the government to declare a one-day holiday for schools in the capital 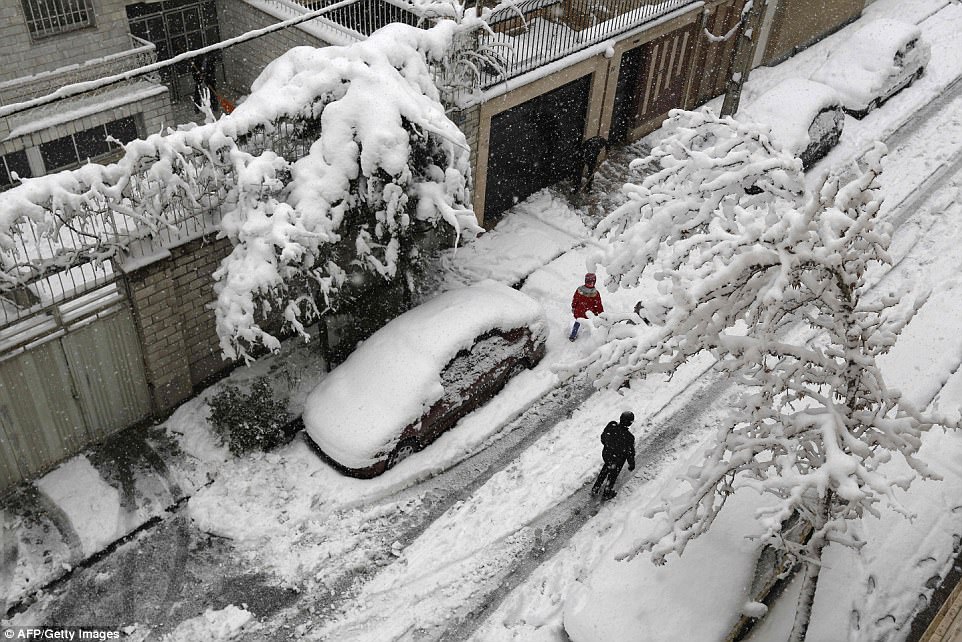 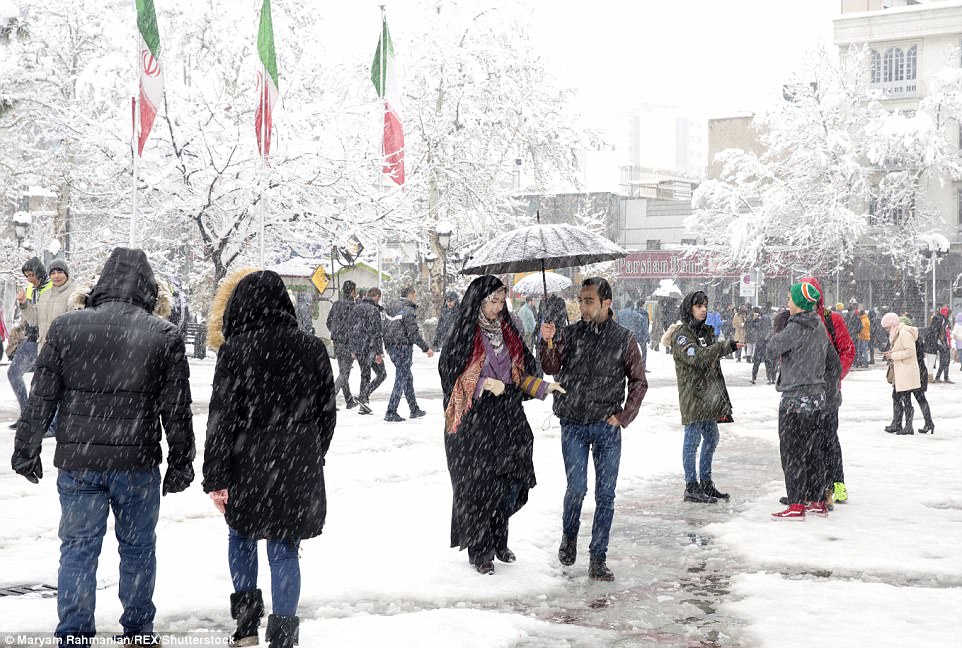 The snow failed to deter locals from getting out and about and many wrapped up warm to brave the unusual conditions in Mellat Park, north Tehran 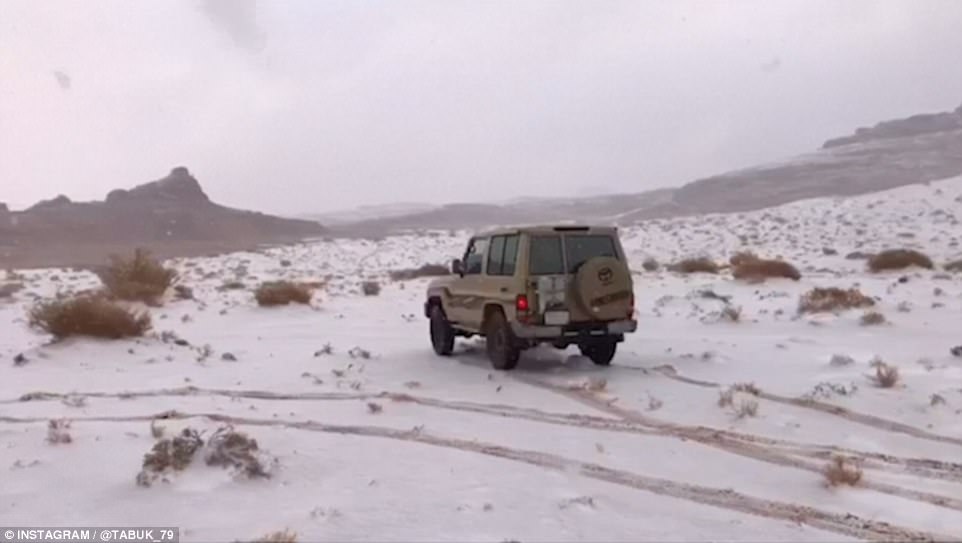 Roads were buried under several inches of the white stuff and motorists were pictured shovelling it away in a bid to improve driving conditions.

Elsewhere, families making the most of the rare weather posed for pictures while others were spotted wrapping up warm and protecting themselves from the elements with umbrellas.

And the heavy snowfall shut the two main airports of the city and there were reports of electricity cuts.

Local media reported surprisingly heavy snowfall, prompting the government to declare a one-day holiday for schools in the capital.

Snow fell across the Middle East, including on Syria, Lebanon and Saudi Arabia as the region experienced an Arctic blast.

Pictures uploaded to social media showed sandy hills blanketed in snow while another captured a group of camels covered in the white stuff.

And there was the unusual site of a group of men huddled around a fire for warmth.

Hundreds of visitors flocked to the region to take a look at the snow for themselves. 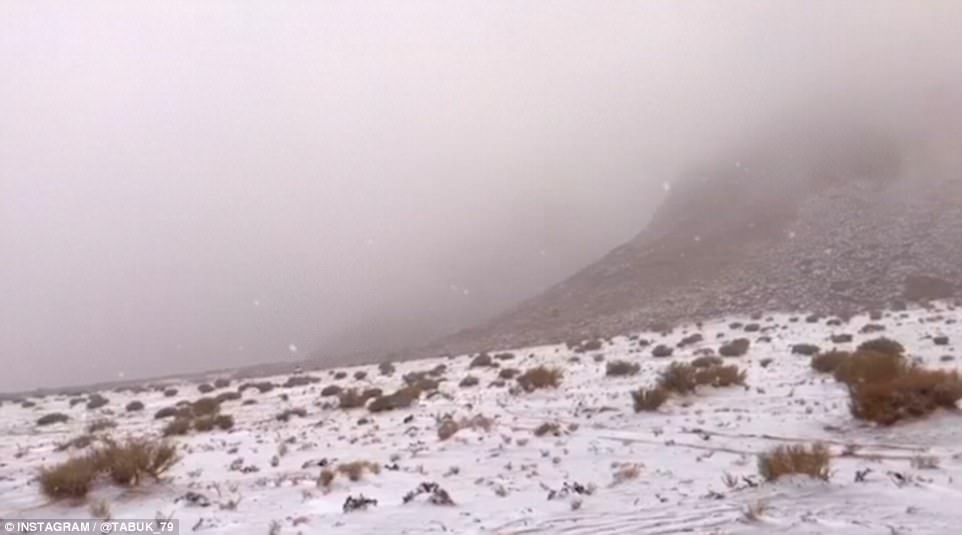 The usually sandy hills were blanketed in snow following the storm, which affected large swathes of the Middle East 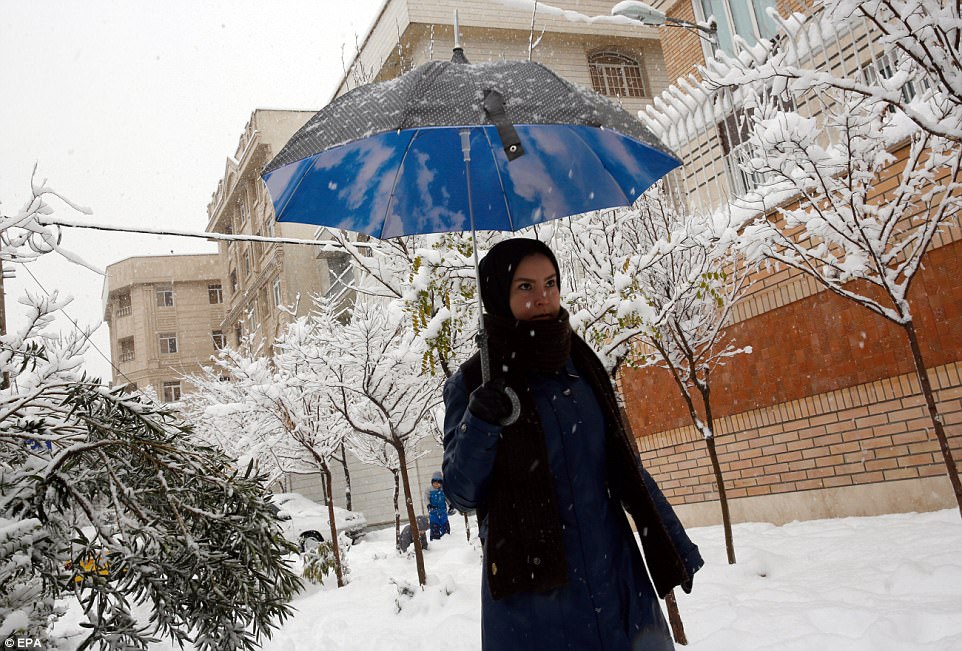 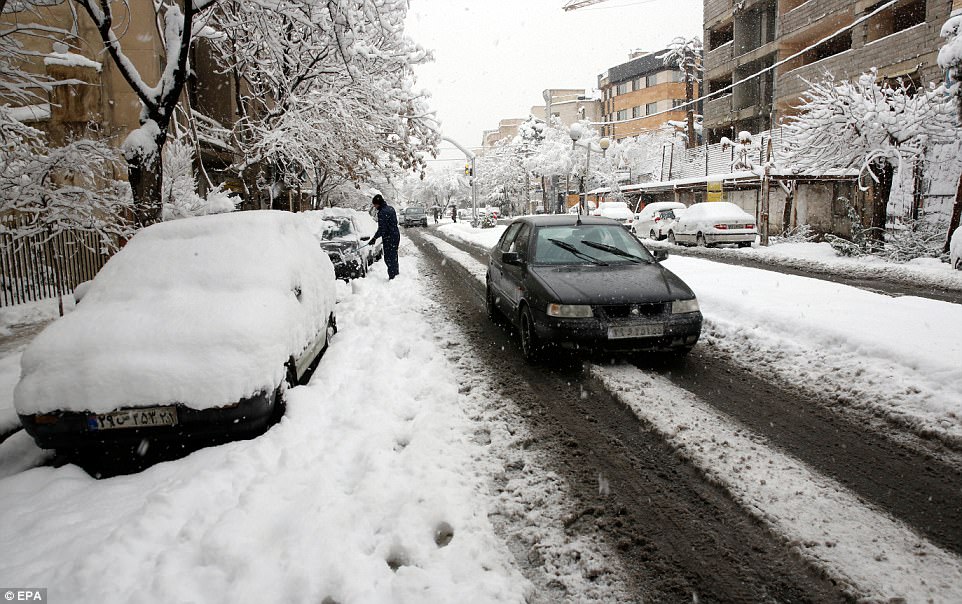 The surprisingly heavy snowfall led to chaos on the roads, with tricky conditions for motorists. There were also reports of electricity cuts in some parts of Tehran 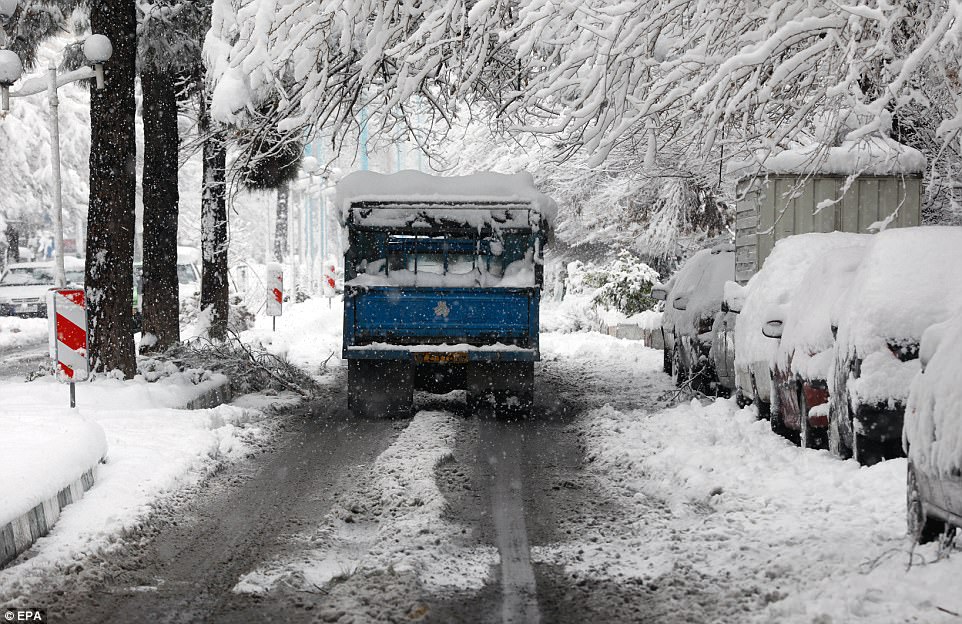 A truck was photographed carefully navigating the streets of Tehran, Iran, today after the country was blasted by days of snow that led to airports and schools being closed 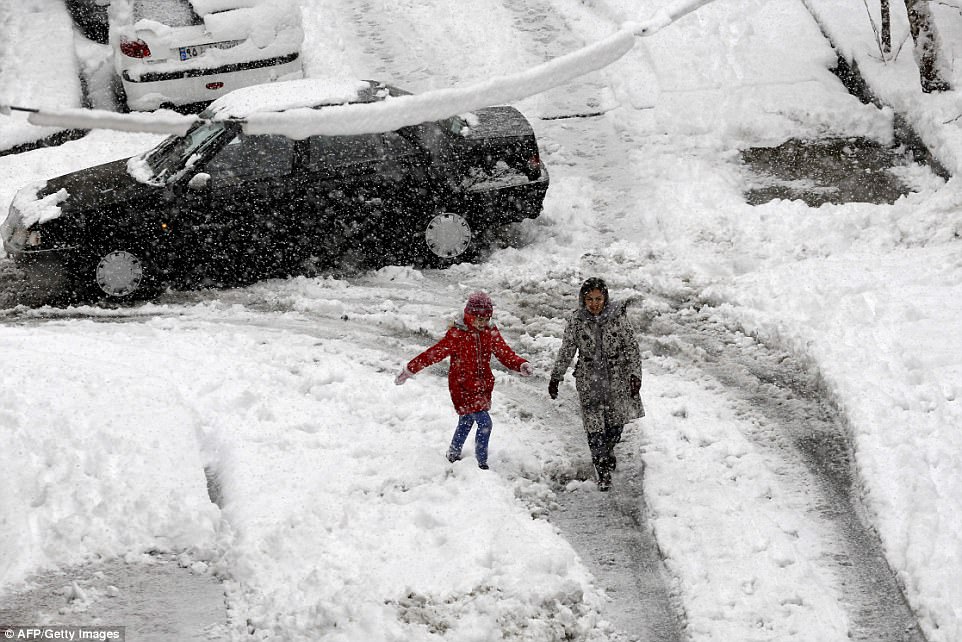 And there were so many visitors, local police and border officials were called in in case of emergency, with roads and motorways packed with traffic.

This is not the first time this month snow has fallen in unusual places.

Up to 16 inches of snow fell on the Sahara desert after a freak winter storm hit the area in the beginning of January.

The desert experienced snow for only the third time in 40 years.

The Sahara Desert covers most of Northern Africa and it has gone through shifts in temperature and moisture over the past few hundred thousand years. 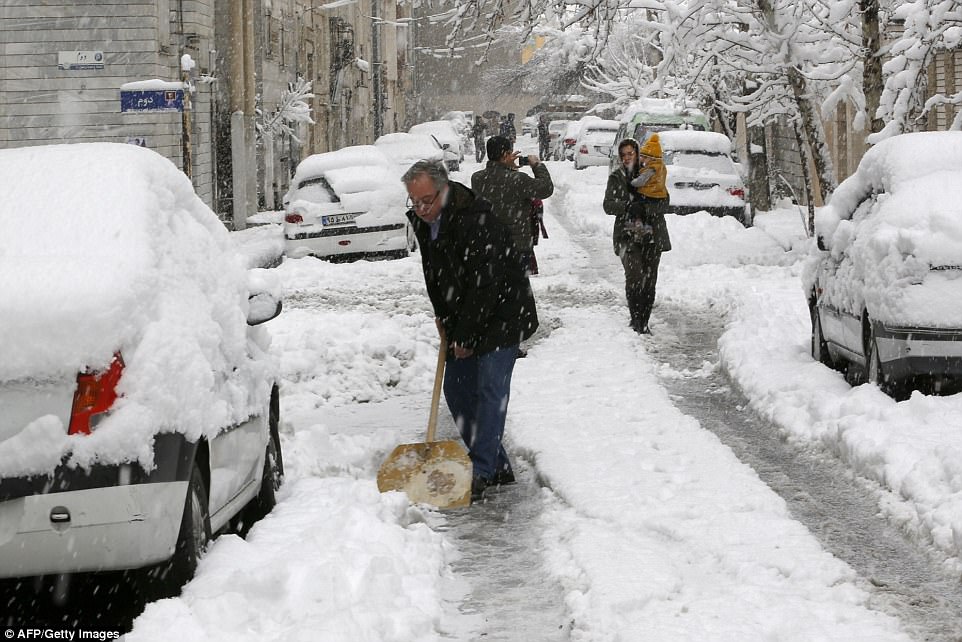 The deep snow left it almost impossible to drive in some areas of the Iranian capital and one man was pictured shovelling snow. Around 20 provinces in the west and north of Iran were affected by the snowfall 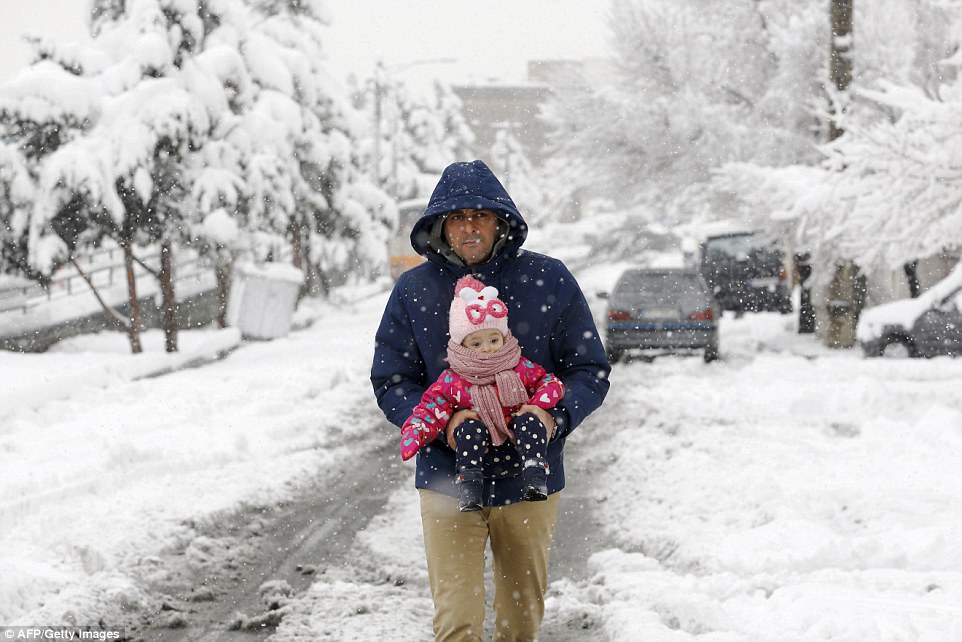 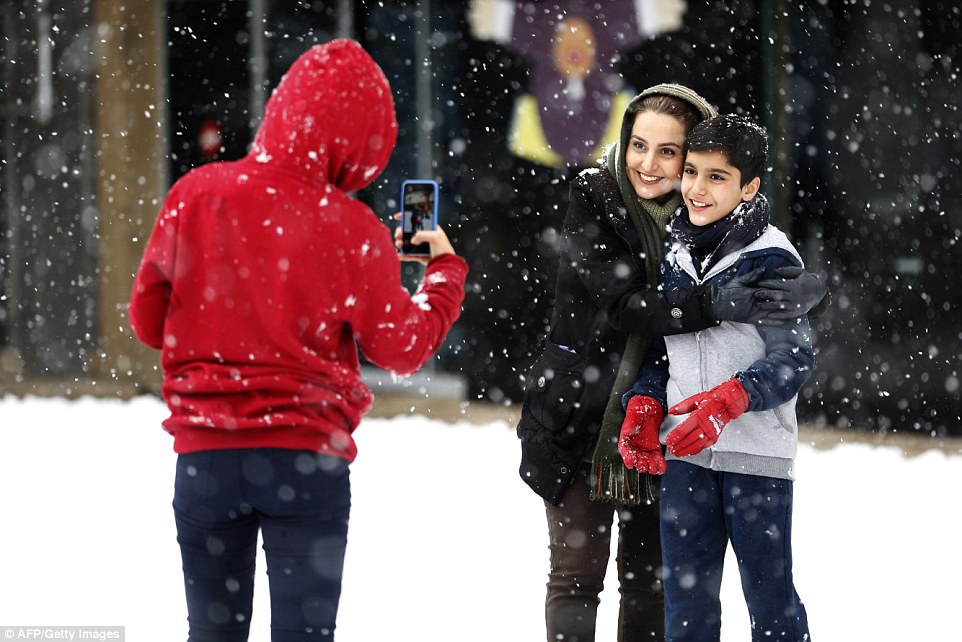 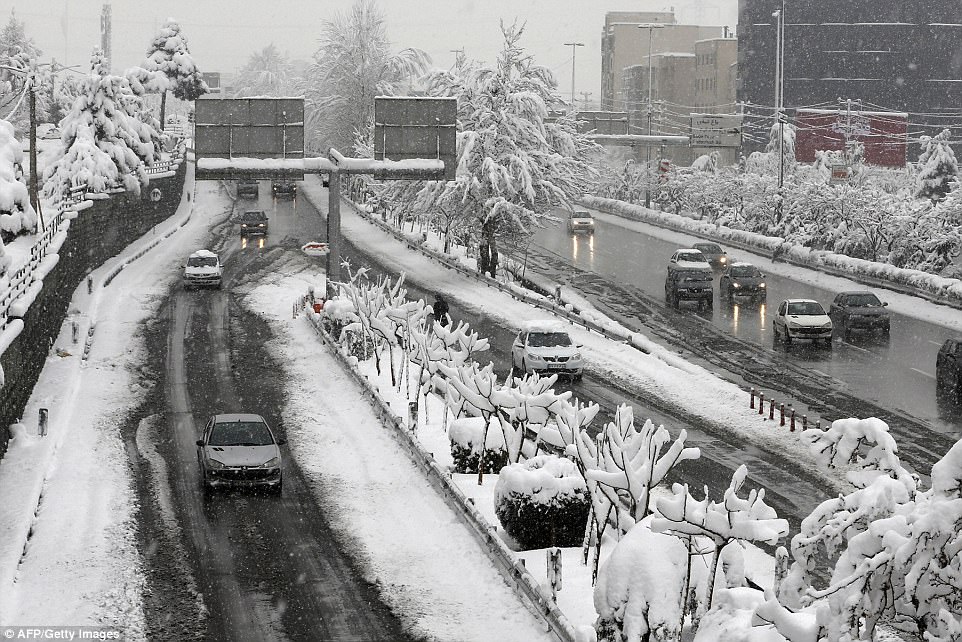