Wisconsin couple arrested for having sex in a car

A couple were arrested in Wisconsin after an officer found them having sex in the backseat of a parked car and they refused to stop.

Bailey Puttkemery, 21, and Emily Scott, 20, were arrested for engaging in lewd and lascivious conduct on Monday morning.

A La Crosse resident called 911 at around 3.30am to complain that she heard moaning coming from a car parked near her home.

An officer responding to the call located the vehicle and noted that the windows were fogged and that it was rocking.

Puttkemery and Scott were discovered having sex in the car’s backseat. 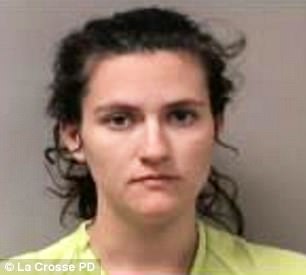 Bailey Puttkemery, 21, (left) and Emily Scott, 20, (right) were arrested on Monday morning in La Crosse, Wisconsin, when an officer discovered them having sex in the backseat of a parked car

The cop directed the naked couple to cease copulating and get dressed.

After five minutes passed and the two had not exited the vehicle the officer opened the car door and found that they had resumed having sex.

Puttkemery allegedly accused the officer of ‘c**kblocking’ him and tried to shut the car door in the cop’s face.

Standing outside of the car naked, Puttkemery tried to explain his behavior: ‘You’re a man. You should understand. It’s Oktoberfest weekend.’

Puttkemery was also charged with disorderly conduct on top of the lewd and lascivious behavior.

Both alleged offenders are being held in the La Crosse county jail in advance of a court hearing expected to take place Tuesday, according to the La Cross Tribune.