Wisconsin safety is ejected for brutal hit on Michigan quarterback

A Wisconsin safety has been ejected for a brutal hit on Michigan quarterback Dylan McCaffrey that stunned onlookers.

After Michigan fell behind 28-0, the team’s starting quarterback Shea Patterson was pulled and McCaffrey, a junior, entered the game late in the second quarter on Saturday in Madison, Wisconsin.

With 2:32 left in the third, Wisconsin safety Reggie Pearson blasted McCaffrey, the younger brother of Panthers running back Christian McCaffrey, with a shoulder to the helmet.

Wisconsin linebacker Jack Sanborn (57) tackles Michigan quarterback Dylan McCaffrey during the second half of Saturday’s game. McCaffrey was taken out with a concussion on a separate play, which is not pictured

Pearson was for targeting, ejected and will miss the first half of Wisconsin’s game next week against Northwestern.

Wisconsin safety Eric Burrell was also called for targeting and ejected in a hit on McCaffrey just two minutes prior.

Patterson returned under center after McCaffrey’s two hits and the backup play caller was assessed for a concussion in the locker room. 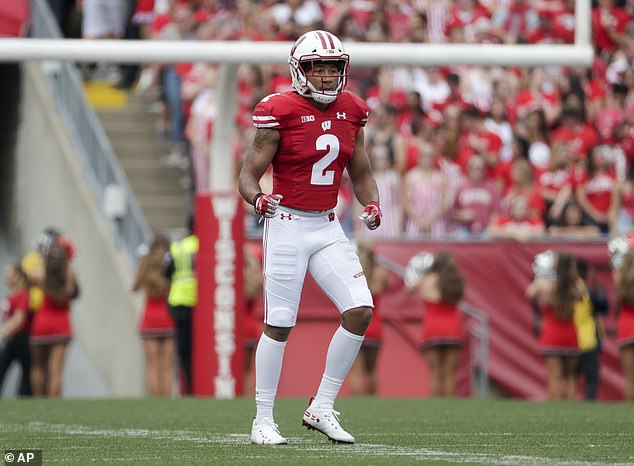 After the game, Michigan coach Jim Harbaugh said McCaffrey had a concussion, but that it was ‘clearing up for him.’