A property developer claims he was forced to spend thousands to dispose of fly-tipped asbestos after council workers refused to remove it.

The 45-year-old then realised that the sheets, which had been dumped on a site where he intends to build 10 flats, contained the potentially killer asbestos.

He contacted North Lanarkshire Council, who told James that he would have to dispose of the asbestos himself because it was found on his site.

The furious developer said the council ‘didn’t care a jot’ that he then had to fork out ‘thousands’ of pounds to have the asbestos disposed of properly.

Mr Hayes is now appealing for any witnesses, or anyone in the area who mayhave had a large demolition or roof refitted, that may be able to identify the workmen behind the fly-tipping.

Between 1907 and the 1980s, corrugated asbestos sheets were used in the roofing and siding of all types of buildings – especially in factories and farms – because it was a cheaper alternative. 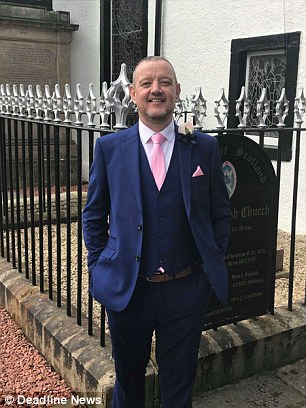 However, the toxic fibres in asbestos still kill around 5,000 workers each year and around 20 tradesmen die each week as a result of past exposure.

Mr Hayes posted the pictures of the fly-tipped corrugated sheets to Facebook in a bid to hunt down the culprits who left him out of pocket.

He wrote: ‘This time I am looking to see if anyone in or around the North Lanarkshire area knows of anyone, or it might be themselves, who have employed someone with a white Mercedes van to remove this.

‘It could have been from a demolition job, taking down an industrial unit or anything at all that will help find the people who have done this to my site.

Referring to his wife, he added: ‘Me and Ruthie work hard for what we have and for some c*** to think they’re going to get away with this is not on.’

At least twelve individually wrapped piles of corrugated sheeting can be seen dumped in a large pile on his development site.

The Health and Safety Executive (HSE) say that asbestos waste must be packed in ‘UN-approved packaging with a CDG hazard label and asbestos code information visible’. The sheets, which had been dumped on a site where he intends to build 10 flats, contained the potentially killer asbestos

According to the HSE the sheets should have been double wrapped – the first layer with a red bag featuring visible asbestos warnings, and additionally a clear outer bag.

Mr Hayes said: ‘Someone has paid those workers a lot of money to dispose of that asbestos properly, and it’s absolutely disgusting what they’ve done with it.

‘It was dumped on my site on Tuesday, and when I discovered it I called North Lanarkshire council.

‘When I told them what happened, they basically told me that I had to dispose of it myself because it was found on my property.

‘I was furious, and gave a bit of an extreme example. I said to them ‘So if someone committed a murder on my land and chucked the gun over the fence, I would be liable to dispose of it?’

‘They just laughed and said ‘No, of course not’ but they didn’t get my point and they refused to come and remove it. 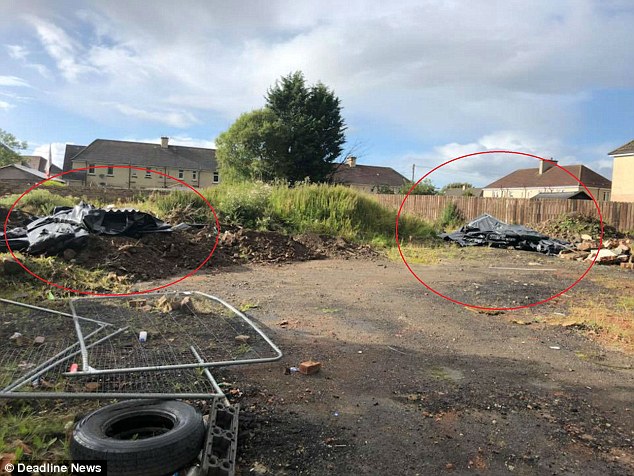 ‘I also told them about other sites where I know similar waste has been dumped, but they don’t care. They don’t care a jot.’

Asked how much the corrugated sheets cost to have disposed of, James replied: ‘I don’t want to disclose the full amount, but it was in the thousands. It is not cheap to get rid of, which is probably why they dumped it.’

He added: ‘I think it’s come from a farm or a big barn, something like that. That’s a complete guess, but going by how much of it there was and what it was like, I would bet money on it that it was a barn.’

A spokeswoman for North Lanarkshire Council said: ‘We were advised of the material dumped at Bonkle Road last week and letters were sent to the land owners.

‘It is the responsibility of land owners to remove any fly tipping from their land; the council is responsible for fly tipping on its own land.

‘Fly tipping is a crime and the council will investigate and prosecute those responsible.

‘Individuals face a fixed penalty notice of £200, and for businesses the fine increases to £40,000 and/or two years in prison. If anyone sees incidents of fly tipping, they can report it to the council on 01698 403110, giving details of the vehicles and people involved.’

Earlier this month, an investigation was launched after a number of asbestos sheets were found fly-tipped in Cowling, North Yorkshire.

The waste was found abandoned in a car park and council workers had to arrange for a specialist company to remove the waste due to the toxic fibres in the material.