Freddie Lucas is just 16, but he is already a seasoned fisherman on the Latney Star, a two-man boat he crews with his ‘skipper’, and one of about 25 berthed on the shingle on Hastings seafront.

The weather-worn hull of his little vessel sits in the shadow of the tall, tarred, wooden net huts that line the foreshore in front of the Old Town, an area beloved by the trendy middle classes who have grown sick of London.

In its Victorian heyday, the seaside resort was one of the most fashionable in the country. It was the setting for the TV drama Foyle’s War and, even today, retains in places a certain old-world charm.

It was an unlikely setting for the events that Freddie saw take place on Good Friday.

The day was hot and still and the town nearly deserted when Freddie spotted a helicopter hovering above and the RNLI inshore lifeboat heading towards the beach, towing a dingy carrying about 20 migrants.

When they approached the shore, he says he saw three men jump into the water and try to get away.

Others made a run for it when they reached land, sprinting up the side of the steep (and dangerous) East Hill and along the edge of the cliffs above Rock-a-Nore beach, with the police in hot pursuit.

Another local out for a lockdown lunchtime stroll recalled how two of the migrants passed him — one of them running barefoot with his shoes in his hands.

He says the chasing officers asked walkers ahead of him: ‘Did you see any migrants running around up here?’ It is unclear whether they were eventually caught.

Two days later, the Border Force was in action again. In the broad daylight of Easter Sunday afternoon and in front of locals taking their permitted daily exercise along the seafront, a large group of people had gathered on the water’s edge, seemingly in contravention of the lockdown rule.

But the men in navy blue uniforms standing alongside the group were not police about to caution them for failing to observe social distancing, but officers from the Border Force.

‘There were loads of them,’ said a local who witnessed the event.

The large group turned out to be migrants — 29 men, women and children who had been intercepted crossing the Channel in a life-raft and an RHIB (rigid-hulled inflatable boat) by Border Force officers and who were now being processed. 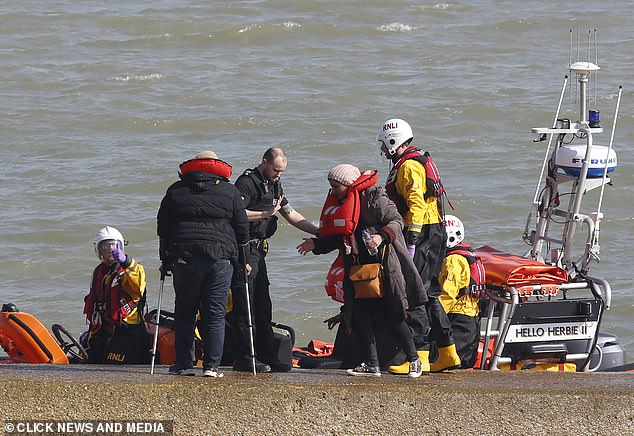 Border Force officers intercepted the migrants, who had come from the ‘Jungle’ refugee camps in northern France, as they crossed the channel

They had come from the ‘Jungle’ refugee camps in northern France, where there are fears of a coronavirus outbreak, and had to be handed face masks before being medically assessed and interviewed.

You will no doubt have read about such dramas many times before, but mostly farther along the coast in Kent, just less than 22 miles from France.

Never in Hastings, East Sussex, 40 miles away from France and twice the distance of the Calais-Dover route favoured by opportunist people-smugglers.

Yet what happened on Easter Sunday was not an isolated incident. Such stories have become almost commonplace in the past few weeks — only two days later, for example, a similar scene unfolded on the other side of Hastings Pier.

Migrants came ashore in the heart of the town in plain sight, not on a stretch of deserted coastline that is hard to patrol.

Home Office figures show that in April alone, at least 336 migrants have made the treacherous trip from northern France across the world’s busiest shipping lane, the highest total logged for months. Many ended up in Hastings.

The migrant phenomenon has had a visible impact on the town (which had a population of 93,000 in the last census). 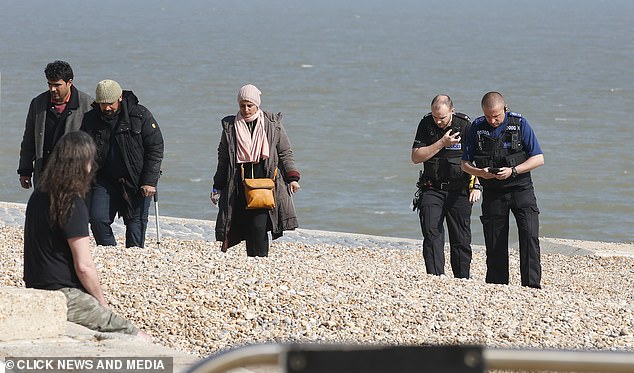 Border Force officers were patrolling the car park overlooking the sea at Rock-a-Nore when I went to Hastings last week, and a patrol boat combed the sea off the promenade. A helicopter hovering overhead has become a more familiar sight.

Why Hastings, though, and why now? There may be several reasons.

Patrols along the French coast have doubled and drones have been deployed under a crackdown launched by the British and French authorities in October, which has led to fears that gangs are now targeting new Channel routes.

This has coincided with the inhabitants of the makeshift camps around Calais and Dunkirk (mostly Iraqis, Iranians, Syrians and Afghans) being moved to accommodation centres because the number of Covid-19 cases there is rising.

But the transfer is not happening quickly enough, say volunteer organisations — so more migrants, it is suspected, are choosing to head for the UK; a trend that tallies with Home Office figures.

Another factor, it is thought, is the weather. The prevailing winds across the Channel are southwesterly, but over the Easter weekend they were southeasterly, so flimsy migrant boats may have been blown off course towards the East Sussex coast.

Whatever the reason, the wave of migrants arriving in Hastings was unrelenting.

Before I visited the town, I arranged to speak to Paul Joy, who has been a fisherman in Hastings for nearly 50 years. He is also chairman of the Hastings Fishermen’s Protection Society, which has offices near the RNLI station at Rock-a-Nore.

‘About 20 of them have just come ashore near the pier now,’ he revealed when he picked up the phone. ‘When their boat docked, they hit the beach (in the middle of Hastings) and ran towards Old Town. This is happening all the time.’

There is a theory that migrants welcome being caught crossing the Channel, as they are then given safe passage in, say, a Border Force cutter for the rest of their journey to Britain, where they can claim asylum.

‘Believe me,’ said a shopkeeper, who did not wish to be named, ‘the coastguards at Fairlight [farther eastward along the coast, towards the border with Kent] see them all coming in.

‘They want to be seen. They come within 200 metres of the shore and dump their outboard engine.’

That may be so, though I could not verify what he told me.

But clearly that could not have been the modus operandi of the migrants Paul Joy told me about, who landed undetected by the authorities, then scattered. It is not known if they were apprehended.

‘It is a bit of a worry,’ Mr Joy, 71, added, ‘because we know there is coronavirus in the French camps.’

How many other migrants may have made it to Hastings, escaping the attention of the Border Force, is impossible to say, though the number of documented incidents is telling.

On a single day — April 8 — for example, coastguards, Border Force officers and the police dealt with four separate incidents on this stretch of the coast, between Hastings and Rye.

More than 100 migrants that we know of have been detained — or possibly evaded arrest — in Hastings and the surrounding beaches in less than two weeks.

That number is even higher when you take into account the 20 or so migrants Freddie Lucas spotted on Good Friday.

Not far from where I was speaking to Freddie — from a safe distance — is the RNLI station. Behind the big red garage doors is one of the finest rescue vessels in Britain.

The state-of-the art Shannon-class lifeboat is propelled by water jets instead of propellers, allowing her to operate in shallow waters.

It was purchased from the £8.5 million sale of two Ferraris bequeathed to the RNLI by a millionaire businessman, Richard Colton (it is actually called the Richard and Caroline Colton lifeboat after him and his wife).

Some believe, however — rightly or wrongly — that it is not the job of the RNLI to rescue those trying to enter Britain illegally.

The controversy surfaced last year after a spate of migrant crossings off Kent. ‘I find the sight of RNLI vessels acting as unpaid Border Force patrol boats distressing,’ said one reader who wrote to us.

The RNLI in Hastings wouldn’t say whether they had been deployed in this capacity.

We already know from Freddie Lucas, however, that the inshore lifeboat towed in a migrant dinghy on Good Friday.

He also had footage on his mobile phone of the Easter Sunday drama, which shows that the Richard and Caroline Colton was called out.

One of the migrants was a little girl aged about four, which highlights the human tragedy behind the Rock-a-Nore incident.

The arrival of boatloads of migrants has split the town. One resident told me that, as she watched the Border Force process the 29 soaking wet migrants on Easter Sunday, there were calls for them to be sent back.

‘We don’t want them here,’ a man was heard shouting at the officers on the beach.

But others were more charitable. ‘I feel very, very sorry for them indeed,’ said one resident. ‘There were young children involved.

So it is that, especially in these dark times, the only business thriving in Hastings is the migrant-smuggling trade.