The death toll in a Mexican oil pipeline explosion jumped to 73 Saturday night, after a horror fireball engulfed a crowd gathering gasoline from an illegal pipeline tap, burned off their skin and reduced some bodies to ash.

On Saturday morning, forensic experts grimly attempted to separate and count charred heaps of corpses after the massive fireball erupted in a small town in the central Mexico state of Hidalgo.

Hidalgo Governor Omar Fayad said 73 people were killed and 74 people injured in the explosion, which happened as residents scrambled to get buckets and drums to a gush at the pipeline that authorities said rose up to 23 feet (7 meters) high.

Just a few feet from where the pipeline passed through an alfalfa field, the dead seemed to have fallen in heaps, perhaps as they stumbled over each other or tried to help one another in the moments after a geyser of gasoline shot into the air Friday.

Family members of a victim cry when recognizing the body of a loved one after an explosion in a pipeline belonging to Mexican oil company PEMEX in Tlahuelilpan, Mexico 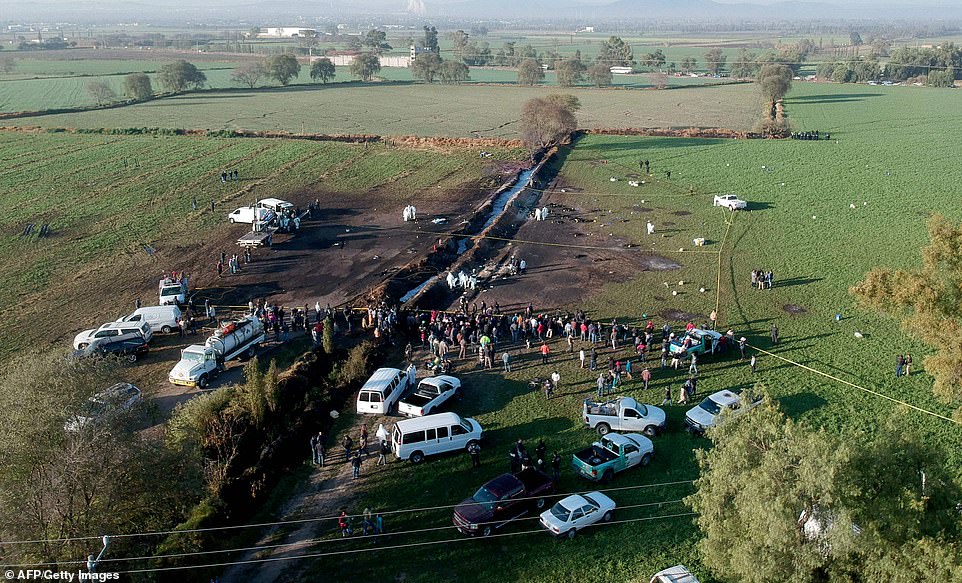 Aerial view of the scene where a massive blaze was triggered by an illegal pipeline tap in Tlahuelilpan, Hidalgo state 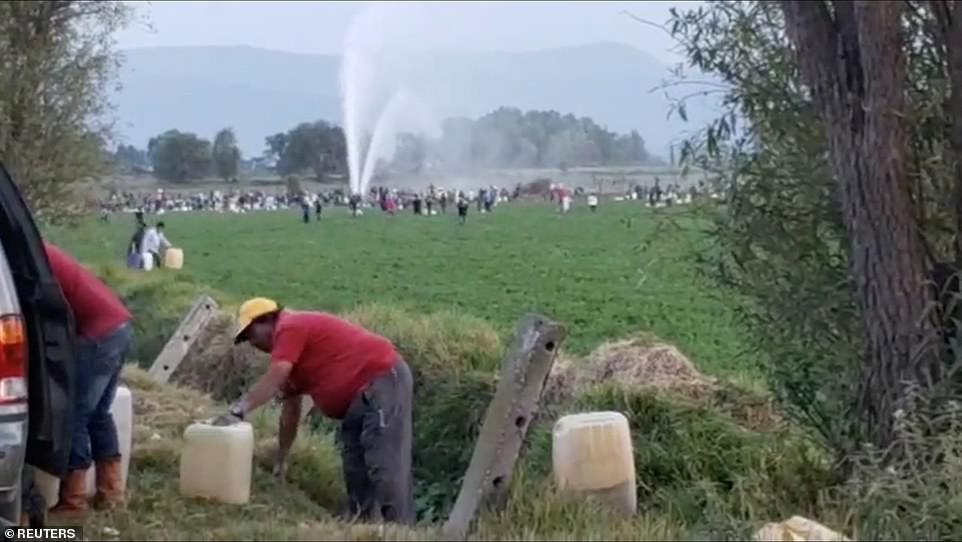 Hidalgo Attorney General Raul Arroyo said 54 bodies were so badly burned that they could take a long time to identify.

Local journalist Veronica Jimenez, 46, arrived at the scene before the explosion where she said there were more than 300 people with containers to collect fuel.

‘I saw families: mother, father, children,’ she told Reuters. ‘It was like a party…for a moment you could even hear how happy people were.’

When the blast hit, people ran in different directions, pleading for help, some burned and without clothing, she said.

‘Some people’s skin came off…it was very ugly, horrible, people screamed and cried,’ she said. ‘They shouted the names of their husbands, brothers, their family members.’

One witness described how an almost festive atmosphere among hundreds of local residents filling containers with spilled fuel turned to horror as the blast scattered the crowd in all directions, incinerating clothing and inflicting severe burns.

A number of people at the scene told Reuters that local shortages in gasoline supply since Lopez Obrador launched a drive to stamp out fuel theft had encouraged the rush to the gushing pipeline. 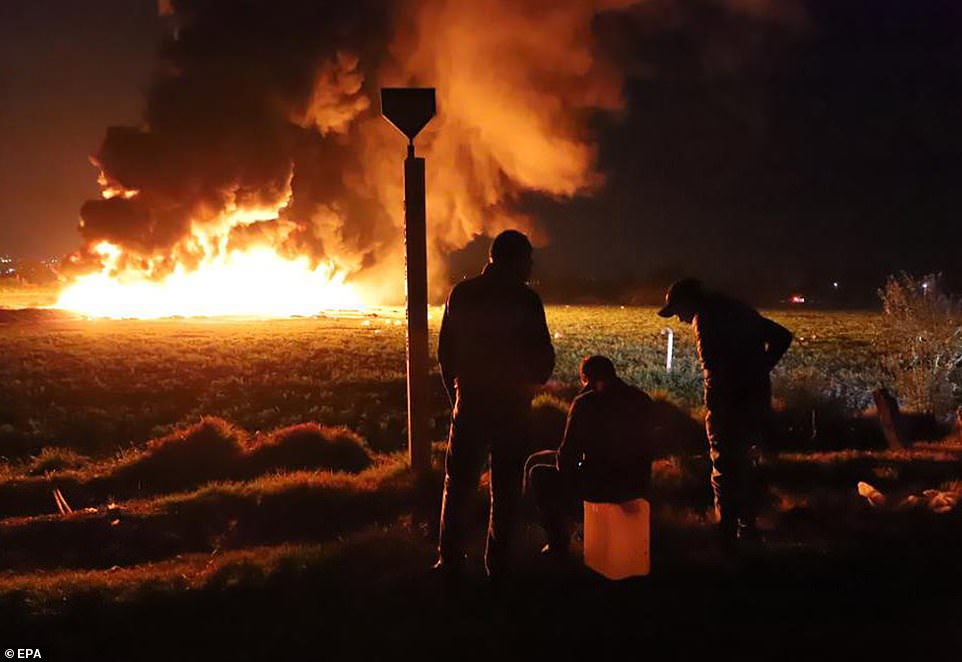 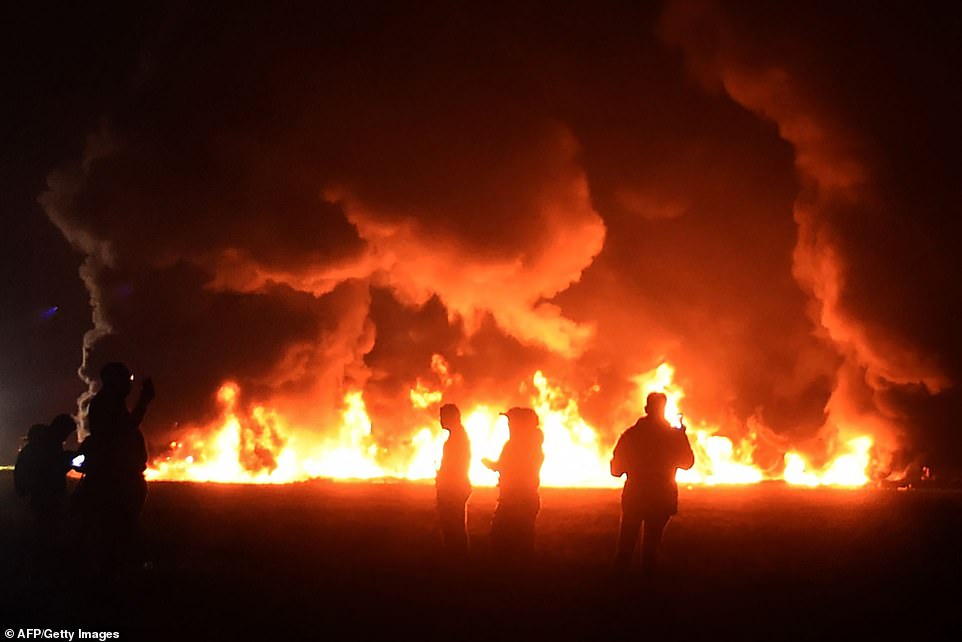 ‘Everyone came to see if they could get a bit of gasoline for their car, there isn’t any in the gas stations,’ said farmer Isaias Garcia, 50. Garcia was at the site with two neighbors, but waited in the car some distance away.

‘Some people came out burning and screaming,’ he added.

Health officials were taking DNA samples from direct relatives at the local community center in Tlahuelilpan to aid in identification. Outside, a long, chilling list of the missing was taped to a window.

Wrapped in a blanket, Hugo Olvera Estrada said he had gone to six nearby hospitals looking for his 13-year-old son, who had joined the crowd at the fuel spill. He hasn’t been seen since. 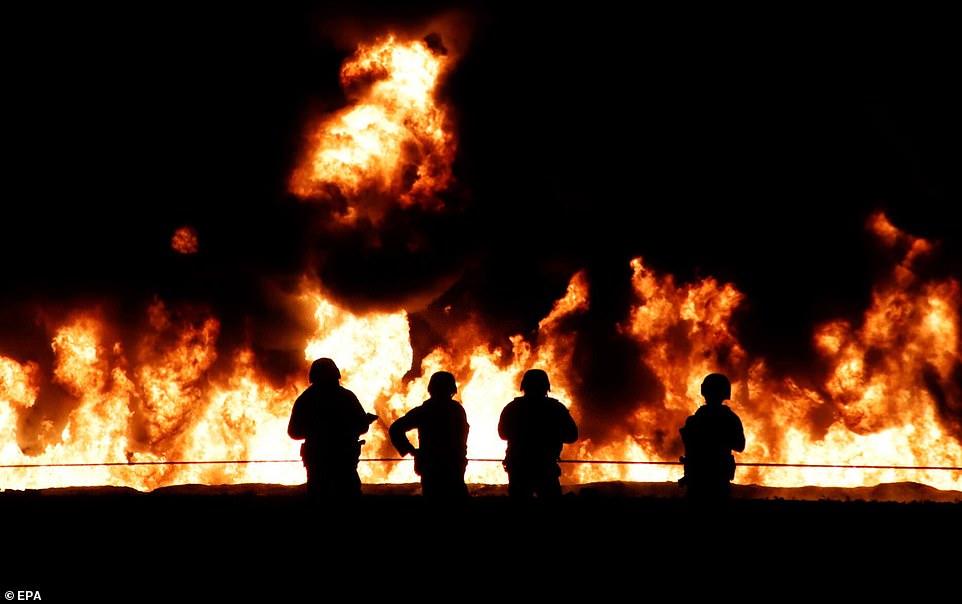 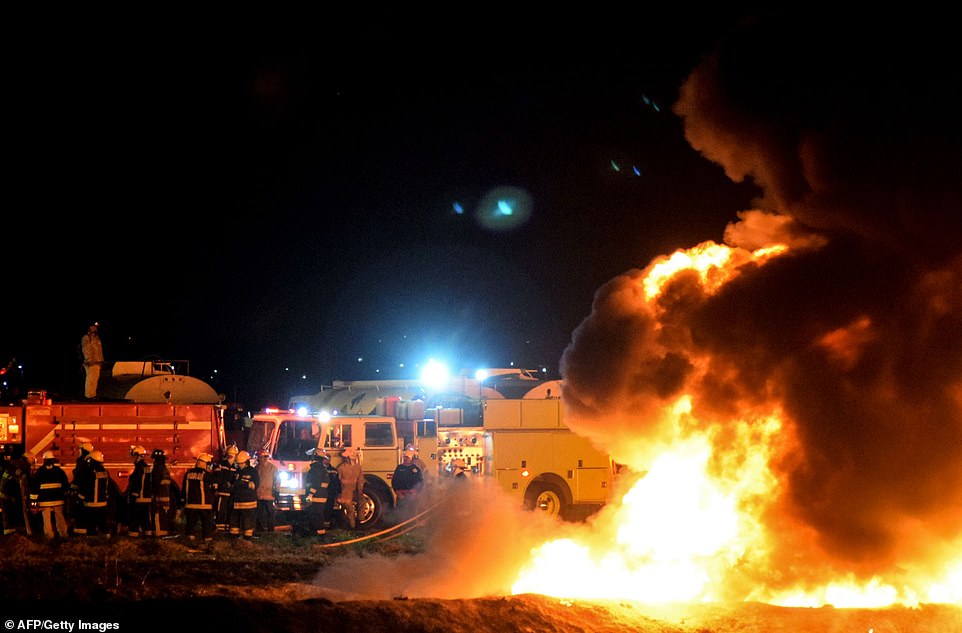 Firefighters are working at extinguishing the fire at the scene of a massive pipeline blaze in Tlahuelilpan, Hidalgo state 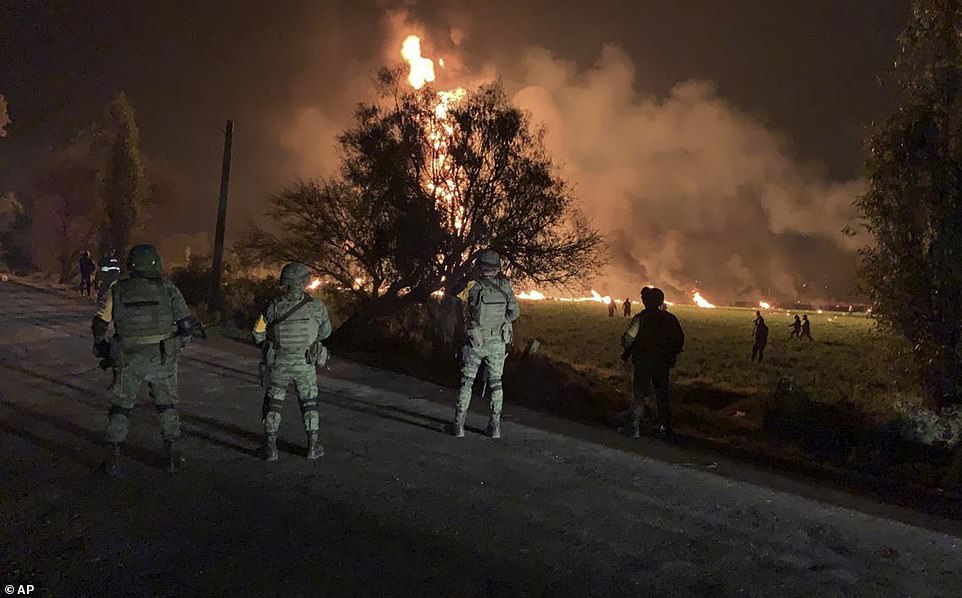 The leak was caused by an illegal pipeline tap in the small town of Tlahuelilpan, about 62 miles north of Mexico City, according to state oil company Petroleos Mexicanos, or Pemex.

Hidalgo state police said the leak was first reported at about 5pm Central.

Video footage from prior to the explosion showed dozens of people in an almost festive atmosphere gathered in a field where a duct had been breached by fuel thieves.

Two hours later, the pipeline burst into flames. The duct carries fuel, apparently gasoline, from the Gulf coast to the Mexico City area.

The government said soldiers reached the scene after Pemex detected the illegal tap, but could not secure the area before the explosion.

‘At some point there were too many people there and the army and military personnel withdrew to avoid problems,’ Public Security Minister Alfonso Durazo told broadcaster Televisa. ‘It was just as they were withdrawing that the explosion occurred.’

The soldiers had been ordered not to engage with fuel thieves out of fear that an escalation could result in the shootings of unarmed civilians or soldiers being beaten by a mob. 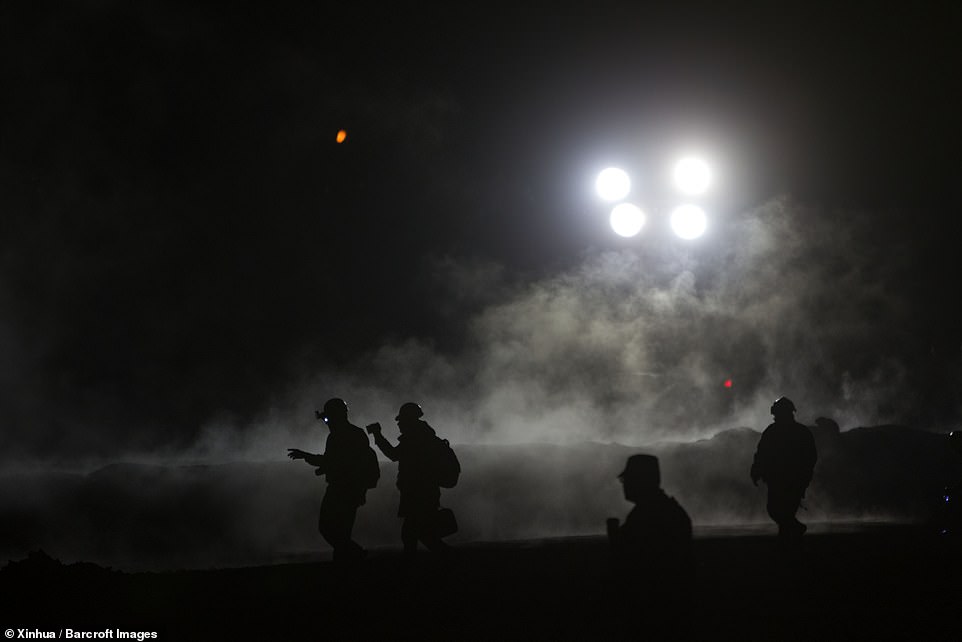 Members of the Mexican Army work at the site of a pipeline explosion in the municipality of Tlahuelilpan, Hidalgo state 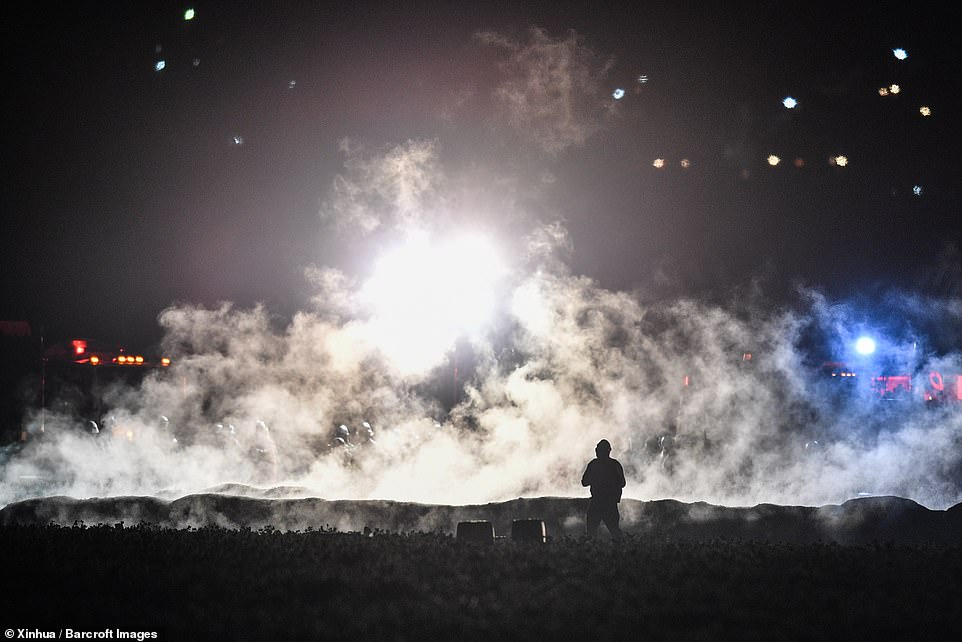 Rescuers work at the site of a pipeline explosion in the municipality of Tlahuelilpan, Hidalgo state, Mexico on Saturday 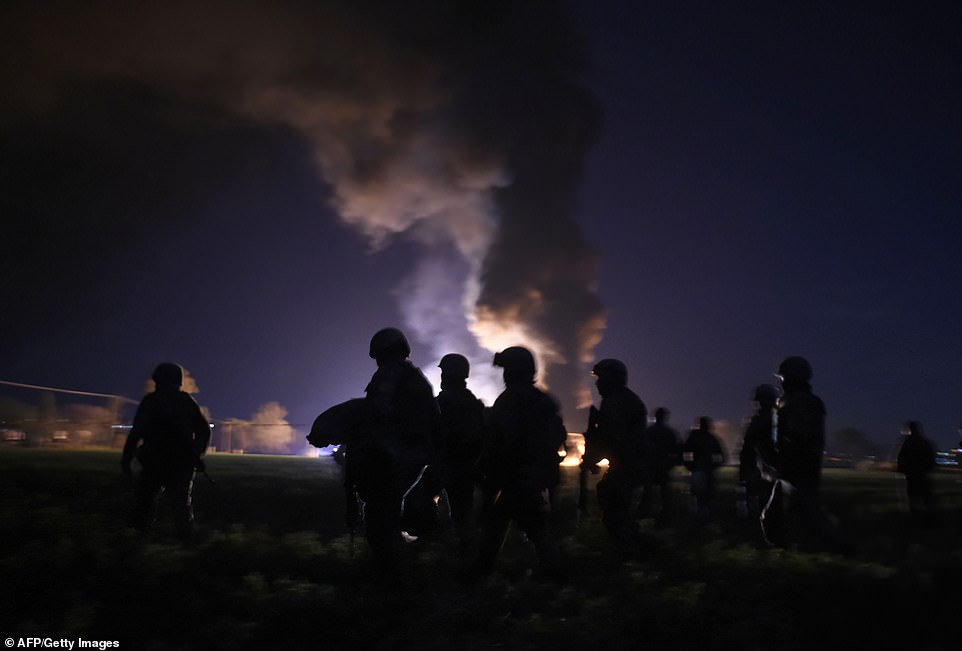 A local of Mexico’s Hidalgo state said civilians ignored soldiers’ warnings to stay clear of the geyser of gasoline before it exploded.

Perez said he returned Saturday to the scorched field where the massive fireball erupted at the illegal pipeline tap.

He tried to see if he could recognize any bodies, but only a handful of the remains still had skin. Dozens of corpses were burned to the bone.

Perez says he and his son also bypassed the soldiers Friday. But as he neared the spurting fuel, he was overcome with a sense of foreboding.

‘Let’s go,’ he recalls telling his son. ‘This thing is going to explode.’ The pair ran without looking back, he says.

Footage showed flames shooting high into the air against a night sky and the pipeline ablaze.

Screaming people ran from the explosion, some themselves burning and waving their arms.

On Saturday, several of the dead lay on their backs, their arms stretched out.

Some seemed to have covered their chests in a last attempt to protect themselves from the flames; another few black-charred corpses seemed to embrace each other in death.

Lost shoes were scattered around the scorched field, as were plastic jugs and jerry cans that the victims had carried to gather spilling fuel.

‘Ay, no, where is my son?’ wailed Hugo Olvera Estrada, whose 13-year-old son, Hugo Olvera Bautista, was at the spot where the fire erupted. Wrapped in a blanket outside a clinic, the man had already gone to six local hospitals looking for his child. 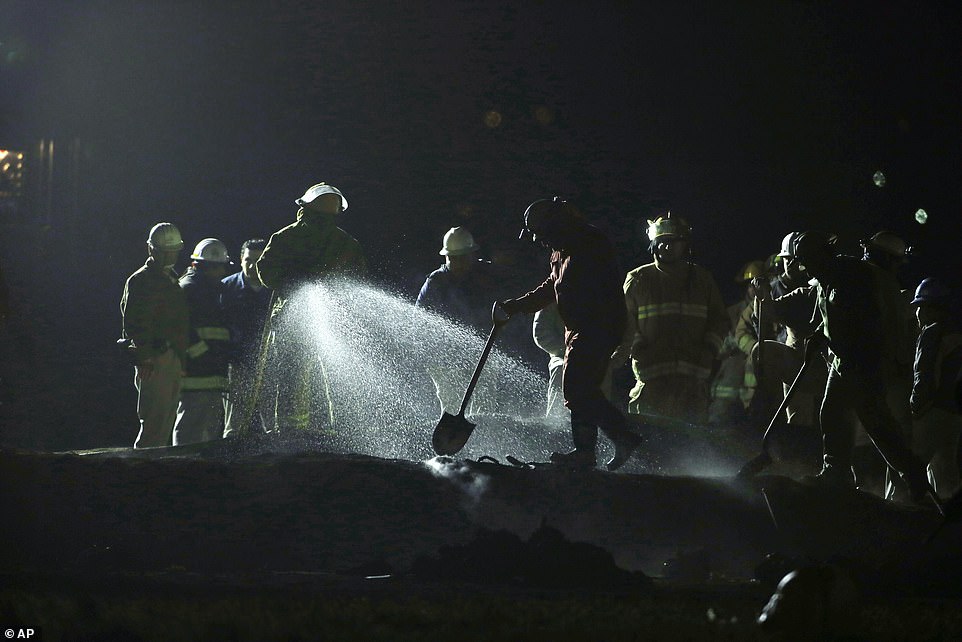 Staff of Pemex, Petroleos Mexicanos, works the area of a oil pipeline explosion in Tlahuelilpan, Hidalgo state on Saturday 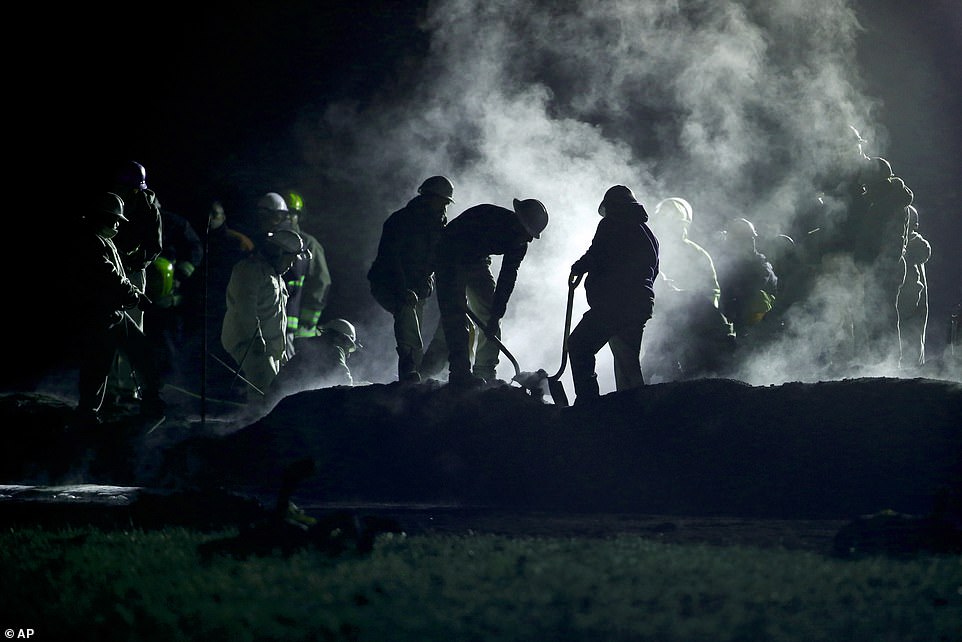 A massive fireball that engulfed people scooping up fuel spilling from a pipeline ruptured by thieves in central Mexico killed at least 73 people and badly burned others. Pemex staff are seen working the scene 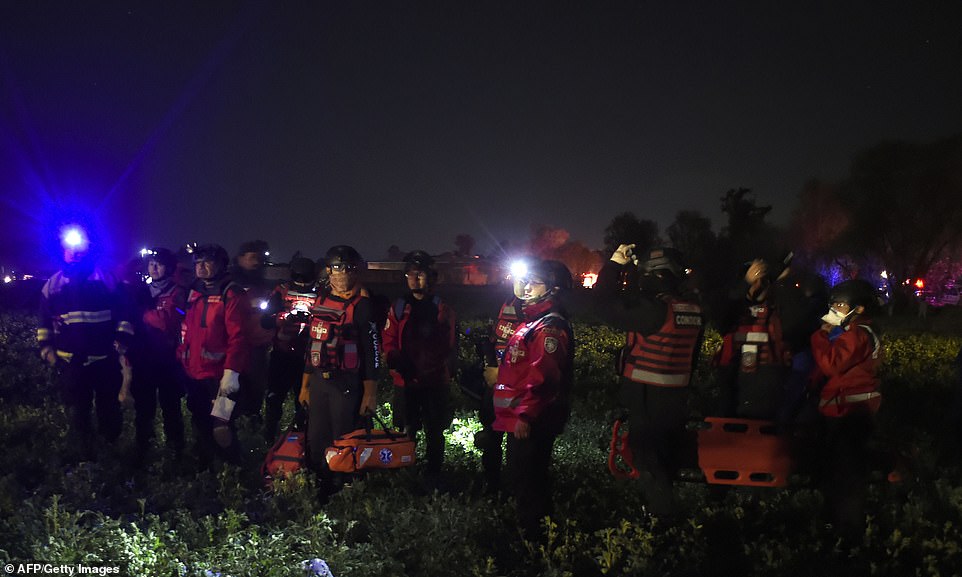 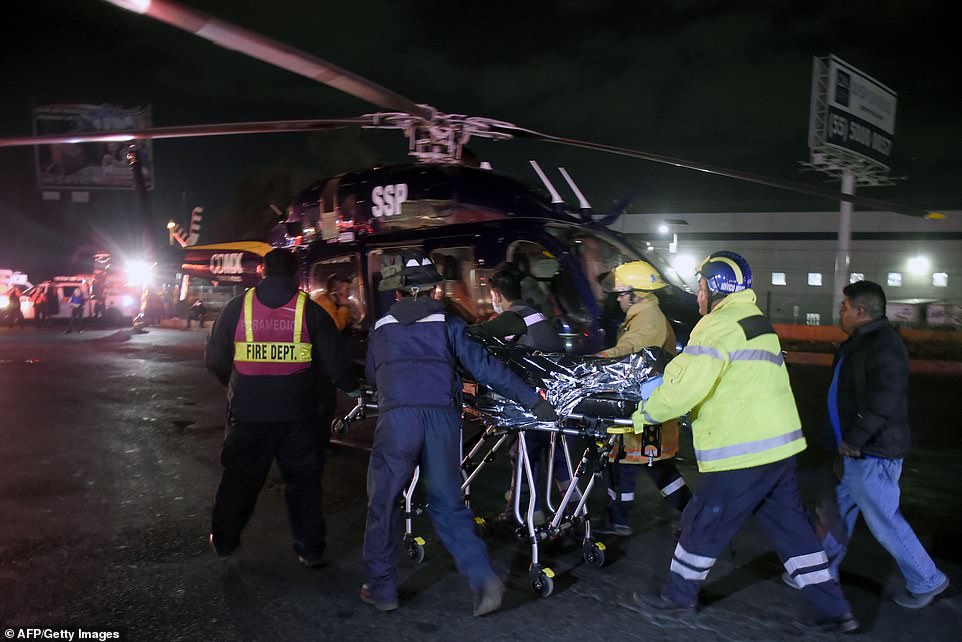 An injured person is transferred to a helicopter near the town of Tepotzotlan, after a leaking gas pipeline triggered a blaze

After returning home from middle school yesterday, his father recounted, the boy went to join the crowd scooping up gasoline. Olvera Estrada believed he was influenced by older and supposedly wise men from the town of about 20,000. ‘The older men brought him,’ he said.

The tragedy came just three weeks after new President Andres Manuel Lopez Obrador launched an offensive against fuel theft gangs that have drilled dangerous, illegal taps into pipelines an astounding 12,581 times in the first 10 months of 2018, an average of about 42 per day.

‘We are going to eradicate that which not only causes material damages, it is not only what the nation loses by this illegal trade, this black market of fuel, but the risk, the danger, the loss of human lives,’ he said. 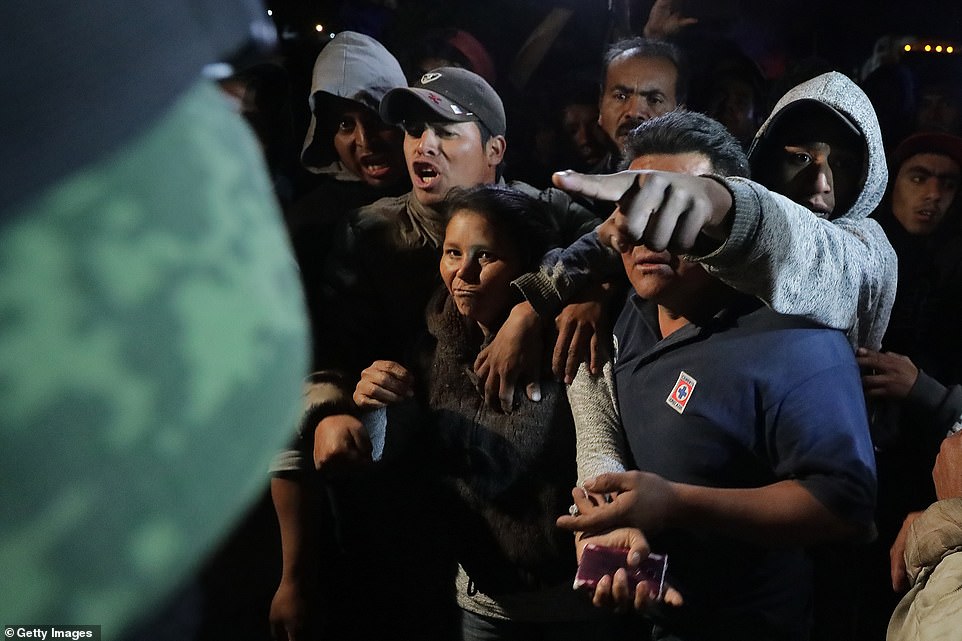 Villagers argue with the military to let them go to look for their missing relatives after an explosion in a pipeline belonging to Mexican oil company PEMEX in Tlahuelilpan, Mexico 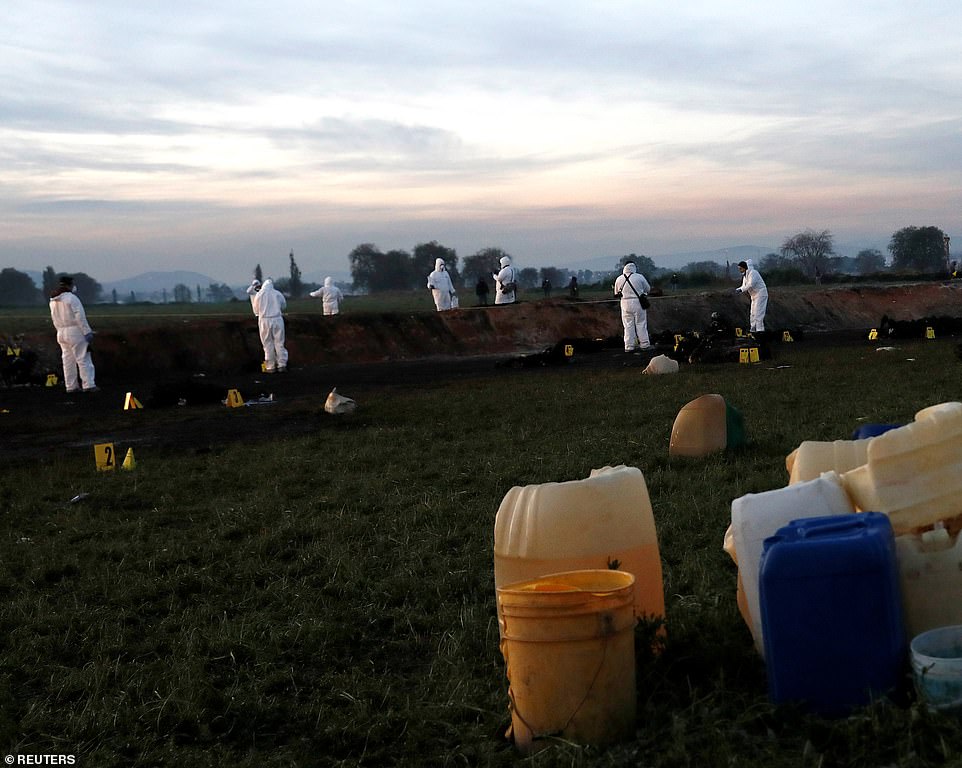 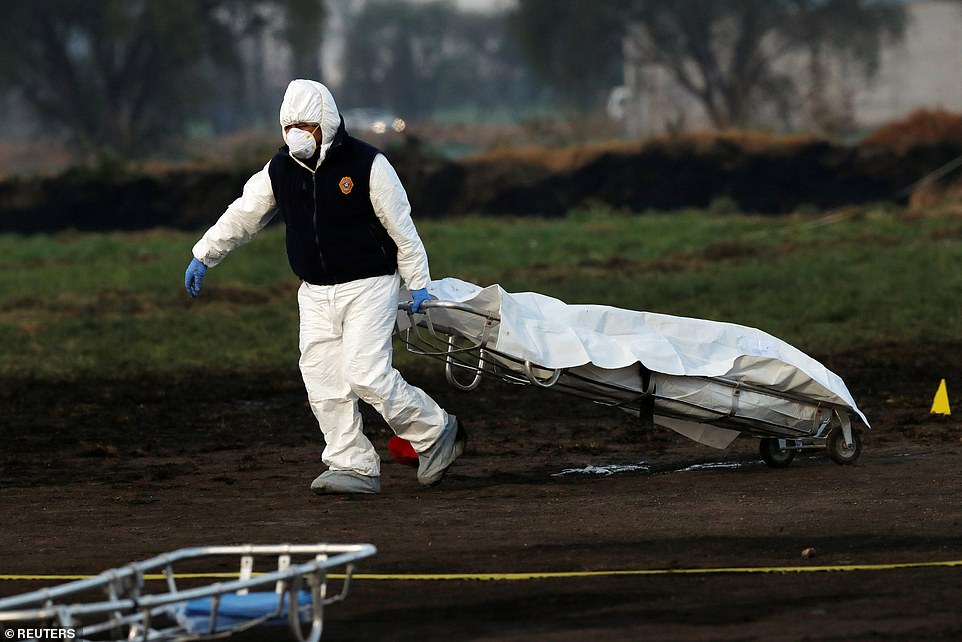 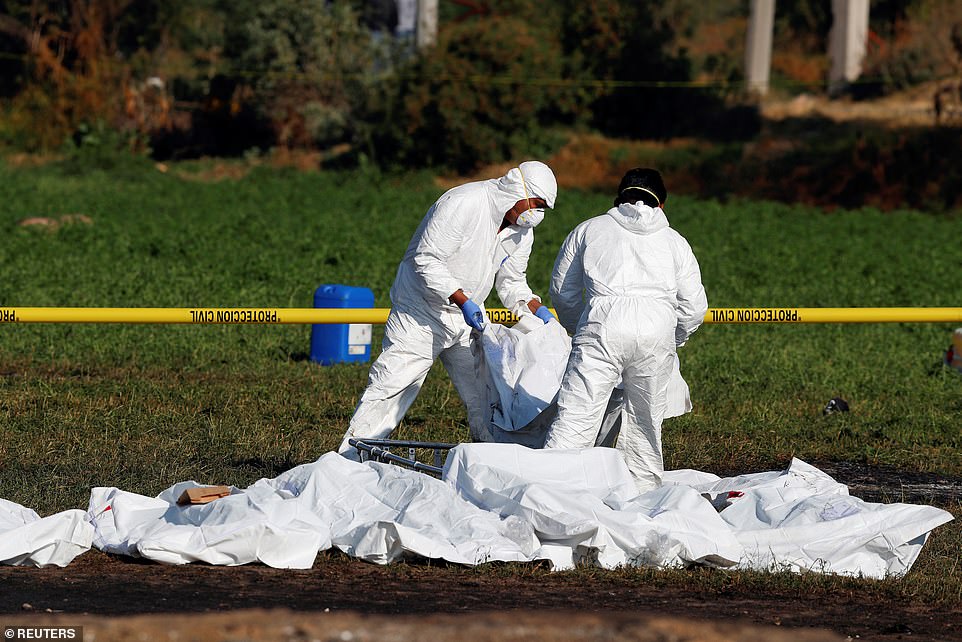 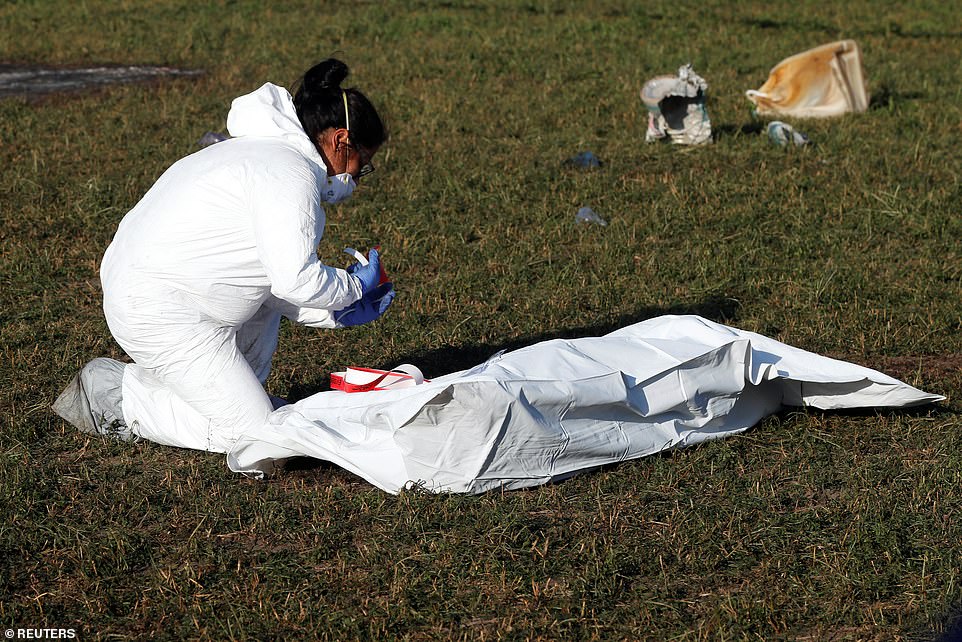 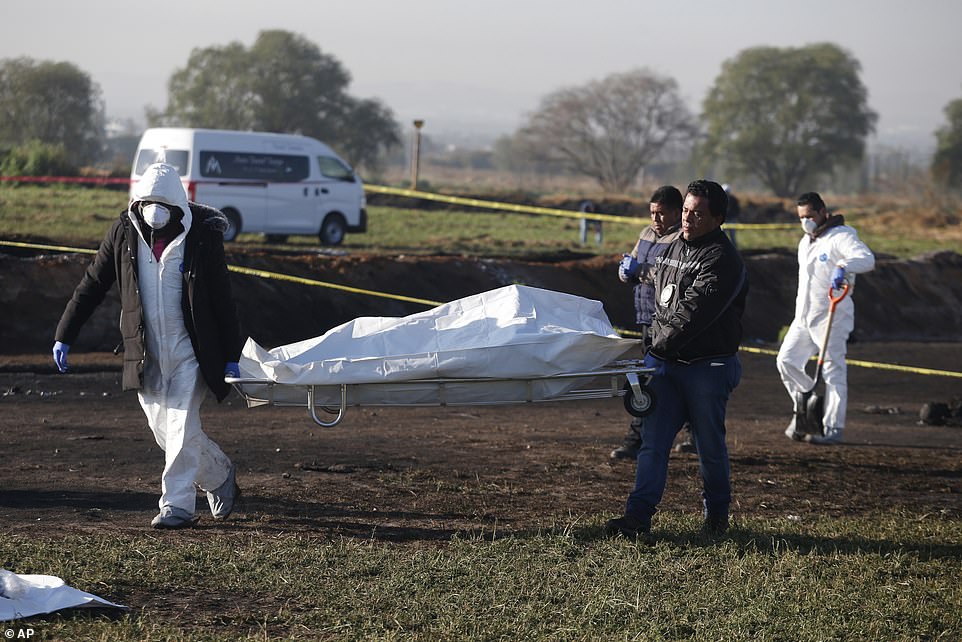 Forensic technicians grimly worked the scene on Saturday morning, tagging bodies and removing them from the area

The war against fuel theft was a theme repeated by people in Tlahuelilpan, which is crossed by pipelines and located just a few miles from a refinery.

‘What happened here should serve as an example for the whole nation to unite behind the fight that the president is carrying out against this ill,’ said municipal health director Jorge Aguilar Lopez.

Another pipeline burst into flames earlier Friday in the neighboring state of Queretaro as a result of another illegal tap. Pemex said the fire near the city of San Juan del Rio was ‘in an unpopulated area and there is no risk to human beings.’

In December 2010, authorities also blamed oil thieves for a pipeline explosion in a central Mexico near the capital that killed 28 people, including 13 children. 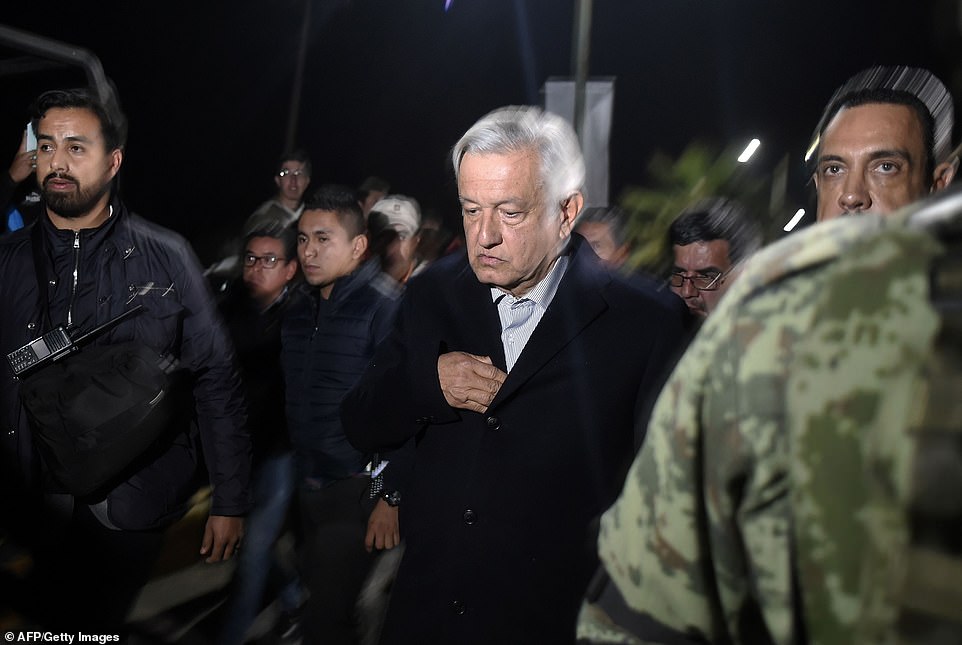 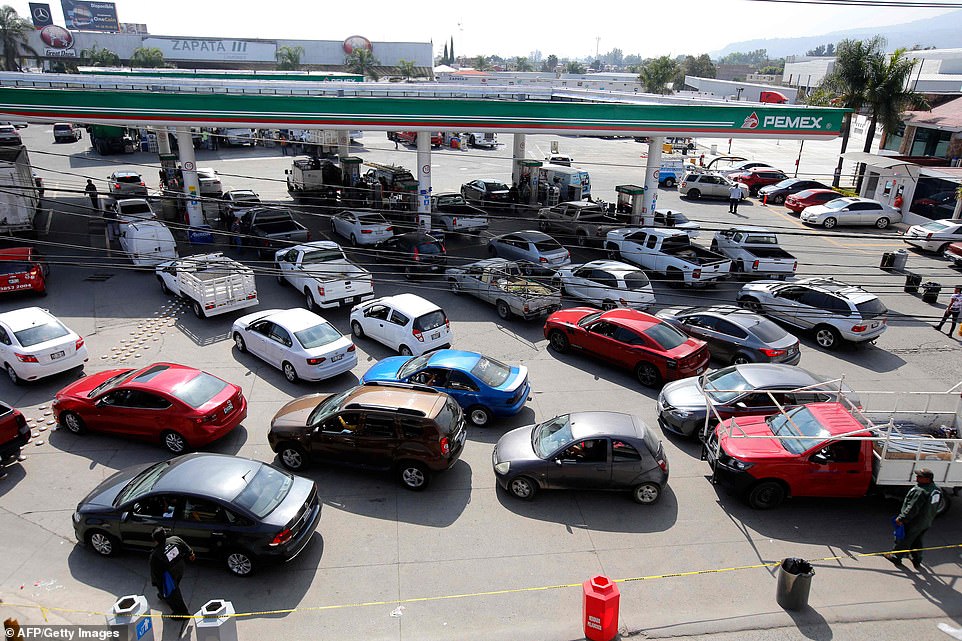 Obrador’s controversial government crackdown to fight fuel theft has led to severe gasoline and diesel shortages across much of the country. Seen on Friday, cars line up at a Pemex station in Jalisco state amid the fuel shortage

His administration also shut down pipelines to detect and deter illegal taps, relying more on delivering fuel by tanker truck. There aren’t enough trucks, however, and long lines at gas stations have plagued several states.

In Tlahuelilpan, a long, chilling list of the missing was taped outside the window of the local clinic, where dozens of relatives waited for news in their search for loved ones.

Marciel Cervantes fears his brother, Isaac Aurelio Cervantes, is among those lost in Friday’s blast. He found the 26-year-old’s car parked on the road next to the field, and said his brother hasn’t answered his cellphone.

‘The people already know what they’re getting into with this,’ he said as he wrapped a blanket tightly around himself against the cold. ‘But they don’t understand.’